A second chance at writing a competent review of the Zeiss 21mm lens. 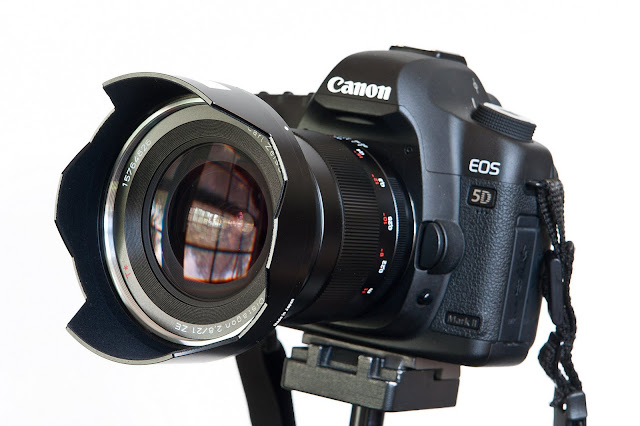 Several weeks ago I borrowed a 21mm Zeiss ZE lens

from the local Zeiss representative.  I'd been asked by a client to shoot interiors and equipment installations at a very private and very exclusive country club somewhere in central Texas.  I own a Canon lens but I'm all too familiar with its limitations.  I wanted to make really great images for this particular client and I thought the 21 Zeiss would do it for me.  Most of the images from that shoot were really good.  In fact, the art director said she could see a difference in quality and sharpness when she looked at the small images on the back screen of the camera.  I felt that the optic was very, very sharp but it a few of the images with bright light sources (sunlit windows especially) I saw too much flare.  Far more flare than I would have gotten with the Canon lens.  I wrote a brief paragraph or so on the blog and stumbled off to work on something else.  One afternoon my friend, Paul, who is a renowned architectural photographer, called to see what I thought about the lens.  I gave him my impressions and he said, "That doesn't sound right....do you mind if I take a look at it?"  I met him for coffee and handed the lens over.
Now, if most people questioned my judgement I'd take it with a grain of salt but Paul owns and uses the newest Canon 17t/s the 24t/s a bag full of Zeiss Biogons and other wide angles and just about every exceptional optic that's ever been pressed into the service of photographing the interior and exteriors of buildings.  Is he knowledgable?  Absolutely.  Lately Paul's upped his game by buying a complete Hasselblad MF digital system.  Five or six of their best lenses and a really nifty shift adapter. 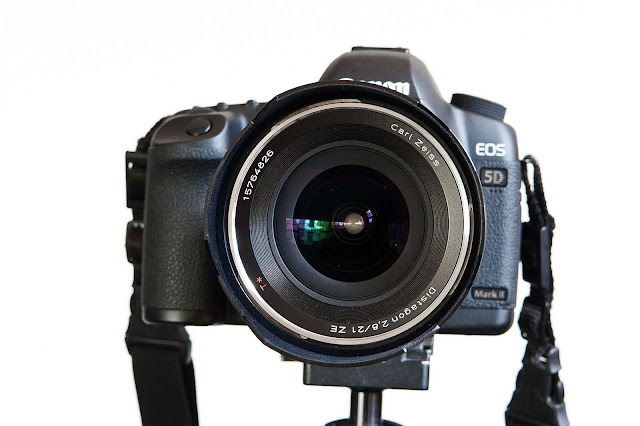 Paul was able to duplicate my flare results.  We met at my studio to shoot some additional comparisons.  As we were putting the lens on the front of a Canon 5dmk2 Paul put on his reading glasses and looked carefully at the front of the lens.  There were two small spots on the front element.  Could have been water marks.  Or dried spit.  Or some outer space goo.  But we're talking maybe one or two millimeters in diameter, tops.  And quite transparent.  Paul wiped out a cleaning cloth and ministered to the front element.  Minutes later we were shooting amazing tests with absolutely none of the flare I'd seen previously.  As Paul explained (and I should have known) flaws on the lens surface are magnified with wide angle lenses.  It's imperative to keep the front element cleaned.  Does that mean hanging a filter on the front?  Absolutely not......but that's fodder for another post. 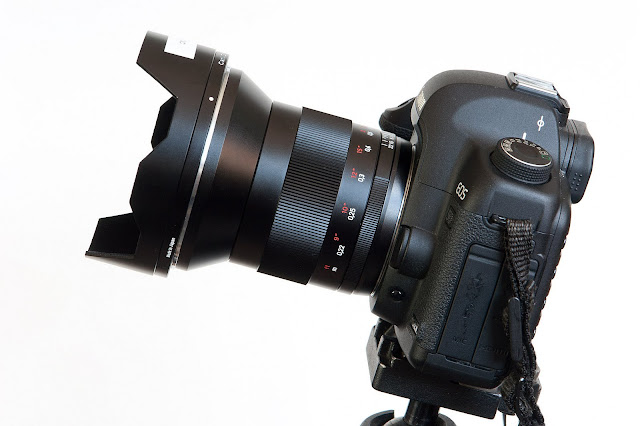 My next tests were night and day.  The lens performed the way Paul and I expected it would.  By f.5.6 it was sharp and detailed and bright in a way that zoom lenses and my 20mm Canon wide angle can never match.  The distortion is well controlled and there is a profile of this lens and most of the Canon pro cameras in the Camera Raw panel in both PS CS5 and in Lightroom.  That extra nudge from the profile makes the geometry pretty much perfect.
The lens is both heavy and slow to focus.  Slow because you'll be doing it manually and it's harder to see the in and out of focus as easily with a wider angle optic.  The discrimination between zones of sharpness is less obvious.  But the way I used this lens was to put it on a tripod and use the magnifier in Live View with the Canon body.  Many decry the addition of live view as a gimmick or a "feature" that adds extra complexity and cost to a camera but Paul and I find that, for architecture and other carefully considered uses, the Live View transforms most cameras into miniature view cameras with most of the control that implies.
If I were to use the lens for traditional (I'll take the picture without telling anyone and I'll try not to get caught) street photography I would rely on zone focusing it and depending on the wide depth of field that results.  It's not a lens you whip up to your eye and whip into focus quickly.
The summation?  It's at least two levels of magnitude better than the Canon 20mm.  It's better at 21mm than any zoom I have used.  That includes the Nikon 14-24 and the Canon 16-35L.  If I decide to add more architectural photography to my menu of services this lens would be my "go to" lens.  Will I buy one?  I think so.  Should you care if I buy one?   Probably not.  As a matter of fact the previous review points out the foible of taking people's web opinions too literally.  My first impression was a lens with flare issues.  I was ready to give the lens back.  Obviously my test procedure was flawed.  I should have checked the front element carefully when I saw the first evidence of flare.  That's a mistake I probably won't make again.
It's an incredible lens.  Made in a fashion that is quickly becoming rarer than cheap, full frame camera bodies.  It's a sharp tool.  But a very specialized one.  If you need  that focal length you need this lens.  If you love shooting with longer lenses and you don't have clients to please then it's a lot of $$$$.
That's it. Off to lunch.  Today is Chinese food at Lotus Hunan on Bee Caves Rd.  If you live in Austin please try this place.  It's wonderful and the family that runs the place is sweet as can be.  Lots of interesting specials.
Posted by Kirk Tuck, Photographer/Writer at 12:07

No filter on the front of the lens?
Cleaning the front element, actually touching it!
Stop the world, I want to get off!
I'm both horrified and intrigued. :)
Please indulge us with above mentioned fodder for another blog post.

Never, never, never use filters on a lens unless they are for color effect or you are in an environment that flings hot, sharp residue at you and your camera. The lenses are meticulously designed to be perfect optical systems.......without additional glass in front of them.

And lower performance isn't what you paid all that money for in the first place...is it?

I have been to Lotus Hunan and it is the best Chinese Restaurant in the city. Not pretentious and not perhaps the most authentic but without question the highest food quality and a really wonderful staff.

Cool.
Thanks for the insight.
I'm sure it's obvious to many but I've always nervously slapped a UV filter over the front of the lens "just in case."
I like your keep it pure ethos.
Again, I'd love to see you flesh this out in a post/rant or happy marriage of the two. :)

Cleaning the front element of the dust and invariable front scudge that accumulates...does that not risk harm to the "rare earth" coatings on high end lenses?
I always thought that was verboten-risking cleaning marks or worse!

Thanks for the conversation Kirk.

I had thought some readers may be influenced by your comments about equipment choice despite you admonishing otherwise ..and I was sad to see the CZ 21 mm get a bad press ...so likewise relieved that the lens redeemed itself - I was originally wondering if you had a bad sample because (sun) flare was something I always found well controlled in the lens -so thanks for the clarification. The 21mm Zeiss is a indeed a revelation. IMO The 24mm is in a lower optical league across the board, although it shares the sweet color drawing and general engineering - I replaced a Nikon 14-24 zoom with these two Zeiss lenses and have no regrets..for landscape work which is my principal use. For landscapes, filter threads are real handy eg for ND grads and the 14-24 was a pain in that department, although I concur on "clear protection" filters entirely. Warning -Zeiss lens caps are sloppy and can come off in a bag that is knocked around...I keep a front filter on 'em all in a bouncing backpack, but NOT on a tripod :)

There's one thing that makes me scratching my head with the new ZF/ZE generation of Zeiss lenses: the shiny filter ring. This has got to have flare/reflection potential. The C/Y mount 135 format Zeiss lenses had an all black front. And videographers even use matte boxes or bellowed hoods on their lenses just to make sure nothing shiny is near the front element. What gives??

Zeiss lens caps are indeed a weak point. But so are Canon's: their side-pinch action makes them almost impossible to handle with a lens hood fitted to the lens. Zeiss have the design right with their pinch-in-the-middle type action, but the caps detach way too easily. Nikon on the other hand gets it totally right: pinch-in-the-middle action with a much more secure fit.

@ Gino Eelen: Oh good, I'm not the only Canon shooter proudly displaying a big ol' Nikon logo on the lens cap then (bought at the same time as my lens hoods, oddly enough). ;-)