I went through four Profoto Acute B batteries in three hours today. 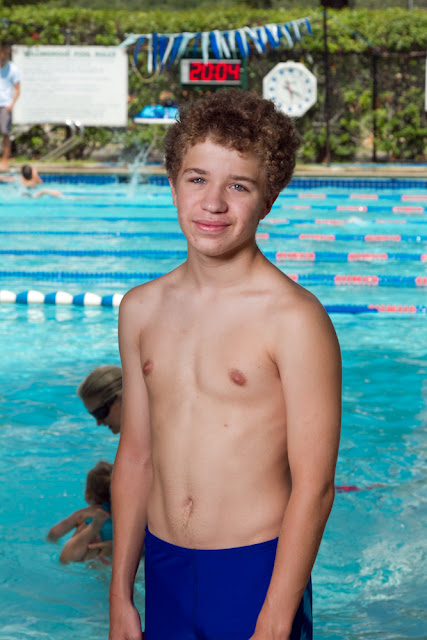 I agreed to do something I've never done before.  My kid is a swimmer for the mighty Rollingwood Waves swim team.  Every year they line up whatever kids want to participate and do a portrait of each one with the pool in the background.  They also round up all the kids and do group photos by age group.  In the past they hired someone to do this for a set price.  The photographer would deliver a 4x6 inch print of the individual swimmer and a 5x7 inch print of the age group the kid swims with, in a little presentation folder,  for somewhere around $20 per kid.  They've asked me if I wanted to do this in years past but it's not a niche in photography that I have any expertise in and I was usually too busy so I always declined.  This year the parents asked again and I decided to go ahead and do the job.  I figured 20 or 30 kids would sign up for the individual photos and I didn't have a lot on the calendar anyway.  Maybe I'd make enough money to buy a couple bags of groceries.

So I loaded the car with a Profoto 600b power pack

.  I also had 100 sign-up sheets that Belinda designed for me the night before.  I brought along 4 batteries

for the Profoto set up.

The shoot happened at 8:30 this morning so I left the house at 6:45, dropped by Starbucks for a coffee and a scone (intending to enjoy them later......) and then headed to my masters swim workout at 7:00.  After workout I unloaded the car and had everything set up and ready to go at 8:30.  When I looked up there was a line of moms and dads and kids and they were clutching the sign-up forms and their checkbooks and jockeying for position.  I had a volunteer assistant who took the paperwork, accepted their checks and helped line up the kids.

The way I organized myself was to have the kid (or parent) write the swimmer's name really big across the sign-up sheet.  Then I would take a test shot of each kid with the sheet in front of him/her.  That way I'd be able to identify any of the kids I didn't know by sight. (Keep in mind that I've been photographing some of these kids every Summer for the last ten years and all of them for the last four swim meets.)  As a failsafe I had a blank on the form called, "reference frame" and I'd call out the starting frame to my assistant and have them jot it in.

Long story curtailed.  I started making portraits at 8:30 and didn't look up or have time to grab my coffee from the car until 11:30.  We shot nearly 180 people, five group and over 800 total frames.  I was twenty shots into my fourth Profoto battery when the last person came through the line.  Nice to be able to click the box off, pull the battery out, shove another one in and get to work in less than a minute.  An hour into the shoot I had to have a parent make an emergency called to Belinda the Designer to bring more sign-up forms.  Thanks goodness she was near the studio.....

The flash was remarkably consistent and the beauty dish with diffusion was just right.  I was exhausted by I had a blast.  The previous photographer shot film and took one frame per person.  If you know anything about the way I shoot you'll know that's not the way we rolled today.  We shot until we got a genuine smile.  That meant a lot of photographer silliness: growling, howling, giggling, jumping up and down and generally acting about five years old.  You know, the same kind of thing we have to do to get CEO's not to look to stiff.

The battery pack system was the way to go.  We used it at almost full power to achieve parity with the sun.  The recycle was three seconds.  Since I used a radio trigger to fire the flash we had NO cables on the ground.  Nothing to trip over.  Nothing for the five year olds to play cowboy with.

I'll send digital files out to the lab.  Wait patiently for my folders to arrive and charge the camera batteries for the swim meet tomorrow night.

In the meantime I'm cleaning up the studio.  I got volunteered to do an art photo for the Breast Cancer Resource Center's annual Art Bra Calendar project.  I've got three or four people coming over to the studio in a couple of hours to model artist's "art bra" creations.  Should be a fun evening.  I don't know what to expect but that's never been an impediment before.