Try not to fall or drop anything into the number one tank. 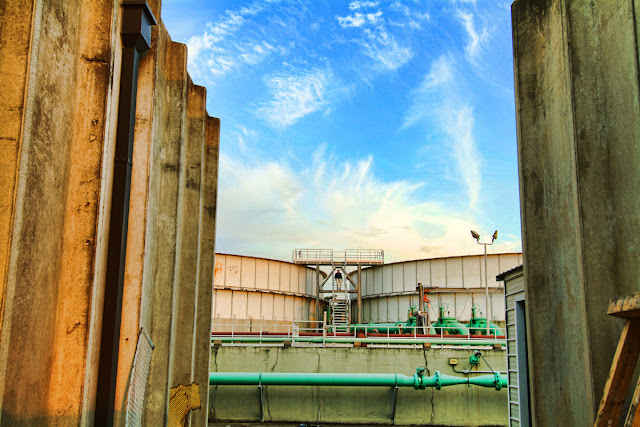 Why? "Oh, that's because it's the raw sewage intake tank." my client said casually.  "It'll be months before we find anything.  And it's really hard to swim in...."

One of the glamorous assignments that I truly loved came in 2004.  It was for one of the largest water and wastewater treatment companies in the U.S.  We cruised around and made images of all kinds of facilities.  It was on this trip that we introduced our art director from L.A. to the pleasures of Krispy Kreme donuts but our timing was off. We gave him a bag of fresh hot donuts about an hour before our twin engine prop commuter plane roared down the runway and into some really bumpy skies.

But what I liked about the assignment was the walking around in giant industrial plants looking for a shot.  All three of these came from a short slice of time at a single plant.  We'd done some shots to cover ourselves and we were about to go eat and recover from the rigors of the day when we saw the sunset and the wonderful soft clouds in the sky.  We stayed till long after dark shooting frame after frame.

Truly a situation of "waiting for the light to get neat." 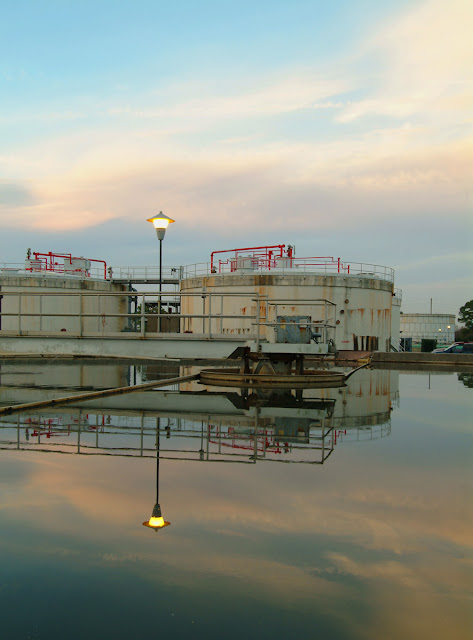 These were early days of digital and we were shooting with a camera that was frustrating and fascinating all at once.  It was a Fuji S2.  The color was beautiful and the camera's ability to handle contrasty situations was pretty unique but it used two different kinds of batteries.  Four double "a" batteries for the mechanical parts of the body and a separate DL 123 lithium battery for the digital part of the camera.  And the batteries staggered their dissipation so that you ended up changing out batteries twice as often.  And you had to assess which set was going down.  But the camera did long exposures well and the files were easy. 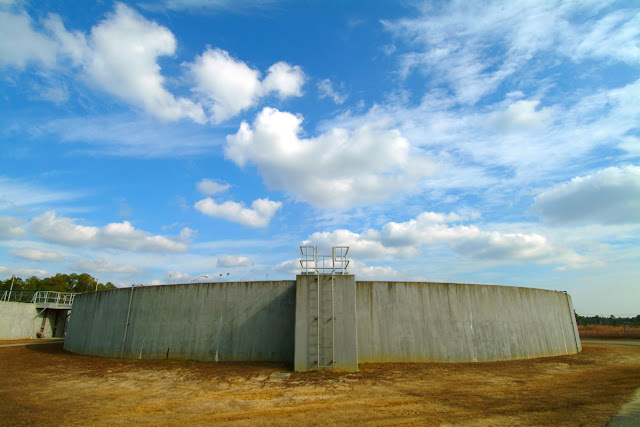 I was just about to leave on this job and I was taking two camera systems.  One was a set of Leica M6's with a range of lenses which included the 15mm Voigtlander for the M series.  A few hours before we headed to the airport Ian called from the camera store.  They'd gotten in a new Nikon lens.  I ran by and picked it up.  The lens we used most on the Fuji was the Nikon 12-24mm DX lens.  It was actually very good but got "better" when Adobe started including a profile for the lens in PhotoShop.

While the people at Fuji insisted on calling the S2 a 12 megapixel camera it was really a 6 megapixel camera but that didn't stop anyone from making a series of large prints for the client to display in their offices.

Don't know why I posted this today but it reminds me of how much fun assignments of exploration can be.....
Posted by Kirk, Photographer/Writer at 18:20 1 comment:

Ten ways to win an argument on a forum.

1.  Make up your own facts.  This is such a good strategy.  In advertising it's called, "Data Free Research."  Many people will believe whatever you tell them.  Works for politics, why not discussions about photography?

2.  Trot out algebra 2 and wiggle the numbers around ad infinitum.  To the people who didn't make it through algebra 1 everything with an equation attached is scientific fact.  Even the taste of a raspberry sno cone can be described and proven with a long enough stream of numbers and symbols.

3.  Be the last one standing.  Every time someone raises a question or disputes your data free research  shout them down and keep repeating your "facts" until everyone gets tired of the whole circus and moves on to "which camera should I buy?"

4.  Infer, imply or just go ahead and say it out loud: everyone who disagrees with you is a liar, a cheat or someone with a hidden agenda.  I have a friend who describes all the other drivers on the road like this:  "Everyone going faster than me is an asshole.  Everyone going slower than me is a moron."  It's the operative working methodology of forum rats as well.

5.  Try to pick apart all the small parts of other people's arguments instead of concentrating on the big picture.  This might consist of arguing about how fast a ship is really sinking instead of acknowledging that the ship is sinking.  Or, that "it wasn't the bullet that killed him, it was the vascular damage and the subsequent loss of blood."


6.  If challenged about why you are reinventing dirt, or why you insist on counting angels on the head of a pin, get very defensive and let them know that you are sharing your argument for the good of generations of future children as well as the miserable and intellectually downtrodden every where.

8.  If someone actually takes up the challenge and tests your idea, hypothesis, pipe dream, fantasy, terrible delusion, and finds it wanting in every way then immediately go on the defensive, protesting your brutal treatment at the hands of a reckless bully bent on derailing the train of intellectual progress.

9.  Drink lots and lots of Red Bull so no one can outlast you in a thousand post grudge match.  See point #3.

10.  The best way to win an argument on the web is to shut down your computer, go for a walk, take a nice photograph and be secure in the knowledge that arguing on the web is addictive behavior and you just got yours under control.  For now.