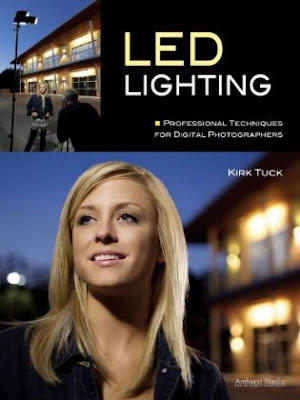 I am very excited about this BOOK.  I didn't know my publisher had already submitted the cover and details to Amazon.com but I'm delighted to know that we're finally official.  This is my fifth book about photography and was easily the most fun to create.  (For those of you who are unfamiliar with my books I write and photograph and illustrate each one of them.  Takes twice as long as doing the writing alone but it makes more sense).  It took some arm twisting at first to convince the publisher at Amherst that LED lighting will be an increasingly important topic in the next few months and certainly in the next few years.

So, why do I think LEDs will become increasingly important and why did I want to be the first person to write a book about it for photographers?  The answer to the first part of the question is as simple as the shoot I did for a semiconductor manufacturer during the days on Thurs. and Fri. last week.  I was shooting small objects with a mix of shiny and matte surfaces and I needed complete control of the lights.  The combination of continuous lighting and live view on the screen of the Canon 5Dmk2 gave me a level of control and immediacy that I've never enjoyed in the "bad old days" of still life photography.

I've used "hot lights" in the past but having three, five hundred watt tungsten lights in close proximity to your camera and your subject quickly becomes an uncomfortable working situation.  With live view engaged there is no mirror slap.  With the LED panels I use there's lots of light and very little (if any) heat to deal with.  One simple custom white balance and we're all set.  Earlier in the week I photographed my friend, Natalie, and she ( a Brooks Institute graduate ) remarked about the wonderful light quality, the lack of flash (she'd always been a "blinker" before) and the fact that her pupils were not overly dilated which can happen with dark rooms and low powered modeling lights on flash.  The LED lights are energy efficient, bring relief from thermal torture, are totally WYSIWYG and can actually be cheaper to buy and use than flash.  Best of all, the meter in your camera is all you need for total control.
The final (and to many), most important consideration:  If you do video you NEED a good set of LED lights.

But why did I want to write the book?  Well,  I've been photographing for a long time and I'd become used to all the lighting rigs that dominated our market for so long.  The LEDs are a near total departure from everything I learned and grew up with.  They represented the new challenge to master.  And there's no better way to learn technique than to commit to new technology, dive in and test, test, test.

The book has in depth examples of interior and exterior portrait work done with the LEDs as well as an extended and well diagrammed food shoot at one of Austin's premier restaurants.  You'll be able to take advantage of my learning curve in selecting and using the most cost effective LED panels.

The cost of the book is less than some magazines.  If you like what I write here I think you're a natural for this book.  And buying copies of the book will help support my writing here.  I'm rarely so blunt or so marketing driven but I'd love it if you would pre-order a copy of the book.  I'd love to see this one do as well as the four previous ones.  The delivery date on the site says April 1st but I'm betting it will be here in early March.

It feels so good to see it as a finished piece of work on Amazon.  I lived with the information and practice for six months.  Count me as very happy today.