The time of year we've all been waiting for. Welcome to SXSW. 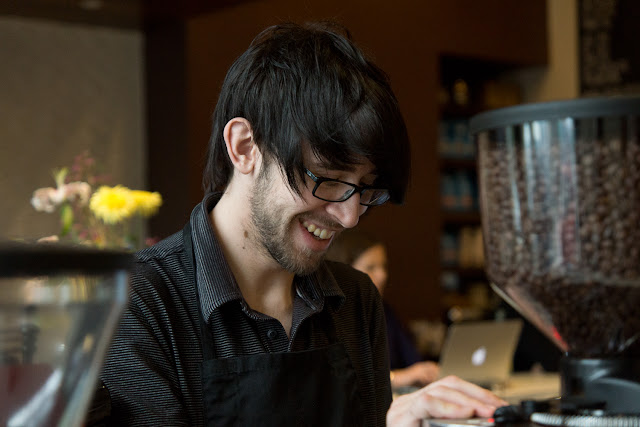 One of our favorite barristas at Caffe Medici.


It's here! The event that all the local hotels and restaurants have been waiting for.
It's South by Southwest.  The logos all read, "SXSW."  And the hipsters all just say, "South by."  Whatever.  It's here in my city.  And it's going to be happening for the next ten days.
240,000 techies, movie lovers and live music lovers crammed into our downtown for a
current cultural love fest. They're here.
More are coming every day and some of them will probably end up staying.
And that's okay as long as they sign the pledge card to "Keep Austin Weird."

If there are any visitors reading this you'll want to make Caffe Medici on Congress Ave. your operations center for caffeine replenishment.  Best cappuccinos around. 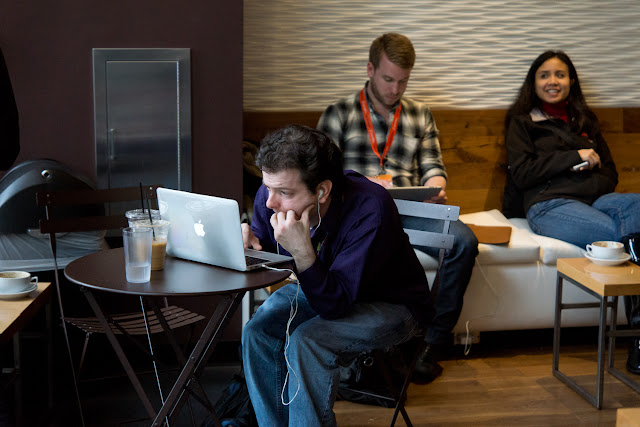 Always amazed that people travel in from everywhere to do the "face-to-face"
and then really end up "face-to-computer.
That's my friend, Cindy Lo in the background (No, not the one in the plaid).
She's an ex-techie who now runs an event company.
Just taking a break from the first day of sessions. 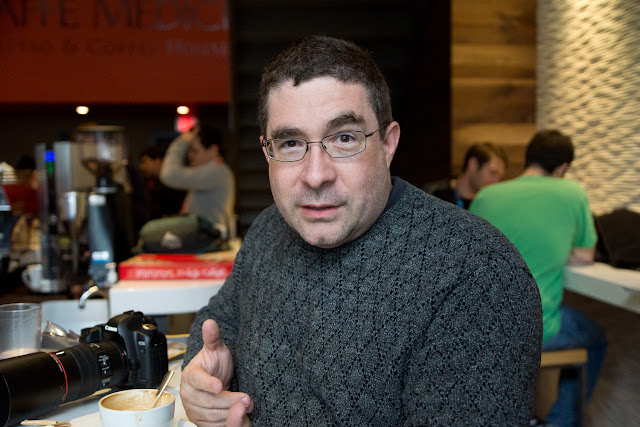 Bernard, Frank, Nathan and I met at Caffe Medici today to have
a PHOTO SIT.  It's different from a "photo walk" in that
no one is in charge, no one's ego gets massaged, there's
no ulterior profit or mindshare motive and
we get to sit around and drink great coffee.
Occasionally one of us will jump up
from the bar and take a photograph of someone.
It's spontaneous.  And no one
poaches anyone else's shots by
Leaning over their shoulder and
Double shooting.
Cool. 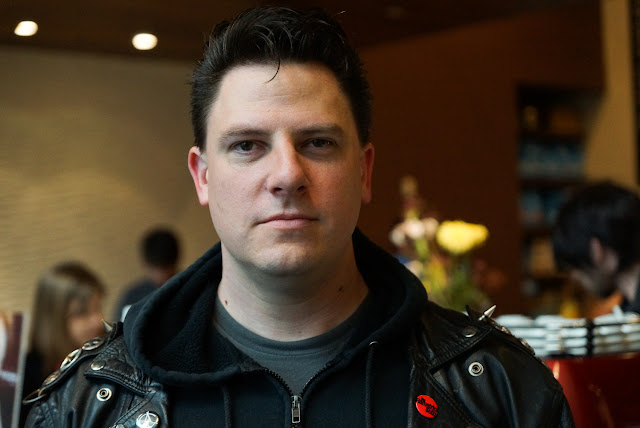 This is Nathan.  And I have to admit something embarrassing.
We both showed up with the same model of camera.  We both showed up
with a Sony a77.  How weird is that? So embarrassing, right?
This is the look he gave me when he found out I was
carrying his brand. It's his territory. He had one
first.
(Just kidding.  We did have the same camera and lens but I asked him to pose "mean.") 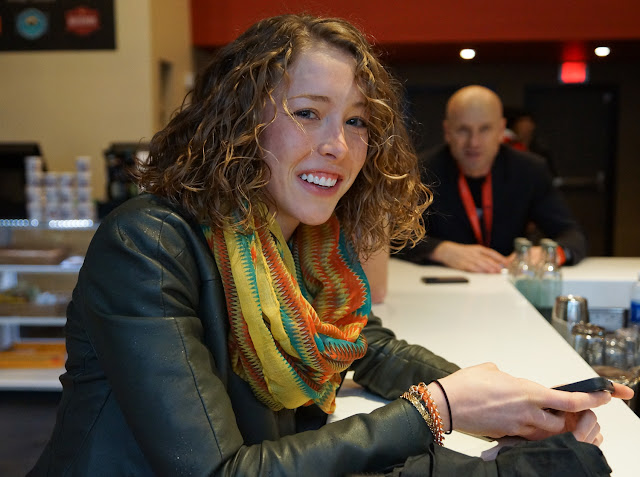 When I jumped up from the bar to photograph someone it was because
I saw this person on the other side of the bar and loved her smile.
And her amazingly present scarf. 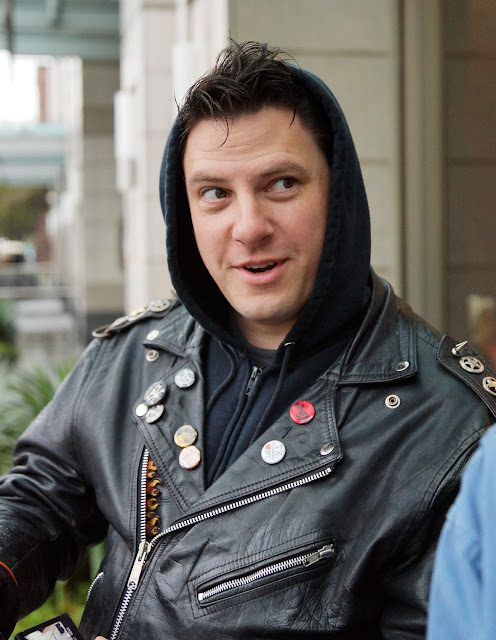 When the rain hit a crescendo, really pounding down,
I decided to venture out of the safety of the coffee
house and face SXSW outside.
Did I forget to mention that it's been raining for days here?
Well, it has been and we're all damn happy about it even if
it's mildly inconvenient for the visitors.  You see, we've
been in an extreme drought for the last 18 months and
we desperately need rain.  In fact, when I strolled out of the coffee house
into the downpour I thought I saw our governor dancing naked up near the Capitol.
Not sure.  Could have been a trick of the lightning.
Out we go into the elements with Nathan assuring me that our
cameras are weatherproof....yikes. 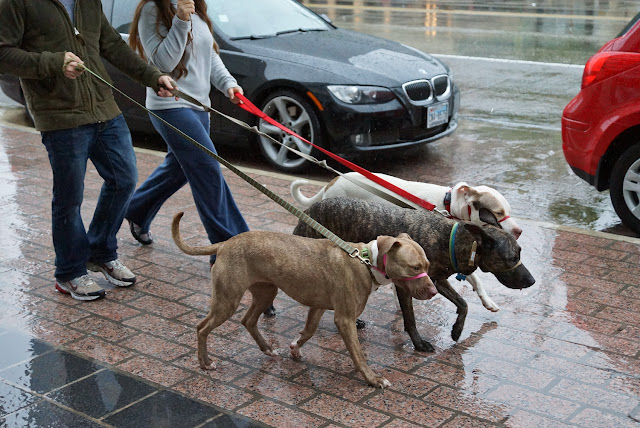 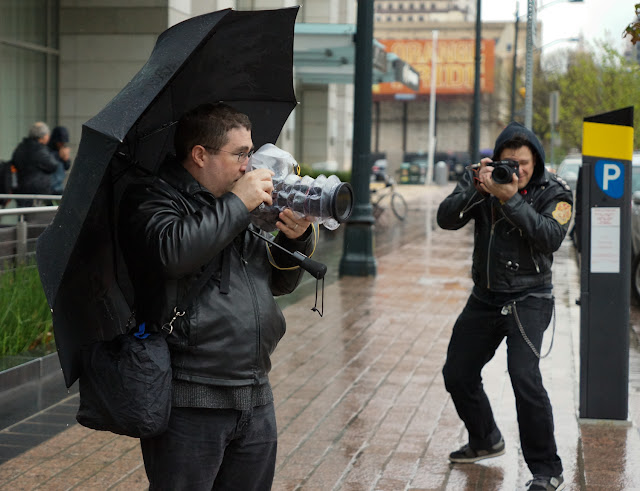 Bernard is sporting a camera cover and an umbrella.
Nathan has gone and decided to ignore the Amazonian-style deluge.
He photographs me photographing Bernard photographing and
suddenly I feel like I'm in an M.C. Escher photograph.
Away we go. 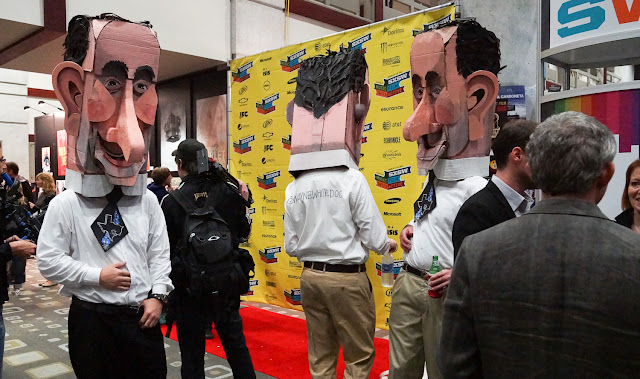 I lost track of Bernard and Nathan somewhere between Congress and San Jacinto Streets.
I think they got caught in a cross current.  For all I know they're floating out toward
Lady Bird Lake.
They were good comrades in camera straps.  They will be missed.
But I was happy and dry in the Austin Convention Center trying to make
sense of all the frenetic activity.
I was confused. I didn't even know who the guys in the
giant cardboard heads were supposed to be. 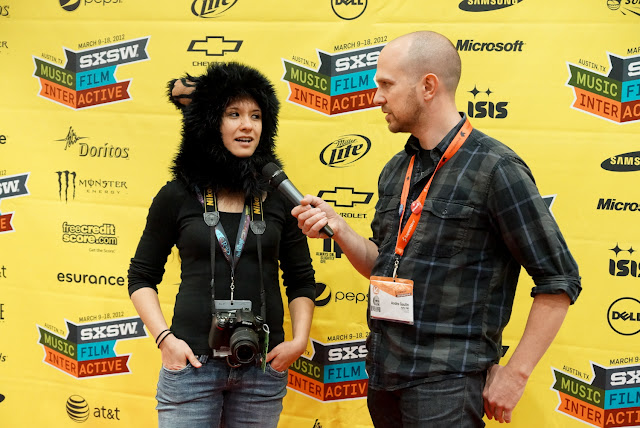 Everywhere I turned people were being interviewed.  I'm not sure what they
were talking about but I'm sure it will someday be as important as Twitter.
Or more so.  And it will have all started here. 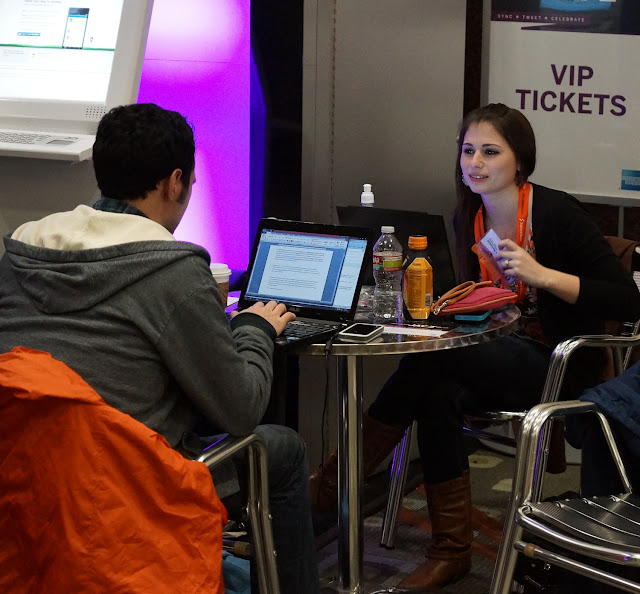 There were demo areas all over the first floor.  And at everyone of them
people were staring into laptop screens.  Staring and typing.
I don't know what the VIP Tickets are for but I'm
betting it's something very special and very good. 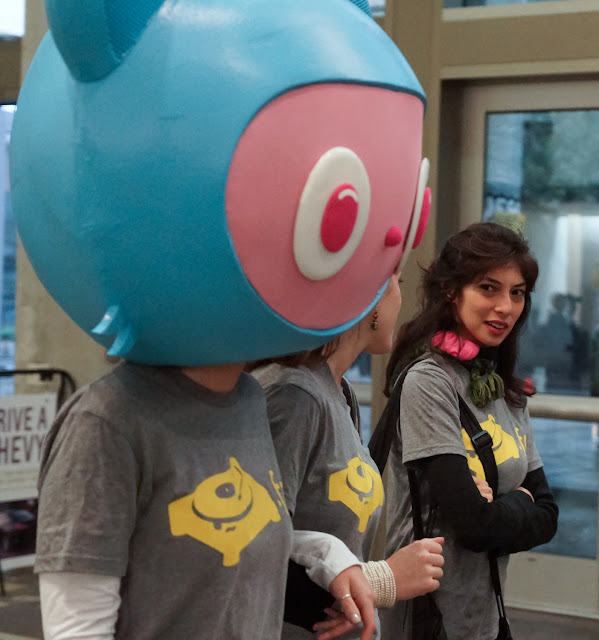 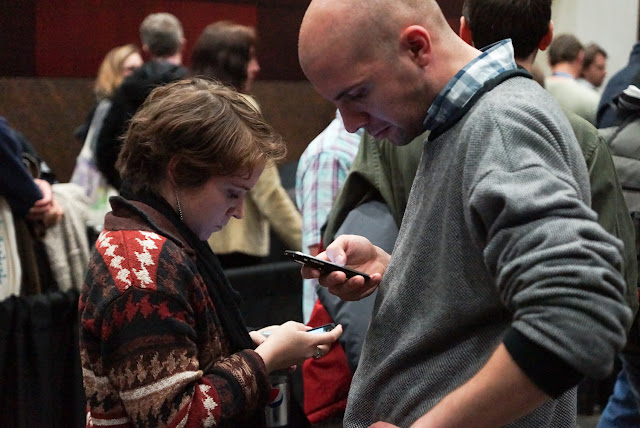 This (just above) pretty much sums up the interactive component of SXSW for me.
People staring at iPhones.  Surrounded by lots of other interesting people.
Who are also staring at their iPhones.  And the messages probably read:
"I'm having dinr.  What are U doing?"

But from what I saw today typing on laptops and staring at iPhone screens is
sporadically interrupted by the drone of presenters in big, dark rooms talking about
the latest way to "Stay in touch" while Power Point slides
slip across the screen over their heads.

"How can we monetize that?" 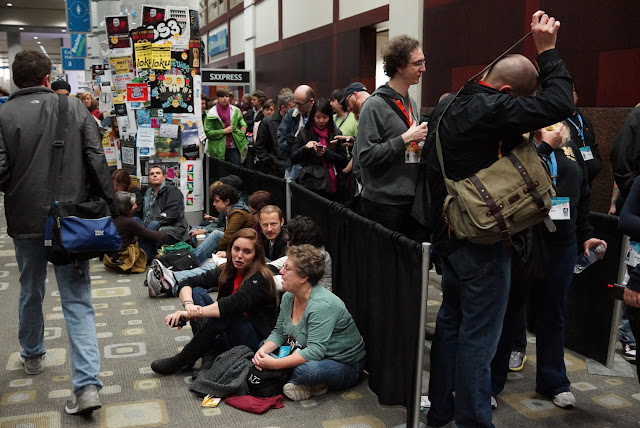 And anywhere you'll find 200K attendees you will find long lines.
A pre-perestroika Soviet citizen would feel right at home.....
At least it was safe and dry. 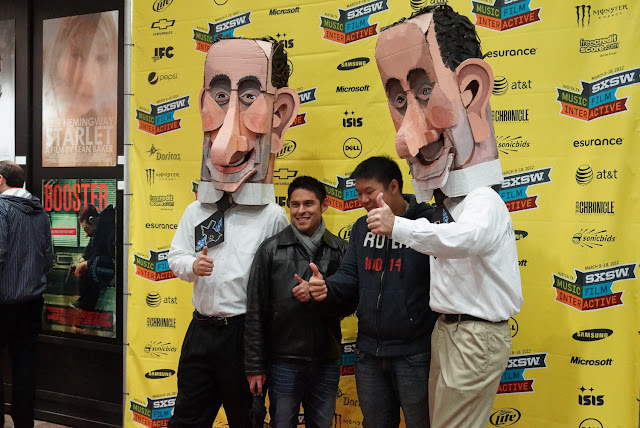 Still not getting the hang of this one... 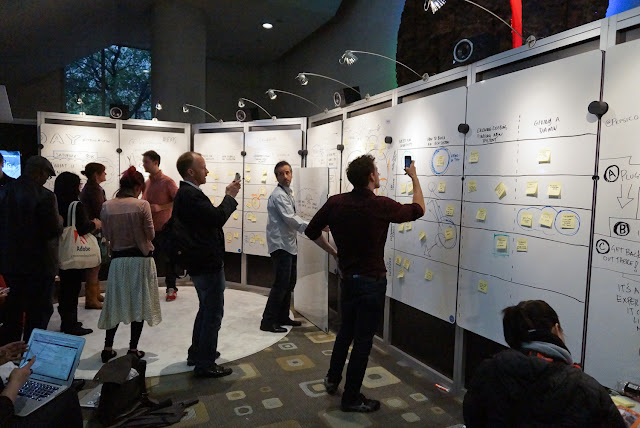 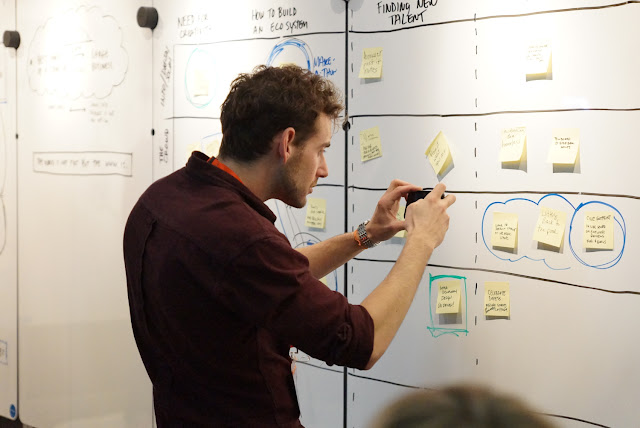 Or we could look at a cellphone screen shot of a three word Post-it note. 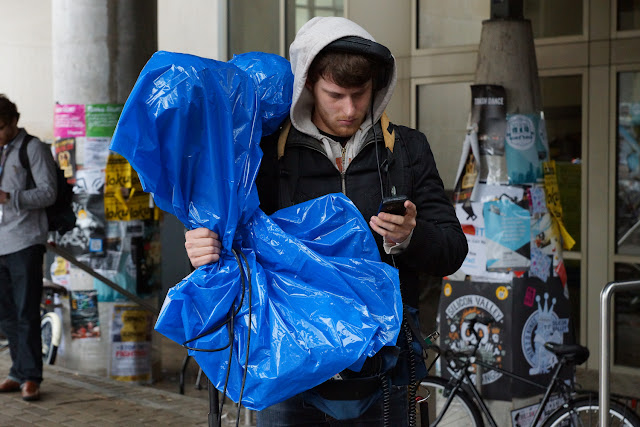 This guy is running sound for a video crew.  At least that's what I deduced.
He's got a microphone with a fuzzy blimp on a pole under that blue plastic and
he's got one of those "sound guy" waist packs as well.

He is also standing alone and staring at the screen of his cellphone. 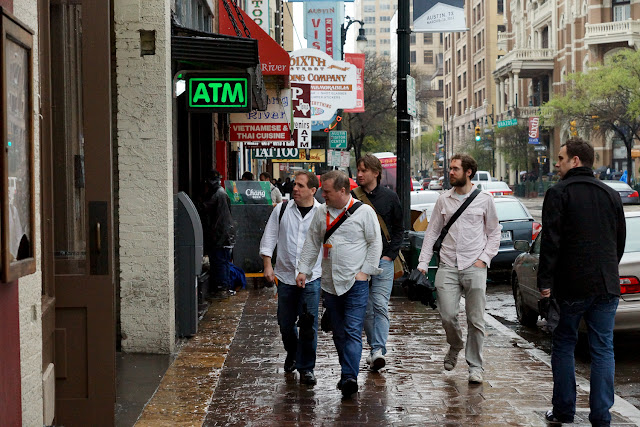 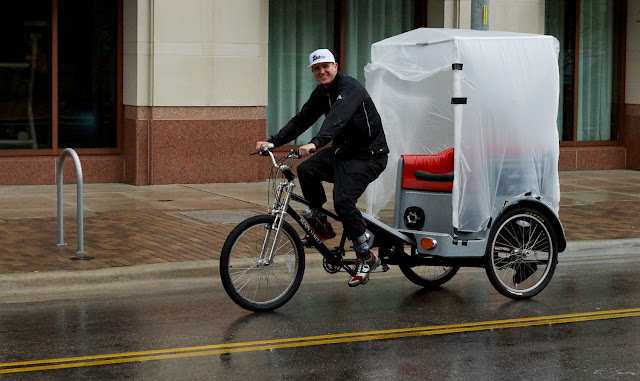 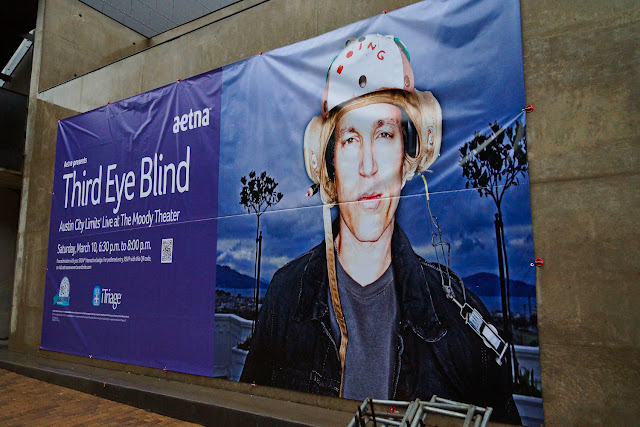 Darn. I missed the Third Eye Blind concert at the Moody Theater.
They call it the "Moody Theater" because that's its real name.
The natives call it "Austin City Limits." 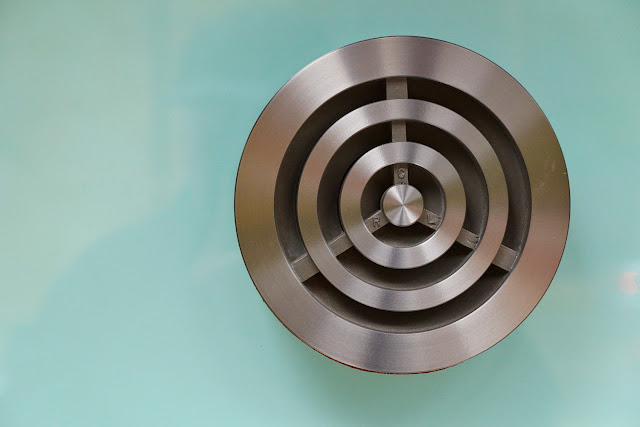 1600 is about as far as I'd go with the a77 for perfectly clean files from
Jpegs.  I might risk 3200 in raw.  I'd rather shoot everything under 400.
But that doesn't make it a bad camera.  Just one that's not very good at ultra high
ISOs.  And that's okay with me as long as it delivers on the low end.
We'll find out about that ASAP. 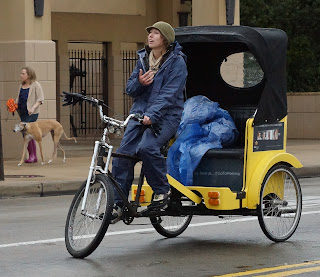 Pedi-Cab on Lamar Blvd. Just in front of Whole Foods Super-Hyper
Flagship store.  Such a euphoric look for someone in the middle
of crazy Austin traffic in the rain...

Some hints for the newcomers:

1.  Don't swim in Barton Springs right after a big rainstorm. The run off drives up the fecal coliform
content of the water, making it unsafe.  Wait a few days.

2.  Don't drive in Westlake Hills. Ever. The natives are ferocious.  And besides, we don't need anymore traffic over here.  Stay downtown.

3.  Don't toss out the sunscreen.  Just because it only hit 45 today doesn't mean we won't be in the sunny 80's tomorrow.

4.  Snarky comment about dressing in black removed.  I realized I was wearing black too...

5.  Try to spend all your money in local bars, restaurants and coffee shops.  We love you even more when we get to keep most of the money in the city limits...

6.  The light levels in the convention center (locus of most SXSW activity) are very low.  You will not need the sunglasses inside.

7.  None of the BBQ is authentic unless you are eating it at the Salt Lick, Artz or maybe Franklin's. Everything else is just cheap meat in spicy ketchup.  Frank just reminded me about Iron Works.  It's good too.  And they have good BBQ ribs at Whole Foods.

8.  All of the Tex-Mex food is authentic unless you are eating it in the restaurant of your hotel or at Taco Bell.  Not all of it is good...but it is authentic.

9.  If you see a really cool guy with gray hair point a Sony a77 digital camera at you this week try to feign a look of inspired brilliance and try to look really, really interesting.

So, have a great time while you're here.  You might as well go a little crazy, clean out your 401k and really party in style but when the conference is over you'll probably want to go back to your own town.  I'm sure it's much nicer than Austin.  Have you been to Madison yet?