A different approach to portraits. 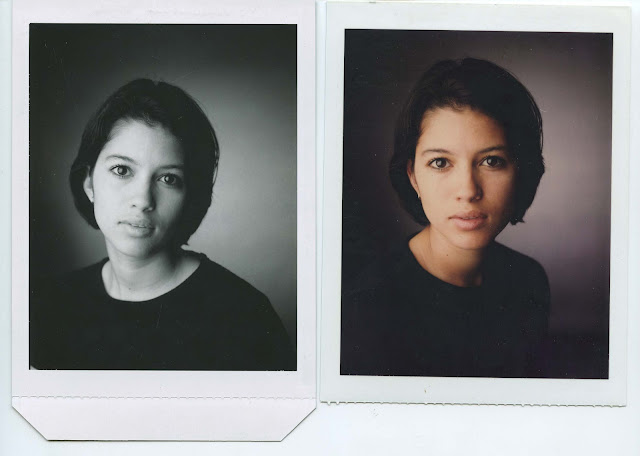 These are 4x5 inch sheets of Polaroid Film.  They aren't the kind that buzz out of the slot in an SX-70 and automatically process in your hands, covered with a protective plastic layer.  These are the kind that each come in their own protective sandwich of opaque paper.  To do a portrait on Polaroid you definitely need a subject who hasn't seen to many "behind the scenes" videos where everyone is always moving and purring, "Pout for me baby and I'll make you a star."

These were done on a Linhof TechniKarden view camera outfitted with a 250mm f5.6 Zeiss Planar lens (designed for a 5x7 inch camera).  I shot them at 5.6 which, at this camera to subject distance meant that depth of field was measured in centimeters at best.

Here's the routine for shooting Polaroids in a large format camera.  Open shutter and compose.  Focus on your subject.  Get a loupe and a dark cloth and fine focus with a loupe at your taking aperture (lenses tend to focus shift as you stop down).  When everything is perfect ask your subject to stay in position.  Close the shutter and cock the lens.  Put a Polaroid film holder into the space between the ground glass focusing back and the film plane.  Pull the paper envelope surrounding the film into the "up" position. Get the expression you want from your subject. Press the cable release.  The shot has been taken.  Now push the paper envelope back down over the film until it locks in place.  Push the release button on the Polaroid back and slide the entire package out.  You'll feel some friction as you do so.  That's two polished rollers breaking the gel pods that hold the developer and spreading it across the Polaroid film.  This takes place within the film and paper envelope.  Figure out the temperature  and use the scale to gauge the time needed for proper development. Polaroid sheets were both time and temperature sensitive in development. When the time is reached (45 seconds for black and white, 90 seconds for color) pull apart the paper envelope and retrieve the wet print, which will smell like glacial acetic acid.  Allow the print surface to totally dry before handling or stacking.

Now you are ready to take your next frame.  Continue until you have the desired look and then switch to regular film for your final shots.

We always started with black and white because it was more exact in exposure correspondence with films and it was half the price of the color Polaroid.  It was also more consistent because it wasn't as temperature sensitive.  Once we got to the film stage we had a really good idea of how the finals would look.  At the end of a session we'd shoot one last black and white Polaroid to make sure nothing had changed during our project.

The slow pace of a four by five shoot can be a positive.  People slow down and relax over time.  The process is a slow and effective feedback loop for the photographer and his model.  And the image is the same size as the final piece of film.

There's something captivating about going through a whole box of Polaroid outtakes.

My favorite Polaroid story happened when I was shooting the Alexander Palace in Pushkin, Russia in 1995.  We were supposed to do a frontal elevation but the building had two T-72 Soviet battle tanks parked out front.  It was, after all, a secure location at the time.  I was standing knee deep in snow pleading, through my interpreter, for a solution that would allow me to shoot the front of the Palace without tanks.

Finally we had a break through in communications.  The commander had been watching us shoot Polaroids and loved them.  He told our interpreter that he would move the tanks but I would have to take Polaroids of each tank crew and a Polaroid of the commander in front of both tanks.  I agreed and we shot them quickly.  I stuck the Polaroids in my jacket to warm them up and develop them.  The tank commander and his men smiled as I handed out the three prints and, with incredible noise, fired up the tanks and backed them out of my frame.  Instant success.  Instantly.  Well, about 3 minutes......

Say what you will about the latest digital cameras but there's something about large format that's still magical.
Posted by Kirk, Photographer/Writer at 19:14 23 comments:

Wisdom and intelligence are not the same. I'd choose wise over smart any day. If I had a choice. 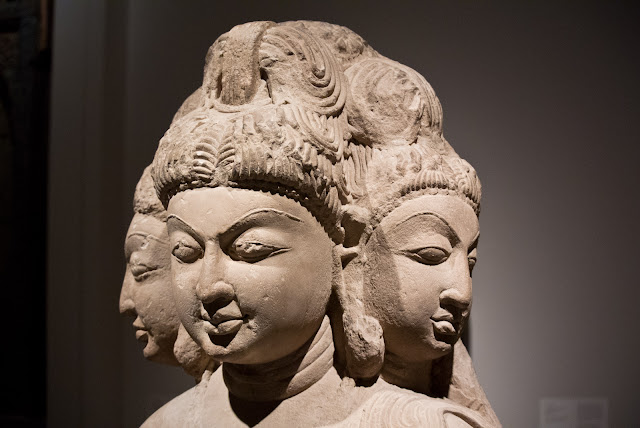 I'm having fun today.
I put all of my Canon equipment in a big, big box and
sold it.  All of it.  Every flash. Every body.
Every lens. Even the little flash sync cords.
No more L lenses.  No more
promotional camera straps.
Where do I go from here?