Working in an Operating Room. How many pixels do I need? 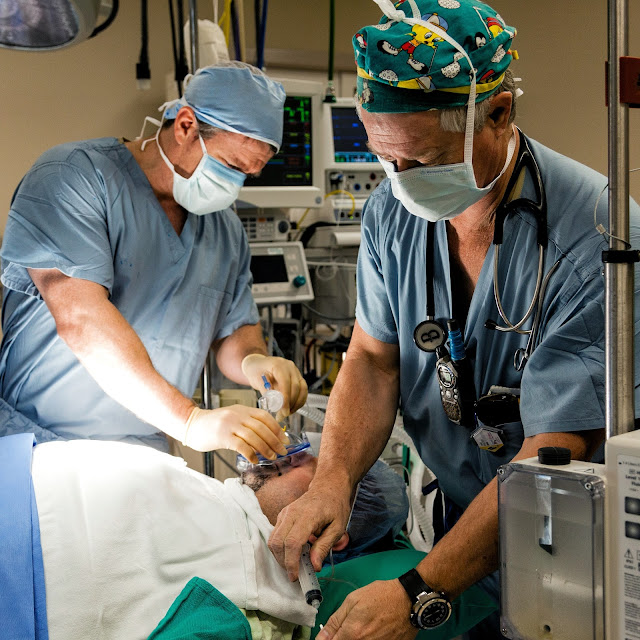 I spent two days at a hospital in San Antonio and shot a bunch of stuff. This is a set up shot in an operating room. I used a Canon camera and lens and shot with the lights in the room.  The biggest issue is the wide range of light from the hot spot on the "patient's" chest to the shadow areas on the anesthesiologist. The 5Dmk2 was a nice camera.  A bit clunky, but nice.  All the cameras I've played with in the last year are up to this kind of work.  Most of it will go in brochures and on the web.  Nothing will go up bigger than 9 by 12 inches.  Makes you wonder what we're chasing and why when we get into that megapixel fixation and slap the credit cards down.

I made an observation back in 2009 that more and more of our work would be going to web advertising (ignore this if you never sell your work and are making large prints for your own pleasure....).  At the time the big screens were almost 2000 pixels by something. I made the suggestion that all the cameras we were using at the time were capable of satisfying those needs, handily.

Now we've got Apple introducing Retina screens into everything and all of a sudden we're about to grapple with 2500 pixels wide by something.  But last time I checked that's still within the technical scope of a 12 megapixel camera.  Maybe our current cameras (especially the 24 megapixel ones) are relatively protected from obsolescence for while longer.  I guess we'll see.
Funny to hear all the gnashing of teeth and pounding of chests about the D800 given that all the examples we've seen so far are only a couple thousand pixels wide....

Posted by Kirk, Photographer/Writer at 12:41 6 comments: 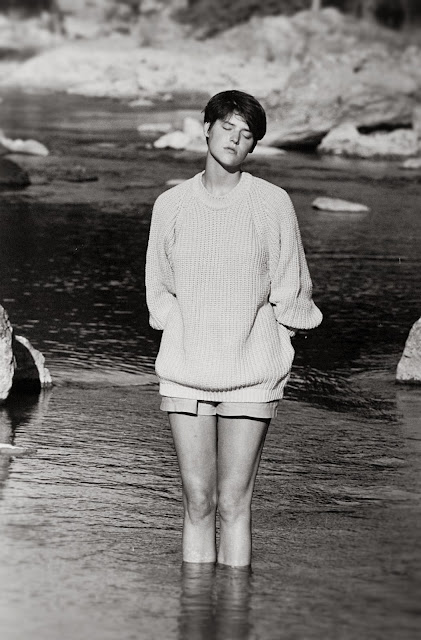 I don't know what the "perfect day" looks like to you but to me it's never the big banner days of giant projects, wild celebrations or "once in a lifetime" events.  I've come to enjoy days that don't revolve around breathlessness and adrenaline.  I like small pleasures that have the promise of being repeatably enjoyable. I prefer the quiet and personal photograph to the big production. I prefer simple to complicated and I like my aesthetics clean and uncluttered by the make-up of the moment.

I may be having the best Summer of my life.  And today is an example of one of the best days of my life. I would have shaken my head in disbelief if I'd found myself saying something like this a few years back. I was caught in the relentlessness of being relentless.  Always busy. Always scheduled. Always moving. This Summer is a slow one for my business. I don't have a publisher's deadline to goad me. I'm not booked on lots of small, busy jobs. I'm just coasting in commerce and savoring the downtime.

My June days have been spent in the relative luxury of laziness.  Not a "do nothing" laziness but a "do fun stuff" kind of laziness.

Yesterday was my idea of my ideal.  I got Ben (my teenage son..) up at 6:30 am, we both drank big glasses of water and had a spoonful of local honey.  I drove him to Barton Springs Pool where he met up with the other members of his cross country team for a nice two hour run.  I turned the car around and headed to the Rollingwood Pool, just a mile away, and was in the water with my swim friends--coach on deck--by 7:00 am.  We pounded out about 3000 yards and in between sets we watched the most beautiful clouds swirl in three directions, three layers deep across the blue sky.

After workout I put individual envelopes containing 147 portraits of the Rollingwood Waves Kid's swim team (and team pictures)  into their folders at the pool so their moms and dads could pick them up when the kids came to practice.

Then I headed back to Barton Springs Pool to pick up Ben.  It was a warm day and we had nothing pressing on the schedule so Ben's crew all jumped into the pool to cool down the road miles.  I sat in the shade of a giant cottonwood tree and read a chapter from a book I'm reading on Creativity.  After the swim we headed to P. Terry's, an Austin style, drive through organicky burger joint to get breakfast sandwiches of scrambled eggs, cheese and sausage, chased down with Ruta Maya coffee.  Ben and I sat at one of the robin's egg blue picnic tables enjoying the breakfast and watching the amazing swirl of cloud ballet against the blue of the sky.

I dropped Ben at Jack's house.  They're working on some sort of project.... and I headed in to the studio to check on e-mail and phone messages. Nothing life or death.  I made few phone calls, addressed a few post cards, sent out some gratuitous e-mail and called it a day.  In the early afternoon I picked up Ben and we met my photographer friend, Paul, at the Whole Foods flagship store for lunch.  We had an odd mix of sushi and barbeque.

In the afternoon Ben slogged through another novel and I went horizontal on the couch to finish reading about creativity.  The dog curled up on my feet and snored softly.  I did a load of laundry.

Later in the day Ben's friends came over to play video games and horse around.  I retreated into the studio to read all the crazy stuff on the web.  Then Belinda came home.  We opened a bottle of Stag's Leap Artemis wine and made dinner.  We sat down to Sopa de Lima and quesadillas just as the last magenta slash of sunset kissed the sky.

I could worry about business but I've come to realize that there will always be an ebb and a flow and I can always make myself busy with a book or a project if I want to. But I only have two years left before Ben goes off to college and spending the Summer with him makes me feel like a billionaire on my own private island.  I'll get back to the business of photography just a little later...

The photo above sums up the pleasure of photography for me. A small group of us were lazily taking images along the banks of the Pedernales River.  We were all wading in and out of the running water.  I asked my model to close her eyes and feel the laziness of a hot Summer day and then I photographed here with an film SLR and a 180mm lens. No schedule, only a hazy agenda and all the time in the world.  If you chase it too hard you might never catch it...

Posted by Kirk, Photographer/Writer at 12:01 4 comments: