Putting a Human Touch on Healthcare. An assignment for a medical practice. 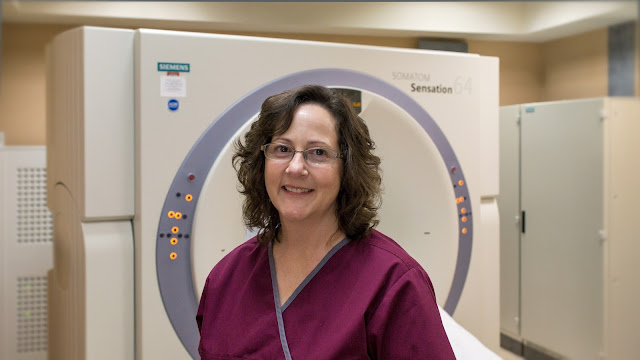 My assignment a month ago was to put a human face on the practice of radiology.  We've seen lots of ads with heroic looking radiologists reading arcane scans on bright screens but in the day to day world of radiology so much of the client contact is done by the highly trained and skilled technicians and nurses.  I was invited to make images of the people that actual patients see when they come into the clinic for a diagnostic test.  Real people.

We also wanted to show the machines.  CT and nuclear scanners and MRI machines.

I'd done a few campaigns like this back in the days of film and flash and I can honestly say that shooting digital was great. I wouldn't have shot film on this job even if the budget was there.  When I first started shooting work like this we were using Hasselblad film cameras, ISO 100-400 speed transparency films and powerful monolights or even box and head flash systems.  We'd get to a room with a CT scanner and the first thing we'd need to do (besides figure out a basic composition) is to figure out how to overpower all of the florescent lights.  We'd usually turn them off and construct a lighting set up that was a mix of light bouncing off the ceilings in three or four places as well as a few direct facing softboxes.  It worked but it was tough to make a totally believable lighting look given the very short time we had access to the rooms or the machines.  We overpowered the light because it was always important to get the color temperature right and electronic flashes were the primary way we instituted color accuracy and consistency in a shoot back then.....

So much has changed. In the image above I used three Fotodiox 312AS LED panels in concert with the florescent room lights.  One panel, firing into a shoot through umbrella was used just to the left of the camera to light up the subject's face and fill in for the top light coming from the florescent.  Another panel was used on the far right side of the room to add light to the right side of the CT scanner.  A third light was positioned behind the machine to help light the back wall.  I had tested the lights and the rotary controls for changing color temperatures during our scouting trip the week before.  I'd marked the color control settings with tape so I could come back to them without trial and error.  We were in an out of the room in about fifteen minutes with lots of good shots and variations. 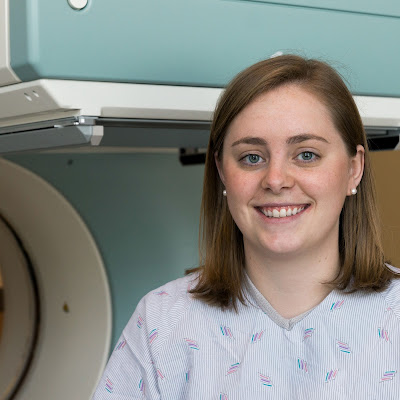 This young woman volunteered to be a patient for one of our shots and I was delighted to find that the machine faced a wall of windows that brought indirect north light into the room.  We used a couple of Fotodiox 312AS panels, set between daylight and tungsten balance, to light up the back walls.  Took about as much time to set the back walls as it did to write about it just now.  A far cry from even the days of portable strobes which needed to be tested, iteratively... 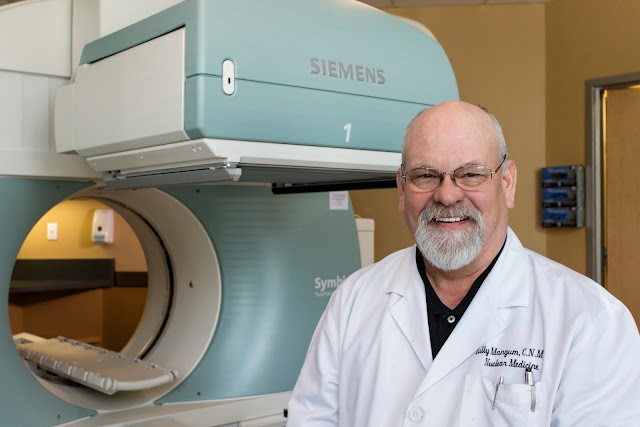 This is the same room as the one we photographed the young woman in, above.  I had my back against the window and a Sony 16-50mm f2.8 lens on the camera and I kept zooming out until I found a composition that worked for me.  Both of my LED panels were pressed into service to light up the background.  Wonderful to be able to turn a dial and watch the light get brighter or dimmer.  I knew I hit my good balance when a quick spot metering showed everything within the handling range of the camera's sensor.

The panels I've been using run off two cheap Sony camcorder batteries and each set of batteries is good for about two hours of continuous run time.  We'd switch them on for the set up and shoot and then off when finished shooting at each location.  We made it through a long day of shooting and about ten location with battery juice to spare.

Nice thing about shooting with EVF cameras like the Sony a77 is the ability to pre-chimp (tm). I can set up a light and have someone turn a light up or down and watch the effect on the entire scene in the electronic finder as it happens.  I see it the way the sensor is seeing it.  It's an amazingly efficient way to light. 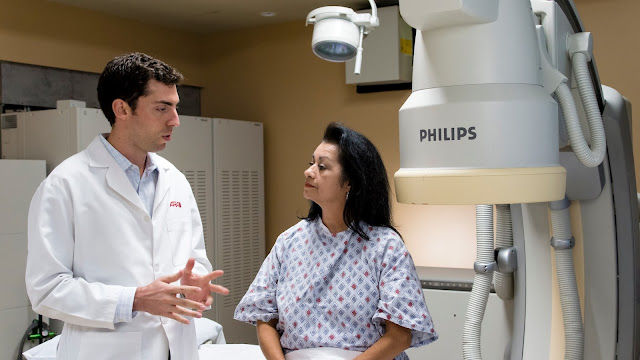 This consultation scene is lit with three panels: One to the left of the doctor to provide fill (the ceiling mounted florescent fixtures are providing the "main" light.  One to the right of the patient to provide good fill to the right side of her face and then one to light up the back wall.

This kind of job takes three things to do well:  The confidence to light quickly, the ability to establish a quick rapport with your collaborating subjects and a good schedule and plan of attack. I depended on my art director to round up our subjects and get them where we needed them on time.  I depended on a Think Tank Airport Security rolling bag to carry my LED panels, two cameras and three lenses.  A tripod strapped to the side.  Light stands and umbrellas in a small tripod bag.

We used the Sony a77 in its full 24 megapixel mode.  I will say this for the Sony cameras I've been shooting with,  they really are good at nailing very pleasing flesh tones. Best than the Canons with which I had been working.  And the detail in the files is amazing.  We shot nearly everything at 800 ISO and the noise was well controlled with just a nudge or two in Lightroom.  I can barely wait until Sony launches the new full frame camera.

Posted by Kirk, Photographer/Writer at 12:20 4 comments:

Making good use of available light. 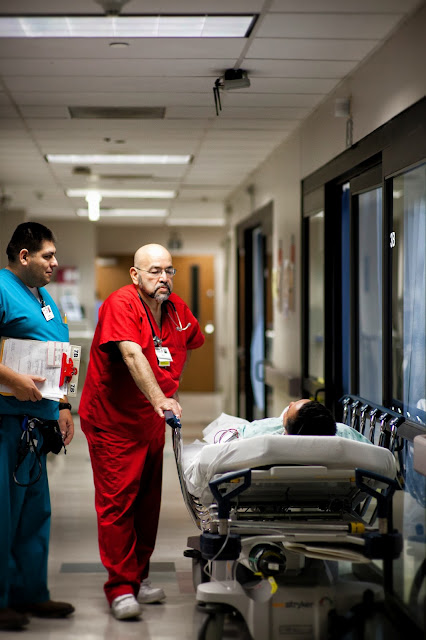 I can't tell you how many times I've hired a new assistant, gone on location and had him or her start setting up lights willy-nilly once we get to a location. I don't always want to set up a light let alone many lights... So many scenes are just better without extra lights. I find that more and more situations just call for a judicious dose of fill in lighting, limited to very small areas. A color balanced LED panel or just a tiny squirt of flash.

In the case above I was perfectly happy to put my camera on a tripod, compose and shoot.  If you need to stretch out your day then, by all means, start grabbing the light stands and sandbags.  But if you bid your job correctly and you're getting paid by the use or by the image a quick test shot and some good location juggling might be just the key to getting what you want. Quickly and with no fuss.


Posted by Kirk, Photographer/Writer at 11:30 7 comments:

This guy's photography is absolutely amazing. I love it. 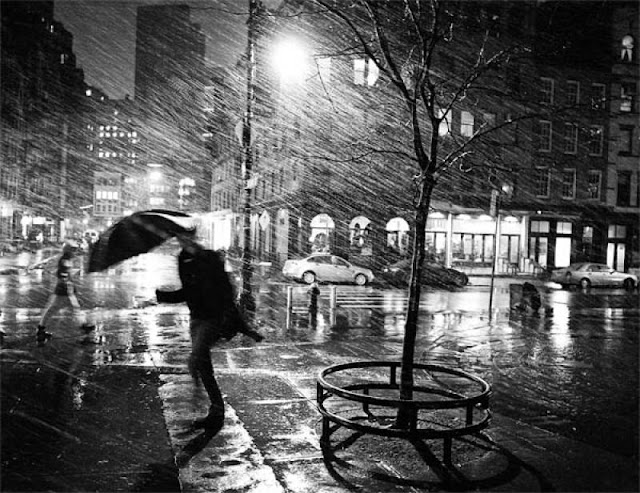 Go here:  http://www.paulszynol.com/  look at the work and then come back.  I'll wait.  Take your time and really look.

Okay. This is how great documentary and street photograph looks to me. We can argue about all kinds of minutia but in the end the guy who goes out with a sharpened vision and crazy good curiosity gets the win.

Did I mention that you should go and see this guy's site?    http://www.paulszynol.com/

Thank you to Paul for sending me this link.
Posted by Kirk, Photographer/Writer at 10:23 16 comments: