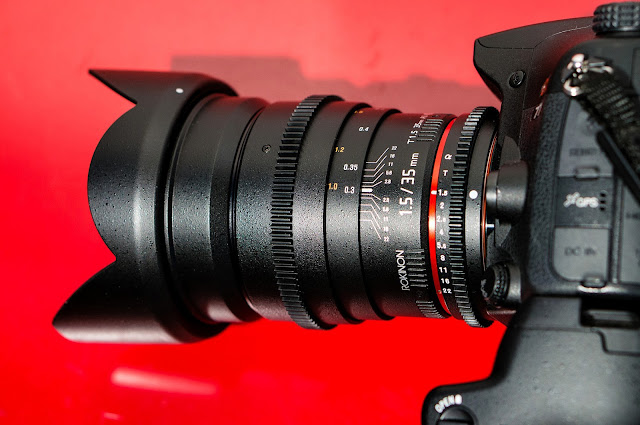 Loyal readers will remember that I took a chance a few weeks ago and ordered the Rokinon 85mm 1.5 Cine lens and have been pretty much delighted by the whole package. I found it to be sharp, easy to use and a nice tool for recording video. The focus peaking in the Sony cameras is helpful in using this lens for video production.

I was feeling so euphoric about the 85mm that I started looking around to see what else Rokinon offered in it's Cine window dressing.  I found two other lenses that piqued my interest; one is the 24mm 1.5 Rokinon Cine lens and the other is the 35mm 1.4 Rokinon Cine lens. At around $750 for the 24 and around $550 for the 35mm neither of them really pushed me to commit. It might be nice to have one or the other, or both, but without a pressing need for either it was hard for me to justify spending that much money on focal lengths that I already had covered by zoom lenses or APS-C style lenses. I'm trying to be a prudent business man, after all... 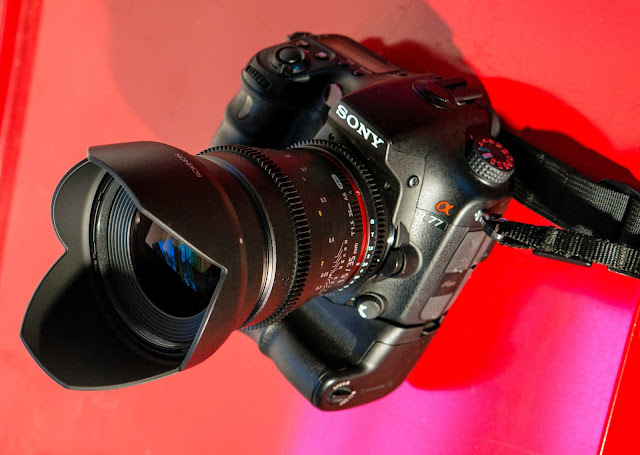 But curiosity is a dangerous thing. After a couple of successful video projects with the 85mm lens I started flirting with the idea of the 35mm and I kept heading back to the web to do my "research." (research = photo nerds progressively talking themselves into buying the right thing, a good thing, the first thing that comes up on the web page, anything!!!!). All of a sudden Amazon drops the price on the lens I've been looking at and it's almost $200 cheaper than it was several hours earlier. Ever the careful steward of my family's budget I put the lens in my online shopping cart, you know, just to see if the price drop was some mistake that would be rectified by, you know, putting it in your shopping cart.... But no. The price stuck. And the free shipping. And the 2% rebate. I stood up and walked around the studio. I circled back, totally captivated by the lens in my shopping cart. And then, like magic, I remembered a job we might be doing sometime in the future where we might need to use a lens like this one.....maybe.  And that was enough for the little part of my brain that sprays out buying endorphins and makes the rest of my brain get all excited about acquiring stuff.

He hammered the logical part of my brain with an huge does of endorphin/anaesthetic and the next thing I knew my trembling hand and my quacking finger hit the One Click buying button and the electronic race was on to empty my credit card and fill me with remorse.... And then what happened? 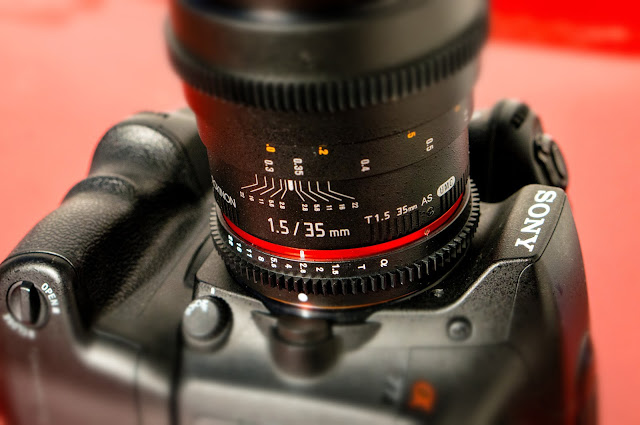 Oh yes. Well, when I got back home from lunch and coffee with a new friend who came all the way from Washington DC just to photograph in Austin, there was a box waiting patiently by the front door. I popped it open and all the remorse vanished like weak steam on a hot, dry day. There was the new lens. And it was huge and gorgeous and mostly black. I put it on the closest Sony camera I could find, popped on a few lights and started playing. Sharp wide open. Sharp at 5.6. Sharp in the corners from f2.8 on down. All tricked out for video production. Equally capable of snapping towels in the still production locker room. This one is fun. 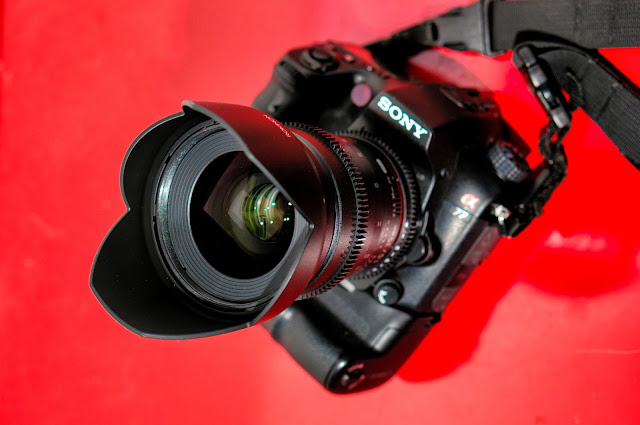 Sony has a 35mm 1.4 that's a re-tread of a Minolta 35mm 1.4 and it's supposed to be okay once you stop it down a bit. It was originally designed for film and not the vagaries of a digital sensor. I like that the Rok 35mm is a new design and uses an Aspheric element. But mostly I like that it performs well at (for me) nearly one quarter the price of the Sony.

So, what do I gain and what do I lose? In the big picture I lose my pretension of self control when it comes to buying shiny toys. In the smaller picture I give up automation and auto focus and small size and I gain a clickless aperture, very good performance, a lens that can be used immediately with industry standard, video follow focus accessories and a lens that looks very sharp even at its widest aperture.  I'll take it.

If you'd care to join me in my complete surrender to unfettered spending you can find the same lens in Nikon and Canon mounts as well. Shop hard or wait till one of those momentary price drops hits. I'm having fun playing with this one. Still samples and video coming soon.