My new camera is pretty damn good. Not better than the ones I already have but really good for $599. It's called a Sony a58. 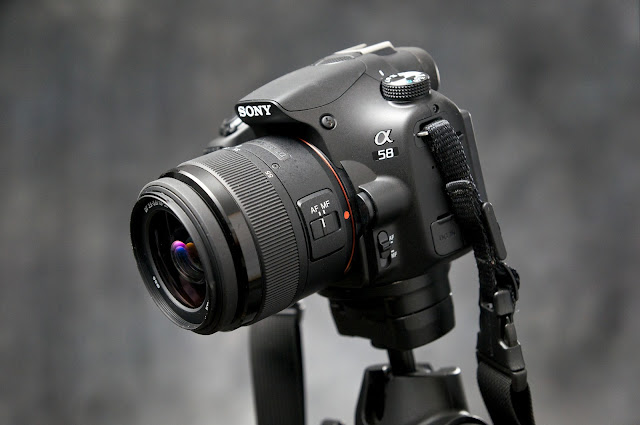 I bought a new Sony camera yesterday afternoon and I've been using it non-stop ever since. It's small, light, radically cheap to buy and it came with its own kit lens for a whoppingly small $599. I could have waited for Amazon to get them in stock, they're showing on their website that they'll have cameras to ship to people on their waiting list on April 21st. I thought I'd shorten the process and just drive up to Precision Camera, shoot the breeze with my sales guy, Ian, and pick one up while I was there. That's exactly what I did.

Lots and lots of photographers who use Sony cameras are lining up to buy this camera as a back up camera or a secondary camera. And, of course, there are the usual contingents of "Sony experts" who are throwing themselves into impassioned denouncements of the new model claiming that it's ten evolutionary steps backwards from one of the two cameras it's replacing. Are they right? In one or two regards, sure. In toto? NoNo.

Now that we're well over a decade into the digital age what exactly does $599 buy you in a camera? Let's start with the sensor. Sony is the sensor maker of the moment. What they've chosen to offer in their cameras is not necessarily the least noisy sensor but the result of a different outcome in the typical design compromise. Seems you can have detail, saturated color, accurate color, low noise and wide dynamic range but, like everything else in real life each engineering choice in sensor design tugs at some corner of this inventory of attributes. If you want the ultimate in high ISO low noise you may just have to give up color accuracy and wide DR. If you want the highest amount of detail in your files  you may have to put up with a bit more noise. Etc.

Sony seems to be designing the sensors in their camera line to maximize two attributes, color accuracy and dynamic range. The sensor in the a58 is a new one with 20 megapixels. I've shot two portrait sessions with it so far and can report that the image is very sharp which might point to a weaker AA filter, given that one would be less necessary as the number of pixels rises. There's none of the "rounding" effect that many cameras seemed to suffer from several years ago.

I'm not through shooting all my tests but I do know that this camera is one of the first cheap Sony's to use the adaptive noise reduction feature that debuted in the a99. I don't have any deep knowledge about adaptive noise reduction other than what I've read but it seems that the camera applies varying amounts of noise reduction based on the detail concentration in different parts of the image frame. Almost the way a Jpeg algorithm is programmed. The areas with lots and lots of fine detail work better with less noise reduction since the noise reduction also reduces the impression of fine detail while fine detail hides monochromatic noise. Large areas of low detail like skies and some renderings of human skin inherently have much less fine detail so when noise is present there is nothing to mask it. It stands out like a sore thumb. I don't know if that's what I'm seeing in the a58 but the rendering of fine detail is at 3200 and even 6400 while the noise treatment in flat areas is much improved over the a57 and even more so over the a77.

The camera follows the new Sony program of replacing moving mirrors and expensive, and heavy, glass pentaprisms with electronic view finders. People who've been in photograph for a long time seem to have a knee jerk reaction against changing viewing methods but among those with open minds it take about a week of using a full information viewfinder before they start saying things like, "I'll never go back to an optical viewfinder..."

The finder in this camera is better than the one in the a57; one of the cameras the a58 replaces. The a57 used an LCD screen with a resolution of 1.44 megapixels but the new camera uses an OLED screen that seems much more transparent and color rich.  Neither is as detailed as the EVF screen in the a99 or the screens in the Nex 6 and 7 but it's a clear improvement over the LCD design and one of the major reasons I bought one of these new models.

The main reason I wanted this camera was to have a third video camera at multi-camera shoots. I tend to use my a99 as the primary camera and I actively operate it for interview and content work but as I learn more about editing and programming I'm finding that it's always great to have alternate angles and alternate magnifications of the same scene so that I can cut away from the main shot in editing and make my programming less boring. The a57 and a58 can each be set up on their own tripods and all the cameras can run as we shoot a scene or an interview. We can generally sync up using the sound we capture on each camera's microphones while using the audio from the a99 (through external microphones) as our main sound source.

The Sony's look best to me at 1080p 24fps in mp4. If I'm editing that's what I normally shoot. I am much less interested in stuff like 60fps (although we have that in two of the three cameras mentioned if I want it...) than I am in getting good, sharp content. Since I've had the best luck so far with mp4 files I tend to set them all to the same settings and go with 24fps at my standard.

This camera is slightly dumbed down in video setting choices. Sony have eliminated the AVCHD 60p setting from this camera and left it with on 60i (interlaced). I'm sure we can see the difference on moving objects but I'm not so sure we'll see much difference on stuff that doesn't move very much.

When it comes to video one of the main advantages of the whole Sony line comes with the combination of full time, phase detection AF and the always on EVF. You don't need to mess with add-on finders to see what you are doing on bright days or reflect-y interiors. Look through the finder as the photo-gods intended and you're ready to shoot. Add in focus peaking and manual focus becomes joyful and fulfilling.

With all the mirrorless Sony cameras I have you might wonder why I felt like picking up another Alpha SLT camera. I guess part of the reason is that I've acquired so many good, cropped frame DT lenses (like the 35mm 1.8, the 50mm 1.8, the Sigma 10-20mm and the surprisingly good and cheap 55-200mm. I originally bought these to use on the two a77 bodies. I've since sold them and replaced them with two full frame bodies. When I go to use the DT lenses on either the a850 or the a99 the cameras automatically default to a setting in which they crop down and deliver an APS-C file with only about 10 megapixels on it. I wanted a companion camera for the a57 for the times when I want to travel light.

And let's be honest, when you're walking around outside, using a camera handheld, you'll probably find (as I have) that there's very little difference in image quality between a $600 camera and a $3000 camera. So why carry all the extra weight?

I decided to buy one of these when I found myself looking at cameras like the Sony RX-100 and the Fuji EX-2. I wanted small and light but at the same time I wanted a good  EVF and the use of lenses I already owned. The a58 seems to fit those parameters.

So, on the plus side:

-20 good, clean megapixels.
-A totally familiar and easy to navigate menu.
-A standard flash hot shoe.
-Loads of gimmicky programs that can be useful (one of my favorites is the "smile shutter." You can ask the camera to fire when it sees a smile. Many times these days I'm setting up portrait lighting in the studio or on location and I don't have an assistant or a handy stand in. I set the smile shutter, sit down and smile. The camera focuses and snaps a picture of me. I can use that to progressively dial in my upcoming shots. A big evolutionary jump forward from the ten second self timer.)
-5 full size frames per second.
-Same standard battery as all my other Sony DSLT cameras. Yippee!
-Multi-frame noise reduction.
-Small size and easy to master exterior control interface.
-Cheap as dirt to buy.
-Well done EVF.
-Inclusion of time tested Focus Peaking for manual focus.
-Continuous live view with fast and accurate focusing.
-Battery life, energy management improved by about 20%.
-3.5mm microphone plug.

On the down side:

-Smaller buffer than a57
-Slightly smaller viewfinder but still 100%
-Slower frame to frame drive. ( since when is five frames per second slow? The present "holy grail" camera, the Nikon D800 only does 4 fps; unless you add a bulky battery grip, then it goes to 6 fps. Big deal.)
-You lose one setting in video. 60p.
-Smaller rear screen at lower (461,000) resolution. )More than adequate for setting menus. And that's what those screens are really there for.....).

I like it. It's a good camera and works well. The whole interface is very familiar to me know and Sony doesn't seem to be changing it much from camera to camera. We're finally getting back to the time when we can say, to some extent, that the camera is just a box to hold the sensor and the lens together in parallel. The cameras all have good image quality. This one seems just right for a lot of stuff I do. For sports where I need a high frame rate I'll probably pull out the a57 and party with the 10fps. But in the studio and just walking around this one is perfectly sorted. And cheaper than a much less virtuous Fuji X-20 (yes, that was also on the list...).

It's been a busy week. The rest of the fluorescent lights finally came in and I've started shooting with them. Kind of a fun way to go. We've got more video to shoot tomorrow and again on Friday. I'll try to get some behind the scenes images to share. I know a lot of people are interested in the lighting...

If you shoot Canon and Nikon then thank you for wading through this Sony review. You needn't switch. The newest, modern cameras are all good now and I'm predicting that Nikon and Canon will have their EVF cameras ready to go to the next big trade show. Really. 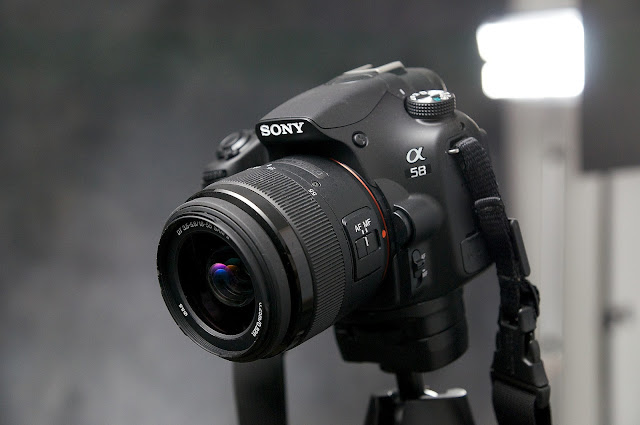 Posted by Kirk, Photographer/Writer at 17:12 20 comments: