Celebrating your successes. A record of happiness and fun. 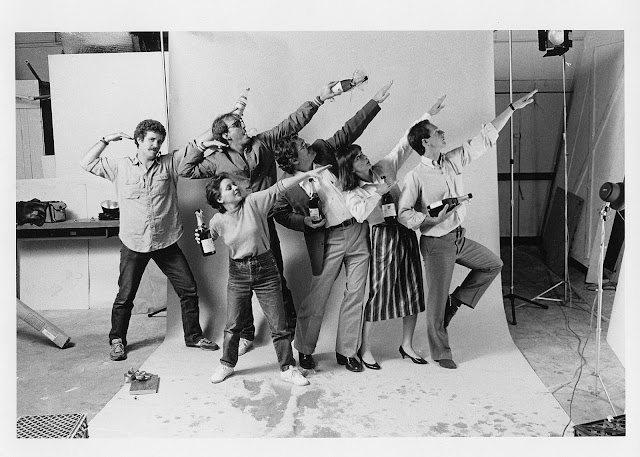 Many years ago I was the director of an advertising agency. It was an interesting time in the business. This image comes from a shoot we did in 1983 or 1985. Our crew had just finished shooting images for an ad campaign for a retailer who had upscale flower shops that also sold good Champagne and chocolate, as well as fresh blooms.

We we're photographing models doing explosive openings of Champagne and trying to capture the moment bubbly wine came rushing out and spraying all over the place. I can remember that we were shooting on a couple of Pentax 6x7 cameras and our lighting consisted of a bunch of Novatron power packs with their cheesy plastic heads.

Back then we capped every shoot by celebrating. We'd all have some Champagne at a shoot like this one, then we'd assume the "Jet Pose" and, if we were still reasonably coherent we might all go out to dinner at one of our favorite Mexican food dives.

Somewhere along the line photo sessions seemed to become more and more routine and we started only celebrating the big budget shoots. But when I looked at this image I was instantly reminded of the words of the CEO of a 1990's telecom company. His mantra to his "troops" was always: "Celebrate Your Victories!!!!" His company succeeded in "celebrating" through over a billion dollars of stock holder's cash in a little less than 18 months, so you know he took the idea of the morale building party seriously. And I was thrilled to be along for every mile of that sybaritic journey. :-)

I've decided to re-institute the idea of celebrating our victories and the victories represented by good shoots for my clients. Obviously, it's now a different time and the celebrations will be a bit more low key. But now, while I'm visualizing success, I'm going to remember to stock my refrigerator with a case or two of good Champagne. I'm just starting to remember that this is supposed to be a really fun career. Screw the recession. Raise a glass.

Celebrate your own victories and successes. There will be more than enough time to ruminate over the bad stuff...
Posted by Kirk, Photographer/Writer at 19:19 3 comments:

Friday. Thinking about intersections between gear, new synergies and portraits.

When you take the burden of flash out of the mix portraiture seems to be easier for everyone involved. I've recently added more continuous light sources to my inventory. In one case are five large LED panels. Just under that case are two, new V-Lights from Lowell (compact tungsten halogen instruments) as well as a couple of Lowell Tota-Lights. But the newest and, so far, the funnest new additions are the three Fotodiox Day Flo Max fluorescent fixtures. They all use Osram Dulux tubes and seem to have master most of the spectrum issues that plagued earlier fluorescent lights.

I'm using them with the Sony a99 and that's where the idea of synergy comes in. You probably know that the a99 has an electronic viewfinder. You probably also know that to work with studio flash in a productive way you need to turn to a setting where the image in the finder is amped up all the time. It makes sense. If you set f8 at 1/125th of a second ISO 100 for the flash and you leave the camera in the "Setting Effect On" setting (meaning that what you see in the finder is exactly what you are going to get) you'd get a dark, dark finder while working in the studio under 100 watt modeling bulbs. Change the settings to let in more light and then the flash exposure is wrong. But when set to "Setting effect Off" you are basically working with the camera the same way people with OVFs always do...with your eye compensating for the various brightness levels in the studio.

Switch over to continuous lighting and you never need to turn off the "Setting Effect On" setting in the menu. You are always operating in a mode of the camera showing you exactly what you will get. It's showing the effects of your settings.

So, in the portraits I did with the new flo's on Wednesday I set up a six tube fixture and pushed the light through a layer of diffusion. Nice and soft.  I added a second light to illuminate the background. You could see the effect immediately in the finder. Then I added a little bit of backlight from the smallest fixture with only one tube live and my set up was complete.

The second synergy comes with the way the a99 handles lower light. I have no hesitation at using ISO 400-3200 in making portraits. I'm old school so I really like to work at ISO 200 when I can. But it also means that I'm using slower exposures and that can introduce lack of sharpness due to camera shake. The elimination of the moving mirror goes a long way toward stabilizing the camera at 1/30th of a second, or really anything under 1/125th of a second. If I want to be hand held the combination of the fixed mirror and the image stabilization means decent handheld work with impunity at 1/30th of a second. Very nice.

The final synergy in working with continuous light and the Sony a99 is the electronic first shutter. Not only does it also reduce overall mechanically induced unsharpness but it also takes away the somewhat startling (for people not usually in front of the camera) noise of a typical DSLR camera's operation.

For me it's a much more pleasant way to work than with a moving mirror and flash.

Today I'm doing still life work and the idea of the synergetic interplay is the same. The continuous light allowing the use of any combination of shutter speed and aperture while the camera dutifully shows me exactly what I'll get before I even push the shutter.

In fact, if I were a conceptual artist I could forego the push of the shutter button and just describe, within the context of my manifesto, exactly what would have been in the frame and how it made me feel. Further, what it meant in the time line of the history of conceptual art. Maybe I just did...
Posted by Kirk, Photographer/Writer at 12:10