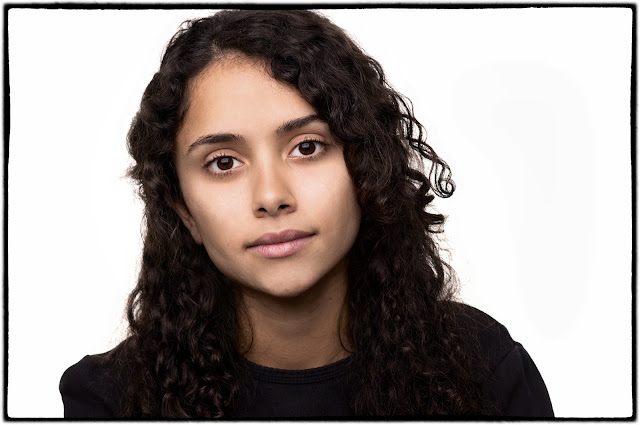 Just put the light in the right place and then work on seeing the person in front of you. At that point the technical stuff should take care of itself.

Back when we printed just about everything every photographer worth his Dektol at his own filed out negative carrier to use in his enlarger. The idea was that you could print everything that was on the negative. It was proof that you saw perfectly at the moment you pushed your fickle index finger down on the shutter release button. Shades of Henri Cartier-Bresson!!! While there are probably a thousand ways to make your own custom frames to fit around you digital images I find it easiest just to hop into Snapseed and customize one of their handy, pre-fab frames.

Most of the time they serve no purpose other than eliciting the ethos of printing in the wet days. But in this situation the background toasted up to white and I needed a frame to define where the white background stopped and the Blogger background begins.

I did some work on this photo in Snapseed. I turned down the saturation a bit. Because I think skin tones look more natural when they aren't Disney-saturated. I opened up the shadows and brightened up my subject's eyes to match the perception I had of her eyes while I was shooting. I was moving from objective reality to my subjective reality, via sliders.

I look at most of my RAW files as a vague starting point. And when it comes to portraits I'm willing to use every trick in the book to bring an image from the vague muddle of data that comes from my cameras into line with the pristine and always optimistic view my brain seems to store of my subjects. On any given image I might spend some time in Aperture (for just the right color and tone), PhotoShop (to repair blemishes and dust spots and meteor dust) as well as Portrait Professional (to get the eyes and the skin tones just right), and finally a wallow through Snapseed because I like the judicious use of the structure filter and the ease of adding frames and vignettes.

It's my job to guide your eyes and your intentions. I am not an forensic documentarian. My job is the opposite of strictly recording the median. That's for robots and surveillance cameras.

I suggest that we use the tools we have at our fingertips. The trick is to know when to stop. That's probably why I'm not showing the other ten variations. The bottom line is that the value lies in your original vision, not the cameras literal compulsions. Drag the image to the reality you saw in your heart and mind and the hell with the purists.

Posted by Kirk, Photographer/Writer at 23:30 8 comments: