Ben and I go out on an early assignment. 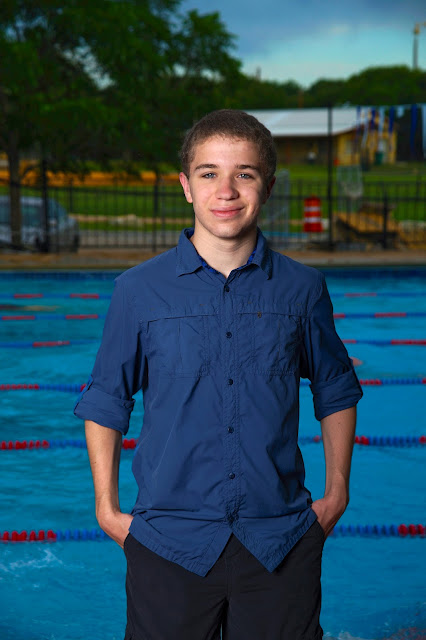 Early. At the Pool.

Can't get away from the pool and wouldn't want to if I could. Usually, at 7 am, I am over there in lane three or four trying to keep up with the other people in my masters program and the boy pictured above is out running with his cross country team, but this week is the down week after school lets out and we needed to shoot this project so I convinced Ben to assist me for the morning shoot.

We were commissioned to make individual photographs of the Rollingwood Waves Summer League swimmers and then do four big group shots of the different age groups. By the end of the morning we'd photographed 85 swimmers and the aforementioned groups and we were ready for iced tea and a couple of Las Palomas Restaurant combination plates.

We always like to show the pool in the background so we set up beside the pool deck, under a high canopy that would block most of the direct sun. My lighting was simple: I used an 1100 watt second Elinchrom Ranger RX AS power pack and one head. The head fired into a 28 inch Fotodiox beauty dish modified with a white diffusion cover. The metal reflector never seems to have the kinds of problems with wind that umbrellas or softboxes have and the light was between hard and soft. Mostly perfect for young swimmers.

I set up the light for each swimmer so that the bottom of the beauty dish was slightly above their chin line and that made for flattering illumination all the way around. The only technical aspect was to keep the look of the background (pool in full sun and pool with cloud cover) the same with changes in cloud cover and sunlight. Nice thing about cameras that pre-chimp is that it's so easy to see the background change. With an OVF your eye makes instant accommodations but no so (at least for me) with the EVF. It shows me the background getting lighter or darker in a very real way.  I adjusted the shutter speed of the camera to compensate.

Ben assisted me by handling the paperwork and the payment from parents. We're primitive on these shoots. The parents fill out the name of their kid on a sheet of paper and we have the kid hold up the sheet for the first shot, zoom in and make sure we capture a face and a name so that I have a clear identification of the child when I do post processing and order prints. Silly simple. A constant reference.

Also, Ben is better than I am at turning down  any unreasonable requests or parent drama (of which there was none).

I used a Sony a99 camera with an older, Minolta 24-85mm 3.5 to 4.5 zoom lens. Why? I like it just fine and the focal length range is just right. The flash was triggered by a set of FlashWaves radio triggers. I used the camera at it's 10 megapixel, highest quality Jpeg setting. The biggest prints will be the 5x7 inch group shots and the main lighting was unerringly consistent so it really wouldn't have made any sense to shoot RAW or even bigger. How much more time do you want to spend in post? How many pixels do you want to throw away?

We wrapped around noon and headed off to our favorite, neighborhood Mexican food restaurant and settled in for a nice meal. Another job, another notch on the tripod leg.

Posted by Kirk, Photographer/Writer at 16:42 2 comments:

Hello readers. I hear you loud and clear. You are not interested in hearing about video. We'll try to keep it to a minimum. Really. 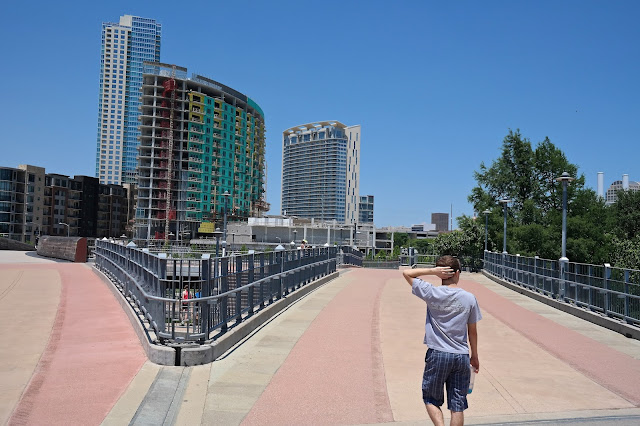 This is NOT a grab frame from a video...

Posted by Kirk, Photographer/Writer at 14:31 61 comments: