I'm thinking of writing a book called, The Anti-Flash Manifesto. It may be a weird idea but it reflects my feelings about what's happening now in the world of photography... 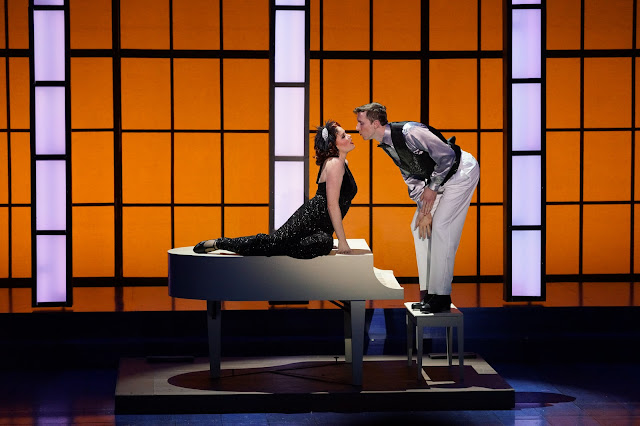 We see the world in continuous light and we embrace the constant stream of connected information from that continuous light as our pervasive reality; one critical part of our sensory perception, so why do we default to episodic and intermittent flash to make visual documents of our world? It's really wild. As photographers our mantra seems to be that it's all about the light but the light that it seems to be all about seems to be mostly artificial constructs of our memory of what real light is, as expressed by short flash bursts. Yes, images capture of moment of time but that's hardly how we see those moments or how we sense them. We see our images as a continuous stream and we're most comfortable catching moments from the stream, like a bear grabbing the unlucky salmon from a mountain stream. Seeing your life as a series of lightning storms....

I've been thinking a lot about our flash addictions. The reason flash came into such wide use in our industry has more to do with the rigidity of our early capture materials than it does with any aesthetic concerns. It also has to do with efficiency versus lux inefficiency. In the days of ISO 25 film and the need for rock steady images with no glimmer of motion the choice was often the use of electronic flash or flash bulbs versus thousands of watts of withering, direct lights. Now we can carry the equivalent of big light in a side pocket of our camera bag with portable electronic flash. But what have we lost?

I'd postulate that we've lost a delicate intertwining of all the different colors and qualities of existing and continuous light sources. We've homogenized color temperatures (which was critical in the days of film) but in doing so we've also homogenized our vision of what lighting could be and how it should be constructed. And in the process we've lost a certain range of voice that made so much art photography so interesting for so long. Over time we've come to understand that it's the little imperfections in art that are the source of interest or the source of engaging frisson and we long for them even as we evict the possibility of imperfection by the meticulous selection of tools that are reliable and consistent.

When I first started working with LED panels my linearly inclined photographer associates were immediately critical of perceived color spectrum failures and the horror of low light output. I embrace the visual differences and am excited by the need to work in the realm of slower shutter speeds and wider lens apertures. When I started working with fluorescent lights I loved the ability to "drag" the shutter and introduce slight movements and the sensation of breathing into portraits. How much more real it seems to me than the locked in sharpness of instantaneous flash.

And it's not even a factor to me that the cameras have gotten better and better at delivering pristine images at high ISO's. Once we learned how to make technically perfect files all that technique became boring and repetitive and bourgeois. The ability to make sharp images with no apparent subject movement became as desirable as making your own leisure suits. Uniformity of tools and purpose becomes an affirmation of a static status quo.

It's been a while since I happily reached for an electronic flash to use in making a portrait. I've surrendered to the wonderful mix of continuous light and live view. I love to watch the image of a person swirl in my electronic viewfinder, me alert, waiting for that perfect moment. Or that perfect movement which may, by its blurry motivation, make a more interesting image than one I could have captured by totally controlling the process.

I am doing a program this week that's all about portrait lighting. I've dutifully packed my studio flashes because I think that's what my producers really want the audience to see. But I've also packed and shipped several fluorescent panels, a Fiilex P360 LED light, a few LED panels and two hot lights just because I think they represent so much of what we've temporarily abandoned, out of necessity, and then out of routine, and I want to show how differently they impel and inform the process of taking a portrait. A rapport is a continuous and evolving process. It seems that the staccato intermittency of flash is at odds with the bedrock gestalt of that process.

If you've grown up with flash it may be an interesting experiment to play with and leverage some continuous light sources. Digital imaging is allowing us to reinvent and rediscover processes that served our industry ancestors both well and differently. Viva la difference. 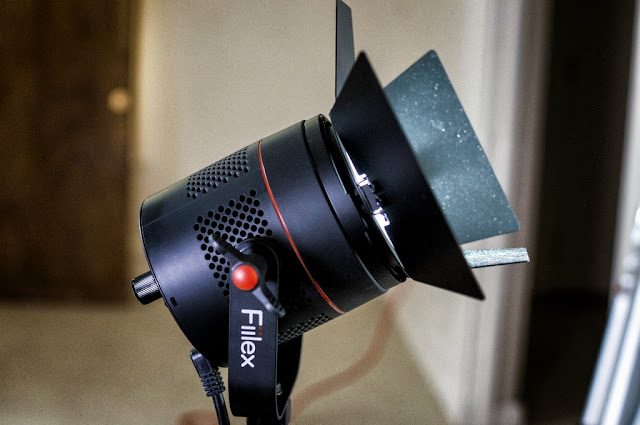 The Fiilex P360 kicks out good light, gives me tungsten to daylight color control and is dimmable from 100 % to 10% and fits in my camera bag. Thankfully, it doesn't flash. 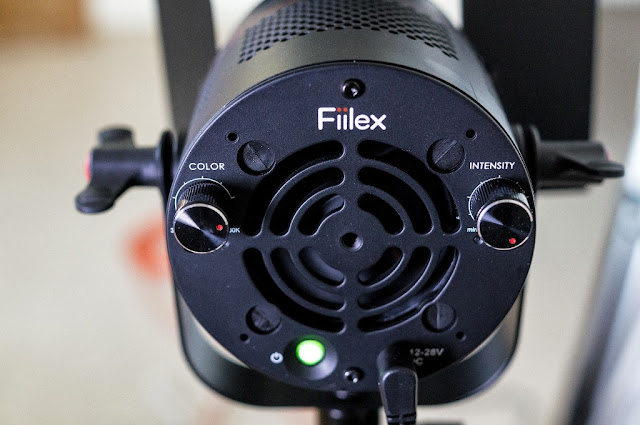 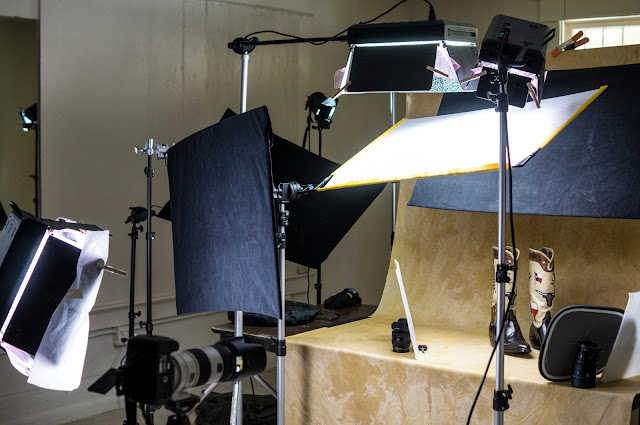 When I'm looking for total light control I generally put away the flashes and get out the lights that stay lit up for the whole shoot.
Posted by Kirk, Photographer/Writer at 20:32 12 comments:

The ongoing search for the best 50mm lens for my Sony cameras. 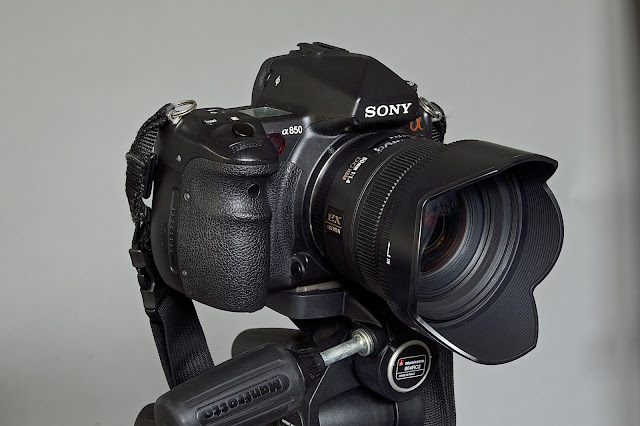 I seem to be running about four years behind the times when it comes to buying lenses. Today I went to Precision Camera to buy the lens you see in the photograph, above. It's the Sigma 50mm 1.4 lens and it's received both rave reviews and mixed reviews since its launch in 2008. While I love 50mm lenses on full frame cameras the only 50mm I had for the Sony FF cameras was the Sony 50mm 1.4. Its big advantage is its size. It's probably half the size of the Sigma lens. It's also pretty darn sharp in the middle two thirds of the frame. But I kept hearing good things about the Sigma except from people who think that a high speed normal lens's biggest aspiration is to be sharp from corner to corner, wide open. That's just not going to happen for a reasonable amount of money.  And while edge to edge sharpness is a good thing for people who like to photograph flat objects I've found that perfection sometimes gets in the way of art. We spend lots of time making images with ultra sharp lenses only to spend more time making the corners and edges soft so that by comparison our central areas seem even sharper.

By adding blur to the periphery of a frame with a person near the middle we also use focus to direct a viewer's attention to that which we want to emphasize. At one point, long ago, the people at Leica wrote something defending the idea of curvature of field and center sharpness in their fast 50mm lens. It made sense when I read it but I'm not going to drop into the rabbit hole of lens design versus shooting philosophy so you'll have to beat up someone else over that.

All mysticism aside there were two reasons I decided to buy this lens: 1. I've come to respect many of the offerings from Sigma over the last few years. To wit, the 70mm Macro, which may be the sharpest single focal length I've ever owned. And the 19 and 30mm lenses for the Nex are very good optics at very good price points. Even the 10-20mm wide angle zoom I bought last year performs beyond my initial expectations. It jumped nicely over the bar I'd set.  2. The other motivator was the drop in price engendered by a $100 rebate which has dropped the current price of this lens to $399. At that price it's hard to lose and it becomes almost a bargain.....if it delivers.

The 50mm 1.4 Sigma is a new optical design in a field of lenses that were mostly based on a Planar design from 60 or 70 years ago. It uses a molded aspheric element that supposedly goes a long way toward reducing chromatic aberrations and the rest of the design is supposed to have advantages in terms of reducing vignetting and increasing central sharpness.

I've only had the lens for short while but I've done some preliminary shots, both wide open and at f5.6 and I've been impressed so far. I'll spend some time with the lens tomorrow and hope to have some images to post on the blog.

Why the 50mm? Interesting question. I'll explain it with a story about an interview/conversation conducted by Ibarionex Perello with me and photographer, Seth Joel. Seth does corporate photography and his modus operandi is to use wide lenses like the 35mm 1.4 for Canon or Nikon, close in and nearly wide open. His photographs of people have lots and lots of background context. We were talking about different styles and when we turned to my work it was almost the reverse; very little background context and a much more isolated main subject. As we explored the subject further I admitted that I like the 50mm focal length but I love the 85mm focal length and, except for cliché uses, I just don't understand anything wider than the 50mm in any meaningful way. In fact, I'm heading to Denver on Weds. for a project about portrait lighting and the shortest lens I'm packing is the 85mm 1.5. I just don't feel really comfortable shooting wider unless I've already got cropping in mind.

If you love wide angles you do yourself a disservice following my example.....


Posted by Kirk, Photographer/Writer at 19:52 3 comments: