A small child in Colorado. Sometimes (usually) my favorite shots are the unplanned ones. 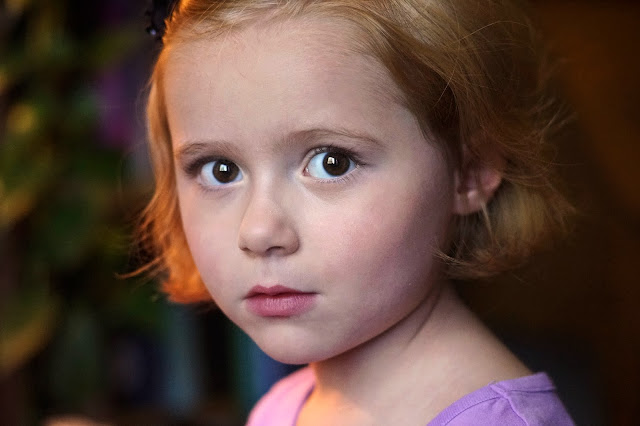 We were filming a video course in a beautiful house somewhere outside of Boulder, Co. The course is on how to take better family photographs. The young girl (above) was one of our models and she was in one of the work rooms watching the make-up person apply the finishing touches to one of the adults. When I'm not in front of the camera on projects like this I like to roam around and shoot production shots in a more or less random fashion.

I walked into the room and found my small model standing next to a window so I got down on my knees and smiled and took a few shots. It was already a cold, wet, dark and rainy day so the light levels were low. I was using my Sony a99 and letting it run free on auto ISO. When I came across this file later I had a look at the exif info. The ISO was 5,000 to give me a very hand holdable 1/160th at f3.5 with my favorite, lightweight 85mm 2.8 lens.

We have plenty of images of the child smiling sweetly into the camera but I like this one best.

Minutes later our model was joined with a horde of other small models and they proceeded to illustrate exactly how futile the best plans of grown up photographers can be when confronted with 2, 3 and 4 year olds.... I had fun anyway.

Posted by Kirk, Photographer/Writer at 18:09 4 comments:

The latest descendant from the Sony R1. The best bridge camera ever? 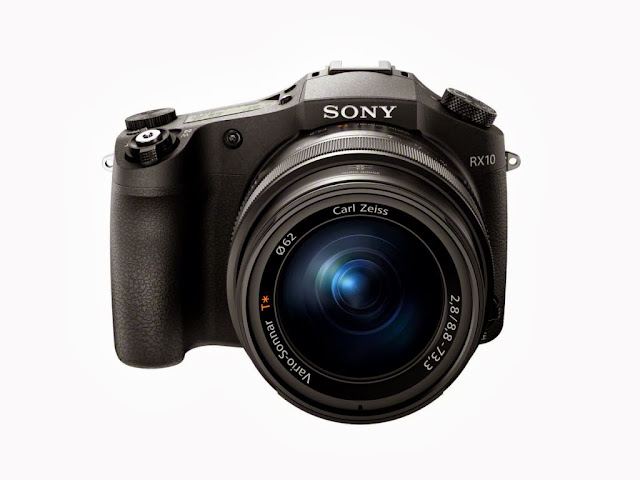 Let's see. First you take the sensor from the new Sony RX100ii (which is widely acclaimed as being.... a great sensor), couple it with a zoom lens designed specifically for the characteristics of that sensor by the people at Carl Zeiss, add in full bore, high def video capabilities and then package the whole thing with a very good EVF and a great LCD. Give it 10fps at full Jpeg with an unlimited shooting buffer and you're starting to put together a damn good camera. Not just good for the category or a good value for the price/performance matrix but a damn good camera overall.

Of course we'll have to wait for it to ship and then we'll have to shoot it for a while to make a final determination but it seems to me that Sony has a pretty exciting camera on their hands. In one quick release they've redefined the current bridge camera market. People will bitch about the price but I remember reading the review of this camera's predecessor on DPReview when it came out in 2005.
The editor hemmed and hawed and finally proclaimed that he was giving the camera two thumbs up because the quality of the lens alone justified the full price of the camera. This is the spiritual descendant of the R1. Sure you can get a Canon Rebel for less cash but does it come with a Carl Zeiss 24-200mm stabilized f2.8 lens? Not on this planet...

Who will this camera appeal to besides me? Well, with mic and headphone inputs+1080p HD video,  new higher quality video sampling, focus peaking even during video operation, and image stabilization as well this camera is an obvious contender with the Panasonic GH3 (or with the larger new Sony cameras) as a solid production video camera. They've even seen fit to supply a clean, uncompressed video output via the HDMI port! I'll try one just for the video.  But I know, I know.... you hate video and you wish it was never shoved into your camera.

So lets look at other applications. An all purpose, high quality travel camera with a Zeiss 24-200mm f2.8 lens on the front. After several recent trips with lots of gear I'd sure love to toss this into my carry on backpack and gleefully march through several major capital cities snapping great images to my heart's desire. It's not the lightest of the bridge cameras but it certainly will be one of the highest performing where overall I.Q. is concerned. Of course, if you're in it for superior/ultimate I.Q. you'll probably also be looking at the Leica Vario X. Hmmmm. The Leica might be a bit sharper but I'm betting the Sony will focus quicker, it obviously has a lot more lens range and the lens range it offers is so much faster than the Leica's. I'll trade that last one or two percent of potential quality for a image making monster like the RX10 any day.

Now, if they tell me it's also weather resistant we've almost certainly got a deal. Why? Because I've found these Quixotic Sony bridge cameras to be great values. Huh? Yes, I still have and still shoot with the original Sony R1 bridge camera from 2005. Why? Because a 10 megapixel APS-C size sensor (based on the sensor construction of that used in the Nikon D2x) coupled with an insanely good Zeiss lens means the camera is still a formidable picture taker. I bought the camera (actually I bought several of them) for around $899 back in 2005. I've shot it now for eight years. I've done high end commercial real estate brochures with it and have a glorious annual report for a large financial services company shot solely with R1s. Wonderful images and it was fun using the camera to take them. Those cameras have paid for themselves many, many times over and they're still rolling along making great images.

If I got that kind of use out of the R1 I can only imagine how useful the new RX10 will be when it comes to the new hybrid video/still approach we're taking with my business. The market is changing. If one camera at $1300 can do double duty and do it as well as the multiple cameras it replaces it seems logical to swim with the  tide instead of fighting against it. Maybe it won't work out this way when we have product in our hands but can you imagine running an entire imaging business with just two of these?  Nice.

Try my first Craftsy course (studio portrait lighting)  for 24% off.

Posted by Kirk, Photographer/Writer at 09:38 22 comments: