Half a week of craziness. And then some video. 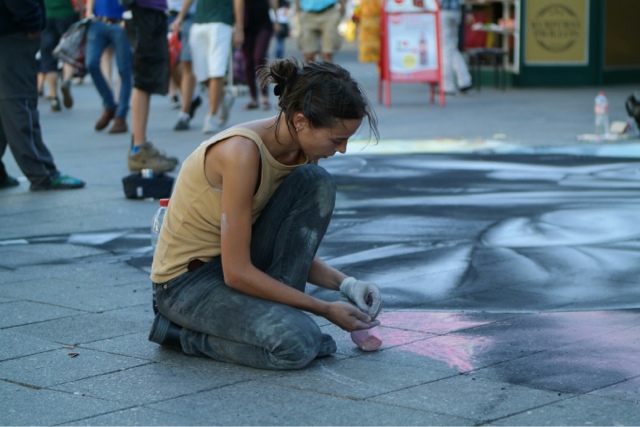 Sorry for missing so much time here at the blog. Don't know what I ate or if some disgruntled former VSL reader slipped something poison into my coffee but somewhere around 8 pm on Thurs. I felt some stomach pains which grew in drama and intensity and culminated in me spending the night getting to know my toilet much better than I had ever imagined. It was the most sick I've been in a concentrated time period that I ever remember. But as quickly as it came upon me the symptoms receded in an equally quick reverse trajectory. On Friday morning I was desperately tired and  sore but nothing hurt anymore and there was no urgent need for bathroom proximity.

I tried to make Friday productive but we had our first really big ice storm of the year overnight and all traffic ground to a halt. Good thing since I could barely make toast before having to lay back down and nap some more. A quick call to a couple of clients found them equally house bound and a round of rescheduling ensued. Sadly, the miraculous powers of physical recovery that I had in my 20's, 30's, 40's and the early part of my 50's seems to have subsided to a more normal, human level and I found myself alternately napping under a quilt or trying to stay awake long enough to make it all the way through a movie on the television. Fortunately, I didn't have to feel guilt for missing swim practice as the whole swim thing was cancelled for the day because of ice on the pool deck and the generally inability of anyone with a key to make it down the hilly, treacherous "black ice" roads surrounding the club and to open the front gate. I am almost certain that there was the usual crowd of obsessive swimmers waiting there just to see if someone would show up.

Anyway, I hope this explains why I haven't produced the long awaited for review of the OMD EM-1 versus the Nikon D800e or the New Hasselblad MF camera.   And, what happened to the long awaited review of the Zeiss Otus 50mm lens versus the Pentax 40mm pancake lens for the K-01. Or, for that matter the Otus versus the newest Lens Baby Optics.  I hope that it also excuses the missing essay on all kinds of equivalence as well as the essay on all the bright spots of today's heart warming, real life stories of how we're all using the built in wi-fi capabilities of our new cameras to make a difference for the better in the world these days. And you'll have to be patient as I put the finishing touches on my ground breaking blog about jettisoning Ming Thien's ideas about Sufficiency in camera equipment and replacing it with a call to buy  more and bigger and more often!!!

But seriously, I did venture out of the house today to help a friend shoot some cool video for a mutual friend for her Kickstarter campaign. She's the bandleader and singer for a really great quasi-country band. She and her band are trying to get a full length album produced and they've turned to Kickstarter to raise the money for studio fees and to pay band members. The funniest thing I heard in her pitch was the reward for donating $1,000. For that level of donation Rosie will have your initials tattooed on her arm!!! If she makes it big, and I think she will, you'll have visual proof that your donation made a difference...

We met at a run down club in east Austin that reminded so much of a run down club in just about anywhere in Austin back in the 1970's.  My friend Chris is the lead on this project and he was shooting with his amazing (and envy-worthy) Sony PMW-F55 CineAlta 4K Digital Cinema Camera.
(the above is linked for informational purposes only. VSL has no affiliate relationship with B&H).

We set up Rosie on a stage with red, velvet curtains in the background and red LED backlights. Chris was shooting the main camera and he was center stage and straight on Rosie. I set up a slider over to one side, put the Sony RX10 on it and shot tight, head and shoulders comp of Rosie for cutaways.
We recorded sound straight into Chris's camera using my Sennheiser wireless microphones with a lavalier on Rosie's collar.

The two Sony's both made images that looked great but since the PMW-F55 has huge pixels and a native ISO of something like 640 I'm going to presume that his footage will look a lot cleaner than my dinky cam  with a native ISO of 125 pushed to 1,000.  Doesn't hurt that he was shooting in 4K either.

We were humming along (like the refrigerators in the background---the ones we couldn't find the plugs to...) when we had a jarring sound interrupt a take. Something hit the ceiling tiles right above us and then scampered around for a while. It's always a bit weird to have nothing between you and wildlife than a much used acoustic tile ceiling...

We reviewed the footage and the audio before we packed up and it all looked good. I was going to use the wi-fi to upload my takes for Chris but doing 16 gigabytes that way....well it didn't look like the progress bar was making much progress. We opted to download it to an storage device instead. Now we have 16 or 17 hours of our lives back.

Chris and Rosie went off to celebrate over lunch and I trudged back home to take another nap.  I'm feeling better by the minute and can hardly wait to dive into the creation of a new blog debating the relative merits between PhotoShop 6.01.3 and PhotoShop 6.01.4.  Are the reds slightly better? Did this improvement come at the expense of inter-disinterspatial transparency in the final image? What about micro-constrast?  And how do we measure that?  Stay tuned.

Posted by Kirk, Photographer/Writer at 19:28 9 comments: