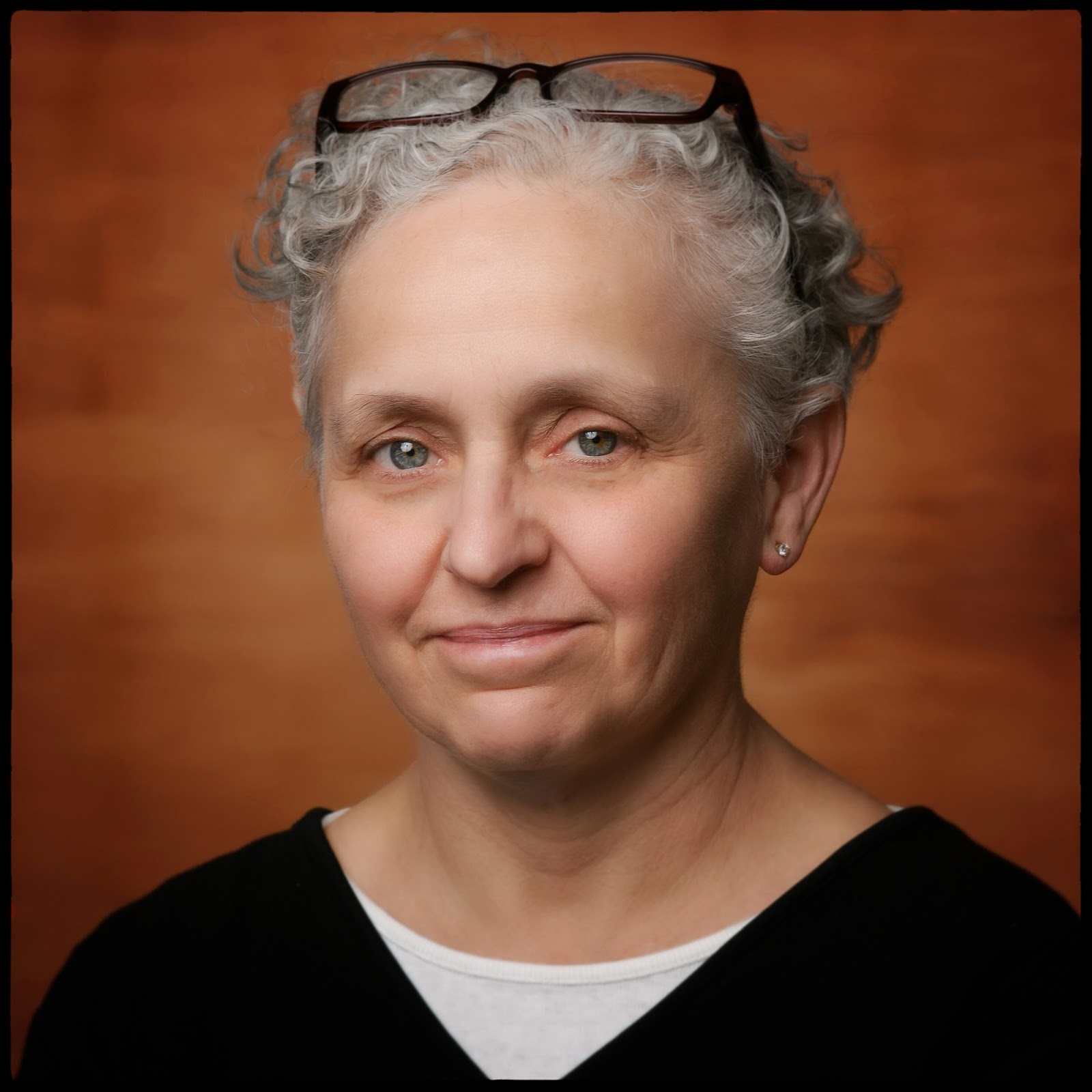 Poor Belinda. We have so many half finished portraits of her... So many times I say, "Don't worry about your expression/shirt/hair/something else, this is only a test." And I mean it at the time but then I look at an image and think that I really like it and I want to talk about the technique so I want to share it and the next thing you know it's up on the web, here at VSL and I'm sure she's mortified that people in France or Malaysia might be saying, "Can't that woman do something with her hair???"

So, I was too cold and lazy to go all the way to the other side of town to buy a warm, brown background for this afternoon's shoot of two different executives so I did what any self respecting eccentric does and bought a tube of paint instead. And I proceeded to paint onto a white seamless background.  It's actually a mix of paint and cold coffee. I thought, since we're in a drought we don't want to waste water.

I painted the background before lunch and it had big brush strokes in it but I figured it would dry smoother and after I had some cheese enchiladas everything would be okay. But it wasn't quite what I wanted in terms of texture so I decided to shoot some tests. Since every one in the universe is suddenly bored with the Sony RX10 I switched gears and decided that today's portraits would all be made with a Sony a850, at 100 ISO and to put an extra spin on things I'd use an ancient Hasselblad 150mm Sonnar f4 lens on an adapter with the Sony. Yeah, that all seems rational to me.

So I decided I'd need someone to sit in and let me play with the light so I could see  just how that background was going to work out. I walked into the house and cajoled Belinda and she came to my aid. 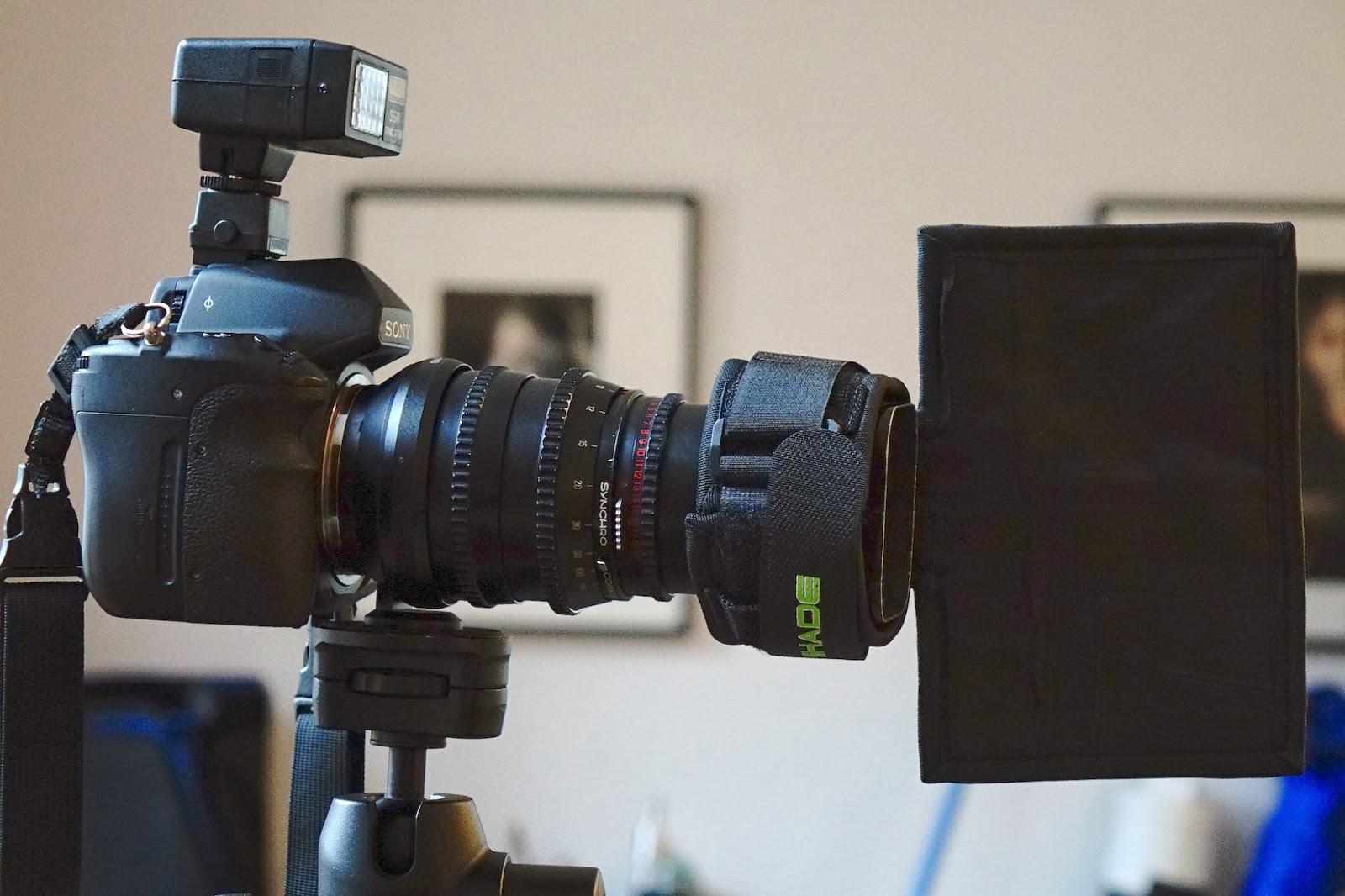 What a nutty camera rig. So, I have the Flex Lens Shade on the front of the lens. It can be bent to any sort of angle or position to block stray light. It's attached to the hood of the Hasselblad C T-star Zeiss  150mm f4. I have the lens attached to the camera with a Fotodiox H-blad to Sony A adapter.
The camera is an ancient Sony a850 shooting raw files.
The trigger on the top is a Wein SSR Infra Red trigger that I've had for 25 years.
Sooooo much more fun that a radio trigger. 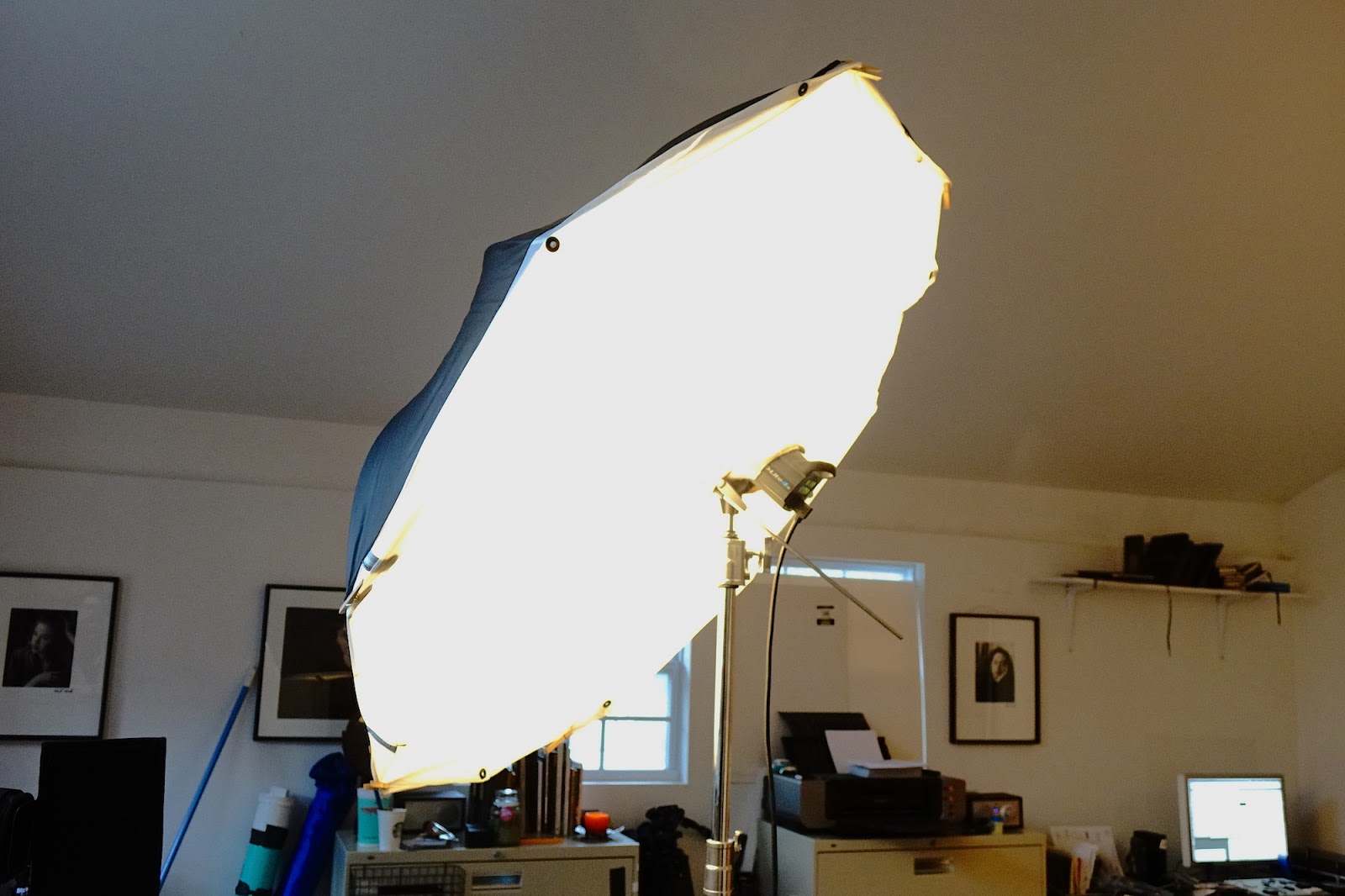 Here's my main light. It's some sort of Elinchrom moonlight firing into a Balcar Silver and White Zebra umbrella left over from the 1980's. It's covered with a Photek 60 inch soft lighter 2 sock.
Bang. Bang. Bang. 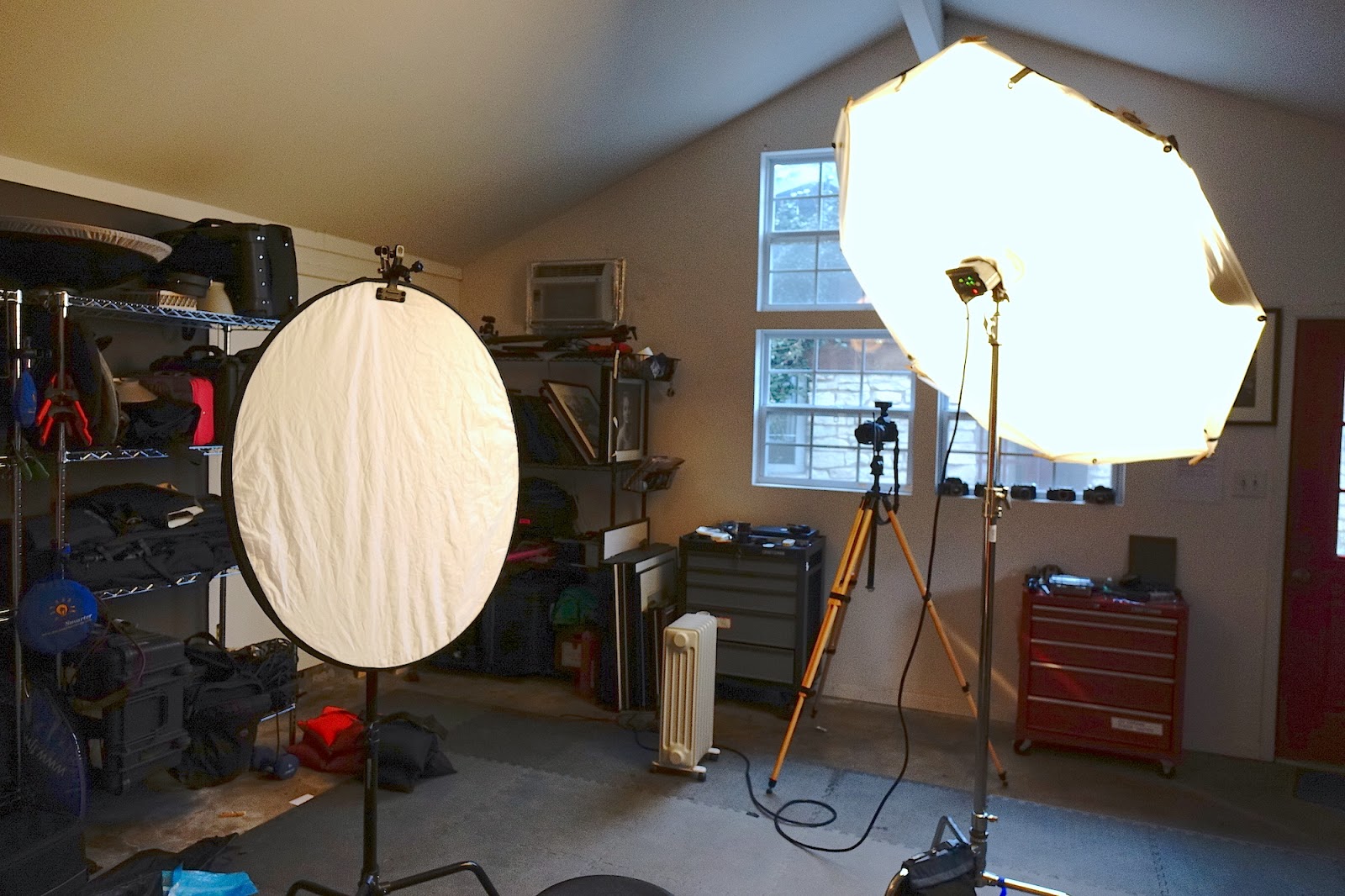 This is the reverse view from the back of the studio. Note the
pop up reflector for fill. Simple tech. 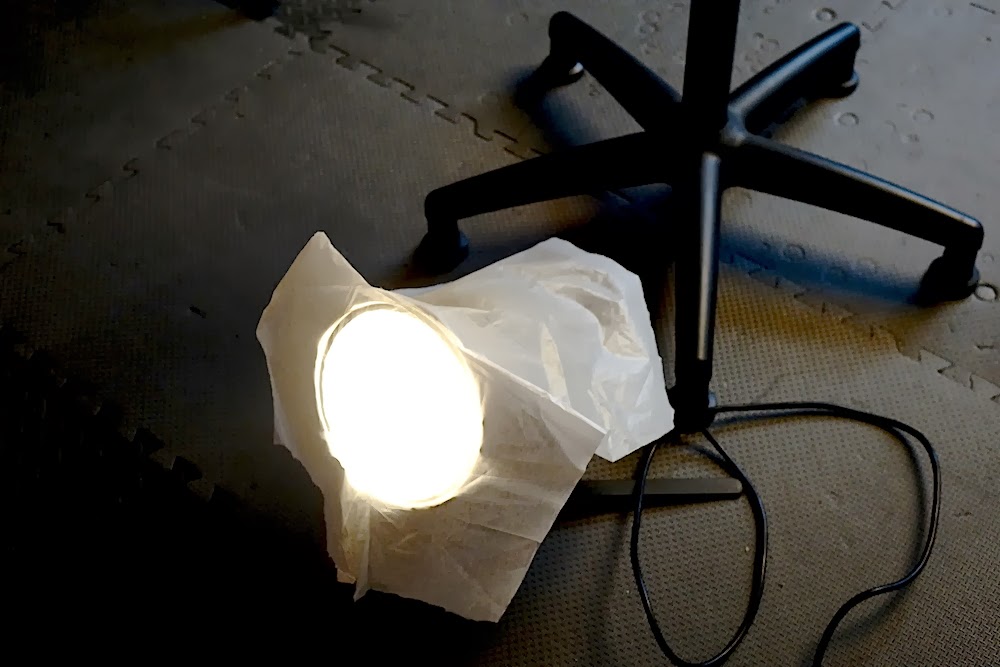 To get exactly what I wanted out of the background light I used a grid spot on it and then covered with with a sheet of diffusion. 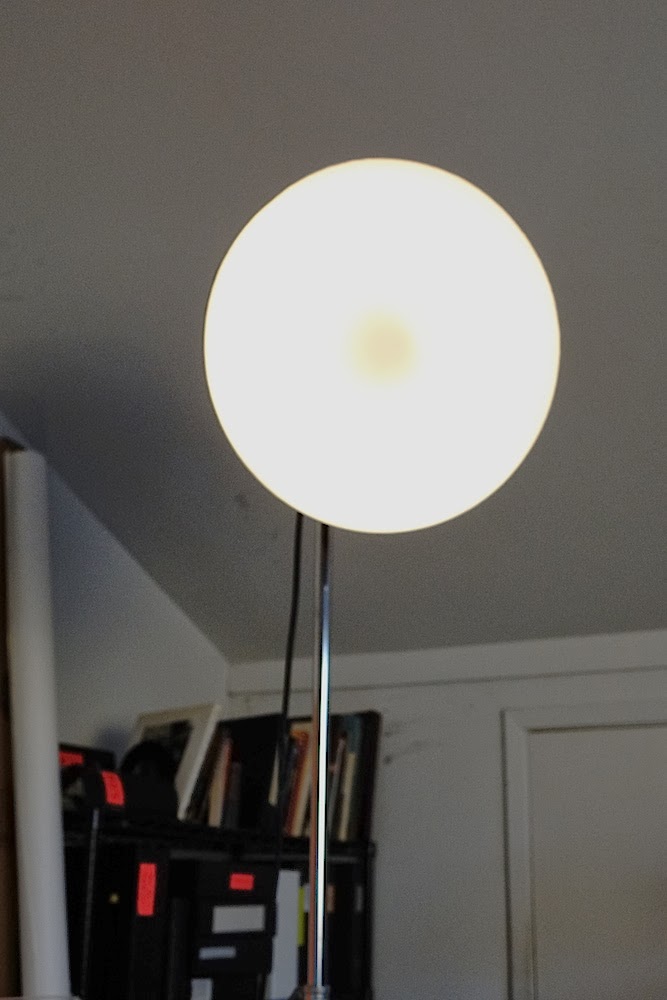 As we say in Texas, "This here's a backlight. It's another Elinchrom moonlight firing into a 22 inch dish, also covered with a diffusion "sock." 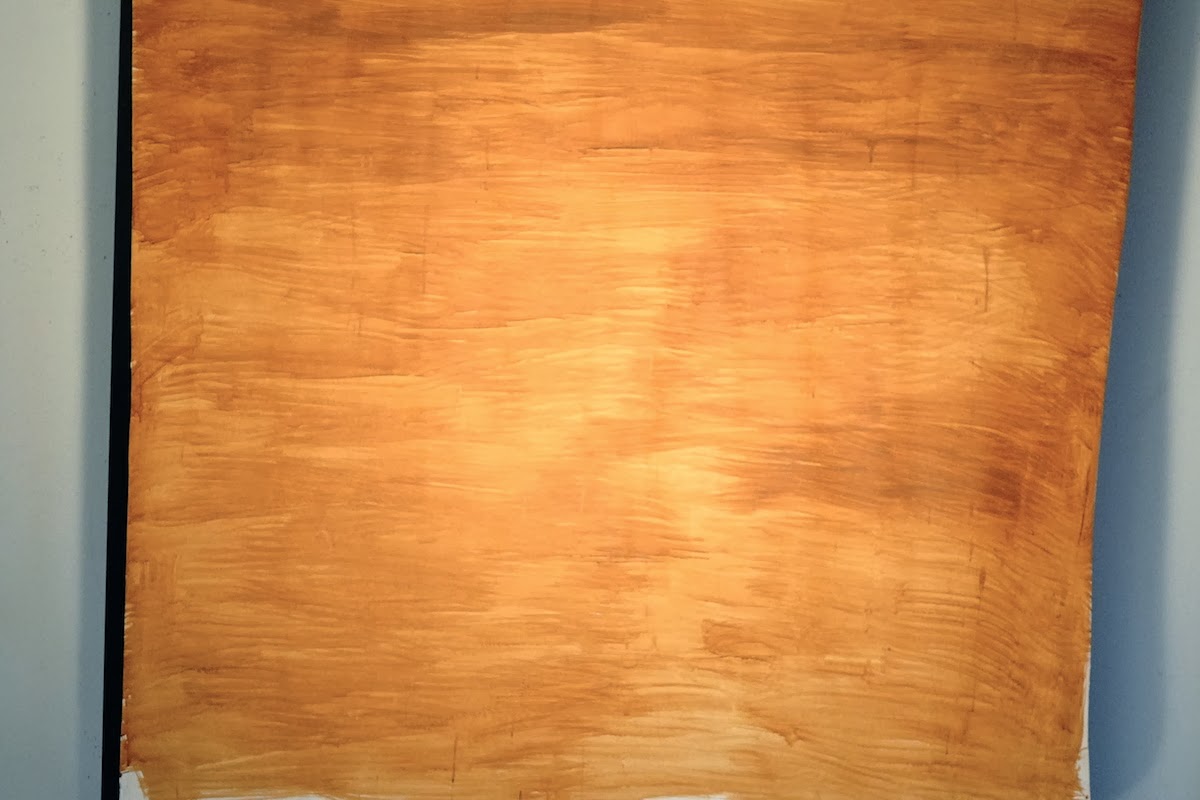 No shoot would be complete without the hand painted (and truly disposable)
burnt sienna background. 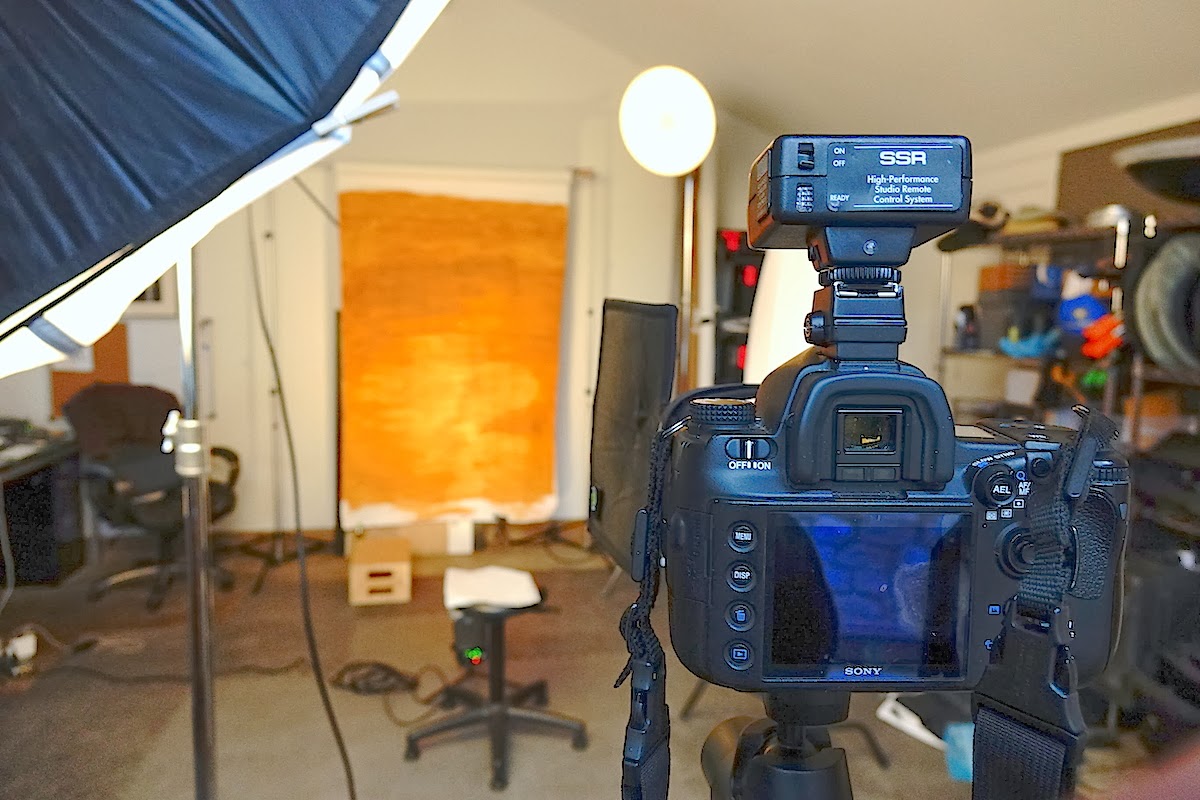 Of course, no article would be complete without the view from
where the magic all happens, right behind the camera.

So the test revealed that at f5.6 I'd get exactly the amount of texture I wanted in the background. The test was successful. f11 would not have worked. An hour later the client came in and we laughed and talked and shot images. The web gallery has already been posted and we're moving on to the next thing. Just another fun day in the studio.

I decided to type this right now just to keep my fingers warm....

BIG REMINDER: I'll be speaking at the state capitol at 7:00 pm tomorrow evening. There will be a room filled with young minds. I will try to say some smart stuff, some inspirational stuff and some motivational stuff. If I feel like it's not working out I'll just default to telling funny stories. Wish me luck.
Posted by Kirk, Photographer/Writer at 17:56 9 comments:

All material ©2014 Kirk Tuck and presented exclusively at www.visualsciencelab.blogspot.dom  If you are reading this on another site, without proper attribution it is not an authorized use of the material. If you are reading this on unauthorized site DO NOT CLICK on any links in the body copy as it may infect your computer with serious viruses. Sorry to have to put this warning here but a recent search turned up dozens of similar infringements. Thanks for your authentic readership. 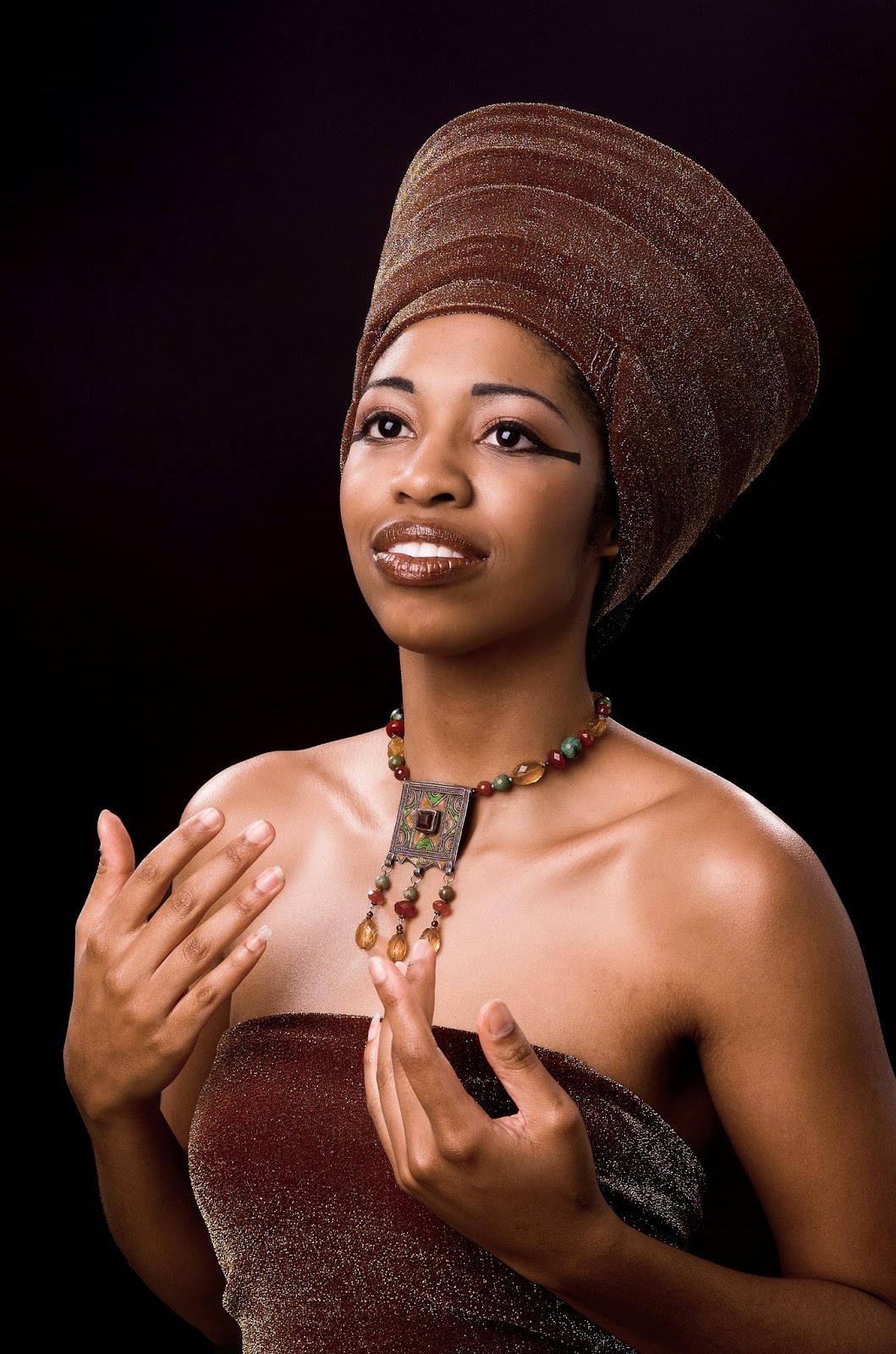 I've been cleaning up the studio/office and throwing stuff away like crazy. I've tossed out white formica and endless worn frames and pounds of shredded old invoices and correspondence. As the studio becomes less visually cluttered my desire to do more portraits seems to grow. Clean slate syndrome.

I was heading out the door to buy another roll of seamless just now. A light brown. Kind of a burnt sienna. But I detoured to Michael's art supply store instead and bought a tube of acrylic paint that matches perfectly. I'd rather paint what I need on the endless sea of white seamless I already own. Seems more fun and wastes less paper. Also saves me a long drive through our "treacherous" arctic conditions....still 26 degrees here in Austin.  Now, where did I put my paint brush?

The above was shot in the studio against a black background. Main lighting is a medium octabank while the backlight and side light are both small soft boxes used in close and at very low power. Shot on a Kodak DCS 760C camera with a Nikon 60mm micro lens. f 5.6-8

All material ©2014 Kirk Tuck and presented exclusively at www.visualsciencelab.blogspot.dom  If you are reading this on another site, without proper attribution it is not an authorized use of the material. If you are reading this on unauthorized site DO NOT CLICK on any links in the body copy as it may infect your computer with serious viruses. Sorry to have to put this warning here but a recent search turned up dozens of similar infringements. Thanks for your authentic readership.
Posted by Kirk, Photographer/Writer at 11:11 2 comments: