Shooting video with a Panasonic GH3 is too much fun and too productive. 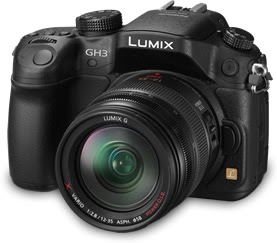 I've enjoyed using the GH3 since I first held one in my hands. For my size (five foot, eight inches tall) and the size of my hands it seems like a well proportioned and well balanced camera. I've always liked being able to use my older Olympus Pen FT lenses on it and in that set up I appreciated having a dedicated button to enlarge the frame for quick fine focusing. The finder could be better but it's fine for the stuff I do. And for a long time (relatively) I've mostly used it as a still photography camera. But not anymore. Now I'm excited to press it into service as a really good video camera.

Here's what I like about it for video: The camera has time code. That means the frame gets a time signature that stays with it and can be read by editing programs. That makes it easier to match up footage and figure out cut points. And the real plus is that when you are shooting with more than one camera you can sync up the time code of all the cameras. That means you can easily use the audio of one camera and the video from another camera and cut between them with all the motion in the frames matching each other and matching up with the sound.

At first I thought the only way to change video levels was in a menu. That would have really sucked because it would mean that you can't "ride the levels" (making ongoing adjustments to mic volume) unless you stop shooting and go into the menu to adjust. Though the thoroughly opaque owner's manual was of no help the web was and I was led to a touch menu that lives under a tab on the rear LCD. Touch the movie camera icon and four icons pop up on the right hand of the screen. Touch the bottom icon, the microphone icon, and up pops a control interface that allows little tweaks or big jumps in levels while you are shooting. And, as a bonus, you'll see the levels on the LCD screen or in the EVF (if you have that display mode enabled).  Speaking of audio I find that I like the position of the microphone input and when using one of the higher res. (dot)MOV codecs the sound from the camera is good enough to never require you to go to an external recorder. Especially if your microphones are good.

The camera allows me to change shutter speeds while shooting as well as ISO. Since I'm cutting between two or three cameras I know that if I need to make an adjustment to something I'll have something to cut away to but being able to do these two things on the fly might mean getting or not getting a key shot.

Another aspect of the camera that I like very much is the size and stamina of the battery. I shot video all morning long yesterday and we didn't need our first battery change until four hours in. That's with long video takes and a constantly on LCD panel. On for shooting. On for menu changes and on for reviews on the go. It's remarkable for a m4:3 camera and, in my opinion, makes it the only m4:3 camera I'd want to use on all day projects and long video sequences. Yes, you can buy lots of aftermarket batteries for other mirror less cameras for not much money but your job is really supposed to be imaging artist, not power management and operations crew....

Another point in this camera's favor is that the rear LCD seems remarkably well calibrated to the image content you'll end up editing on a calibrated monitor. Could be that the EVF is more of an afterthought --- it's not quite as accurate. But the LCD is like having a perfectly calibrated monitor living on the back of your shooting camera.

The final benefit of this cheap to buy, joy to use camera is the sheer quality of the footage (antiquated term?!). It's remarkably detailed and comes out of the camera ready in most cases for direct use. Much more detailed than the content of my much more expensive and cumbersome Sony a99. On par with many of the dedicated video cameras my friends in that business tote around. When you consider the real world price point it's almost too good.  If you are struggling to generate consistently good video content with a stock, $3300 Canon 5D mk3 you might consider dropping less than a grand on a GH3 and getting some really good work done. You can always tell your client you have a Canon 5d3 but you won't have to spend time grading the footage, etc.

One of the things Ben and I did yesterday was very fun. We used a Rokinon 35mm 1.5 lens, nearly wide open on the GH2 and we marked near focus and far focus on the focusing ring with a china marker. As Ben moved the camera for the shot (transitioning from minimum close focus to a person 30 feet beyond) I rolled focus from mark to mark for perfect, narrow depth of field transitions. What fun. Beats having to do it with the camera's built in AF.... Our hand powered motif was accurate, spot on and speed controlled to our liking every single time. Magic.

Just thought I'd give the tools a bit of praise...

Posted by Kirk, Photographer/Writer at 15:33 7 comments: