If you think, as I do, that all cameras are really good these days then now is the time for bargain shopping.

Or, how to make your hobby (or business) less of a financial drain... 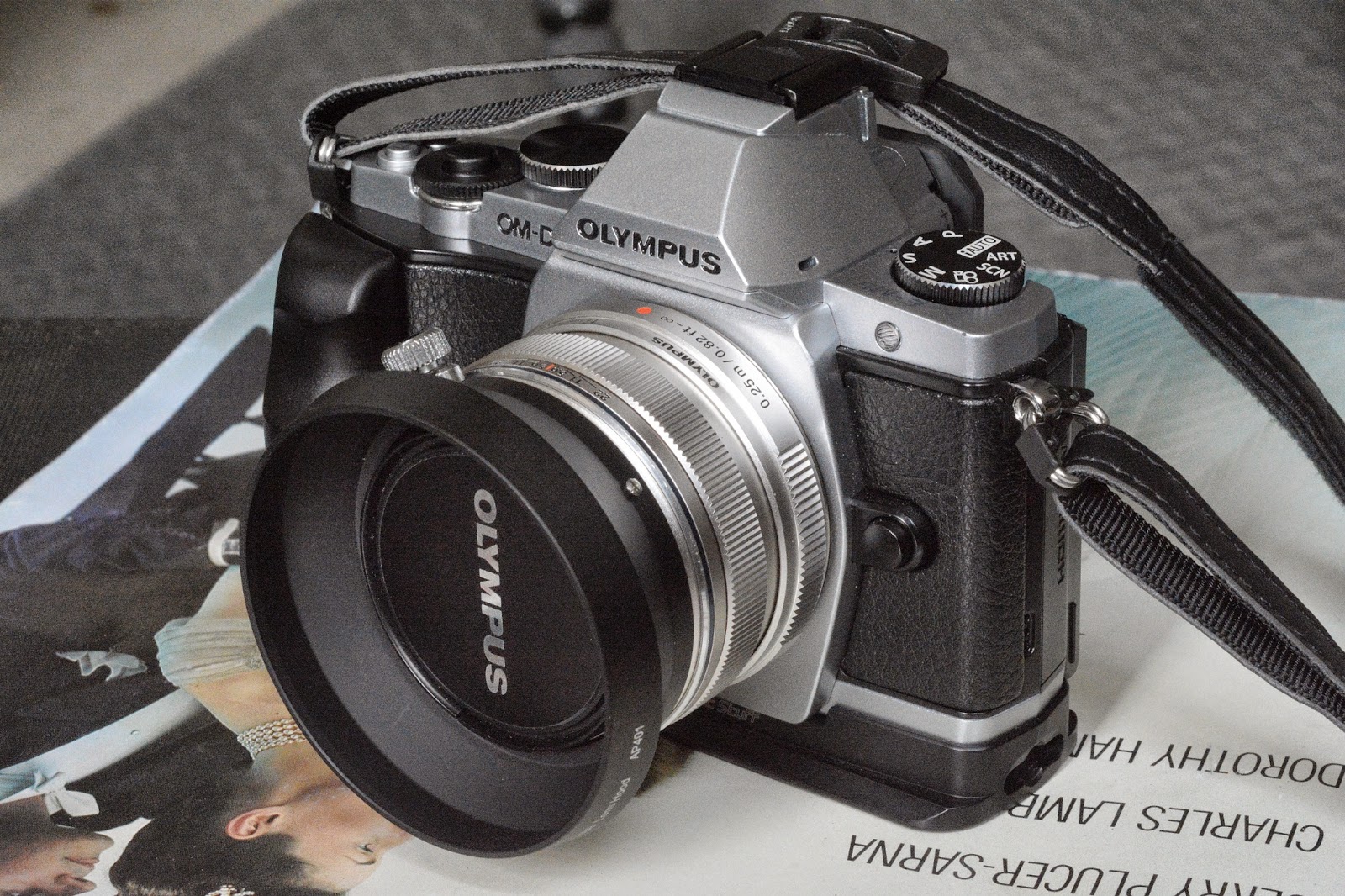 Can we talk? You and I love to buy cameras and lots of other photographic stuff. I actually write about new gear on my blog all the time so you'd think I'd be racing to the poor house with my incessant gear purchases, right? Well, maybe not so much. You see, I like to wait for everyone else to buy the gear first and work out the bugs, then use it for a while and figure out the best workflows. Then I kinda hang around until they get a whiff of the newest stuff and get the urge to upgrade. At that point I get interested in the gear and buy it used. Never for more than fifty cents on the dollar.  If I don't like it I can almost always sell it a bit further down the road for more or less what I paid.

Now, I don't always work like this. I ran out and bought the new Panasonic GH4 when it came out because I had specific video projects that I knew I wanted to use that camera for (and make money with) and, being the first real user 4K camera on the market it's not like I had older, cheaper options to consider.

But more often than not I try to love old cameras more than the latest cameras. Especially the ones that earn universal kudos before they are put out to pasture. One of my favorites was the Sony a850. It was an almost identical copy of the a900 full frame, 24 megapixel camera but in came out about a year later, cost $1999 instead of $2799 and was the absolute cheapest way to get into a full frame and 24 megapixel cameras at the time. I probably had a sales associate pull one off the shelf twelve times so I could play with it and even though I wanted it I knew I didn't "need" it. Not at the full price.

Early last year I found one in great shape for around $850. Now this was before the launch of the Sony A7 cameras and, for a Sony user, the full frame choice of the moment was the a99 at $2799. I bought the a99 and paid the new toll but I couldn't see paying that again for a back up camera. If you aren't a professional user you might not need a back up. I do. It's total paranoia on my part but I can't go out on a shooting assignment without one. My brain just won't let me. Too much liability...

So I finally plunked down money for the a850. It was a great camera. The used one I bought was half the price of a new, APS-C, Sony a77 at the time. It was an amazing bargain for a studio photographer. When I bailed out of the Sony stuff this year the a850, used for another year, brought me exactly the same amount of money back when I sold it. Even Steven. I basically got to use, play with and leverage a fun, full frame and very professional camera for a year----for free.

I don't always make such good bargains but then again I generally only lose money if I need the new technology (thought I needed the a99 for video---I was wrong) or if a camera is so lasciviously captivating that I can't extinguish the flames of desire and have the money in the bank. I lost as much money when divesting of the a99 as I initially spent on the a850. That's the price of having the camera of the moment.

If you look back two years in the VSL archives you can read my high praise of the Olympus EM-5. I think it's the camera that really made mirror less cameras legitimate in the eyes of the center of the Bell curve consumers. But I was over equipped at the time it was launched with various Sony cameras and couldn't justify paying the "opening season" premium for the camera and the requisite lenses. Since that time I've watched legions of photographers gush about the quality of the files, the colors and the incredible in body IS. I envied them but I bought practical stuff like the Panasonic GH3's that I've used for a dozen video projects and nearly a hundred still shoots. I also knew I needed the video capabilities of the GH4 before I needed the particular attributes of the EM-5 for my style of business shooting but I never lost my admiration for the product and the engineering.

A friend recently upgraded to a brace of EM-1 cameras, and a GH4 to keep his GH3 company. Feeling a bit overstocked he was ready, after two years of  EM-5 ownership, to lighten his inventory and sold me the two cameras at an amazing price. Less than half of the new price and paired with some great accessories which further sweetened the deal for me. Wow. These are great, low mileage cameras and I'm enjoying them as though they were brand new to me.

Essentially what I'm getting at is that we've pretty much reached the consensus that cameras have hit a point of quickly diminishing returns. The stuff that was on the market two years ago isn't just half as good as today's products it's something like 98% as good as today's products and in some cases (many cases?) you'd have to be practicing pretty damn precise and careful techniques to see the difference. So----why pay for incremental improvements you are hardly likely to perceive?

I was motivated to write this after a trip yesterday to purchase a cheap lens at Precision Camera. There I saw several fervent photographers getting ready to trade in Nikon D800's and D800e's in order to purchase the new Nikon D810. Now, I know that the new camera sports the same number of pixels and most of the same features as the cameras it is replacing but I also know from reading what smart, experienced shooters have posted about how small and incremental the actual, visible quality differences are. Most will be obscured by lenses that aren't of high enough resolution to resolve those differences.

How old is the oldest D800? Is it two years old? Has anything in the 35mm format come out that trumps the performance by a discernible amount (and I mean discernible to mentally healthy people...)? Not that I know of. So I marveled at the folks who would willingly lose about $800 to $1,000 on the trade. What is it that they are seeing that I don't get? Doesn't matter. If they can perceive the difference, and value it, that's all that matters.

But going forward here's my suggestion for truly enjoying the gear end of the practice of photography:  Buy stuff used! There are tons of used lenses and used bodies that are wonderful to work with but have been replaced by newer models, most of which don't add much to the spec list.

I was combing the web and looking at bargains last week. Here are some I found:

The Fuji EX1 with the 18-55mm zoom lens (the fast one), in almost new condition for $600.
The difference between the EX-1 and a new EX-2? The finder is a bit better in the 2 and the screen on the back is two tenths of an inch wider. The sensor and the imaging pipeline, as well as the lens, are identical. And both of those camera have the identical sensor and imaging pipeline you'll find in the Pro-1.

You need a faster, more traditional body with class leading performance? Smart guy, Thom Hogan tells me that there's only 22% difference in resolution between a Nikon D7000 at 16 megapixels and the newer D7100 at 24 megapixels. His take? Not enough discernible difference for most people to care about at the final file sizes 99% will use. A new D7100? About $1100. A lightly used D7000? About $500. The difference in operation? Minimal.

If you are mostly a mirror less shooter or APS-C shooter but you've always wanted to play around with the full framers (not for the resolution but because you know that perspective and depth of field is different) you could ante up for a D610 or a 6D from Nikon and Canon respectively or you could pick up a lightly used original Canon 5D for a whopping $600. My friend Paul and I were fondling one yesterday at the camera shop and it looked as though it had just been taken out of the box for the first time. The tariff? $600.  All the depth of field magic with the nasty depreciation already sucked out of the camera.

The 17mm Olympus 1.8 lens above retails for around $500. The one I bought is in great condition and cost me less than $350. It works just as well as the new ones.

We could go on and on but it's not like the old days where the jump from three to six megapixels was amazing and career changing. It's not like the days when Nikon and Canon jumped from six to twelve and then to 22-24 megapixels. The changes are a lot more subtle and they are happening at a slower pace. For all intents and purposes we're at the point where skipping generations of our favorite products doesn't make us feel like we're falling behind.

Just a few thoughts on keeping the passion affordable. Now, who's got a lightly used Leica S they'd like to sell me at half the going new price? I might want to take a look at that...
Posted by Kirk, Photographer/Writer at 16:16 25 comments: