Totally off the topic of photography but right on target for Kirk.

As many of you know my kid, Ben, went off to college last Fall. He got out of Texas. He got out of the Southwest. He went all the way to Saratoga Springs, NY to attend Skidmore College. He chose the school, visited on his own and made the final decision. Even though it is 1849 miles from Austin we were very pleased with his decision. It's a rigorous school and very selective. And Saratoga Springs is drop dead beautiful.

So, I was waiting for Belinda to meet me at the Blanton Museum after my swim practice this afternoon and I got a text. It was from Ben. He made the Dean's List for last semester. It was his freshman, first semester.

I am very proud of Ben. 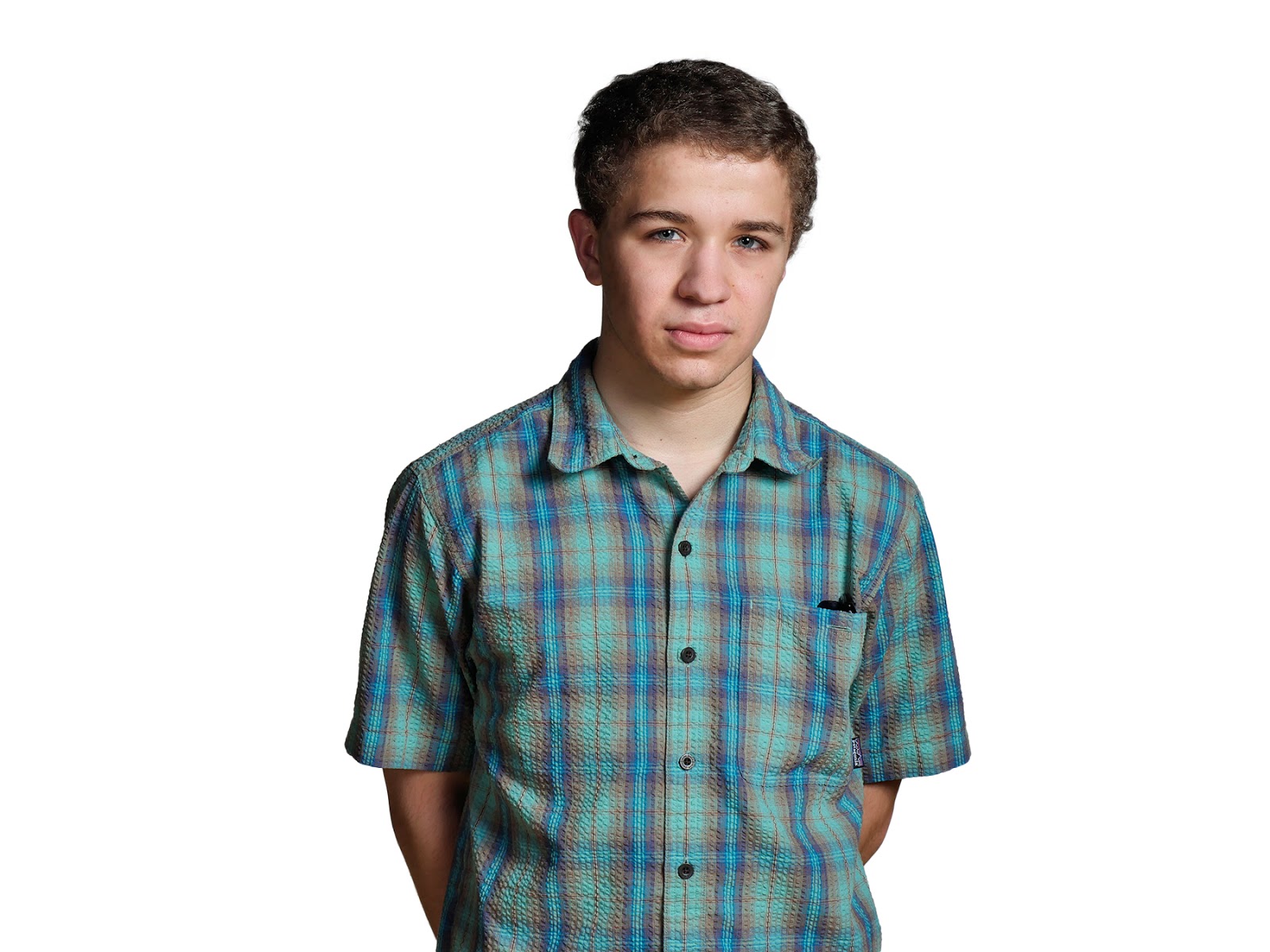 Posted by Kirk, Photographer/Writer at 15:45 21 comments:

The David Bowie Project. Another shoot at another theater with another production company. Intro. 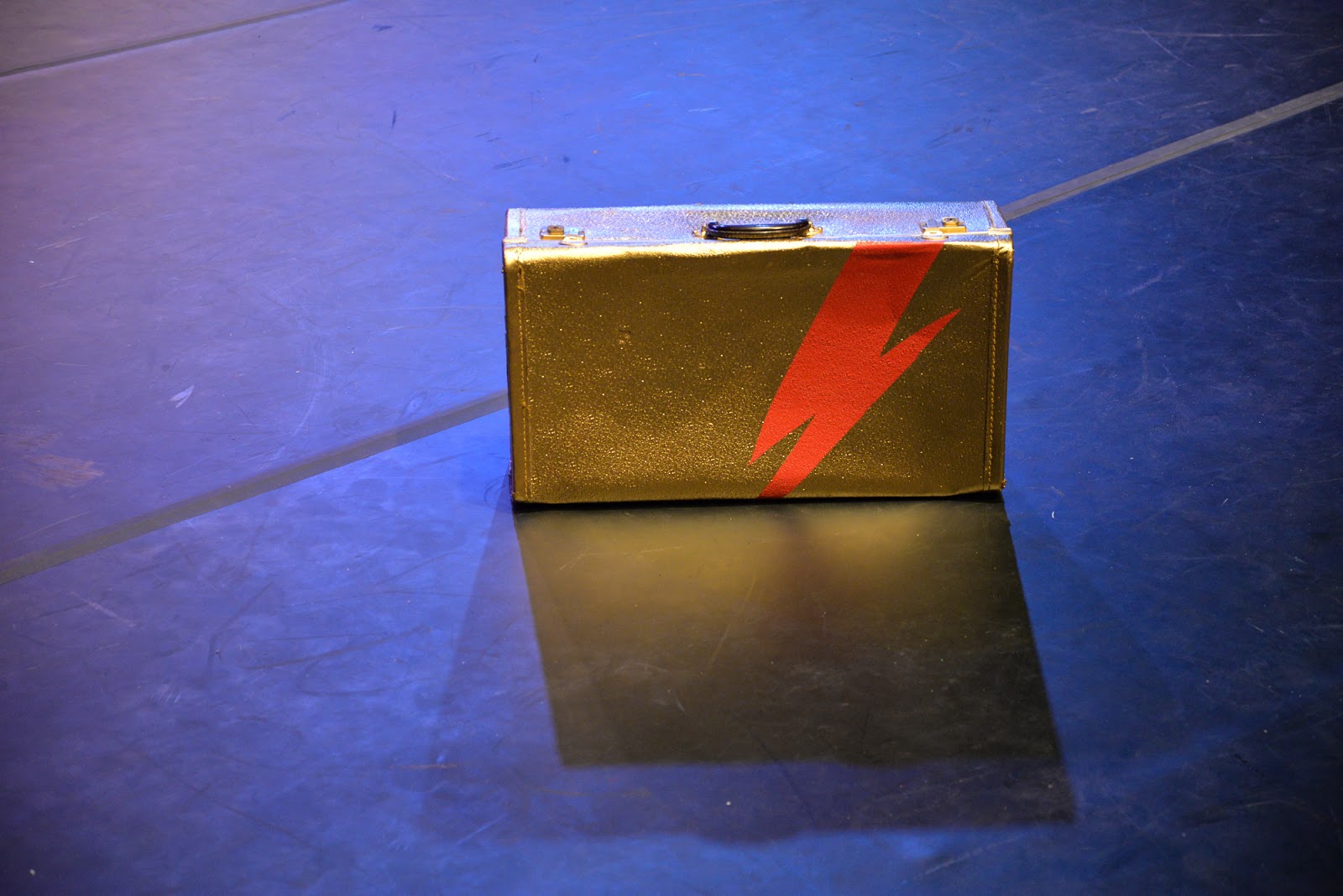 This post isn't really a full fledged post. It's a demi-post written while waiting the files to be ingested into the gaping maw of Lightroom. When we last convened I was just finishing up fine tuning some files for Zach Theatre's production of, "Peter and the Starcatchers." I put 900 images on a sixteen gb stick and delivered them to the marketing folks. We're having a love fest over on Facebook over a small sampling of the images. The pirate is trending well....

So, I finished up the post production on the Zach project and put the cameras back on the chargers. Backed up the images across a couple of hard drives and then wiped the big, fast cards so I could use them later that day. The rest of the afternoon was spent doing droll stuff. I bid on a lifestyle project for a big resort project that's going up down on the Texas coast. The agency had a wish list a mile long and budget we could measure with a short ruler. I sent along a bid with endless detail (I used to shoot advertising for a whole series of resort properties in the Caribbean and Mexico...) of stuff they had overlooked or didn't know about and I thought that I'd pretty much put myself out of the running. Sometimes it's better to decline a job then to stick your foot into a tar pit that just sucks you in and (temporarily) kills your business. My estimate was three times their initial "suggestion."

A few hours later I heard back and, golly, I'm still in the running but the agency has gone back to the drawing board to figure out just what we might be able to do within their budget. It's one thing to want to drive a Bentley but it a whole other thing to actually pay for one....

I also did a multi-page estimate for a very cutting edge technology company. Many layers of detail. We'll need to shoot so many angles and we'll need to do it with models and without. Then there's the retouching. And the clipping paths. And the logo replacements (same model chassis with different guts).  There was a lot of typing on my part. I hope it all makes sense to our prospective client.

This kind of backend work is tedious and has to be done correctly because the detail in the bids and estimates becomes part of the final agreement, which is binding. I'd hate to promise something we can't deliver or overlook the number of hours that would really be required to make a process work well in imaging. There will be some give and take about the final numbers but that's to be expected.
Once we have everything nailed down we'll tender an agreement which is our basic contract. When I read a lot blogs about the business of photography few of them talk about contracts and agreements in writing but it really forms the backbone of the process and clients do take them very seriously. Who will get what? What will it all cost? How are the rights licensed? What if something doesn't match up? All vital questions in business.

Anyway, it was my turn to make dinner and I knew I needed to be downtown for a new performance rehearsal at 7:30. Hello Jason's Deli. A half mufuletta to go. We ate our sandwich and shared news of the day. The boy has not frozen in the arctic wastelands of the northeast; he has survived the blizzard of 2015. 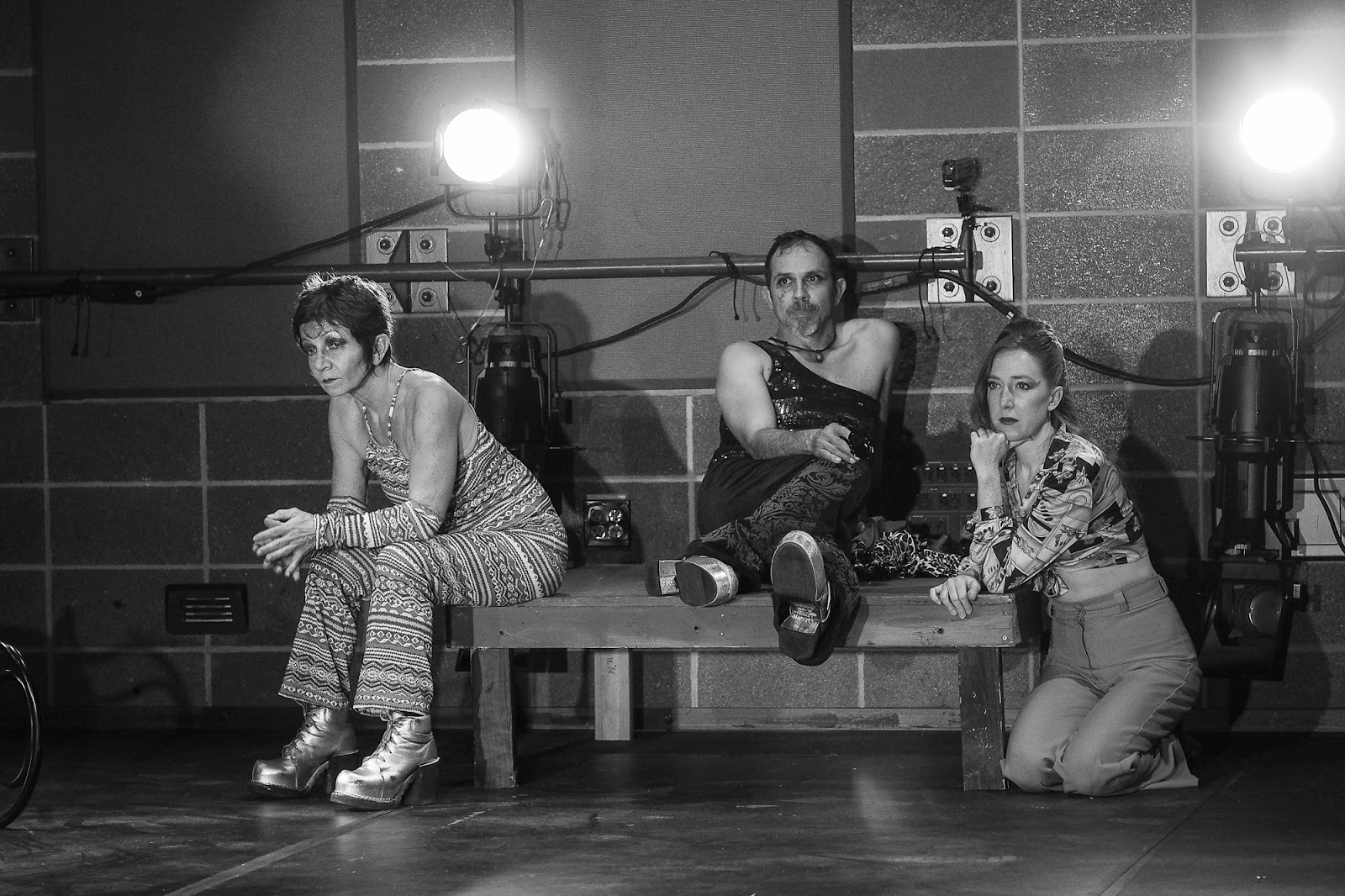 The performance was at the Long Center here in Austin. The production company is headed by Andrea Ariel and the project is called, The David Bowie Project. Andrea calls this kind of integration of music, drama and dance: Sound Painting.  I call it structural improvisation.

I'm still processing images from last night and I'll share them later but I wanted to explore on thing that came to me in a moment of satori last night. An epiphany.

But first some samples: 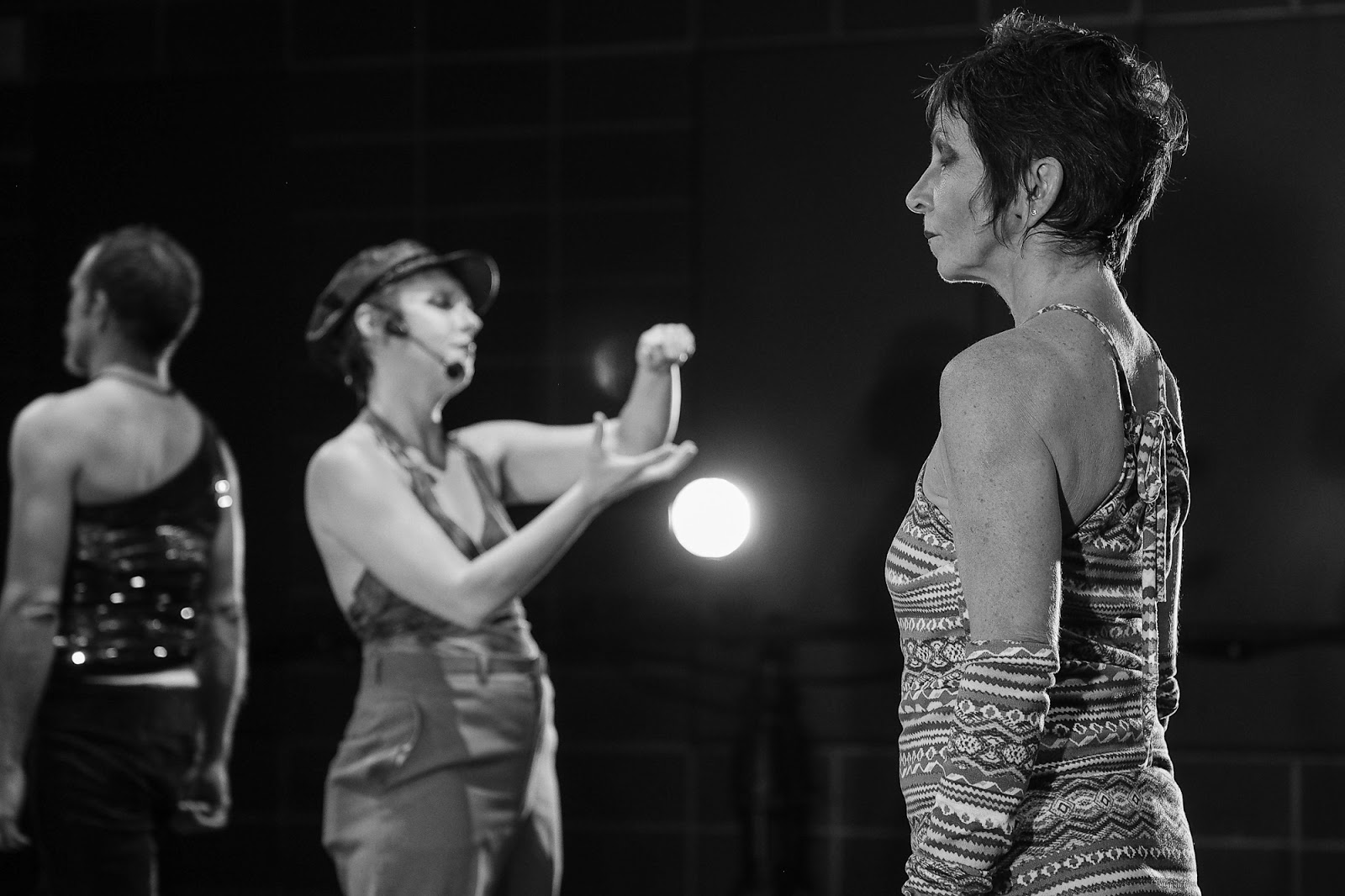 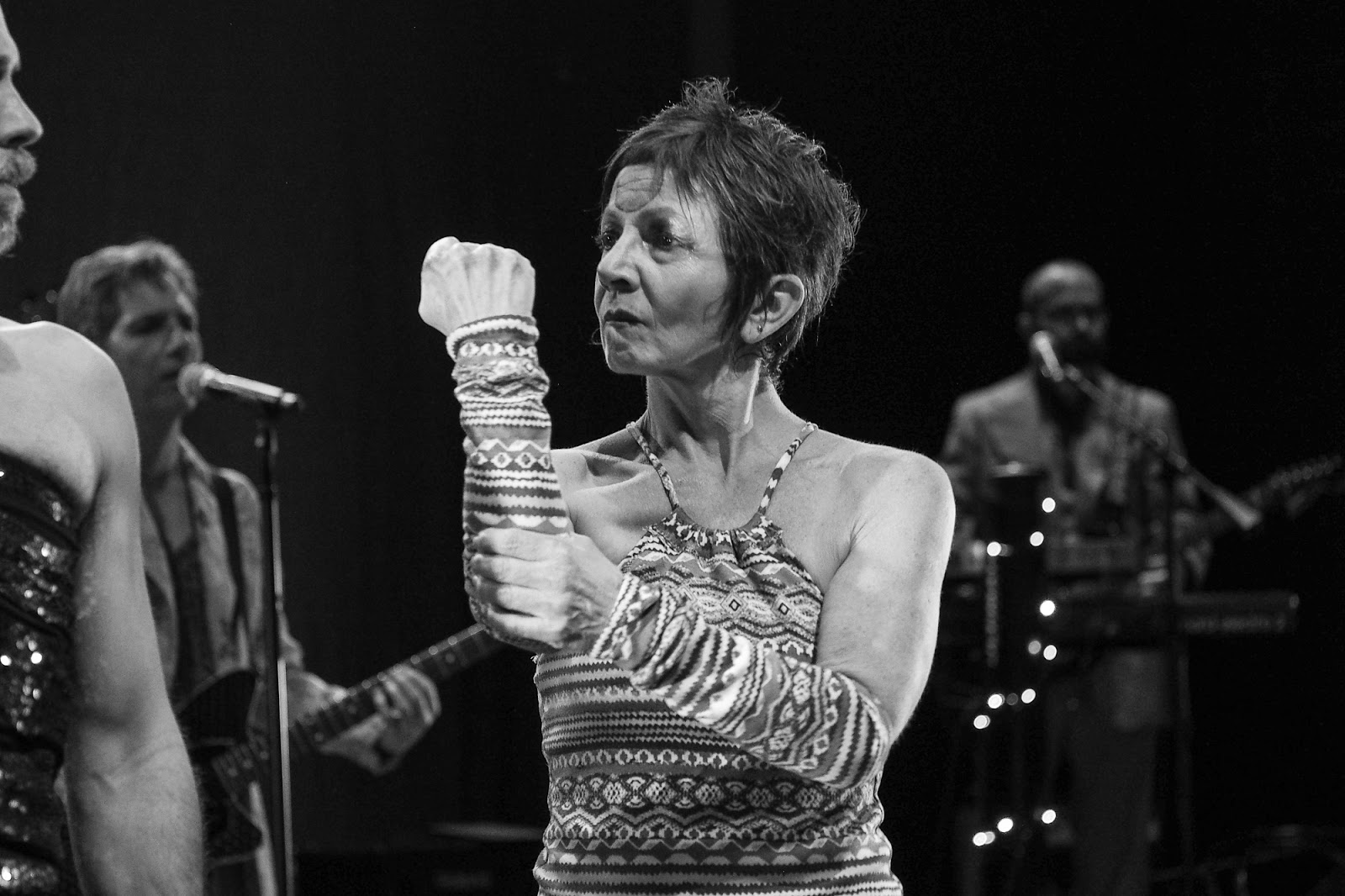 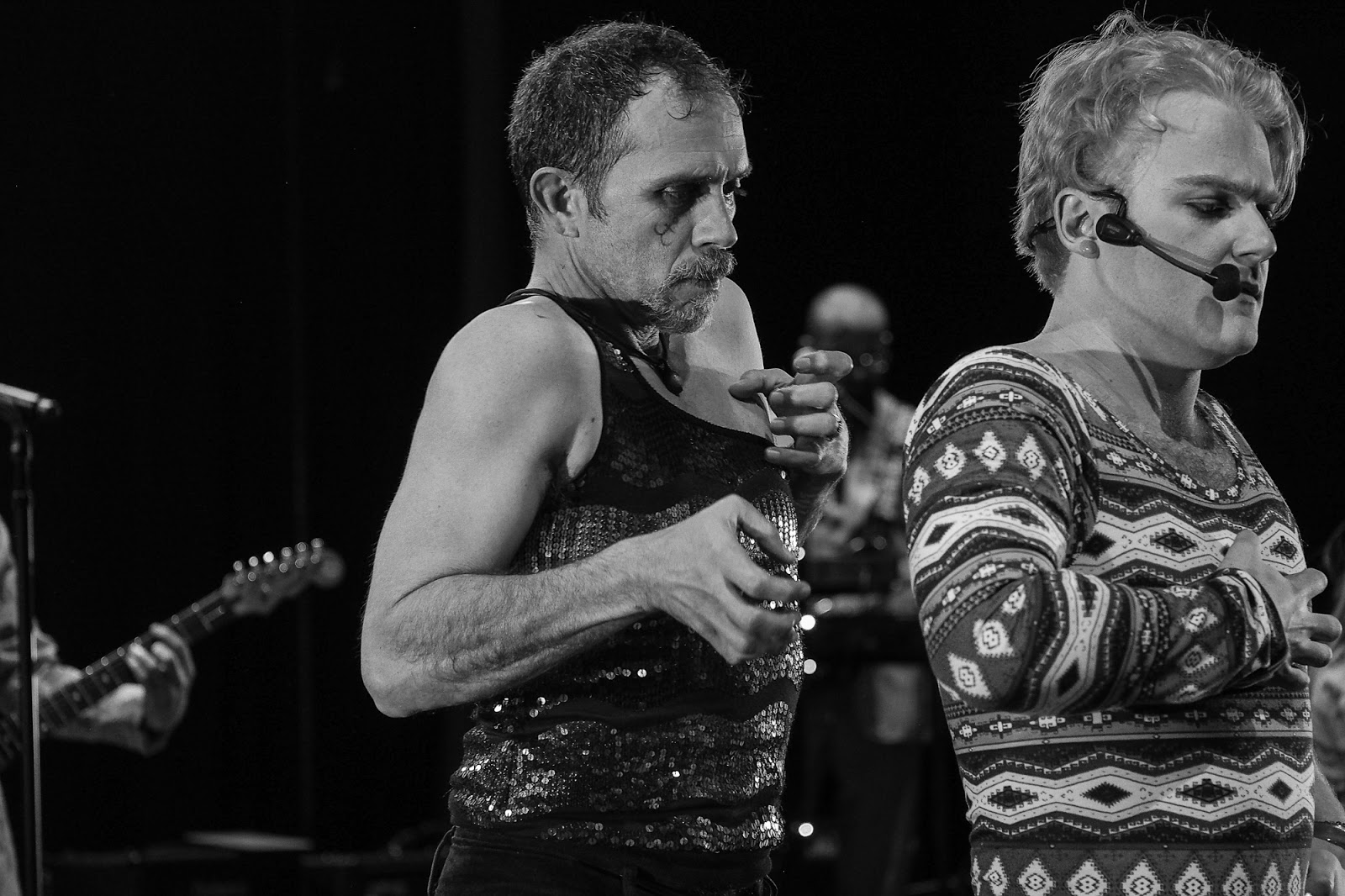 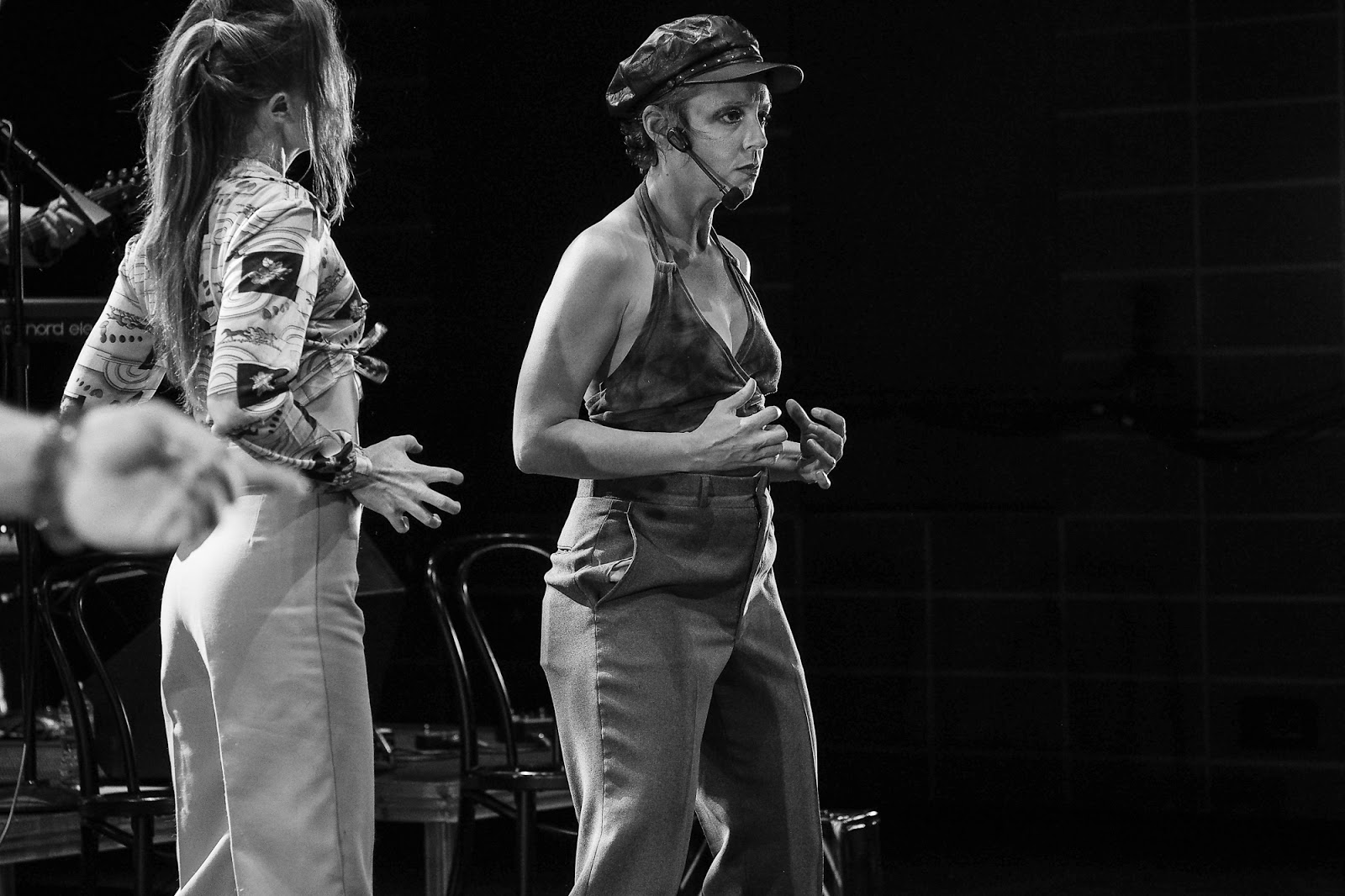 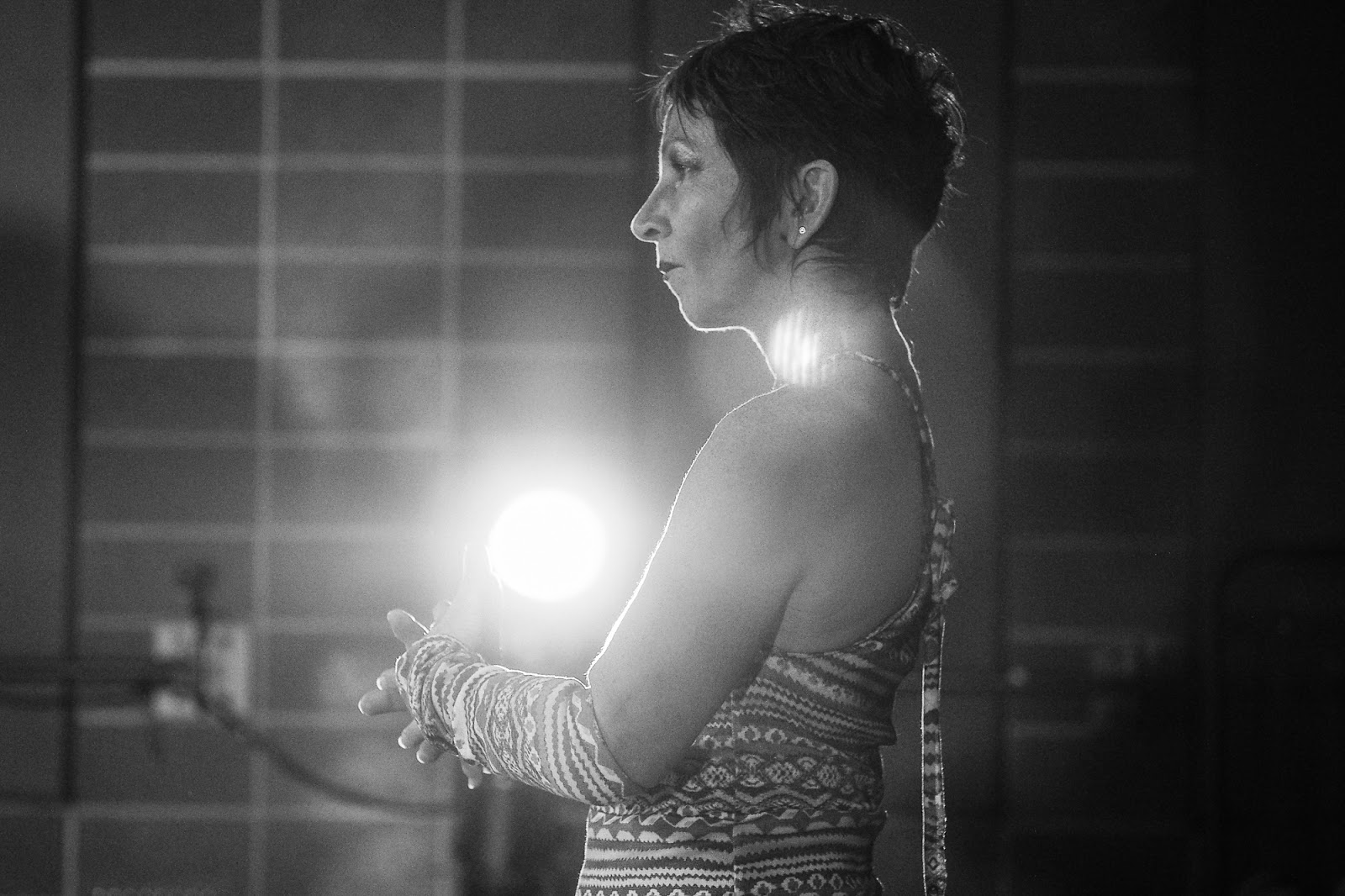 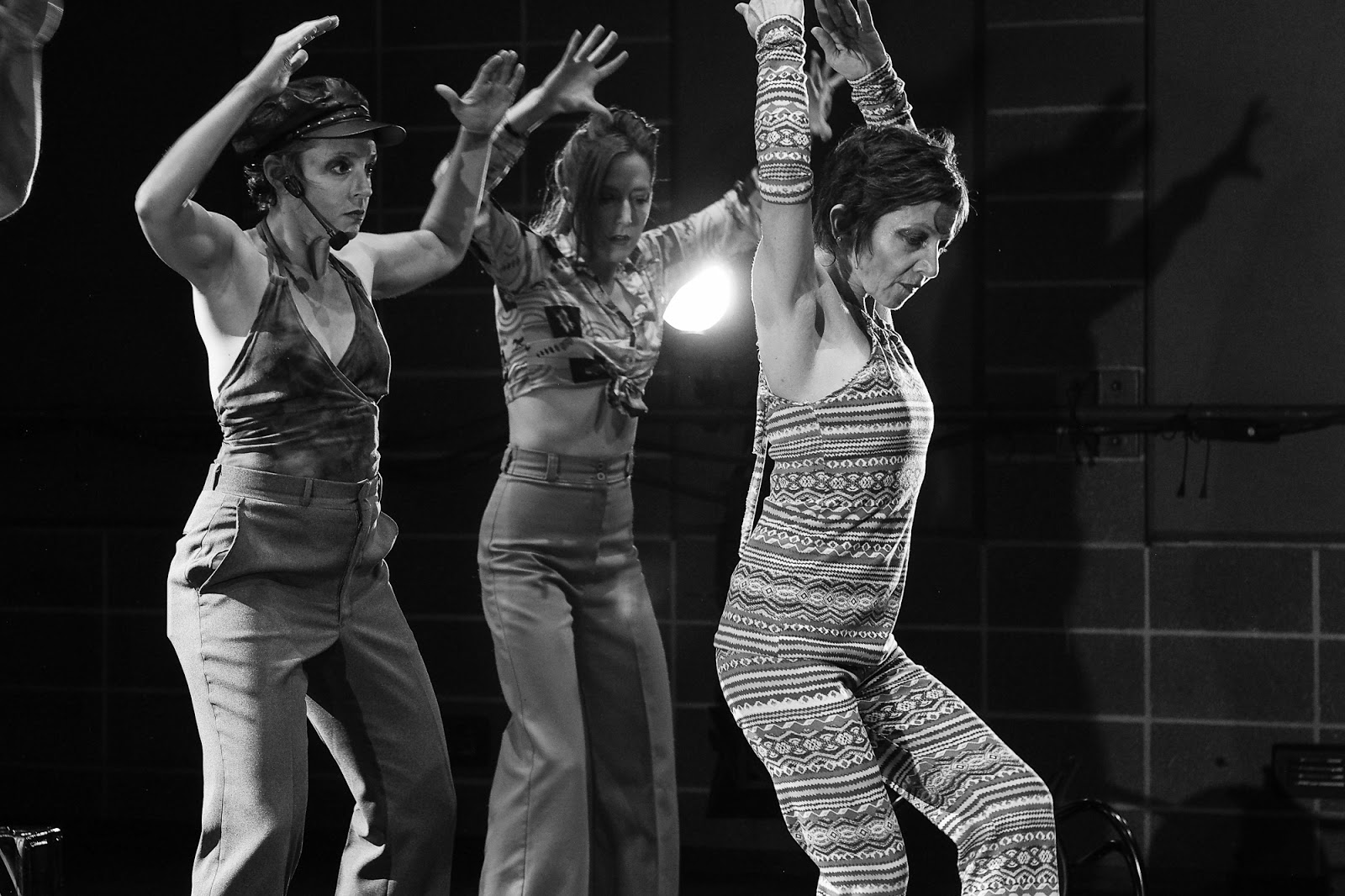 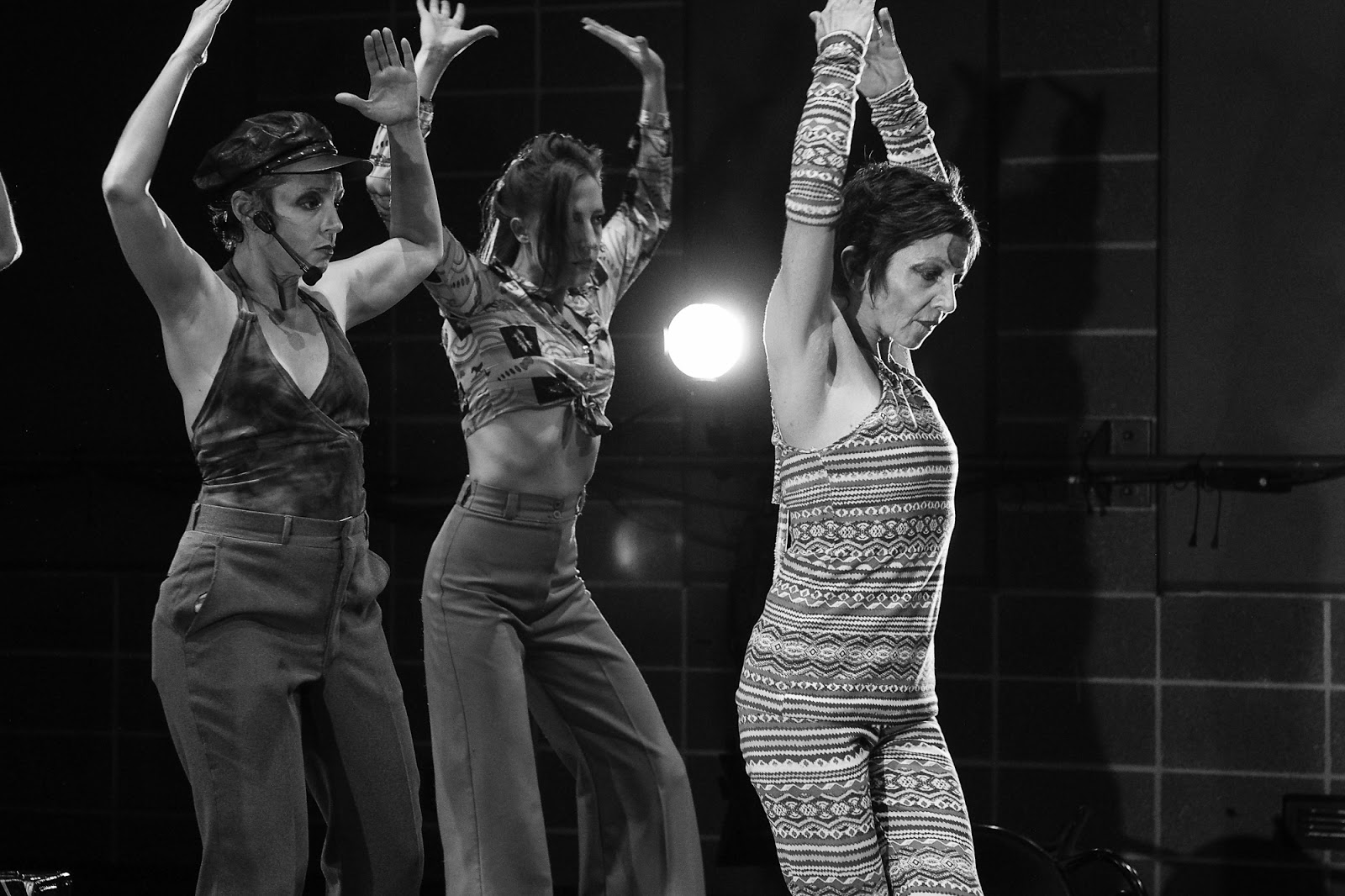 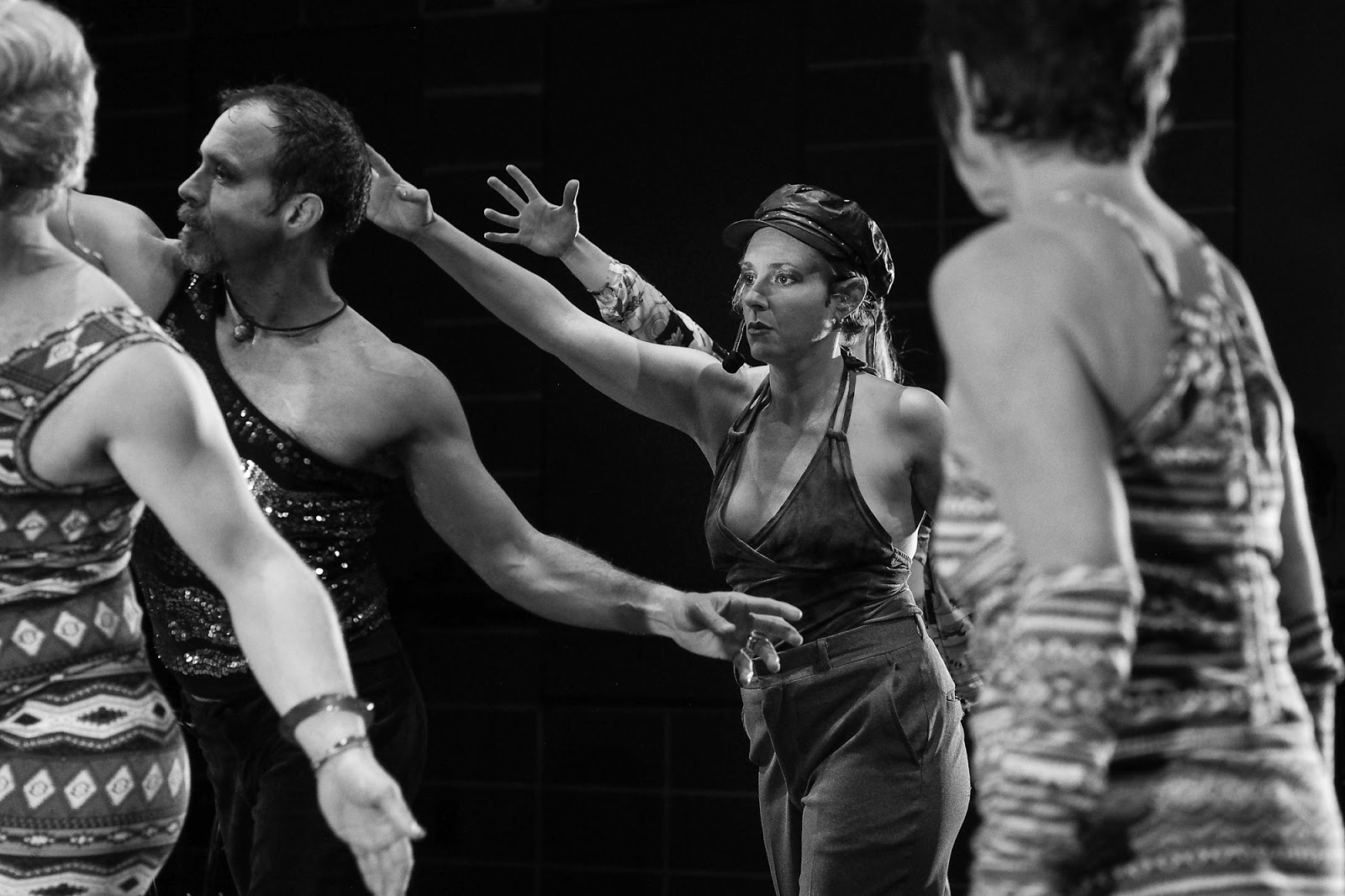 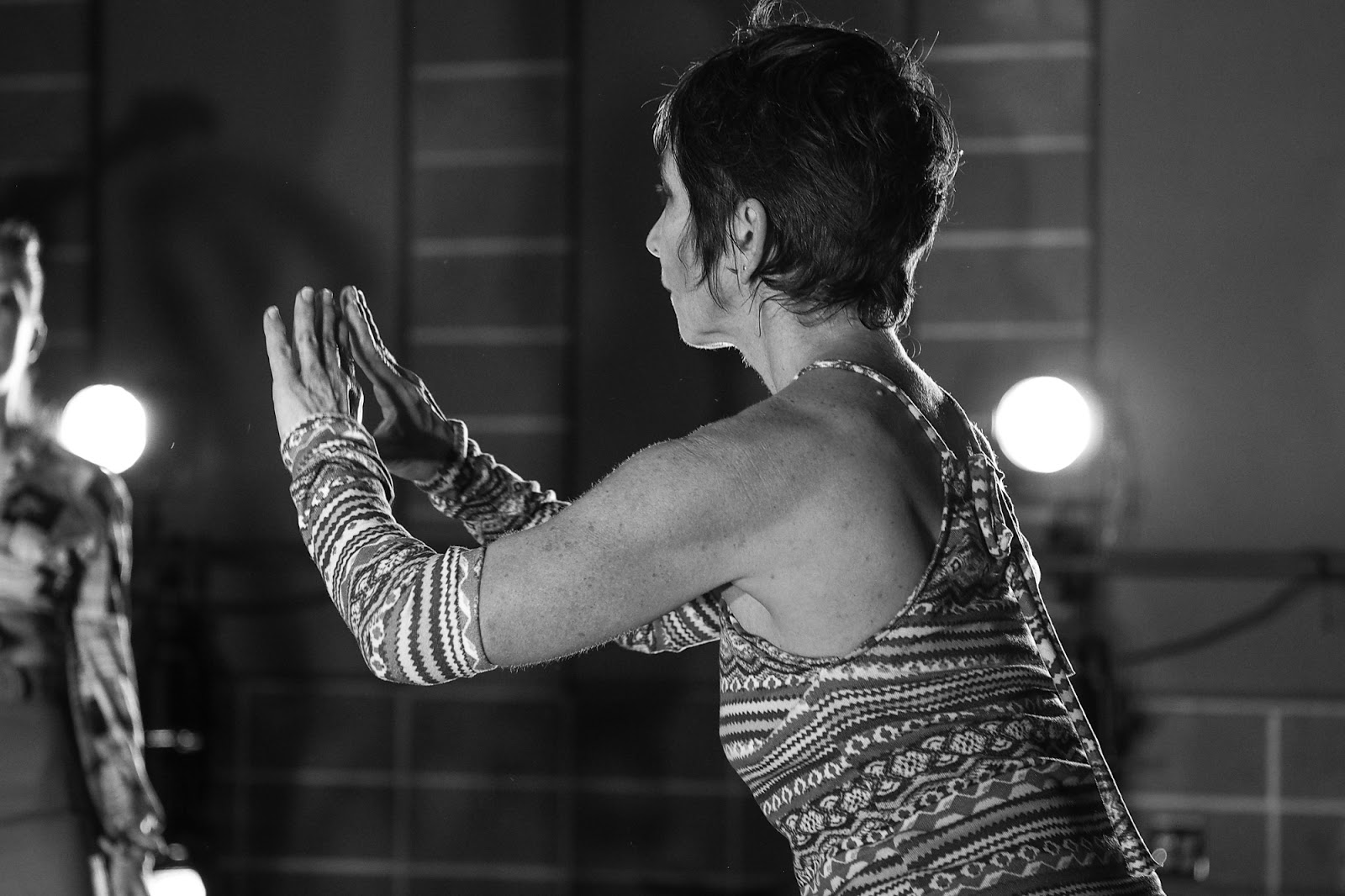 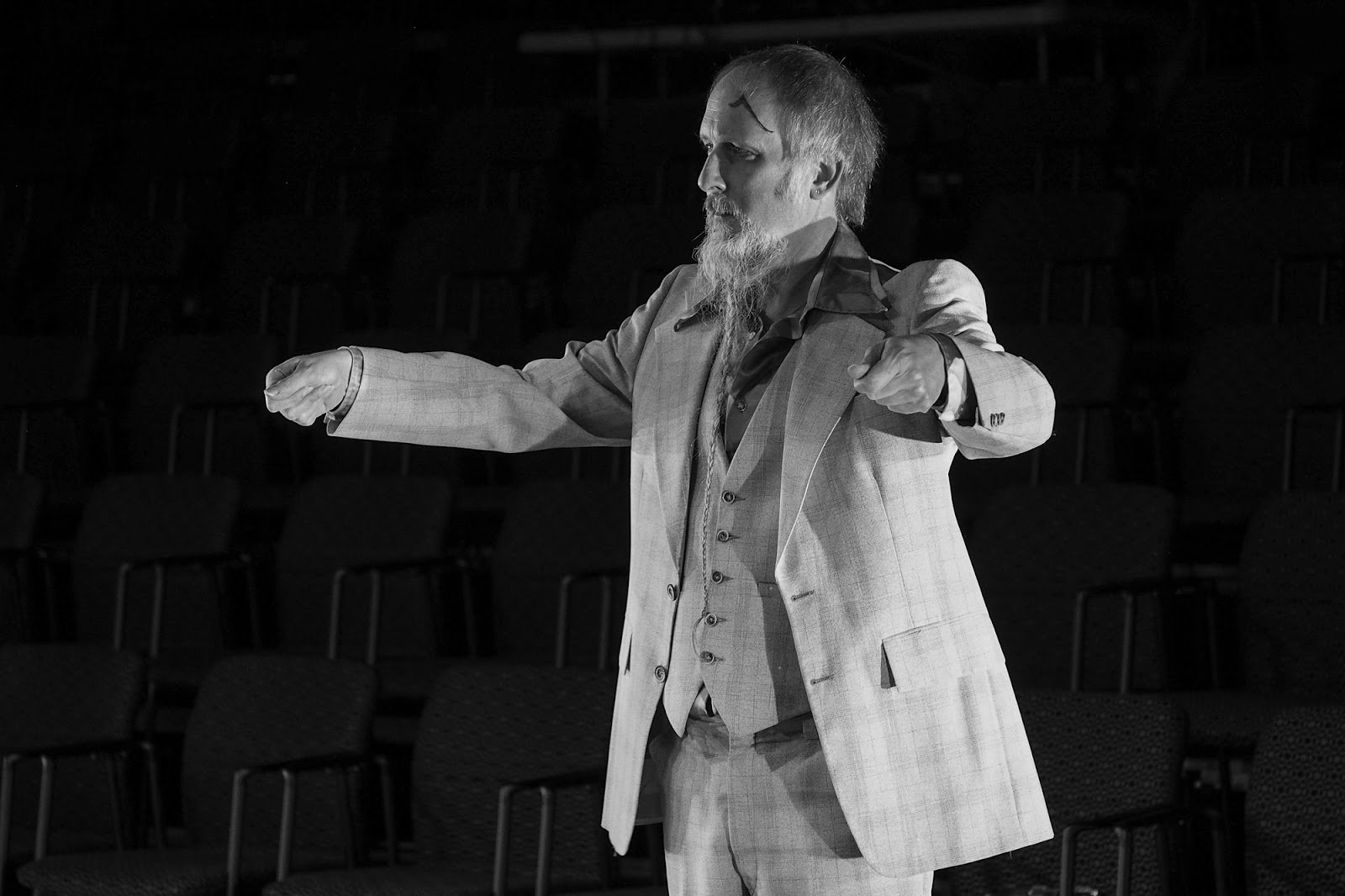 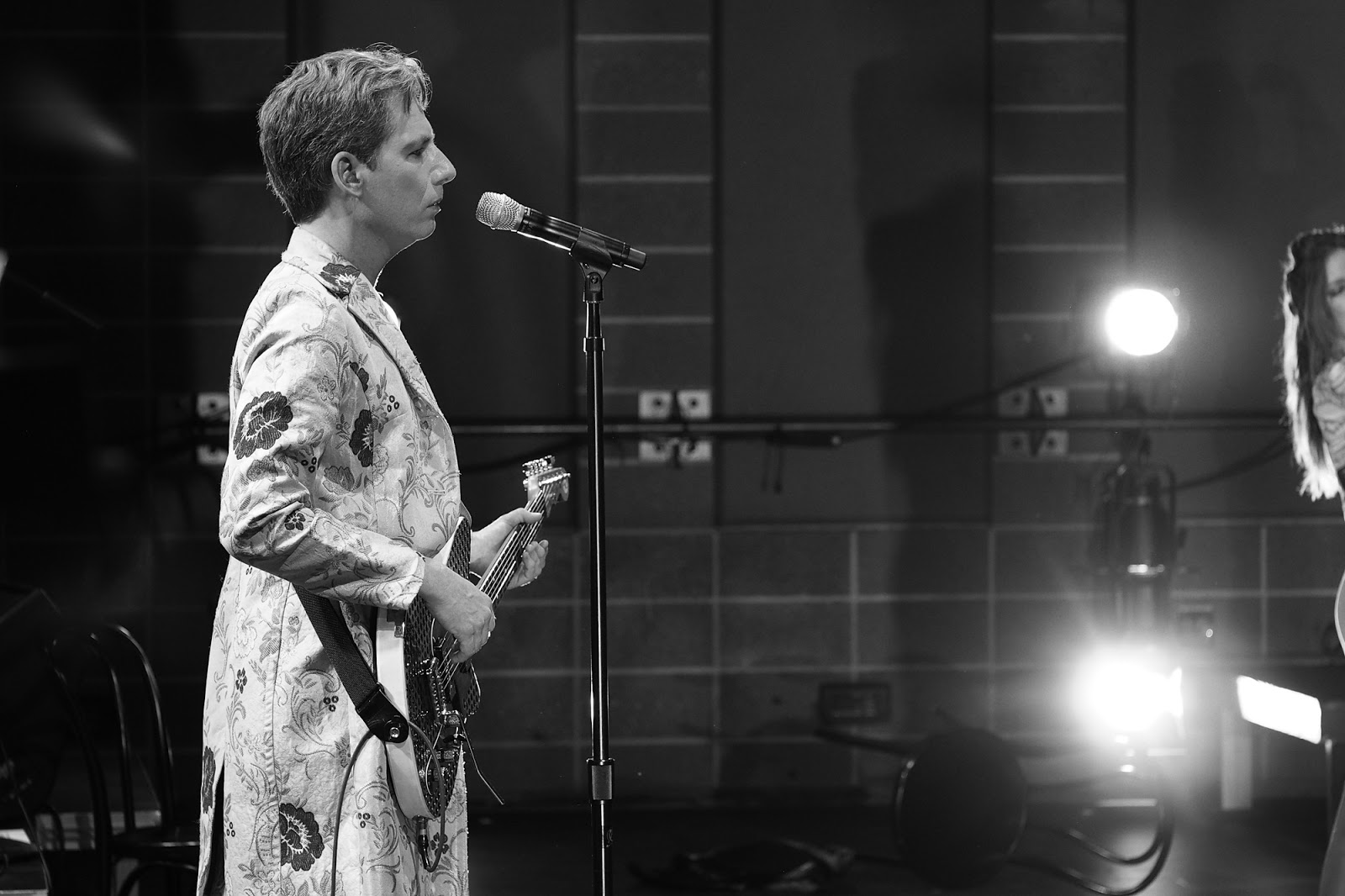 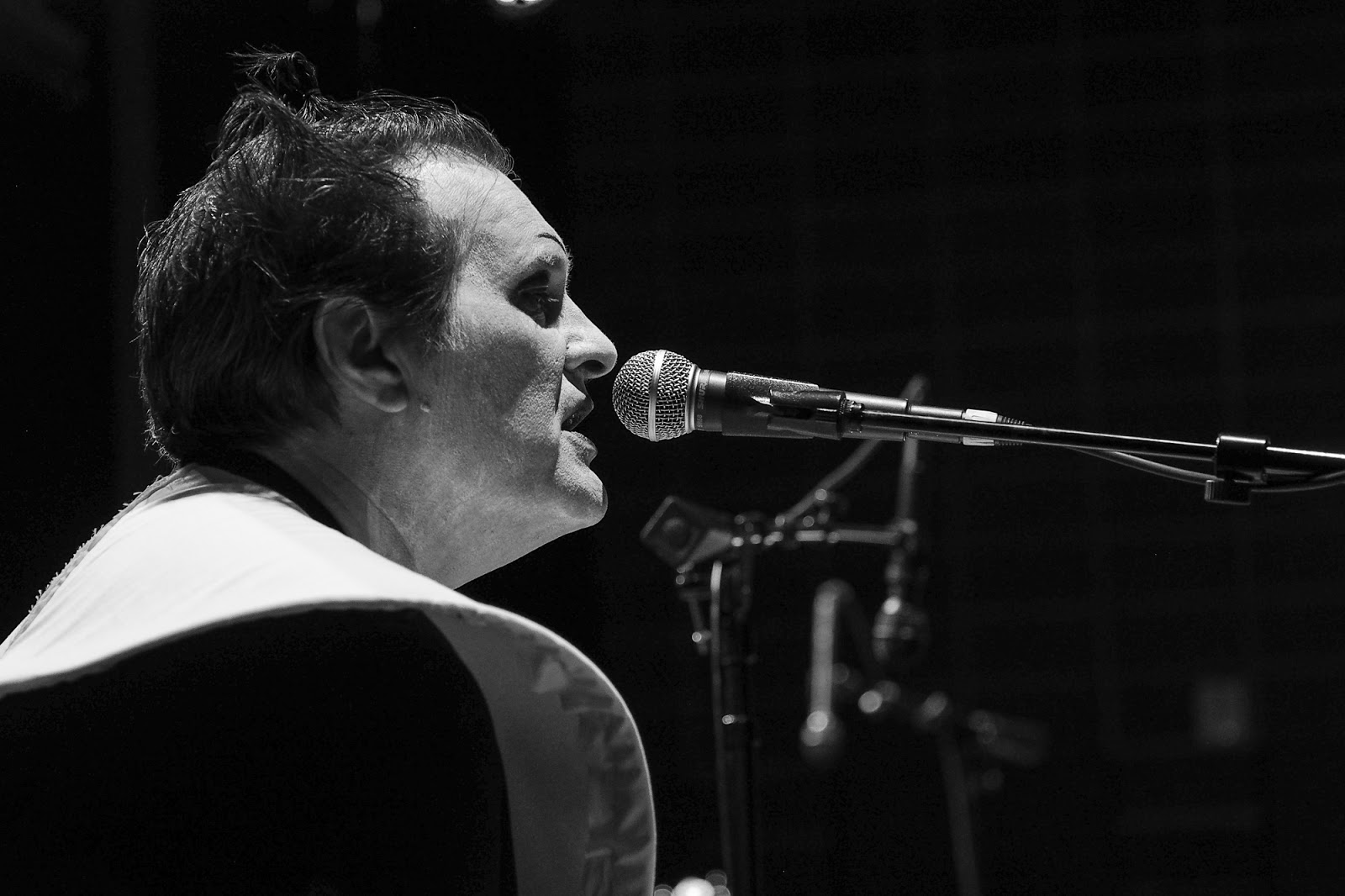 And now for my personal epiphany: I was shooting with the Nikon stuff and they were doing their basic camera stuff very well. They are like guys in suits who can tell you what escrow really means and will explain securitization to you in detail. The color is what the color is and everything is acceptably sharp and detailed. So if you are a linear thinker you might be able to stop right there and endless iterate in a linear fashion.

But then I picked up my Olympus EM-5. For some reason or another the camera was set up to shoot Jpegs in monotone. Black and white. Grayscale. I went to move it into a color profile but I stopped myself and decided to shoot "just a few" images in black and white to see how it all looked. I shot and I liked. The image on the rear screen looked like a beautiful print from my heyday's with Tri-X.
I decided to throw caution to the wind and set the camera up to be exactly like the cameras and films of my past. I set the ISO to 400 and the filtration to green (a subset of monotone that emulates the effects of different color filters on panchromatic films). I boosted the contrast a little bit. I turned down the noise reduction a bit. And then I just shot with reckless abandon.

I was using the 60mm f2.8 Sigma DN Art lens as it was the only one I'd brought along. Just look at the rich tones and also go back and look at frame after frame with powerful stage lights directly in the frames! Look at the rich, noise-free blacks! But mostly, look at those luscious tones!

In some situations the bigger cameras will give one a technically better file but I don't always want that. Sometimes I want a file that looks like art all on it's own.

The amazing thing to me is that most of these (all of them?) were shot with the lens wide freakin' open. The shutter speed vacillated in the realm of 1/40th to 1/80th of second with me leaning on timing and the camera's remarkable I.S. performance.

Once I got engaged in shooting with the Olympus and the monotone setting I was so hooked that the other cameras got tossed onto a theater seat and ignored for the rest of the evening. Oh sure, I had enough color coverage to keep the client happy but this stuff made me happy. It make may them happy to----afterall, they are artists too.

Many questioned whether I would just abandon the micro four thirds cameras in favor of the full frame Nikons. I've been quiet about it until now but I have to say that there are certainly times for technically perfect images with outrageous amounts of resolution and detail but in my life there are at least as many times when I want images to look not perfect but really evocative and lush.

My recent Nikon purchase, the D810 is $3300. The last Olympus EM-5 I bought (last Fall) with a battery grip was $395. For work like the stuff above (which may not be your personal cup of tea) I'll take the Olympus EM-5 nearly every time. What a great and transparent camera!

What's my commitment? Well, I've got four of them in the gear cabinet and I've got my eye out for more as the prices continue to drop. What a bargain. And the Sigma 60mm lens? Well, look at the Samples!

Just a few thoughts while watching some avant-garde dance performance. Your mile will surely vary (YMWSV).

Posted by Kirk, Photographer/Writer at 11:30 12 comments: