more notes on the Olympus EM5-2. Spring day in Austin. 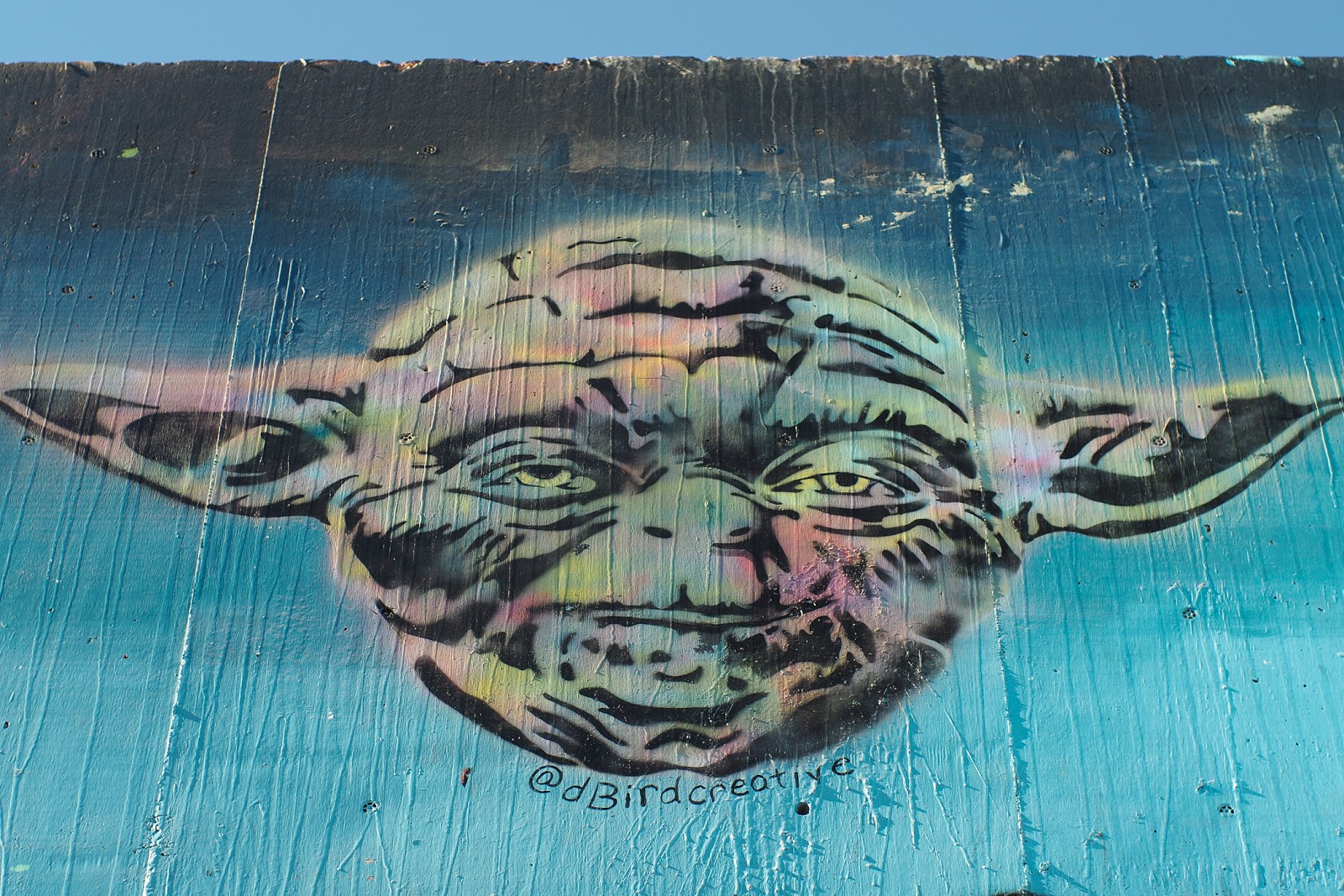 I've been shooting with the EM5-2 for a little bit more than a week but it's been a week dense with projects and so far few of the projects have included the new camera. I have an advantage with the EM5-2 in that it's an upgrade of a camera (the original OMD EM5) that I have four of and have used extensively in corporate event shoots and personal work. That means that most of my learning curve with the new model includes learning where in the menu the controls for new features are. I also have to get used to the new button placement.

Since I bought the camera with the intention of pressing it into service as a handheld video camera, thinking to take advantage of both the five axis image stabilization and the focus peaking I have outfitted it for that. I bought both halves of the battery grip, partly because I will welcome double the shooting time before battery changes but mostly because I want the headphone jack that allows me to monitor audio. That headphone jack is on the part of the battery grip that attaches directly to the camera. While the add-ons grow the package it's still relatively small and very easy to work with.

I hit my first learning glitch over the new feature; focus peaking. I went into the menu, set it up the way I wanted it, turned it on and then exited the menu. To my consternation, with a manual lens mounted I could not get the focus peaking to appear. Thankfully, my friend, Frank, showed up to help me out. A lifeguard in the camera set-up pool. He let me know that I needed to assign the focus peaking to one of the dozens of function buttons that festoon the exterior of the camera (there are really only three or so but I'm finding on re-reading the owner's manual that almost any button can be reconfigured...

I replaced the "magnify" feature I'd set at function 2 with focus peaking. I figure it's all part of the same intention----getting sharp focus from manual lenses. That worked perfectly and for a while I was very happy.

It would seem like a more balanced report if I could list out other things that interfere with my enjoyment of the camera but so far I haven't stumbled over any. Focus peaking works a little bit differently on this camera than it does on my Panasonic GH4. When the focus peaking is engaged the camera actually darkens the view screen a bit so there's more contrast between the peaking artifacts and the scene. It works well and helps make the feature even more fine tunable. I do find it a bit jarring to have the focus peaking indications vanish when the shutter button is pushed half way down, but at the same time that push on the button also restores the preview to its normal state which assures me that we got the exposure nailed down correctly.

I spent an hour this morning out shooting with the camera and one of my all time favorite lenses from the original, film, half frame Pen. It's the 40mm f1.4 and it's a great optic once you are two stops down from wide open. Everything is sharp pretty much across the frame.  It's not terrible at f2.0 but everything except the middle third of the frame goes a bit low contrast, low sharpness to me when I use the lens wide open. Solution? Don't use the lens wide open.

Let's talk for a second about the improvements. The camera feels as though it is better made than its predecessor. More solid and weighty. The EVF is wonderful. Sharp and detailed and imbued with a fast refresh rate. It's one step closer to the holy grail of looking through a window. The shutter has a wonderful and very quiet action. I use cameras in many interior spaces and on many jobs. The ones in the theater or the ones where I shoot in conferences or in small meeting rooms are the ones that both make me cognizant and also appreciative of a low decibel, sonically well behaved shutter mechanism. That's something I like in the new camera.

I am enthusiastic about the banishing of the accessory port just above the finder window. Olympus accomplished this by giving me a dedicated microphone port and a real sync terminal. What it really means for me is that when I shoot video as I wanted to with this camera I am able to put the microphone into the hotshoe and connect it to the dedicated port. The older accessory took up the hot shot and required that I do something else with the microphone. Like parking it on a "cage" of adding a bracket to the camera.

Video. Let's talk about the new elephant in the room; video. Or more precisely the image quality of the video. I can already tell you that my test with the image stabilization have shown me that we're on the right track in using this camera for handheld video content creation. It's rock solid. I use the "mode 2" of I.S. because I don't really trust the digital IS in conjunction with the mechanical I.S. I think it can create artifacts in the video with more extreme camera moves.

But let's cut to the heart of the matter, we all wanted this camera to be as good with the image quality of video that the GH3 is. (We really want GH4 quality but most of us are more than happy to settle for GH3 1080p quality if you dig right down). Is it? Andrew Reid at EOShd.com says No Way! And the discussion about it rages on over twenty or so pages at his well read site. I'll have to say that even at the All-I setting which gets us 77 megabits of data per second the codec isn't as sharp as the one from the Panasonic at its 50mbs setting. But the All-I setting does a good job of preventing motion issues and files that get blocky with a combination of low light and fast movement.

I'll say that the video at the best levels, using good lenses is right up with the Canon 5D mk3 (un-hacked) or the Nikon D750--810 at their in camera settings. The big issue with all of these cameras versus the GH4 or the Sony A7 is that the files don't appear as crisp and detailed. Is it a deal breaker? Not for me. I'll use a GH4 to do locked down interview shots but when motion is involved everything is a trade off and I'm firmly of the belief that the Olympus gets the best part of the deal with a hand-held camera. Good video focus with the right lenses, great stabilization, good color and adequate sharpness.

If you are relatively new to video you'll find that lots of things that critics bitch about are either as a result of comparisons between $1,000 do everything cameras and $25,000 dedicated video cameras or they are the result of trying to shoot distant objects and landscapes with an absolutely limited number of overall pixels. The 2K frame comes in right around 2,000,000 pixels which isn't a lot to spread around a wide frame with lots of small details. All of these cameras are much better at the kind of stuff I also like to shoot much better. In short, closer shots of people, waist up interviews and tight detail shots almost always look great. Big, chunky graphic frames are the forté of low resolution cameras and this is no different with video cameras.

I have several projects coming up on which shooting video with the Olympus camera will be easy to do alongside whatever other camera I choose to use. At that point I should have a lot more to say about how the camera handles day to day video shooting but, for right now, I am guardedly optimistic.

Shooting the graffiti wall with this camera is a piece of cake. Easy as can be. The focus indication through peaking was right on the money and the color and integrity of the Jpeg files was as peerless as I always remember it. It's an amazingly good camera in a nice system at a nice size and a decently low price point. Will it replace my Nikon D810? Nope, it will complement my big, heavy but amazingly detailed Nikon. They both work pretty darned well. Pictures follow. Click to see them big. 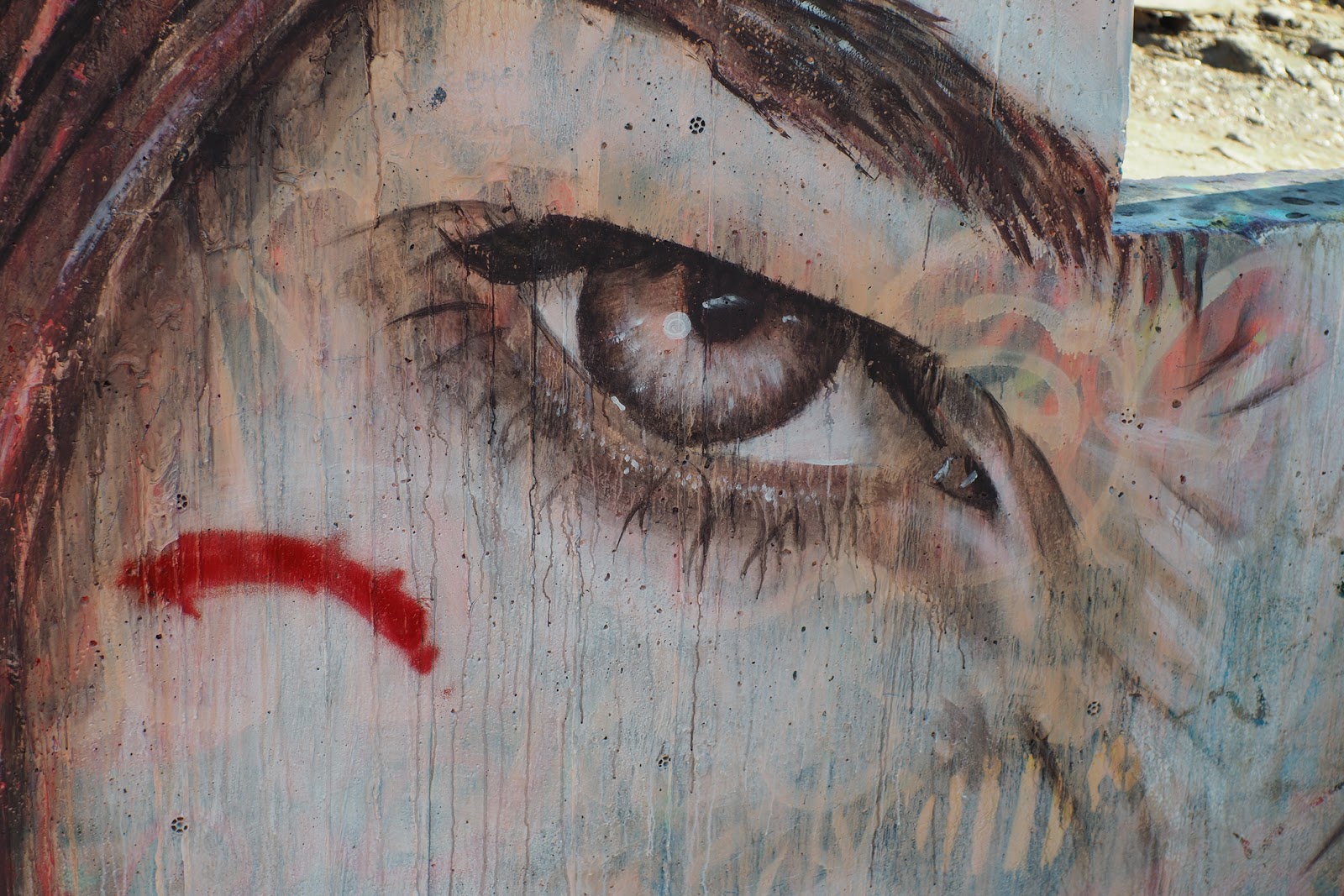 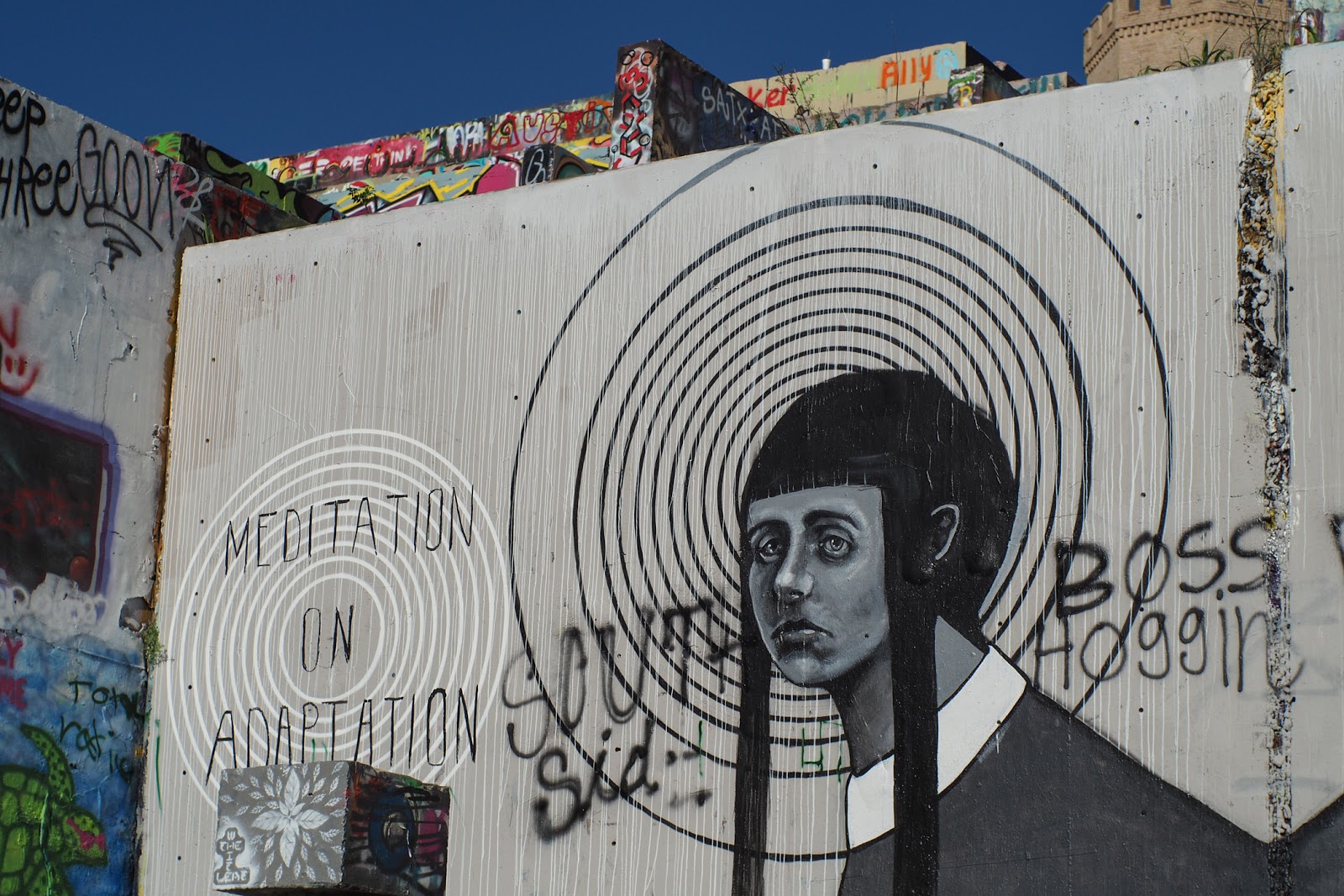 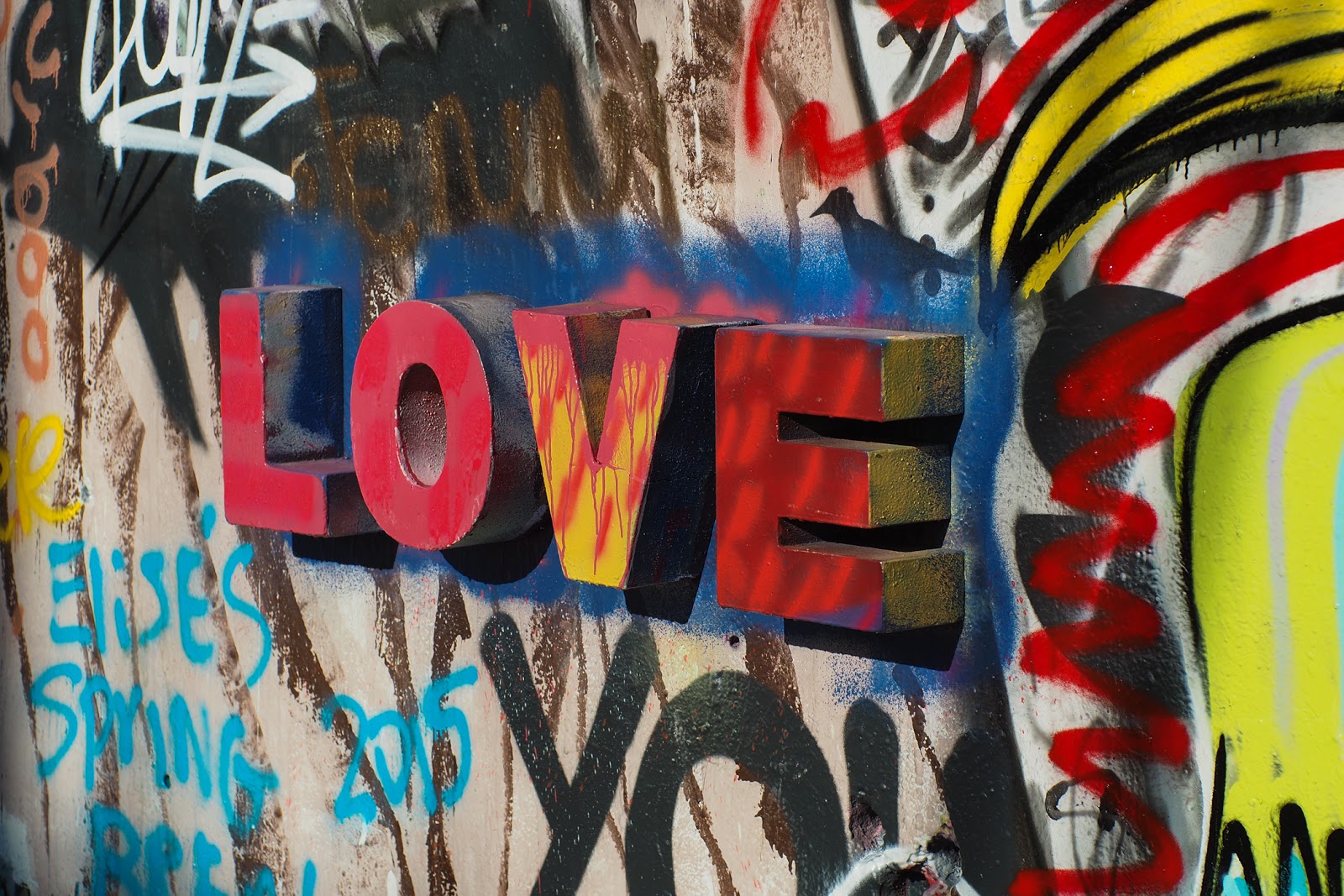 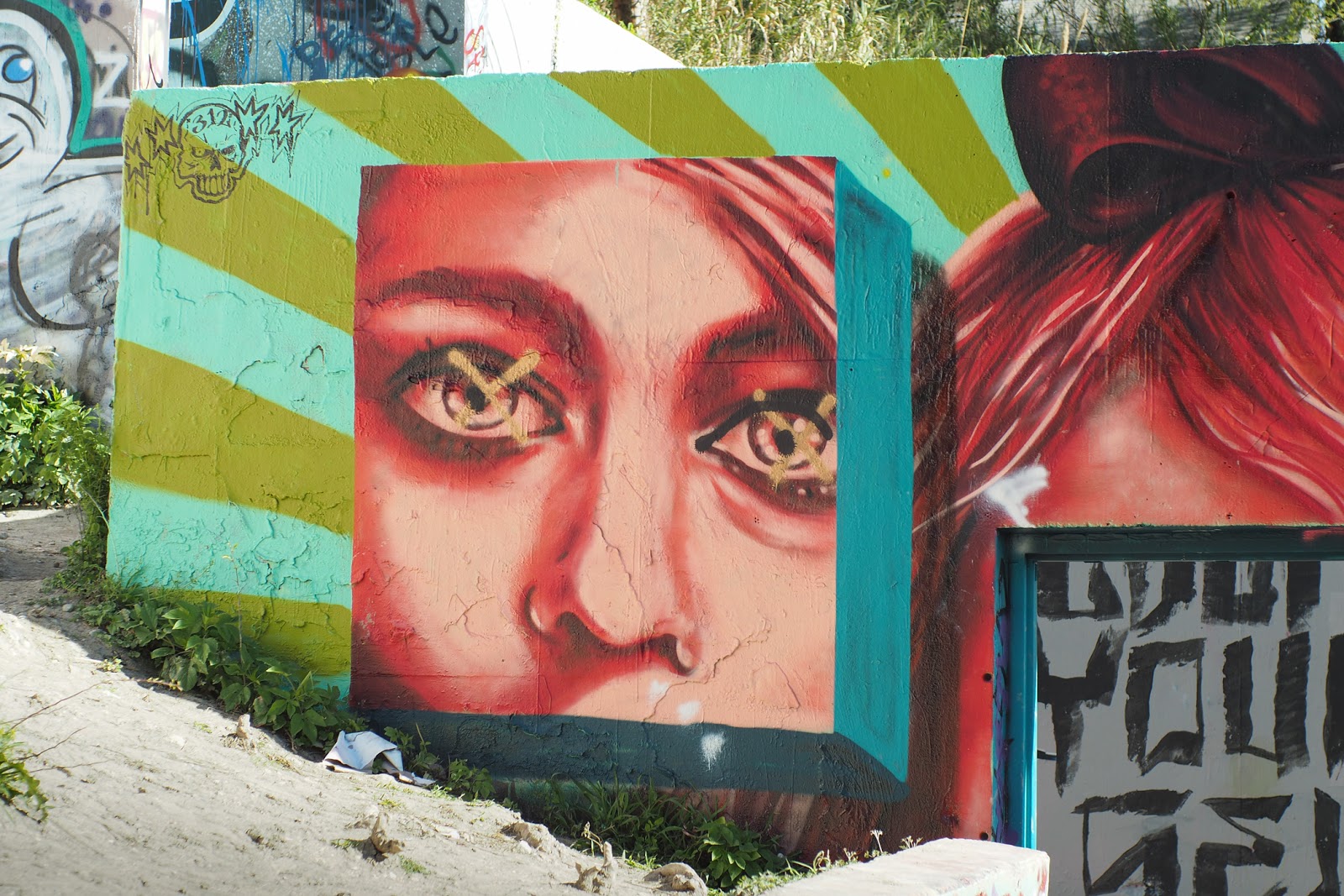 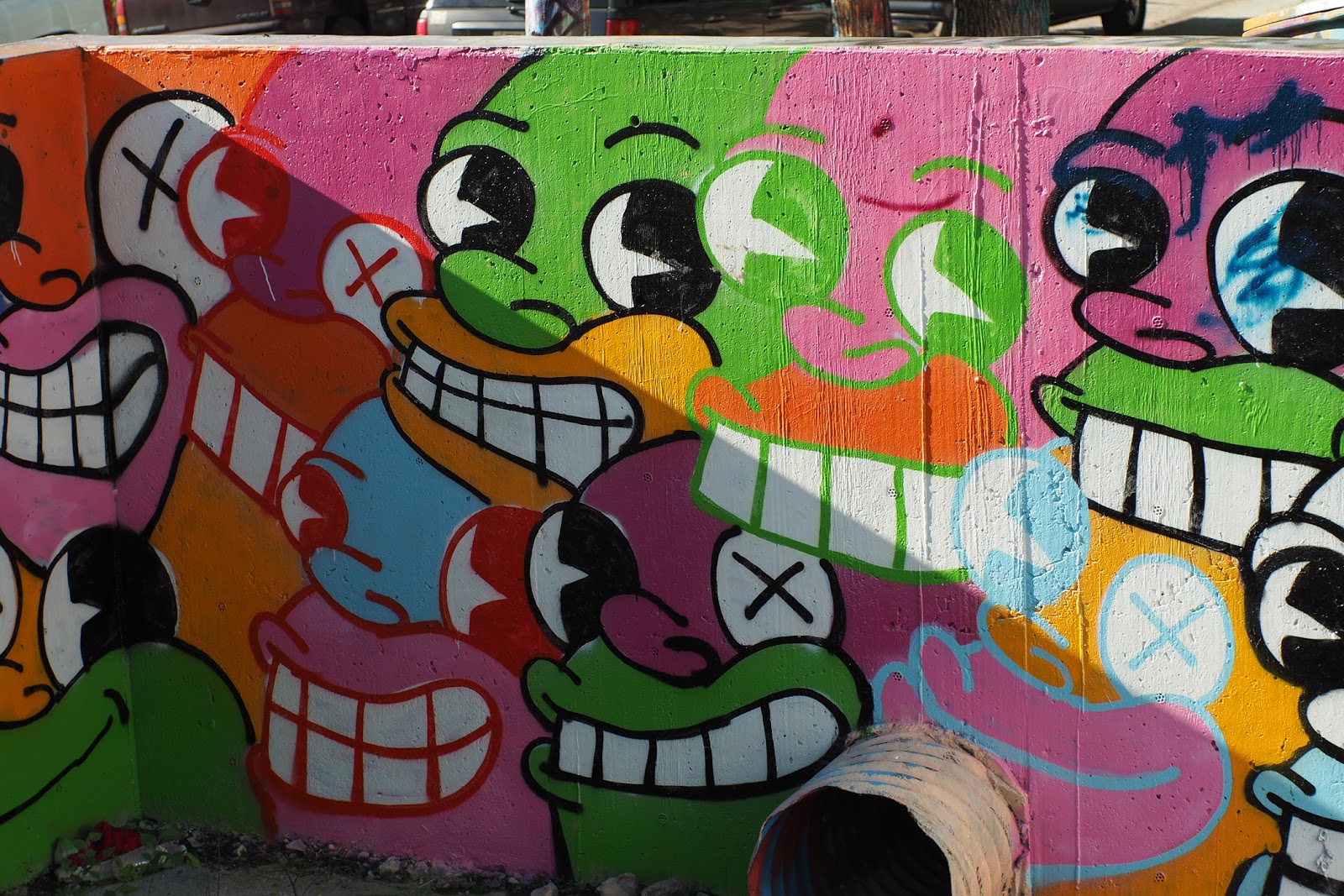 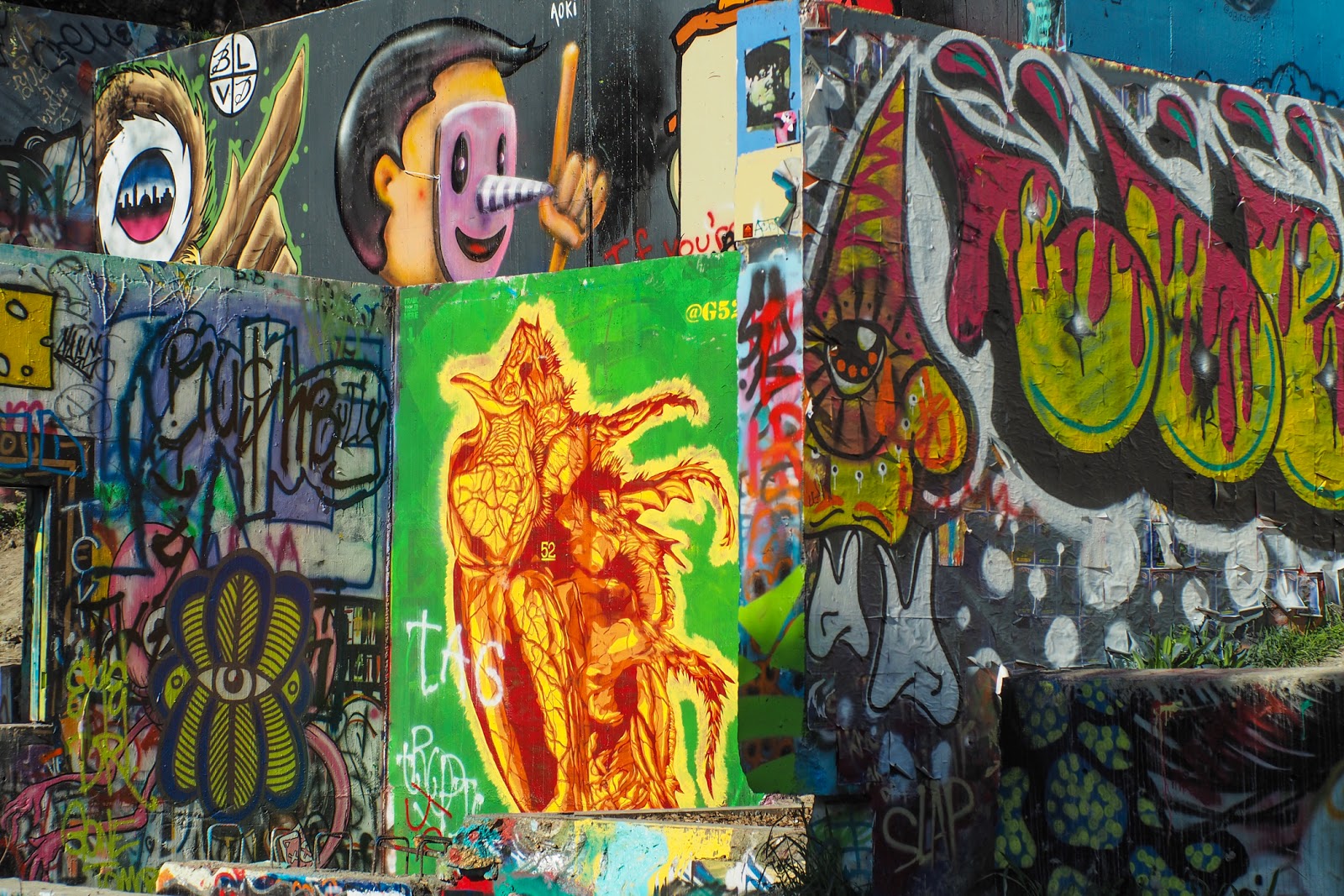 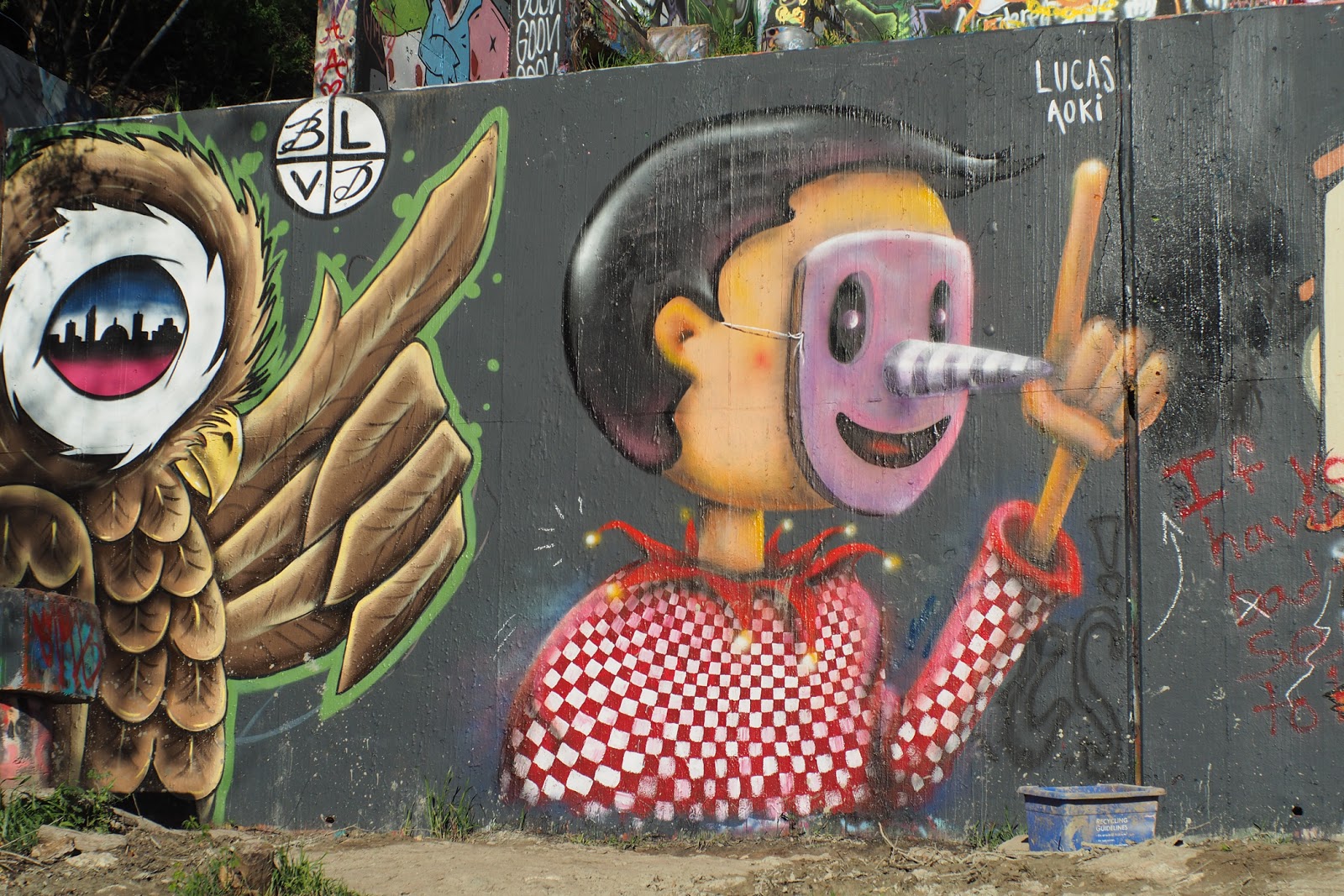 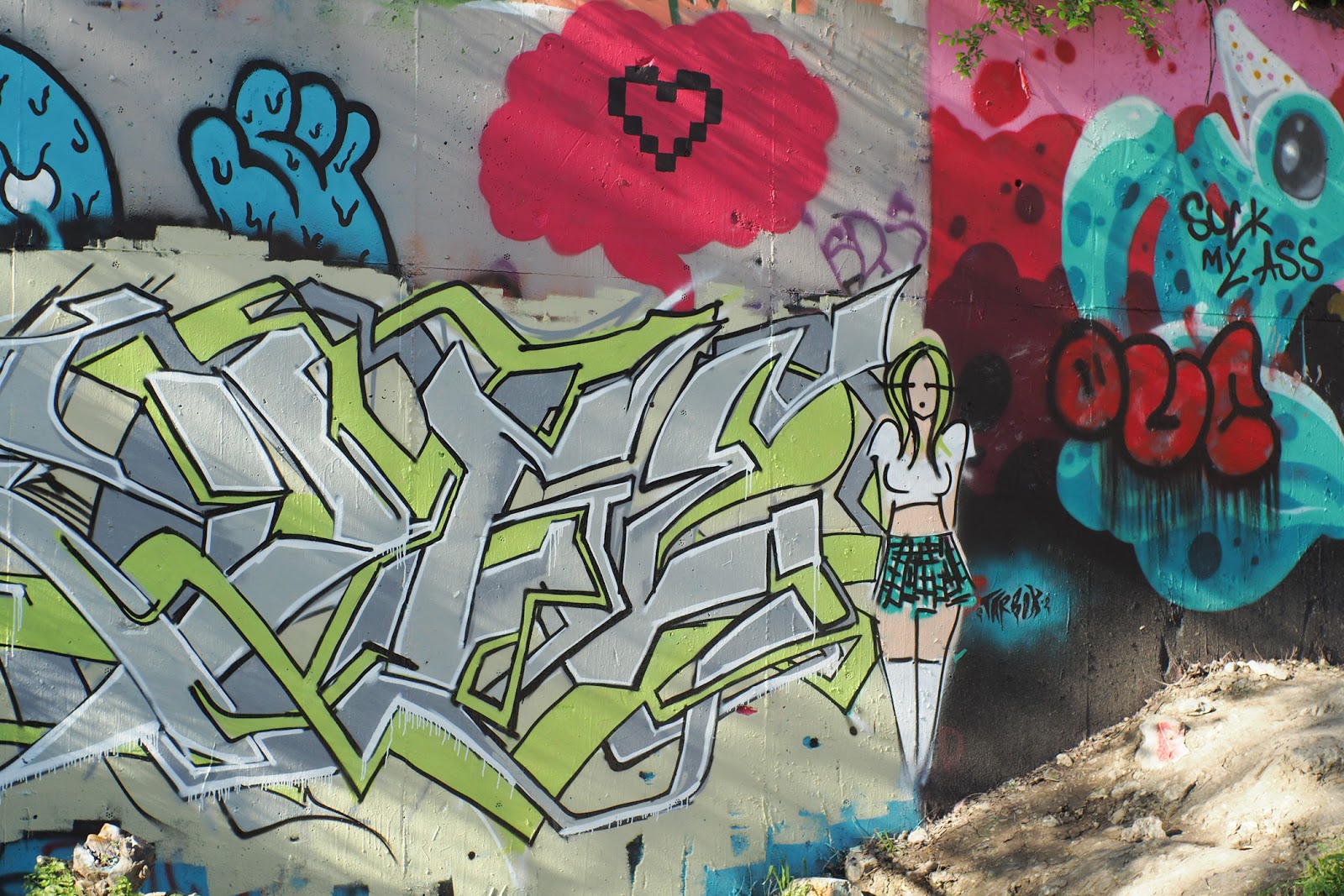 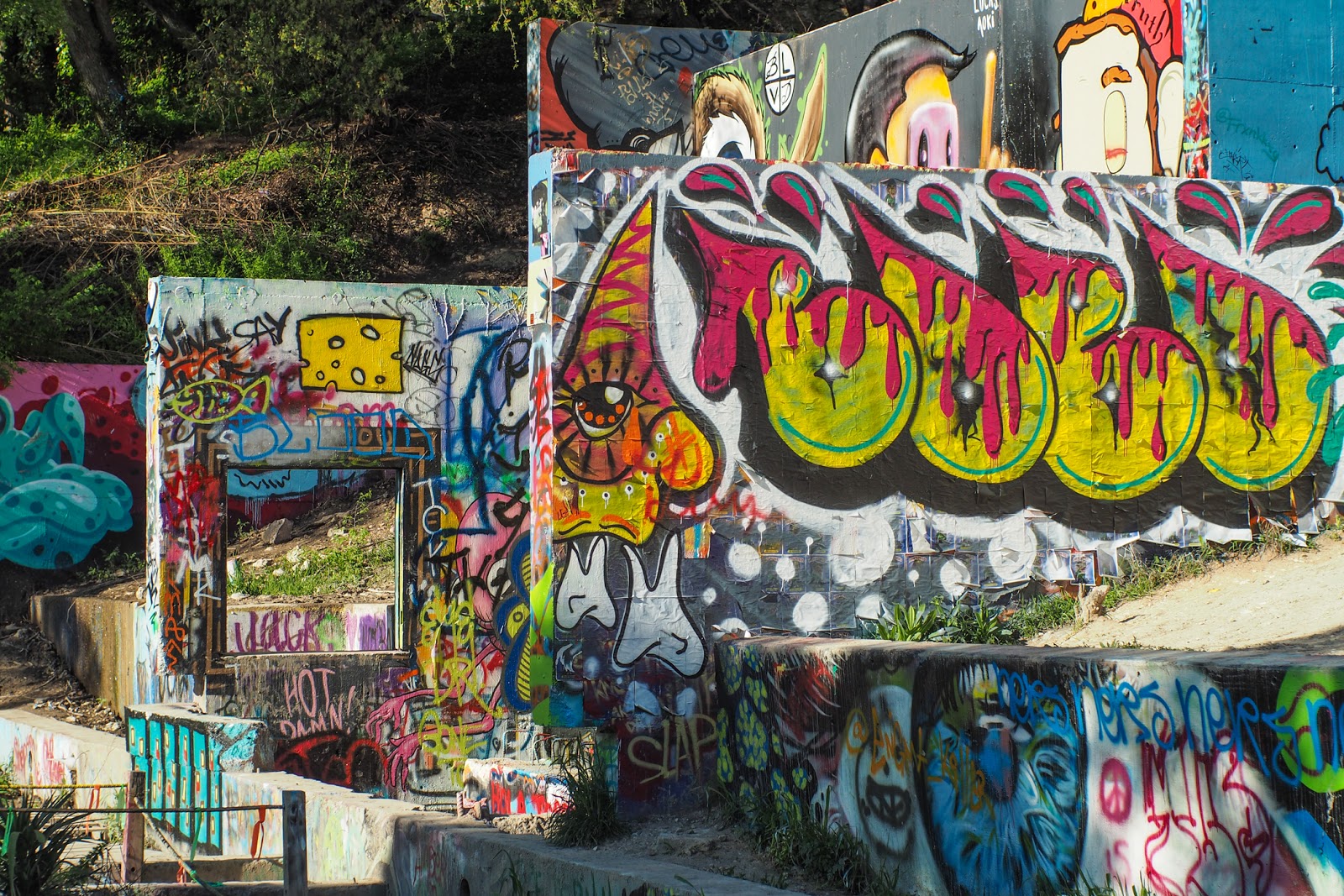 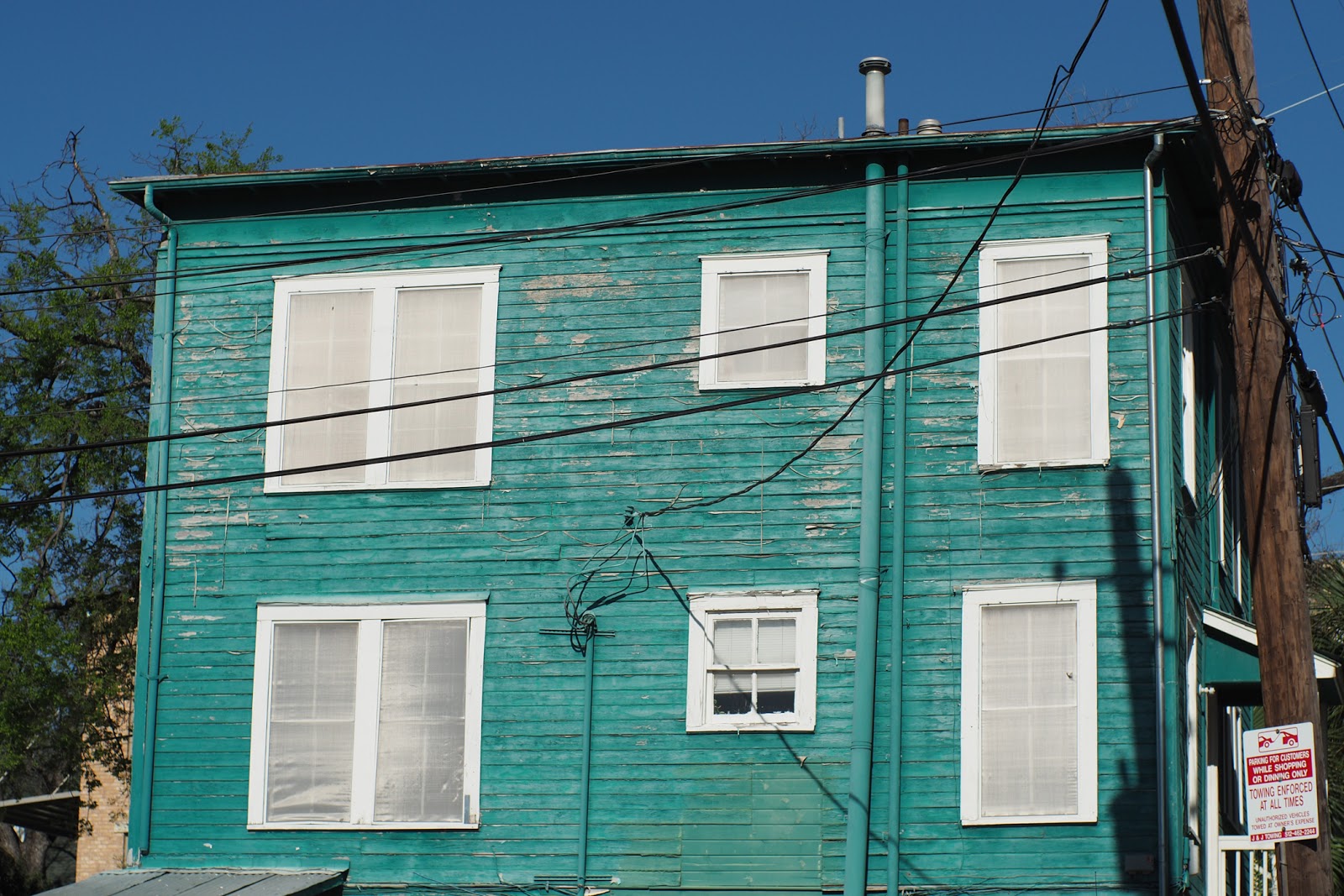 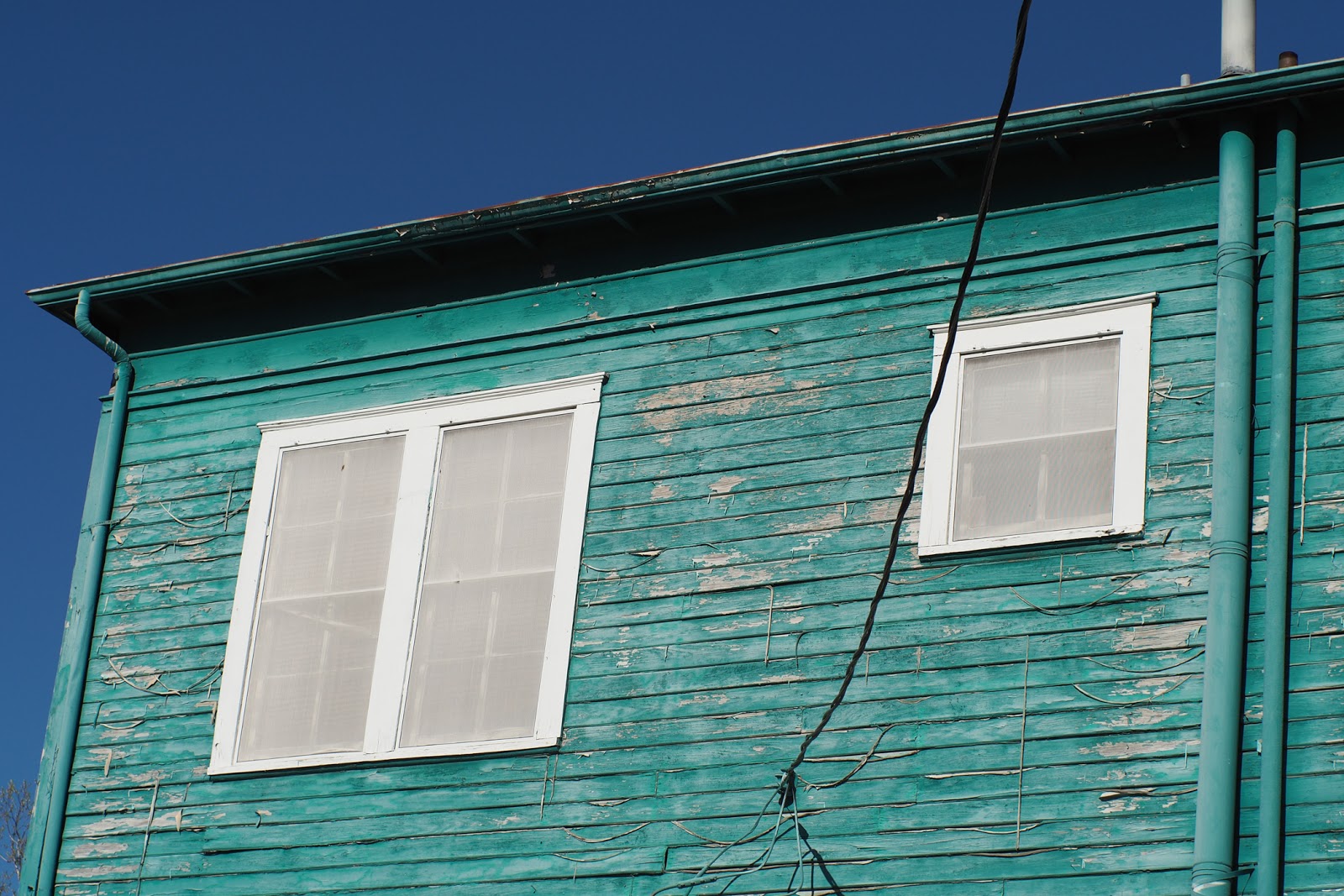 Posted by Kirk, Photographer/Writer at 14:58 5 comments: