Stories from the field. Working in Austin's legendary heat. And humidity. 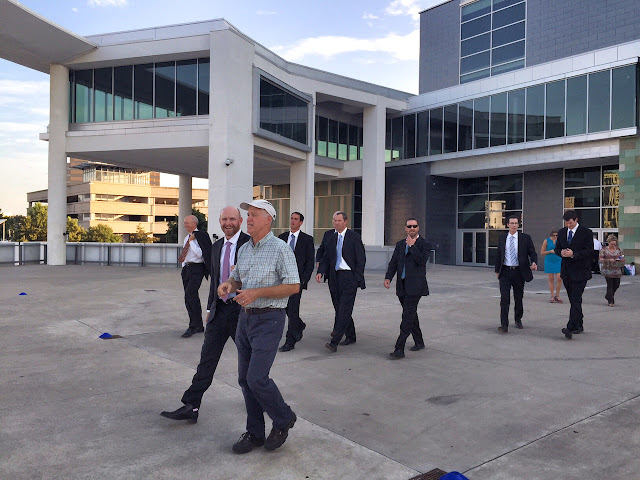 Leading a group of doctors to the shooting location.
(all "behind the scenes" images courtesy of James Webb.
©2015 James Webb. Taken with an iPhone 6).

Way back in June of this year a client called and we talked about shooting a new version of an image we'd done nearly six years ago. We all knew the location at which we wanted to shoot. It was the front "patio" of the Long Center, which has a great view of the downtown Austin skyline. But we all agreed that the Summer heat and the long days would work against us and so we delayed the shoot until October 12th. We calculated that the sun would set at 7:06pm and that we'd be in open shade and would have perfect light on the skyline right around 6:30 pm.

The photograph was a group shot of twelve doctors who work together in an oral surgery practice. They would all be wearing suits and ties for the photograph.

Yesterday morning I woke up and looked at the weather forecast. It's usually in the 80's this time of the year. My infallible iPhone app told me we were looking for a high of 97(f) with high humidity which yielded a "heat index" of somewhere around 104-105. Since we planned on two locations, a five minute walk apart, and since I'd be hauling lights, stands and sandbags with me, I called a great assistant and booked him.

For the first shot we set up the Elinchrom Ranger RX AS flash system with one head running at the full power of the pack. It puts out 1100 watt seconds into one head. I used a 42" silver umbrella as a modifier. We had a nice breeze (a blessing and curse. Blessing for the subjects and crew; curse for the umbrella wiggling twelve feet in the air...).  We sandbagged the light stand with the 18 pound strobe pack and a 30 pound sandbag. 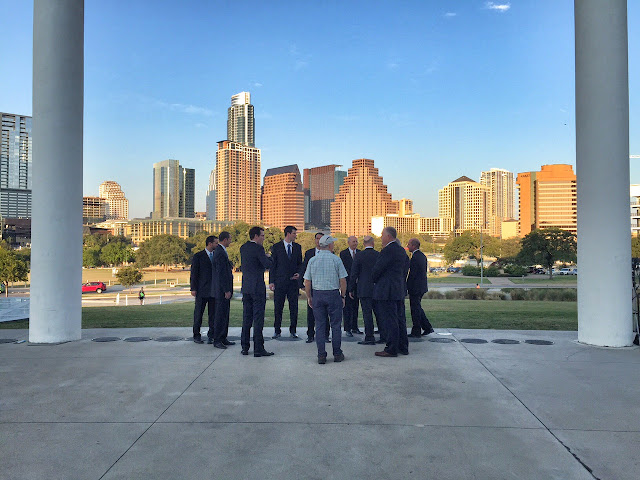 When we finally got everyone rounded up and positioned my art director came over to me and showed me the screen of her phone. The temperature at 6:25 was needled in right at 99 degrees. We both laughed. We could have done this shot in August and it may have been cooler. I don't understand weather but a really nasty high pressure system seemed to get most of the blame. A lot of people were walking around with sinus headaches yesterday.... 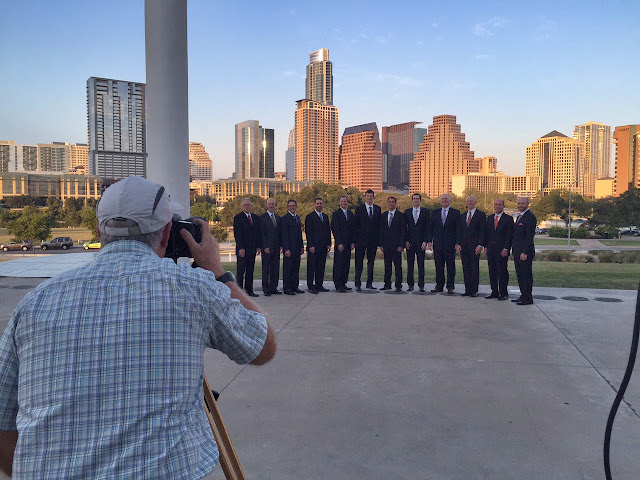 Once we got everyone positioned (notice the sweet little arc I have working...) we fired up the old Nikon D810 with the 24-120mm f4.0 on the front and banged out a series of test shots and then ten or fifteen serious shots. Since we were working the flash at full power we had five second recycle times and I had to be mindful of my shooting cadence.

The images looked great. I will have to spend some time changing one guy's shoes from brown to black, take some reflections out of some eyeglasses and generally take the red out of several peoples' cheeks but all in all, the first shot was a success. Yay! 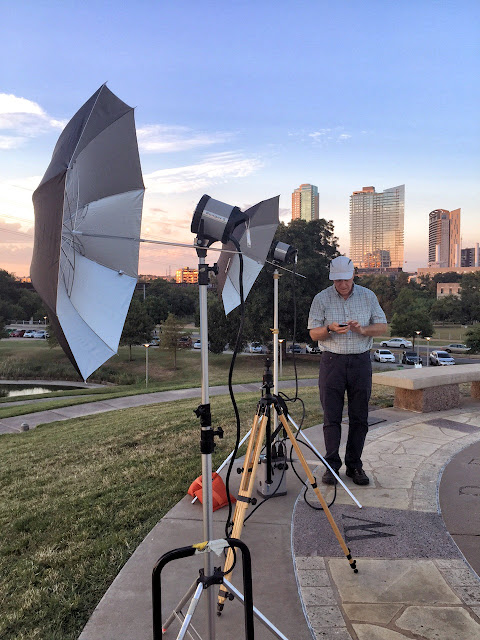 My assistant and I packed up the gear, stuck it on our cart and headed off, cross country, to our next location; a manmade hill about five hundred yards due west. There's an easy, circular path that winds up the hill but we didn't have time for that nonsense so we went right up the side to the top. The view there is equally nice. While we were setting up the doctors were changing (in the air conditioned comfort of the Long Center = Thank you! Long Center!!!) into jeans and casual shirts for our second shot. 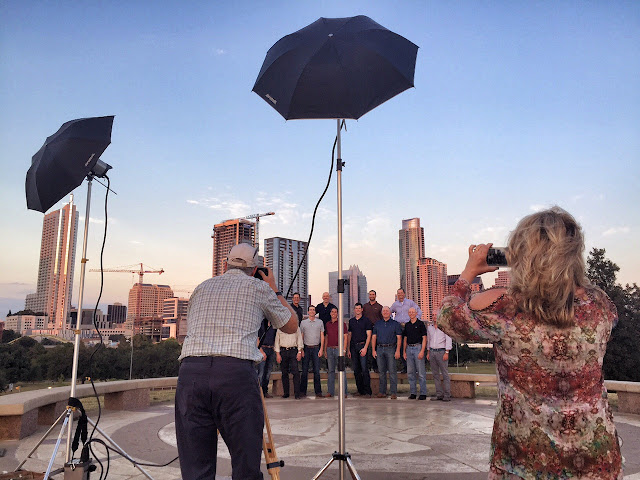 For some reason I decided that this needed to be a two light set up. We also had to keep dropping the shutter speed as we photographed right at the moment of the sunset. When we finally wrapped and pushed the laden cart back to the parking garage the temperature had fallen to a more comfortable 96 degrees. Don't you just love it when you pick up the phone and the client says, "Let's shoot outside!!!" 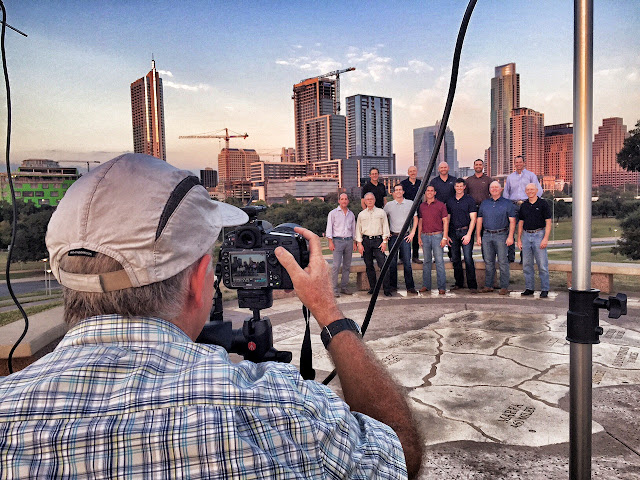 The doctors were all in good shape. The heat didn't seem to effect anyone. And the images look good. I guess that's all we can ask for....  Yes, we still do this for a living. Almost every day.

Posted by Kirk, Photographer/Writer at 11:14 6 comments: