Two different renditions of the same Third Street store front. Which do I like more? 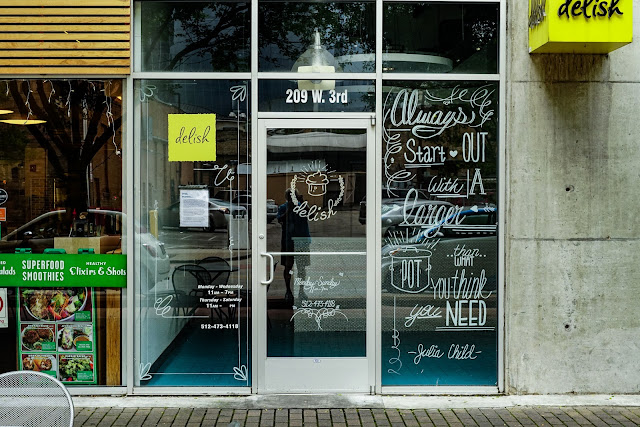 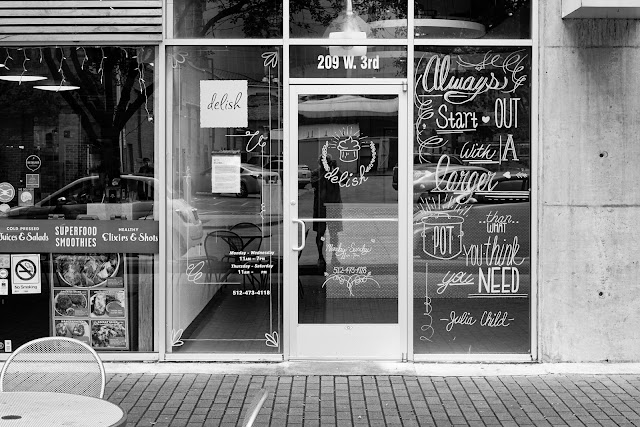 These two photographs were taken within a couple dozen seconds of each other. Just the amount of time it took to switch the "creative style" from monochrome to standard on a Sony a6300. I always liked this little cake shop. It was called "Delish." They recently closed but I guess that happens to a lot of start up businesses; it's just that they made really nice stuff....

Working the tight crush with some good tools. 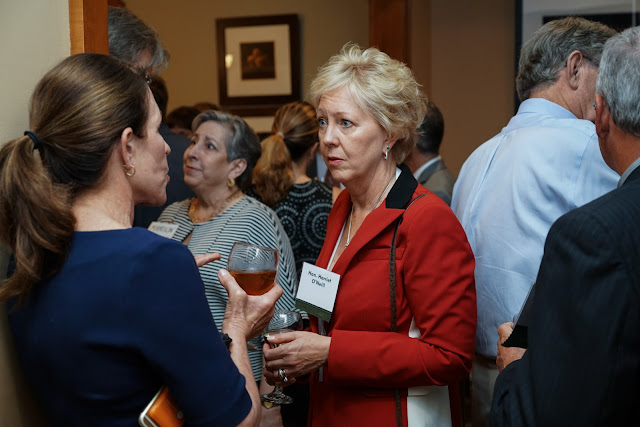 It's a been a while since I've done a simple job like documenting a cocktail reception in a private home. There's a non-profit that I like to work with called Texas Appleseed and they were honoring a Texas judge who is involved in fixing the foster care system. There were about 50 people in attendance and I had no real brief other than to get some good photographs. I shot a bunch of images of small groups standing together and smiling for the camera, and I covered the various speakers and the giving of a small award; but I also like just catching various candid shots that show the scope and tenor of the event.

The last time I did a small shoot like this I was using Nikon equipment, like the D750, along with the 24-120mm zoom lens and whatever Nikon flash seemed to work best in the moment. For years Nikon was the leader in flash tech, and as a long as I used the FEL button I could get pretty consistently well exposed images. I had yet to try the same kind of shoot with the EVF-enabled, hybrid focusing, Sony A7R2.

There's one accessory I've yet to buy for the Sony cameras and that's a dedicated flash. Most of my work is done with studio type flash, or large LED lights or even fluorescents. I knew I'd need to grapple with a hot shoe flash eventually because I do end up shooting five or six, multiple day events that require on camera flash. I just hadn't crossed that bridge yet.

The lovely home in which the reception took place is close by in my neighborhood. I tossed my RX10mk2 in the car as a back-up, grabbed the A7R2, an extra battery (always an extra battery), the 24-70mm f4.0 Zeiss lens and a fully manual Cactus RF-60 flash that's been in the studio for a while. I carried in the one camera and the flash and left the back up camera in the car. No camera bag, no other toys.

It took maybe three test shots, with the flash bouncing off the ceiling, to determine the right manual exposure settings. I was shooting at f5.6, 1/80th of a second at ISO 1,600. I set the flash output to 1/16th power and looked at a handy histogram. Everything was right on the money.

While I used to use center point AF in jobs like this I decided to use zone AF and selected the center zone. I also turned on the face detection AF. The camera nailed every single shot. Every one. Right where I would have put the focus if I had faster reflexes and a perfect finder....

The ceiling height never changed and my camera-to-subject distance was relatively the same throughout so the overall exposure settings on the camera and flash never really varied. This meant that all 188 frames that I am sending over to the client this morning have a uniform density and color and required little intervention in Lightroom. I did use the "soften skin" brush on a few of the tighter photographs of a few people, just to flatter....

I used the camera with the AF-illuminator turned off and trusted that it would work out the best focus. I trusted the initial tests I did with the flash and camera in tandem. This all left me free to circulate and quickly capture any image I wanted, with the relative assurance that I'd have usable frames.

In all I shot about 360 frames and ended up with 26% left on the battery life indicator. The camera warms up the longer you have it on. I never got a temperature warning but the left hand side of the camera was warmer than I have experienced with any other camera in memory. The flash, set to 1/16th power, handled everything with aplomb and could probably have gone on flashing for hours and hours longer. And, at that power level the recycling time really is instantaneous.

It was fun to work with such a small assemblage of gear but the files from this small package were pretty amazing. I shot raw, converted to high quality Jpegs in Lightroom, backed up these Jpegs in the cloud and then.....actually.....erased.....ALL of the raw files from the hard drive I'd been working on. No going back. Felt kind of nice to free up all that space at the end.

Just thought I'd discuss something I don't read about fairly often; a simple, non-dramatic but typical, use of the A7R2. Oh, and the dates, with a toasted almond in the center, wrapped in bacon, were delicious.
Posted by Kirk Tuck, Photographer/Writer at 10:28 9 comments: