I read that some "professionals" are considering replacing their 35mm style cameras with the new Hasselblad X1D. I almost spit out my coffee because I was laughing so hard... 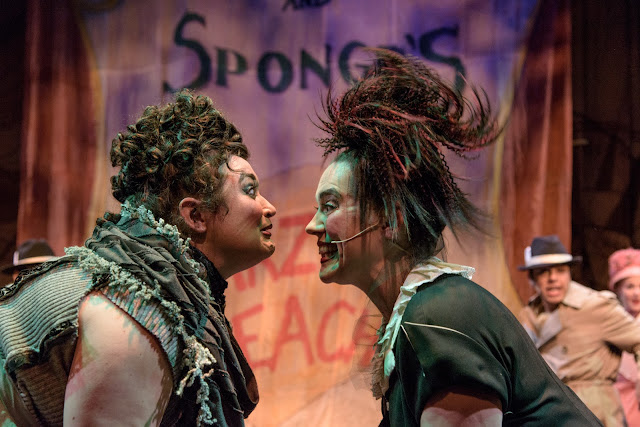 Photograph from "James and the Giant Peach", a Zach Theatre production.

People say zany and inane stuff all the time. And, in the field of photography, they love to conjecture about what "professionals" might buy or want. But usually the commentators do so in flights of fancy and with few facts or evidence...

A case in point is the suggestion, made in many corners of the internet, that Sony, Nikon and Canon better beware!!! A new cowboy is riding into town and he's packing ---- medium format!!! And, since it is only almost three times the price of the best, current pro 35mm style camera on the market (the Sony A7R2; according to DXO) there is the idea that hordes of amazingly wealthy, working camera professionals (because, you know, it's a lucrative career path) might just weigh up the apples and oranges and go for the power, glory and obvious superiority of the medium format choice.  Not so much in pursuit of better photos but to differentiate themselves from all the other well heeled, working photographers out there. You know, to differentiate them--- in the eyes of their clients...

The assumption is that they'll dump the Nikon D810s and the Sony A7R2s (and whatever Canons) and embrace the mirrorless, contrast detect-only AF, snail pace frame per second Hasselblad X1D --- and its two amazingly flexible lenses, in order to make their businesses rock and roll. Even as I read the first volley in this line of reasoning I was busy trying to keep from spitting out a mouthful of coffee because I was laughing so hard.

While there are professionals working in a lot of different marketing segments most of them have a large intersection on the Venn diagram of needs when it comes to cameras. One of my main concerns is that I always have an identical (or close to it) back up camera. If a camera breaks and needs to go back to the tender mercies of the camera company's repair department, or gets stolen, I need to have a second body so I can finish the job, get up tomorrow morning and go out to shoot again. In all the pro systems based on the 35mm size sensors you can get a similar body at a lower price point to play the role of "safety net" for you usual shooting camera.  For me the Sony A7r2's first line of back up is the A7ii. But I can follow that up with an a6300 and then the a6000. All the cameras can use the same lenses, have the same basic menus, deliver the same color family characteristics and, miraculously, all use the same batteries.

If I ante up for a round-the-world-shooting-extravaganza I can do so with a back-up body from Sony and still spend less than $5000 for camera bodies. Really good camera bodies. Nikon and Canon users can do the same thing. If you put together a second body for the new X1D and you've spent $18,000 before you've even sprung for lens #1.

But speaking of lenses, it seems that the world of photography on the web has done a 180. Now lens choice is not an issue. When Sony was kicking everyone else's butt, last year and this year, all I ever read on the review sites was....  "Well, the sensors and the camera are incredible but....there are only 14 or 15 Sony lenses and maybe 25 to 30 third party lenses to use with the system--- how sad and tragic for the pros..."  But, of course, Sony photographers can cherry pick from all the major lens lines with help of inexpensive adapters. Heck, I can even use my 1970's era Hasselblad 150mm Sonnar on the A7R2. They opened up the  mount. It's an open system.

But don't try mounting that V lens for your old Hasselblad on the X1D body because: a. It won't fit. b. It won't actuate. You might be able to physically mount it, when and if someone comes out with an adapter, but without an electronic link to the lens shutter the only two things you might be able to do with the package is to look through the finder and maybe shoot some video. Some 1080p video at 30fps. You know, like video from four years ago....

So, if only a handful of very, very expensive lenses will work on this new model how much business can we do with the two current lenses? Not much. The longer lens is too short and the shorter lens is too long. A lot of us make a living shooting portraits and we need something between 110mm and 140mm to get a decent head and shoulders portrait without the dreaded foreshortening effect. But that's not even in the cards for the next lens in the X1D pipeline. That would be a 24mm equivalent which leads me to believe that the camera system might be aimed at the highly affluent part of the market that shoots real estate interiors for realtors and brokers. Which might make sense give that the camera uses CD-AF and who knows what the follow focus or fast lock on capabilities of the camera really are... But let it lock onto the details of a high rise condo kitchen and then --- stand back!

Of one thing I am fairly certain; it will be win a gold award from Digital Photography Review. Why? Simple! It has everything that every working professional truly needs to make great images in the fast breaking imaging world of today. It has wi-fi AND a touch screen. And everyone knows that Barney and Company prize those two attributes to a much greater degree than the boring stuff like: great color, high sharpness, beautiful tonality, etc. Just as long as we can stroke the rear screen and get a reaction from the camera we'll have their whole-hearted buy-in.

I have no doubt that the camera is as beautifully designed and finished as the dashboard of an Aston Martin Lagonda and it will have much appeal to hipsters of a certain coupon clipping class. But every pro worth their salt would trade all of that for: Accurate and quick focus. The lenses they need in order to get the jobs done while honoring their unique vision. The ability to have back-up gear. The ability to use a wide range of lenses readily available in the market. Etc.

On a more positive note: I read that the battery is big and powerful. And I like the choice of the mini-HDMI port instead of a micro-HDMI connection. Oh, and the engraving that will tell every pro, every time he or she uses the camera, that it was handmade in Sweden. Got it. Hermes scarf anyone?