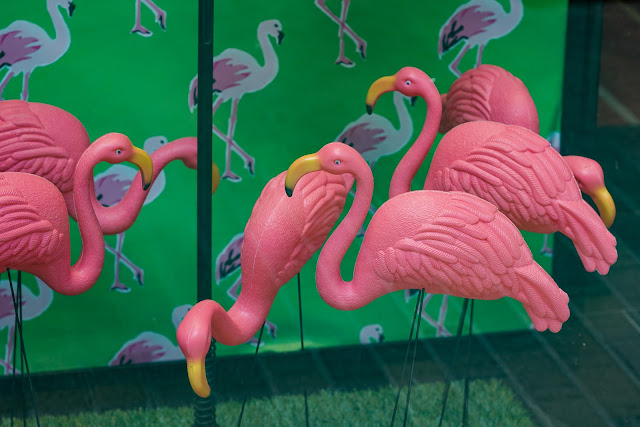 Remember those great American cars from the 1950's? They were enormous and had wonderfully rounded and sculpted lines. Five tons of rolling art. Back seats that doubled as beds. Infinite trunk space and so much more. My very first car was a 1965 Buick Wildcat. It had an enormous V8 engine, a hood that took up real estate and an air conditioner that could chill a six pack of beer between San Antonio and Austin. Not quite as voluminous as the 1950's Cadillacs but still formidable in its presentation.

Except for collectors we don't drive those cars anymore. Cars have evolved. Maybe not in a sexy direction but certainly in a more practical direction. Padded dashes replaced sweeping metal ones. Headrests and seat belts were added. As gas soared in price cars shrank in size and weight. The sexy lines of the body styles were replaced with "jelly bean" designs that are more efficient at moving through air.

These cost cutting and efficiency changes were partly a result of the 1950-1990's exodus by Americans to far flung suburbs which created Herculean commutes. Cars had to be cheaper to acquire and operate as families moved from owning one car to owning two cars and accumulating mileage at a dizzying rate. With the decline of small towns and compact cities it became impossible to commute by walking for most people. Now (with the exception of people living directly in downtowns) it's virtually impossible to go anywhere without a car. That moves the idea of the car away from an aspirational acquisition to a necessary commodity, which strips away the glamour and allure of owning and using them.

If the millennial generation is any indicator we won't be going backwards to big car worship any time soon. In fact, this rising generation is almost completely car indifferent. Makes sense that something like 90% of Corvette buyers and 80% of Porsche buyers are also getting ready to apply for Medicare.

So, when I went out to buy a car a few years ago I had three parameters on my radar: Good gas mileage. Reliability. The ability to put enough gear into the car to make it efficient for business. Gone was any desire for the 400 horsepower cars of my youth. Where could I drive them fast? Not in Austin. Too much traffic. Gone was my lingering nostalgia for my old Karmen Ghia. Where would I put that Pelican case full of LED lights? And the C-Stands? And the nine foot long roll of seamless paper? I bought a Honda CRV but I could have done just as well with a Jeep Compass or a Ford Escape or a Toyota Rav 4....

In decades past Texas photographers seemed to have a penchant for purchasing used (or New, if they were doing well financially...) Chevrolet Suburbans. The rationale was the sheer amount of gear they could load into the vehicle and still have room for an entourage of assistants. I wonder now if there are any clients left who really need photographers to show up with tons of gear and a gaggle of people to move it around. It seems so ---- inefficient.

But that brings me to photography in general. When I started shooting for fun, and then for money, the camera that the masses (and I) thought was the coolest thing to own in the imaging universe was the Nikon F2, with a big motor drive on the bottom. There were some zooms floating around but those were the days when we strived to arrive on our jobs with a shiny Halliburton suitcase full of prime lenses. Single focal lengths. And we didn't want to specialize so we felt like we had to carry a full range of lenses in order to be ready for anything. It wasn't at all rare for someone to arrive and open their steamer trunk-sized Halliburton to reveal lenses from 15mm to 400mm in closely spaced focal lengths. Something like: 15, 18, 20, 24, 28, 35, 50, 55(macro), 85, 105, 135, 180, 200, 300 and 400mms. No wonder we felt the need for assistants; especially when one considers that there were no wheels on those Halliburton aluminum cases...

With bags full of Kodachrome 25 slide film we also needed as much light as we could deliver to the film gate. Those were the days of 2400 watt second and 4,000 watt second Speedotron and Norman electronic flash systems that tipped the scales at 30 to 60 pounds. And that was just for the box, it doesn't consider the weight of cables and heads and stands and more.

And none of this was efficient. Not at all. With the extra people, and the mountains of gear to get from one location to another, or one room to another, a hard working professional might only get four or five set-up shots done in a day. Add models to the mix and the number of shots shrinks even more.

So, what is my point in recounting this stroll down memory lane? Just as we are paring down the size and inefficiencies of our transportation options it would seem, from looking at the photography landscape, that it makes sense to do the same with our cameras and our basic working tools. We can still get from point "A" to point "B" with more efficient gear, we'll just spend less money and less time getting results that reflect the targets at which we are now aiming.

Just as independent bricks and mortar book stores have disappeared from our daily environment so too have traditional portrait studios. I can no longer drive around Austin and see large, gold framed, 24 by 30 inch "master" portraits in mom and pop studio show windows. No more large and gaudy portraits of debutantes and pledge sisters. The saccharine, soft focus child's portrait with a field of bluebonnets in the background has disappeared as have most of the local labs that counted on gauzy, big canvases of heavily retouched portraits to make a profit. Gone except in the most depressed and backward areas. Relics of a different aesthetic period in our culture.

Along with the retreat of the big framed, canvas portraits is the retreat of diffusion filters. vignetters, posing blocks, posing tables, English countryside backgrounds. Weathered (plastic) brick backgrounds and all the trappings of conventional, last century portraiture. It's a similar view over on the commercial side. The portraits we do now are environmental, for the most part. The lighting is either what is present in the environment or a good, designed approximation of that light. The key to success is in making the images seem real. A slice of life. The ultimate ascendency of the "snapshot aesthetic" sometimes helped along by "supporting" light not obvious light.

I am rarely asked to shoot portraits for display anymore. Recently we did one for a utility company located in rural Texas. We were following a tradition in their offices but, with the arrival of a new CMO (chief marketing officer) that may be a thing of the past as well. No, most of our work is headed to websites. Microsite or pop-up online campaigns. Little of it ends up in printed magazines or brochures, and even less is destined for walls. We mostly get paid to deliver images for three targets: websites, trade show graphics, video displays. Many of these projects, I think, could be done with cameras like the Sony RX10iii which can handle a surprising variety of visual content creation needs. I'll confess that many jobs now can probably be done with the latest iPhone, with the value add being the styling, lighting, point of view and taste of the photographer.

Photographic jobs did not magically  grow in complexity, level of difficulty or sheer technical demand as the cameras have gotten better and better. In fact, we are at a point where we are still buying cameras to handle the memory of previous times and not really accessing them for the performances needed today. Products and portraits still need to be lit and composed well. They still need to be post processed correctly. But the need for hyper performance faded as post production creation blossomed.

We may still want, or be able to, continue to do the work the way we've always done it but I think it is smart to acknowledge that so much has changed and, along with it, the way we do the business of photography has changed. We charge now for what we know instead of how long we work or what kind of equipment we bring to bear. The client is licensing the look, not the machinery of production.

I've proven this to myself so many times in the last few years. It's the reason the Sony A7ii trumps the A7R2 for everyday use. I use the full frame camera not for the high resolution or the low noise but for the basic look that lenses provide on the full sized sensor. When I don't need or want that look there are many cameras with smaller sensors that work as well or better for specific tasks. To pretend that we spend our days shooting double truck print ads for very high production value magazines is self-defeating. Like trying to drop a 600 cubic inch engine into a Volkswagen Jetta for one's daily commute. At some point the suspension gives out. Or the post processing load becomes unwieldy.

The latest Zeiss (or fill in the blank with your favorite lens brand...) lens may make for sharp photos but I'm betting the discipline of using a tripod with your existing lenses will provide a lot more bang for the buck.

You don't have to change. But you should be aware that the photographic world is changing around you. I know this is an Olympic year and the focus is on the high end DSLR cameras made for capturing sports. But the other 98% of the market might (most probably) be better served adapting the newer technologies and formats in order to make their work the best it can be.While being affordable, portable and fun to drag around.

I like change. If I can add value to any camera then all change works for me. If I can't add value without a specific cameras system then I have become nothing more than an equipment rental house. No glory for me there.

Shift happens. It may mean your cameras become cheaper, lighter, easier to use and more fun. Can't see how fighting that makes for a good business strategy. We're all in the consumer culture together. The DSLR was an aspirational tool a few years ago. Now vision and knowledge are the aspirational tools and the cameras are just the conduits.  The big camera and the bag of lenses seems now a bit like a Member's Only Jacket or a Camaro with a hood scoop. No longer cool and coveted. Now just an ungainly tool. No wonder sales are dropping; we no longer need to bring "window dressing" cameras to work. Now we can just use what works for the projects in front of us.

The lights are still too big....

I look forward to reading about a photographer from a newer generation who ably does high end advertising photography work with nothing but a long focal range fixed lens camera. Something like a Panasonic fz 1000 or a Sony RX10ii. It would signify to me that his or her client was hiring based on a portfolio of well seen images or video and not the last century swagger of gear ownership.