The Sony RX10iii as a photojournalism machine. Impromptu coverage of a political protest. 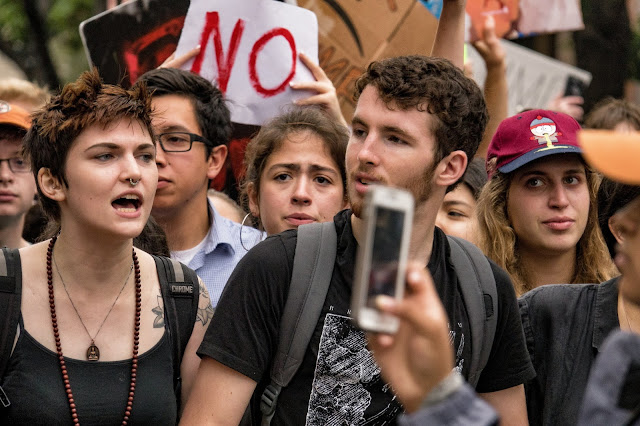 I was downtown meeting with a client yesterday and I got in my car to leave the parking garage; I turned on the radio and the local station had a quick traffic segment that informed me many streets in the downtown area were closed to accommodate a political demonstration protesting results of the election. I was at ground central and figured I wouldn't be exiting the downtown area any time soon (at least not with my car) so I grabbed my camera and headed out to Congress Ave. The camera I just happened to have along with me was my trusty Sony RX10iii.

The protest was mostly young people from the University of Texas at Austin. They started their march at the Lady Bird Lake/Congress Ave. bridge and made their way up Congress Ave to the state capitol and then turned onto Guadalupe St. to continue on to campus. There was an enormous but unthreatening police presence all along the route. For the most part everyone was quite civil. The police didn't over react and, even though taunted by some small handfuls of opposition protesters, the main group of marchers was peaceful and did not go for the bait.

Protests are old hat for me. I've been covering them for decades. Whether you believe in the cause or not the emotions are real and the energy in a good protest march is amazing. Back in the 1970's, at UT, the bulk of the students would protest at the drop of a hat. I remember people chaining themselves to several trees that needed to be cut down to accommodate a new building on campus. It was a protest that drew thousands.... But I wasn't at this one to participate as much as I was to just document it for my own sense of Austin history.

One thing that made me so proud to live in Austin was police chief, Art Acevedo. He was not in uniform (although his black fleece wind breaker had an embroidered badge and his name on it) and he was strolling along just in front of the crowd, casually chatting with protesters, young media people and even counter-protestors. His presence inside the crowd was a signal to both the protesters and the police that we could still have a peaceful and open dialog with each other. (Go Art!!!).

Until recently I would have thought that the best way to cover something like this would have been with the digital version of the cameras and lenses I used to cover the democratic conventions in Chicago in 1996 and Los Angeles in 2000. That would have been two cameras (or more) with an 80-200mm f2.8 on one, a 28-70mm f2.8 on the other and a 300mm f4.5 telephoto with a  2x teleconverter in the (heavy) camera bag. That, and about 30 rolls of film per day....

But I quickly came to grips with the reality that the Sony RX10iii was head and shoulders above that kind of kit; both in my ability to carry it with no effort at all, and to effortlessly zoom in to 600mm and handhold perfectly stable shots with accurate focusing. The camera had a 128 GB SD card inside and I had an extra battery in a small Baggie in my pocket. The light rain didn't worry me in the least as the camera seems well weather sealed (same camera used extensively for the video of torrential downpours and flooding at the beginning of the Summer --- still clicking away).

The ability to go from really wide to super-tight with the twist of a lens ring was amazing. Setting the lens to f8.0 and the equivalent of 24mm meant depth of field forever. Setting the lens at 400-600mm and using it wide open meant lushly out of focus backgrounds. Not having a camera bag swinging around my waist meant I could move through the crowds with all the grace of a ballerina. Not having a bag full of lenses bouncing around meant I could sprint a couple of hundred yards forward to get a different look without breaking a sweat. Having gray hair meant that the cops weren't interested in me and neither were the students. I felt nicely unencumbered and invisible.

The RX10iii is not perfect. At the longer focusing distances the movement (body shake?) of the camera makes it a bit harder for the camera to find focus. At ISOs above 400 the camera gets just a little noisy --- but the noise isn't bad, color splotchy noisy, just grainy, film-looking noisy. Face detection works until you want to focus on one specific face in a crowd and then you are better off with a spot AF setting. If you are working in raw you can deal with the noise quite easily.

I only wish I'd brought a nice, handheld, interview microphone and a beautiful assistant; it would have been nice to interview some of the kids and see what they had to say. Each generation gets to protest because that's a healthy part of growing up. What I would have liked to have heard is their particular point of view at this exact moment in time.

This was my first protest photography since smart phones have completely assimilated all local humans.  (yes, a Star Trek "Borg" reference...). Many protesters, anti-protesters, police and media were busy shooting the event and enormous number of selfies. Phones were everywhere. Some how I got the phrase, "just phoning it in.." stuck in my head and it rattled around there for the rest of my time downtown.

If I were running a media/news content business I'd forego all the traditional cameras and hand each content producer on my staff an RX10ii or RX10iii and a hand held, dynamic reporter's microphone and teach them the rudiments of operating those cameras as both still and video cameras. They could pretty much cover anything but fast sports and motor car racing. Soon enough the PD-AF tech will even allow that. It's an amazing time to be out taking photographs.

As the parade progressed the rain got stronger and as the crowd moved on the side street where my car was parked opened up again. I turned around and headed back to the car. I still needed to get a bottle of Cabernet Sauvignon and a half pound of kale and brussel sprout salad at Whole Foods (my turn to cook dinner --- the salad was a good counterpoint to my wayyyy too rich version of Fettucini Alfredo with prosciutto ) and my camera and I were wet enough.  The march reminded me of the rich tradition of free speech we have here in the U.S.A. and how fortunate that yet another generation feels strongly enough about something to exercise that right.

This post is about my experience in photographing a march with my Sony RX10iii, it's not an invitation to weigh in about politics. We'll leave that to someone else's blog. Enjoy the photographs, I think the camera does a good job with reportage... Click to see bigger. 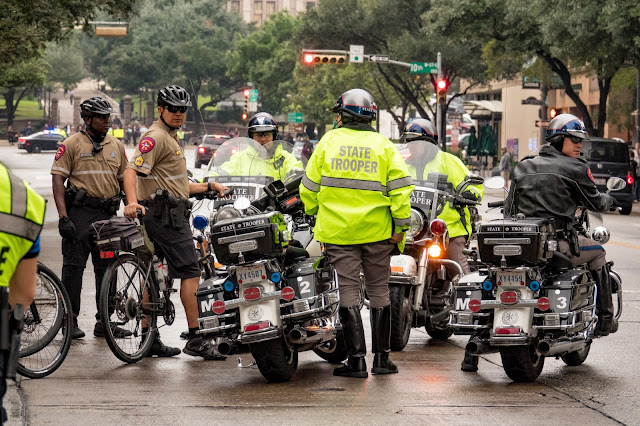 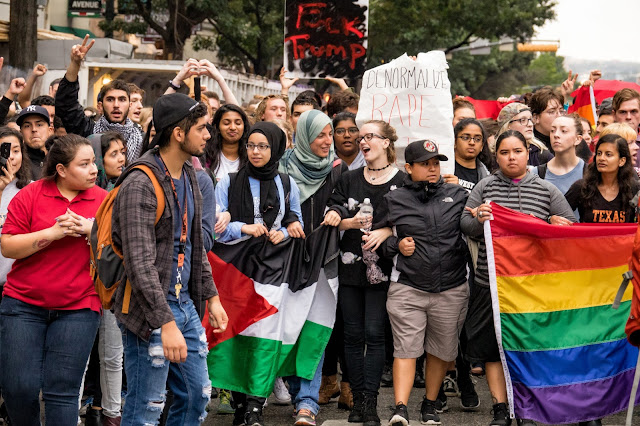 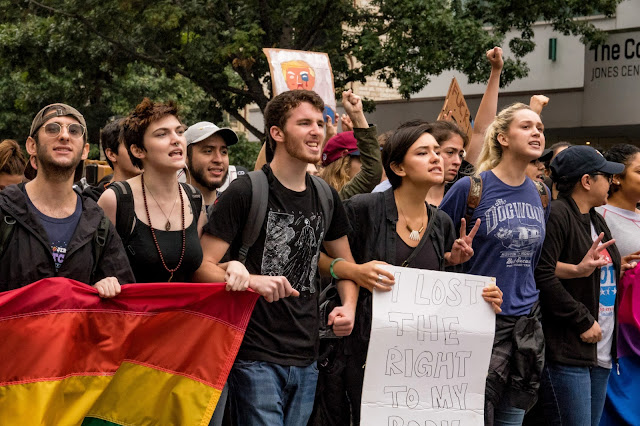 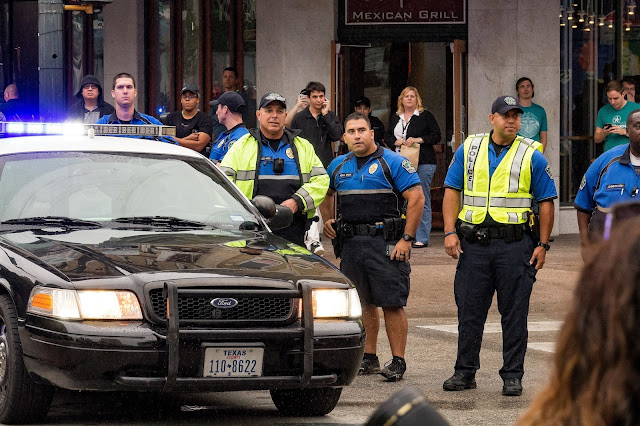 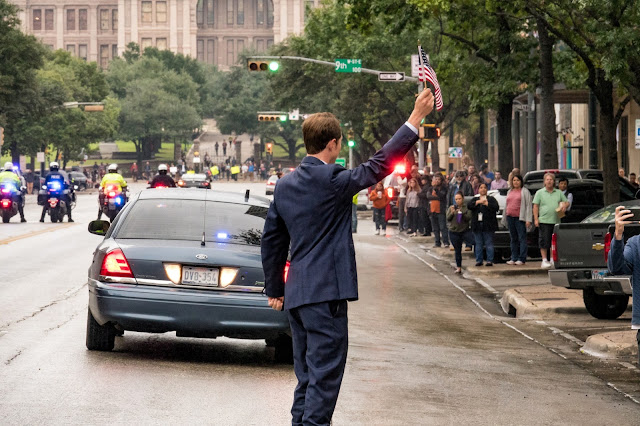 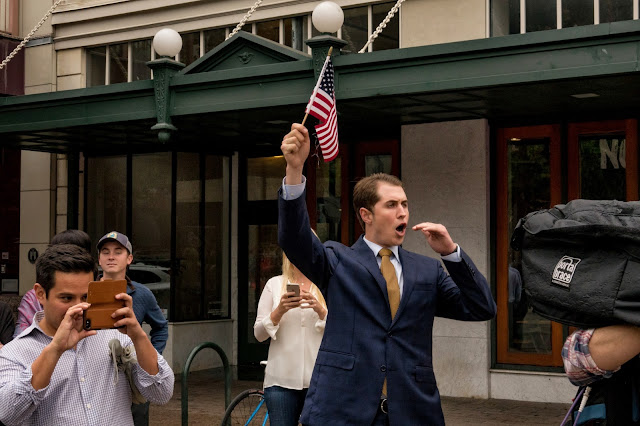 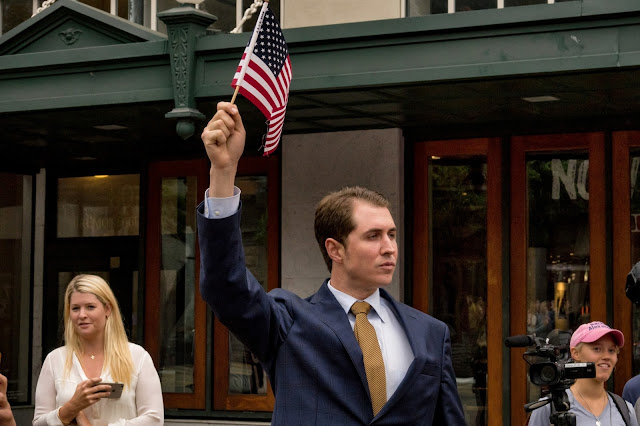 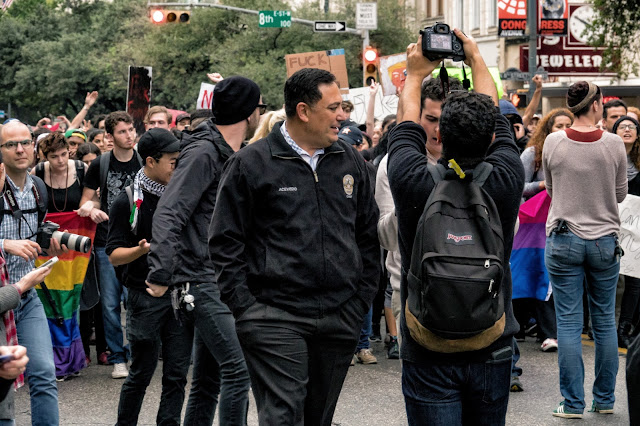 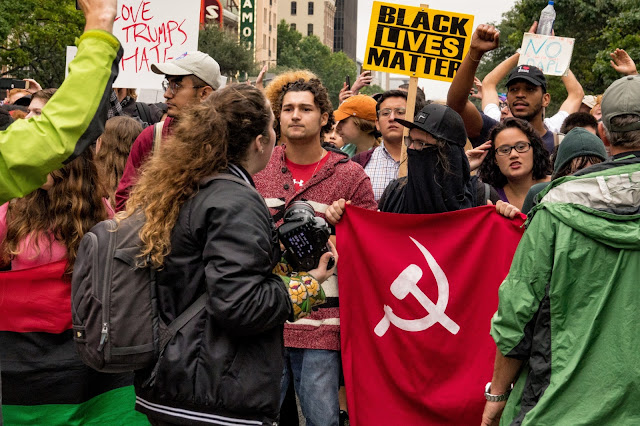 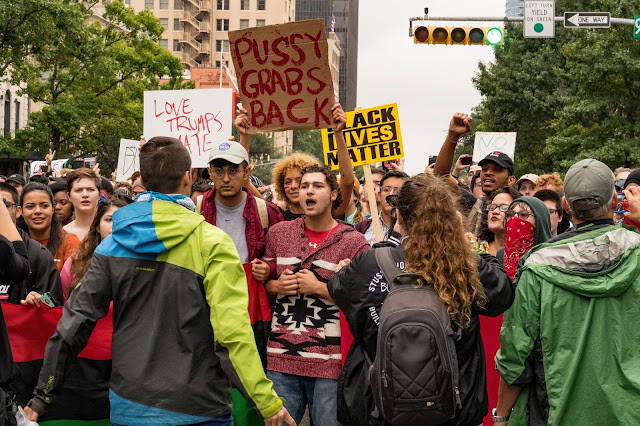 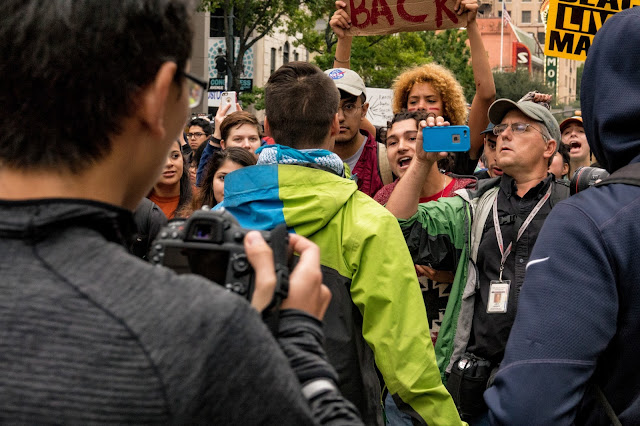 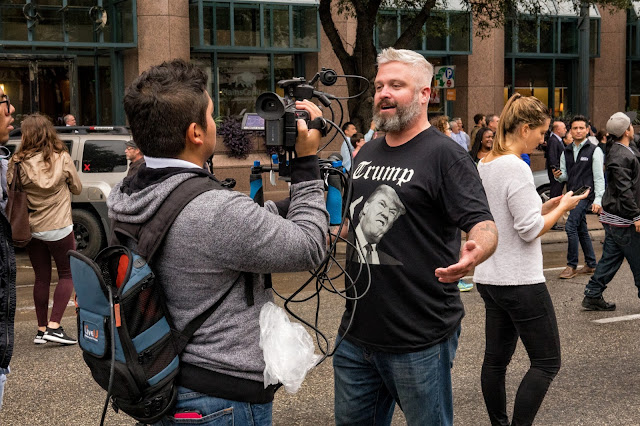 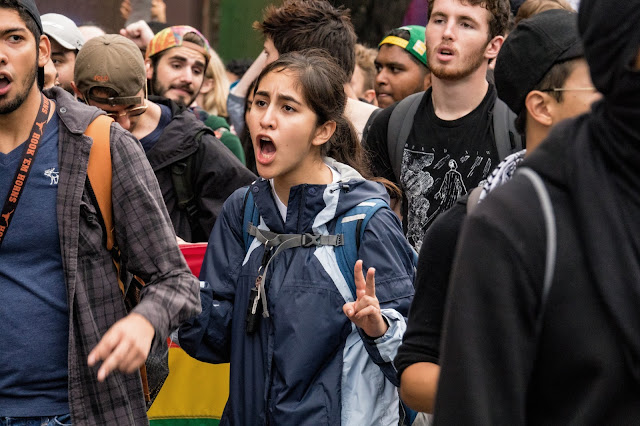 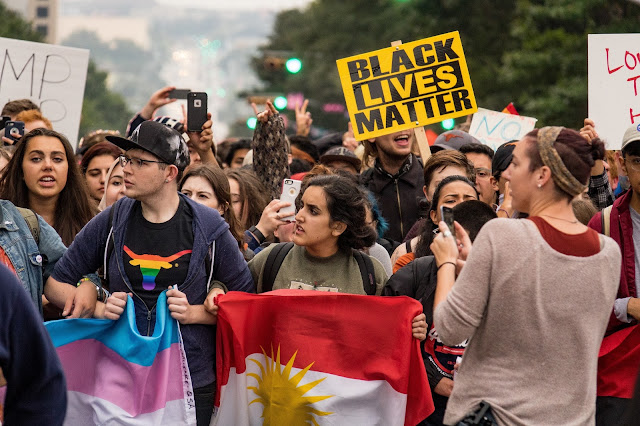 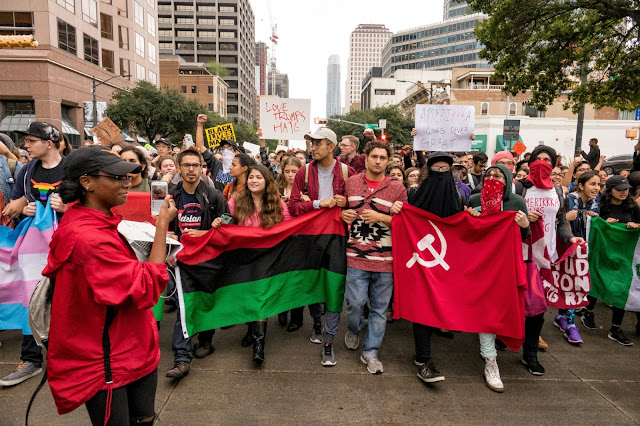 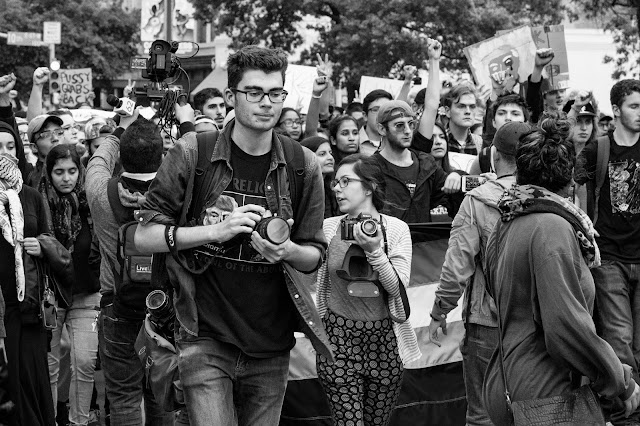 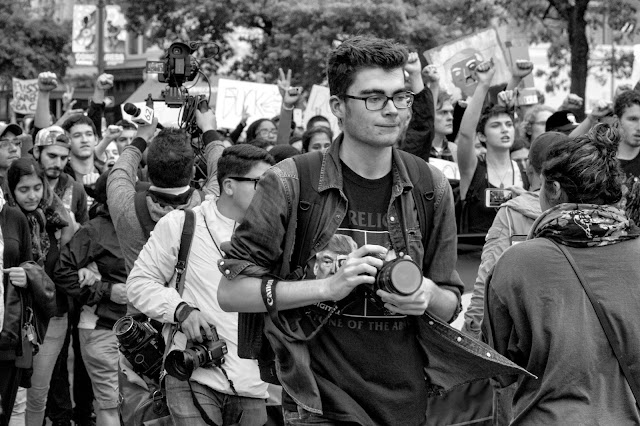 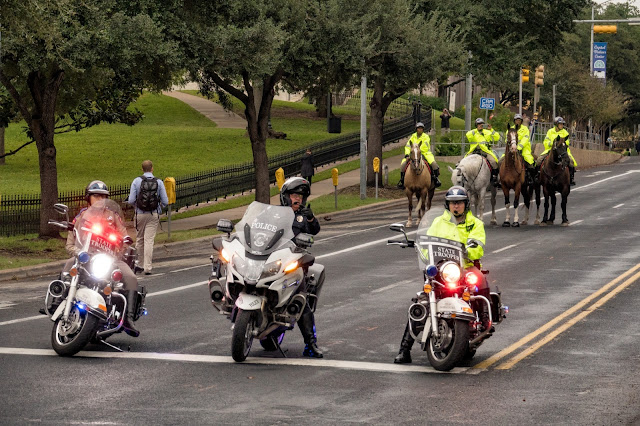 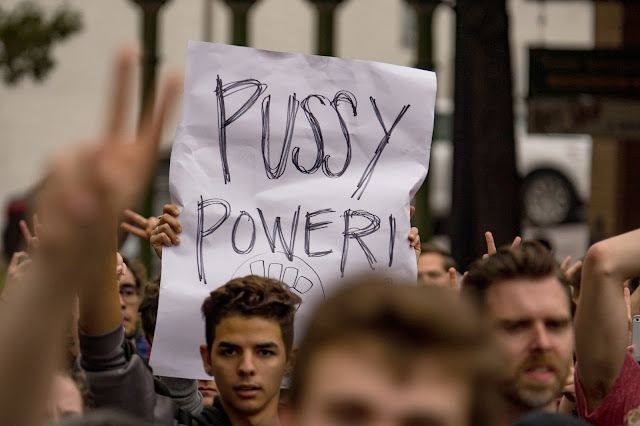 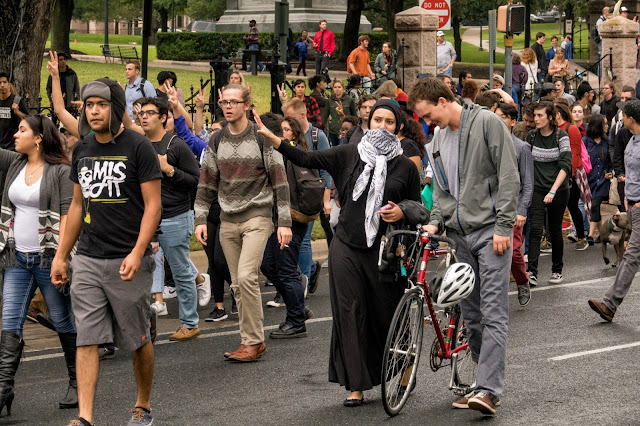 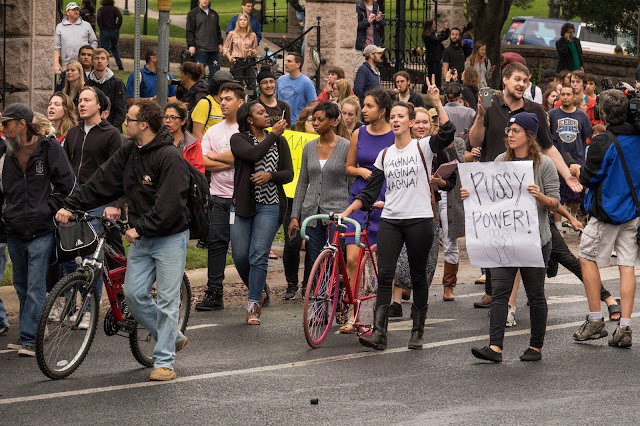 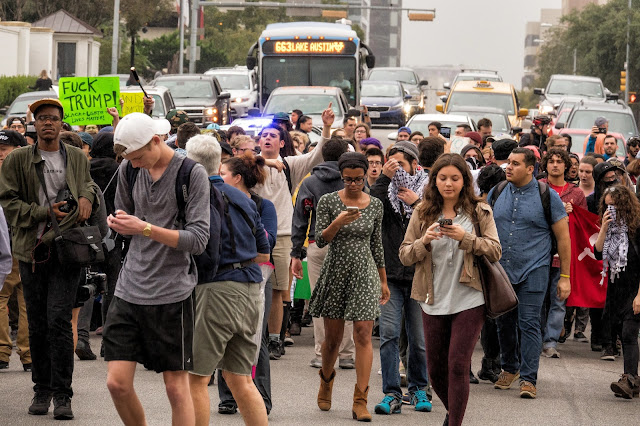 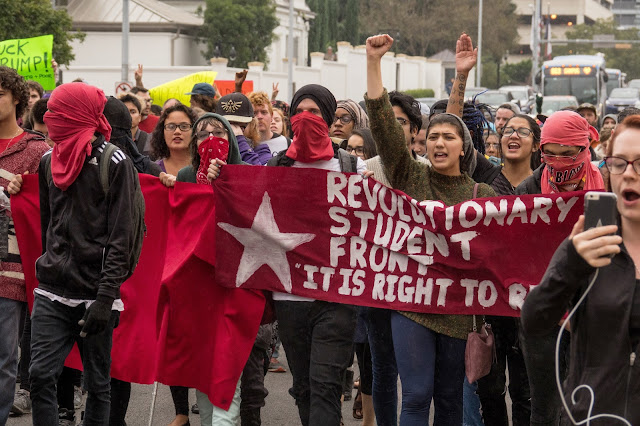 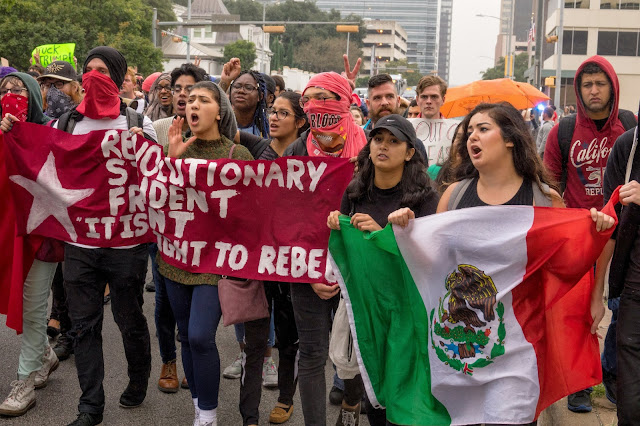 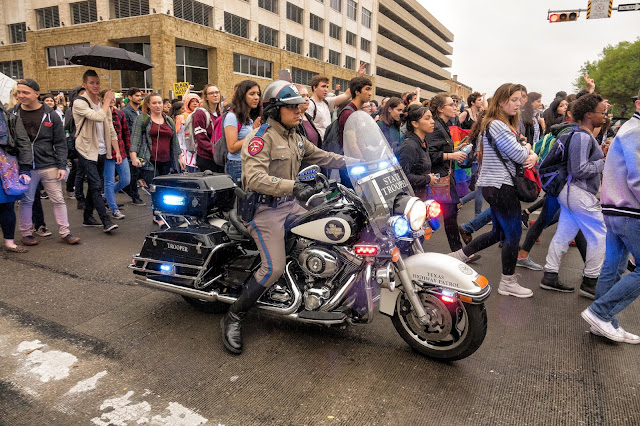 How Zach Theatre Uses My Images in Advertising. Just A Quick Post to See Actual, Commercial Photography in Action...

A strange inflection point for the camera industry. Nikon starts the layoffs. 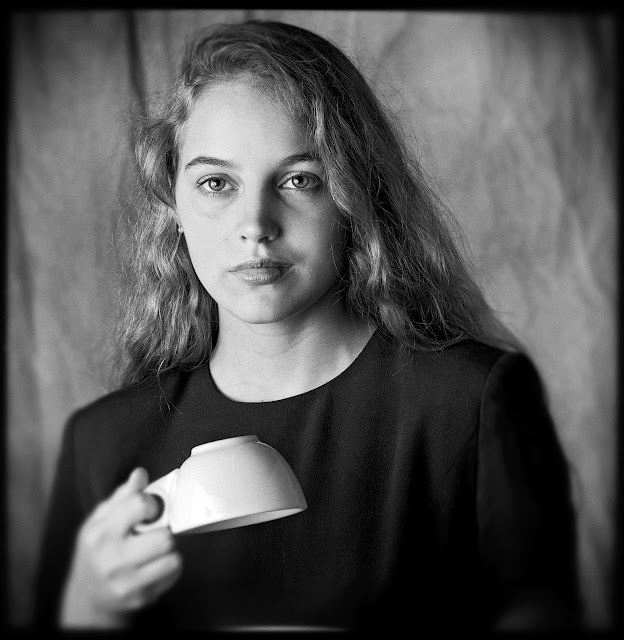 cup more than half empty?

We've been hearing this week that Nikon will layoff ten percent of their workforce in the next two to three years, through attrition and early retirement. The cause is the collapse of the camera market and their concentration of resources in two shrinking industry sectors. Why is this happening? What did Nikon get so wrong? And who's next?

First some predications: Nikon will not go out of business. Sales are down but they are no where near the point of hemorrhaging money like some dot com start up delivering cupcakes via Fedex. They still earn a profit. No one is rushing to buy Nikon (the company). Samsung put a hard stop on that kind of thinking when they wisely exited the camera market after studying the numbers. Photography is changing faster than most camera companies can imagine but most will catch up in one way or another. Finally, Nikon will likely continue to diversify just as (working) photographers have been doing over the last decade.

All camera sales are dropping even though there are bright spots chocked through the market. Nikon's drop seems the most dramatic, in part because they are one of the "big two" in terms of market share. So, what are they doing more wrong than everyone else? From my point of view (having surfed through most of the major systems on the market since the dawn of digital imaging) their biggest sin is a rigid clutching to their own recent history of making cameras. In the early years of digital just having a camera that worked reliably and also felt familiar (DSLR-like) to consumers was enough to allow a company to ride a heady wave of ever increasing sales, happening in ever shortening product cycles. Nikon strived to make cameras that looked and worked like decades of previous Nikon film cameras with the only change being a transition from film to ever improving image sensors.

This worked so well for so long that they now