Spent the day doing what I really like. Taking photographs and getting paid. 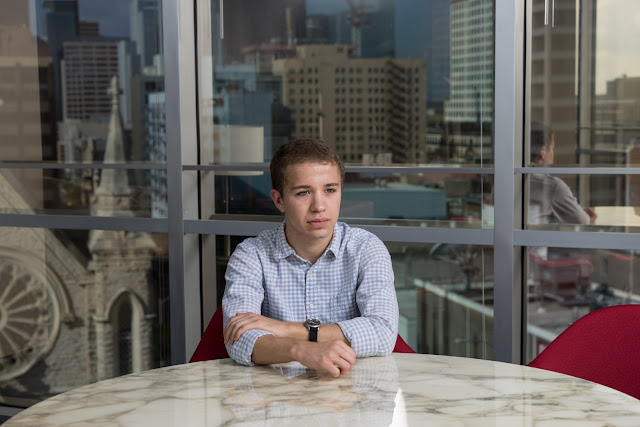 Ben. A test photograph from a shoot for the Texas State University System.
This past August, here in Austin, Texas.

It's fun when your job and your hobby are pretty much the same thing. I got up this morning, walked the dog, read the Wall Street Journal and the New York Times and then headed out to the studio to get packed for the first half day of a two-half-day shoot.

I'll explain. I was hired to go on location to one of the high rise buildings in downtown Austin, to make portraits of the 16 people who are the staff and partners of a development company. Since everyone has crazy schedules; especially this close to the holidays, I suggested that instead of one full day in one shot we might want to break up the day into two half days. If I came in around noon today to set up I could shoot from 1-5 pm and get all the "afternoon" people. I'd leave the gear set up overnight and then come back in at 9 am the next morning to finish up with all of the "morning" people. This would give everyone the opportunity to select a day that would be most convenient or a time that would be most convenient; depending on their nature. I like doing this because a full day gets boring and I think Studio Dog misses me when I am gone for that long.

We've pretty much given up shooting portraits against seamless for these kinds of shoot and are transitioning to a style that uses a mix of available light and supplemental light while shooting close to wide open on longer lenses. The optimum location is one where there is a lot of space behind the subject which I can progressively drop out of focus.

I packed up the car and headed downtown, arriving at the offices at noon and setting up by 1 pm. I found a long corridor with glass fronted offices along one side and windows to the outside on the other. I brought along three 100 watt LED open face fixtures to light with and two big 5-in-1 reflectors to modify the existing lights.

I started out by putting up a 40 inch black flag between the spot where my subjects would stand and the bad fluorescent ceiling fixture. This effectively kills the color mismatch that would have occurred on the subject between the warm, green fluorescent and the more neutral LED. I keyed the LED from one side and then brought a fill reflector in on the opposite side. The fill reflector also serves to kill side spill coming from other light fixtures on the location.

I used one 100 watt LED in a large soft box as my main light. I have my subjects standing and my technical goal with my main light is to place the bottom of the soft box at least an inch or two above the subject's chin level. This drops a flattering shadow under their chin which can help to obscure "turkey neck" and double chins. Fortunately, everyone in this office was in great shape and probably no more than five to ten pounds over their optimum BMI. Nice for me!

A second light, used in an 8 inch reflector, with barn doors, was used in the middle distance pointed away from the subject and towards the far wall. This would mix in the same temperature light as the key light and cut down on the rougher transition between the main light source and the prevailing office lighting.

The final light was used as a back light from as far back as I could get it and with the barn doors almost completely closed in order to control spill.

I used a 70-200mm f4.0 lens at f5.0 which gave me relatively good sharpness from nose to ears but dropped the middle and are distance objects out of focus quite quickly.

The pace was mellow and we were able to get eight people photographed today  with no stress or strain. In fact, I even had time to walk down the street to Medici Caffe and grab a great cappuccino and a walnut scone somewhere in the middle of the afternoon. We wrapped up today's shoot around 4:00 and by 4:30 I was home wandering around the neighborhood with Studio Dog.

Everyone gets in tomorrow around 8 am but I'll be there at 9. I rationalized it like this: I don't want to rush people. They need a chance to get into the office, get their coffee and respond to important calls and e-mails. An hour gives them time to get well settled. Another reason for my late arrival is my realization that with the later start I could make it to swim practice from 7-8:15 am, take my suit and tie along with me and make it downtown in ample time. Besides, the lighting is already set....

Which reminds me, I need to take a Siggi's 4% vanilla yogurt along with me for a quick, after swim snack.

One thing I've learned that I find to be really valuable for on location portraits (portraits in general?) is not to have your subjects sit in a chair but to have them stand behind a chair. A good chair back anchors them to the spot where your lighting is optimal and gives them something comfortable to do with their hands. Since we are shooting "head and shoulders" we don't see the chair or their hands. All we do see is a natural stance and a person more at ease than someone standing in the middle of open space wondering what to do with their hands.

So, I'll head back and we'll shoot the rest of the folks from 9-12 and then I'll break down the lights and cameras and head back to the office to offload the images, make my edits and begin the process of color correcting the edited files in order to make web galleries for each person.

And that is how I do location portraits at a more leisurely pace. It's fun. More like this...
Posted by Kirk, Photographer/Writer at 21:25 5 comments:

Putting my little camera in a cage. Caged 4K? Cagey? 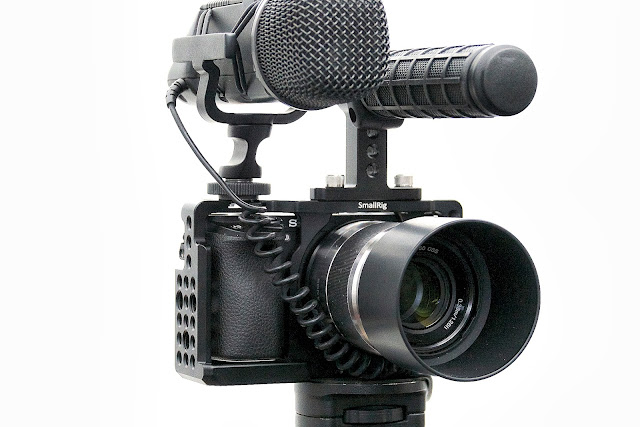 Most readers yawn when I start talking about stuff related to video but it's getting to be a bigger and bigger slice of my business so I'm forging onward. Today's blog is about a product I recently acquired that makes handling my a6300 more fun. The a6300 (Sony, APS-C) has great guts and a mediocre external camera/human interface. The body is too small, too short and lacks much space for adding the kinds of stuff that makes video easier. I wanted to make use of the fabulous 4K files from the camera but I favor a "snapshot" aesthetic for some work and that seems to be at odds with the small camera design. For instance, if you put a shotgun microphone in the hotshoe of the camera it pokes you in the middle of your forehead when you use the EVF.

I also find a handle, centered over the lens axis, to be a big plus when holding the camera below waist level. Something I find myself doing more and more when making videos for a client who manufactures legs prosthetics and joints. I just wanted a small "cage" that would add surface areas of cheese plate onto which I could hand accessories, without interfering with the overall operation of the camera.

Enter a company called, "SmallRig," which makes cages for various popular cameras. The base price of this (well made) rig is under $50. The handle adds about $25. My primary want was for a place to hang a microphone without interfering with the EVF. My second desire was for a nice handle. For about $75 I had both of those covered. I've also purchased an additional accessory shoe to I can attach a bigger, external monitor; if the spirit moves me.

The whole rig still keeps the basic profile of the system nice and small. All the controls as well as the battery/memory card compartment are fully usable without having to remove the cage from the camera. A bonus is that even in regular still photography shooting the extra "bulk" makes the camera easier for me to hold.

If the a6300 only had a headphone jack I would be more or less euphoric to use it, and the 18-105mm G lens, as an all around, run-and-gun system. But even without the headphone jack the camera is endlessly useful for anything that doesn't require sound. I am currently building a little rig to use it on a moving dolly for some "walking" shots for the above mentioned client. Shooting in 4K and editing on a 1080p timeline makes for pretty much perfect video files for this kind of work.

For interview work I am current considering one of two Sony dedicated video cameras: the PXW-x70 or the PXW-x150. If you have experiences with either of them I'd love to hear about it in the comments. If you already shoot video you are well aware of the convenience of on-board XLR connections, built-in ND filters and the (possibly) superior 10 bit, 4:2:2 codec. I'd love to hear your thoughts. 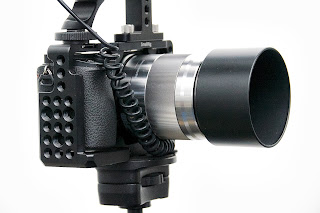 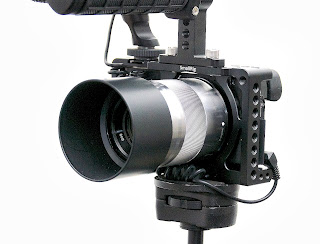 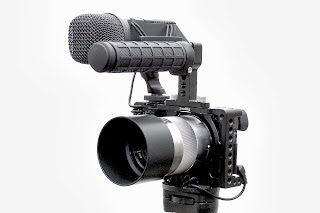 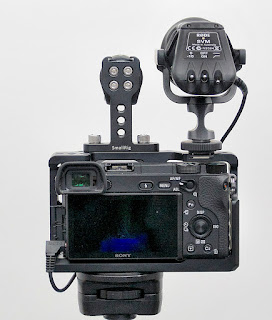 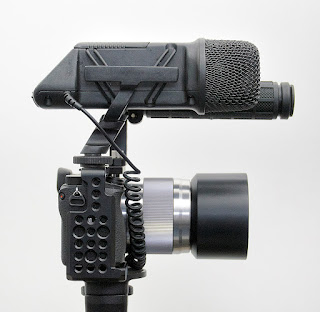 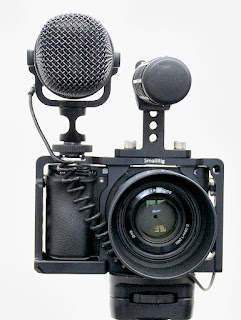 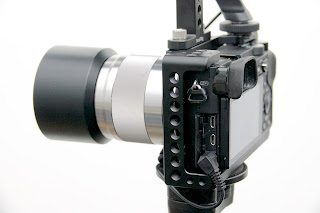 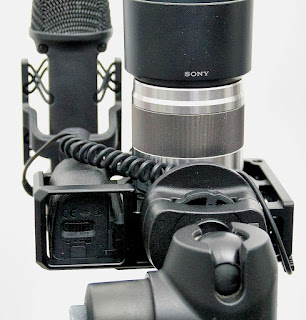 Posted by Kirk, Photographer/Writer at 09:55 10 comments: