A few more thoughts about super "bridge" cameras and why they make me smile. 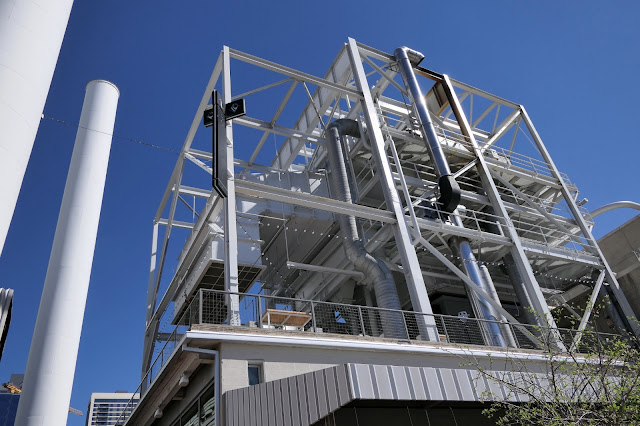 People are slow to adapt to change. They hold onto ideas that have lost their deep roots and reject innovation because it comes in a form that they don't recognize; or reject it because of anachronistic prejudice. It's kind of dangerous because change is accelerating at a rate that's so fast we can barely recognize what exists today and few can imagine the change and innovation that will happen by next year. Who, in 2005, would have imagined that Nikon and Canon's biggest challenge
Read more »
Posted by Kirk Tuck, Photographer/Writer at 21:22 13 comments:

A funny thing happened in the kitchen on my way to my next photo assignment. 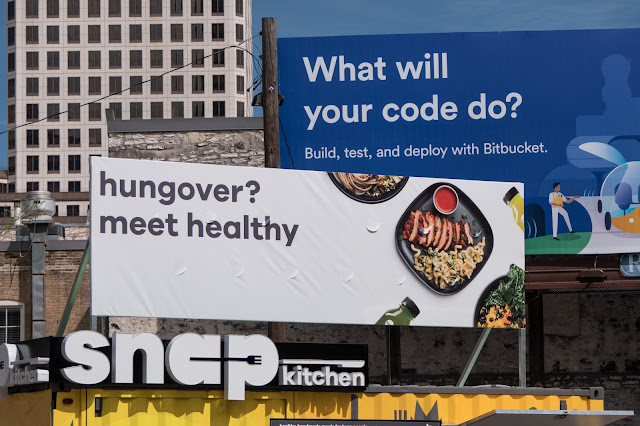 We had a nice photo assignment booked for today. One of my healthcare clients sent me a box full of products last week and we'd made arrangements to meet at my place at 9:00 am this morning to start shooting 25 thingies on white backgrounds.

Here's what I do when a day long assignment like this comes up: After we confirm the day, and get a good idea of what we're going to shoot, I dive into how I'm going to shoot. None of the products move and none of the products needed to be shown on live models so I knew I'd be safe lighting everything with LED lights. I also knew that we'd be shooting with a longer focal length and not with wide angles so after figuring out the distance of the object to the background, as well as the maximum object size I knew I could shoot everything with a 50 inch wide, white seamless paper backdrop in the background and I built out from there.

Here's the tricky part of the shoot: The products are generally black. They are things like back braces and neck braces and things that are generally worn by patients recovering from things like accidents and back surgeries. So, all of the objects are either black or gray and black. The clients has a style established and it consists of shooting these products on shiny, white, featureless mannequins. So, deep black products on shiny white mannequins against white backgrounds. Got it.

To evenly light the background I used two Aputure LightStorm LS-1/2 lights, set in vertical orientations, to either side. I used them far enough from the background to give me an even wash of light and used barn doors made of BlackWrap (tm) to block any direct light from hitting my subject. A quick incident meter reading let me know that if I wanted f11 @ 1/4 second, ISO 100 on my main subject I would need to dial the background lights down to 60% each. The LS-1/2s are controllable from 10% 5o 100% in single digit increments so no problem there.

I lit my main subject (the mannequin with the product applied) with two LightStorm LS-1S lights shining through diffusion material on Chimera 48 inch ENG panels. The panels were set 45 degrees to each side and fairly close (about two and a half feet from the subject). This allowed me to move the actual lighting instruments back to make the light spread on the panels more even across the surface. When I wanted one light to take precedence in the lighting scheme I could bring that light in closer, creating a bright spot in the center of the panel fabric which made the light brighter overall and contrastier (since the size of the light relative to the subject becomes smaller). This gave me more control and quicker control that I would have had using an umbrella or soft box.

Finally, I used a small Aputure Amaran portable light panel just in front and below the camera position to provide fill into specific areas. This worked to help me control small shadows adjacent to the products without having to increase the overall illumination.

I used a Sony A7Rii on a very big Benro tripod for the photographs. I used it in its full on raw mode; 42 megapixels of uncompressed pixel happiness. This might seem to be overkill for a photograph destined for a catalogue or a small inset image in a brochure but the extra resolution and detail comes in handy when one is making finicky clipping paths.

I used the trusty and sharp, 70-200mm f4 G series zoom lens for nearly every shot. Its well controlled flare characteristics and high overall sharpness make it a perfect choice when you don't need a lot of close-in magnification or wide angle coverage. Every Sony shooter should consider this lens as part of their toolkit. Boring but close to perfect.

There were several shots that needed to be made with much higher magnification and in these cases I used the Rokinon 100mm f2.8 macro lens. On one shot which needed deep depth of field I stopped down to f16.5 and, on 100% examination, was pleased with the results!

I had three guests in the studio for the duration of the shoot. One was the product manager, one was the graphic designer for the company and the third was the advertising and marketing coordinator.

When I have guests in the studio I always make an effort to keep them happily hydrated and fed. We offered them five different kinds of energy bars, whole wheat croissants with the option of adding peanut butter and blueberry preserves, fresh apples and bananas as well as yogurt. Hell, if someone had come really hungry I would gladly have fired up the range and made them a pan of migas. Or huevos rancheros.

We have a big Keurig on the counter and lots of coffee brands to choose from. Sparkling water, sparking water with lime, and still water.

We have a guest share for the Wi-Fi network as well. It's great to work at the home base because I have all the tools and modifiers I'd ever want immediately at hand and, when we hit a spot where styling takes time, I can head into the house and check on Studio Dog.

But every once in a while the photo gods love to toss a wrench in the works. Just before hitting the rack last night I was washing some pots and pans in the kitchen and the sink began to back up. Wouldn't drain! I tried a plunger and boiling water and finally (grumbling) pulled on my shoes and headed to the grocery store to buy a bottle of Liquid Plumber. I followed the instructions and.....still no joy.

I let everything sit until this morning. I guess I was expecting that time and the Liquid Plumber would do the trick, if I was patient. I headed to the kitchen and the sink had drained. I tried running some water before turning on the dishwasher and creating a catastrophic emergency (you can see how tough life can be for us photographers....)

Still no joy as the sink filled up again and refused to drain.

Didn't much matter in the long run. We shot photographs. We made coffee. We ate croissants. We shot more photographs. The only thing different is that instead of rinsing coffee cups as we went along I had to round them all up after the shoot.

One thing I should mention that really helps in studio still life shoots is the use of a monitor tethered to the camera. I hate tethering to laptops or desktops. I want the screen close to the camera and moveable. I used a clamp on the tripod leg to hold a small (7 inch ) monitor a couple of inches to the left of the camera. This gave the product manager and graphic designer constant access to either the preview of the shot or a review of the shot. It made for an efficient feedback chain. I loved having the live histogram and all of the camera info right there on a bigger screen.

When we finished the shoot it was about 1:30pm. No one wanted to go back to work so we headed over to my favorite Chinese restaurant for a late lunch. Never a better time to get to know your clients better than over lunch.

When I got back home Studio Dog was waiting by the door and helped me decide which plumbing company to call. She must know her stuff because we had a plumber here in less than an hour and the sink is righteous once more. Old cast iron pipes. Some oxidation. Some clog somewhere.

Now everything is once more right with the world and it's time to download those files and to sit down and start working on clipping paths. I've spent too much time thinking about the kitchen for the last 24 hours. I think that means Belinda and I should head out to dinner tonight. Gotta be able to read the signs. 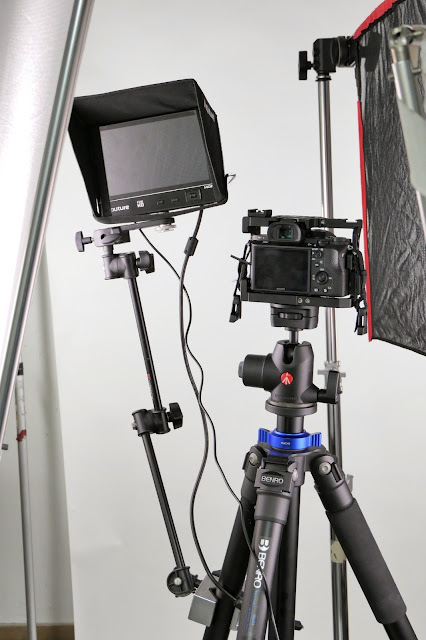 The monitor is now pretty much mandatory for shoots where art directors or product managers are attending. The ability to share images without slowing down the shoot is good. It's quicker and easier to use an HDMI monitor, originally purchased for video production, than to go the fully tethered route. A benefit beyond good seeing and sharing is that running the monitor shuts off the screens in the camera and vastly increases the run time for the camera batteries. Important for some stuff. Very useful when doing long form video. 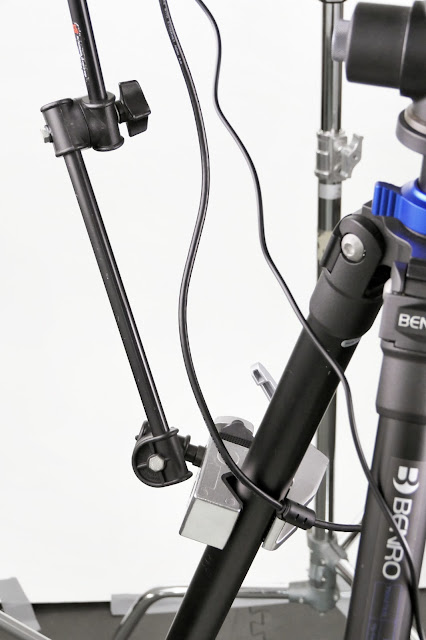 Nothing fancy here. Just a Super Clamp attached to one of the tripod legs, anchoring an arm that allows me to position the monitor where I can get the most use out of it. We get much use out of Super Clamps and Grip Heads. Everybody should have a bag full. (We don't sell them...). 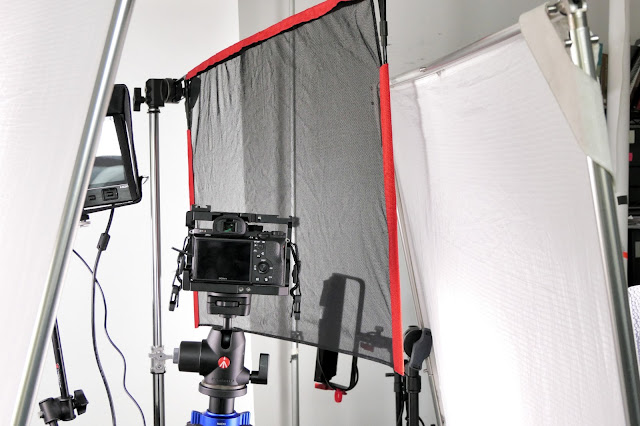 I use "nets" for lighting control. Nothing's better than pulling unwanted light off a subject without introducing hard edged shadows, etc. I used this net to pull light off the shoulder of the shiny, white mannequin we had in the studio earlier in the day. It's not in its "working position" for this photo... 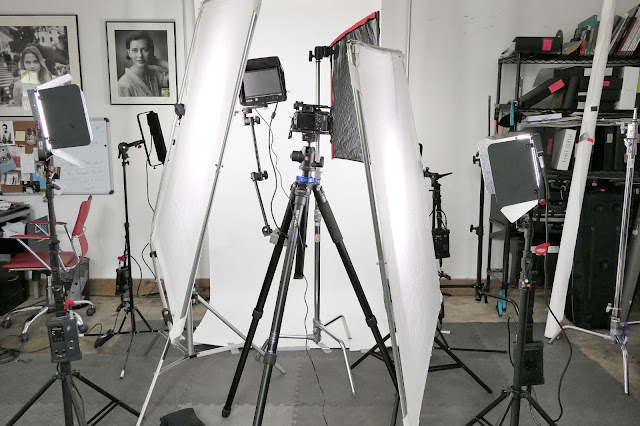 While I am happy to work on various locations nothing really beats working at home base. My 600 square foot studio/office is about ten steps from the front door of our house; which makes the daily commute very manageable. It's fun to be able to reach into a bag and grab three or four extension cords. Reach into another bag for an assortment of microphones. Turn around and grab five or six different rolls of tape off a shelf. Etc.  It's also convenient to be able to walk into the house and check on Studio Dog. She always appreciates a visit and some time outside. 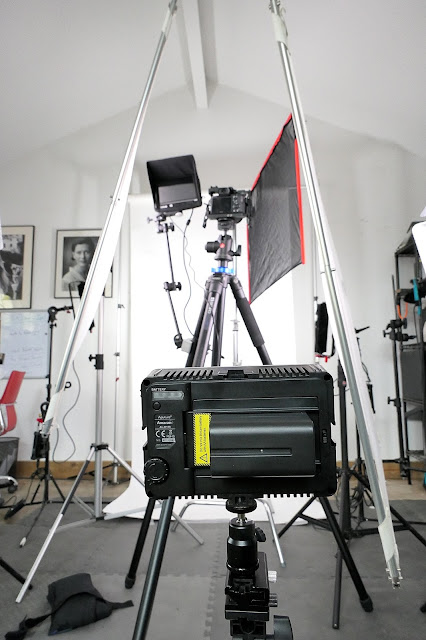 Above is an itty-bitty Aputure Amaran LED light. Amazingly, it matches the color spectrum of my much more expensive lights. It's great to be able to grab a little, battery powered light and reduce a shadow in a single spot --- instead of having to make more "global" corrections. 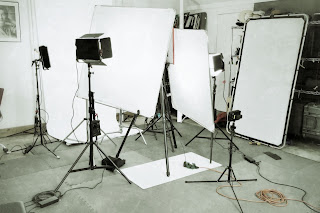