A quick observation, or two, about using older lenses on newer camera bodies. Like the Panasonic GH5. 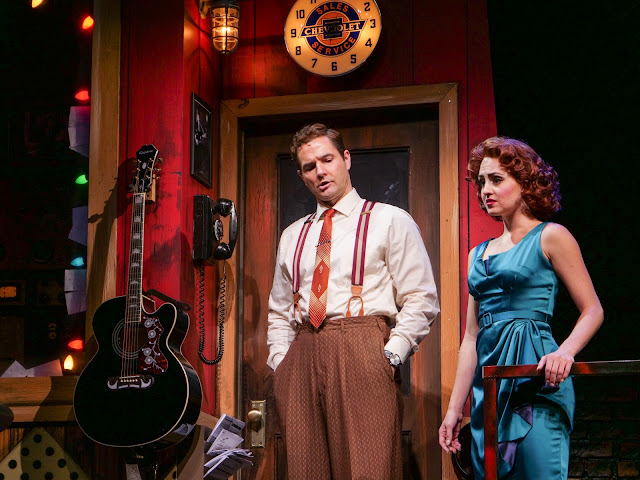 It was a super hot Sunday night and I took refuge in the chilly air conditioning at Zach Theatre's Topfer Theatre. I was just in time for the technical rehearsal for "Million Dollar Quartet" and I had a strange combination of cameras and lenses in my little Husky tool bag. It was early days for me with the GH5 but I thought I'd push it around for a while and see if we gelled or if I'd made yet another acquisition error. I would have loved to have shot the show with the Olympus 12-100mm f4.0 but it wasn't on my radar yet. I went with the ancient 60mm f1.5 from my Olympus Pen collection instead.

The image above is one of hundreds I made during the course of the rehearsal. This one was shot down at 1/60th of second at f2.8 with an ISO of 400.

There are a number of things I like about using the GH5 with older lenses like this one. First, the camera allows you to program in the exact focal length of the lens you are using, down to the millimeter. Most cameras have a list of possible focal lengths you can program in and usually they are about 5mm apart. Or they are common focal lengths. This tells the camera how to use image stabilization correctly for the focal length. I'm not sure that it makes a real difference but if you are picky it's nice to be able to select 25mm instead of 24mm if 25mm is the actual focal length.

In my limited experience, with older legacy lenses programmed in like this, the camera does a good job with stabilization.

The second thing that's nice for shooters of older, manual focus lenses is the focus peaking. After looking through a lot of frames I've found very few from the evening's shoot where I missed focus. When I first wrote about the focus peaking performance I gave the G85 higher marks because the frames looked better, in review, on the screen on the back of the camera. I gave credit to a better implementation of focus peaking. But after spending time with the files from the GH5 I found that they images were sharper when inspected on my computer monitor. Apparently, and I have duplicated this in camera, the initial write to the card generates a lower res review file but the actual file is almost always sharper. I think the camera is set up this way in order to optimize for speed of capture. Reviewing on the fly is always fraught with peril anyway.

I don't think the camera, in Jpeg, is writing 1:1 review files. There is no advantage to reviewing files at the 16X magnification on the rear screen over reviewing the same files at 8X. That tells me that 8x is the maximum resolution of the review image and going to 16X just shows you the same pixels larger; which looks less sharp. It's one of the many small things that take experimenting and getting used to working with a new camera. A kneejerk reaction would be: "Is the GH5 less sharp?!!" But it would not be an accurate assessment of the actual files.

Another observation is how much better an exposure tool zebras can be than judging a scene in the finder, by eye, or using a histogram. I've started setting my zebras at 75% because that's the point at which most caucasian skin starts to overexpose. If I have a caucasian actor in front of the camera and I'm trying to accurately set exposure I want to be able to ignore the effects of direct stage lights shining into the lens and brighter areas in the scene and just see how my exposure setting relates to correct skin exposure. I shift exposure until I start getting zebra stripes on a face and then back off until the just go away and I know I'm in a great exposure zone for the important subjects on stage. It's a great way to narrow in on getting the exposure right on the subject that you choose. This isn't particular to manual focusing lenses only; it works with all lenses.

I'm coming to grips with more and more features of the camera and as I learn what works well I try to adapt it to my working methodologies. I'll probably put the zebra control on the function button next to the lens because it's nice to be able to toggle it on and off. After I've set an exposure the zebras can be annoying. You can set two different custom zebra settings in the GH5 and toggle between them. It's a really nice way to "meter."
Posted by Kirk, Photographer/Writer at 17:15 2 comments: