I like the idea that imperfections help make an artwork more accessible. I translate this to mean that portraits which are over-styled will never be as satisfying as portraits that are a reflection of the moment. 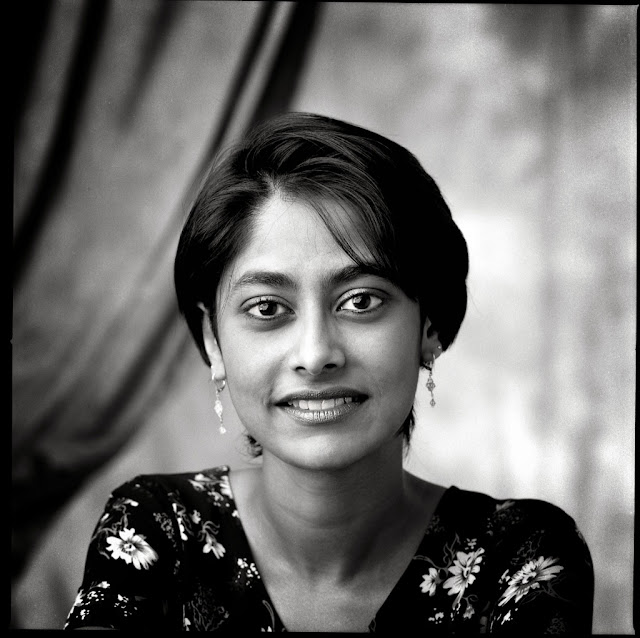 Usually I crop a bit tighter to the top of the frame. My first thought is that I've left too much head room in this portrait of my friend, M. But when I try to crop it I lose the square and too much of the wonderful and energetic background. I see the wisp of hair that's come away from the well tended majority and created its own extra diagonal just over M's left eye. Common practice would be to have a stylist rush in an cement that errant wisp back into the fold. But the "imperfection" makes the portrait more real for me. And to stop the process of interaction we had embarked upon in order to maintain order seemed like a bad gamble as well as a nod toward too much compulsive neatness.

The common practice now seems to be a push to strike a "sexy" pose when young women are photographed. I like seeing M. look into the camera in a strong and confident way. Style dictates a slight turn of the body so one doesn't photograph squared shoulders but, again, I think the shoulders balance the image in a way that adds a graphic element often missing in portraits.

Finally, I understand that I've (unintentionally?) centered the image around M's eyes. I have no explanation or excuse other than the idea that this was a reflex on my part because I found her eyes to be so compelling.

It's a portrait replete with "errors." It is a portrait of a beautiful person. The errors make the whole of the work more accessible to me.

Just how much lighting does an image need to make it work? 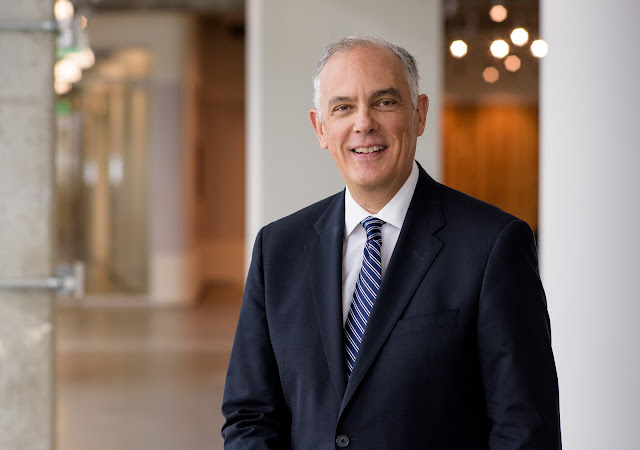 This is a portrait of Mark Agro. Mark is the president of Ottobock Canada, a health care device company. Several years ago he was in Austin, Texas for a week long meeting and we were called on to make a portrait of him for use in advertising and on the web. We had at our disposal the new U.S. headquarters of the same international company. It's a beautiful office on the sixth floor of a new building at the Domain Center in north Austin.

One of the features of the building that every portrait photographer would enjoy is the floor to ceiling windows along one entire side of the building, facing north. The light coming through the windows is soft and gorgeous. The interior of the building provides a lot of architectural stuff that looks good thrown out of focus.

I set up one, big soft light directly above and behind my camera position to provide an almost invisible fill light. I used a 60 inch, white umbrella and a small, Yongnuo strobe to provide the illumination.

The flash was set at  something like 1/16th power and was about 15 feet from Mark. While the web is filled with forced examples of people using very expensive strobe kits to do the same kind of lighting an expense of $58 for the strobe is really all that was needed. If I remember correctly the umbrella cost a few dollars more than the light source.

It's easy to read too much stuff from people who are directly or tangentially linked to strobe or camera manufacturers and come away with the idea that certain pieces of expensive gear or complex techniques are mandatory for professional work but the truth is that knowing where to put a light is much more mission critical than which particular light you might select. The same applies to cameras and lenses.

The portrait was successful. It is one of my modern favorites and it led to dozens more executives being photographed in pretty much the same spot with similar variations of the same lighting. It was additionally successful in that I got to meet Mark and share a pleasant conversation which ultimately led to a very nice friendship.

In an earlier segment of my career I would have shown up with a bunch of Profoto lighting gear, run cords all over the place, and probably butchered the wonderful natural light that was freely available. I would have been so fixed on technically based solutions that my honest rapport and easy conversation with Mark might never have happened. So, how much lighting should you use to make portraits? The absolute minimum you need is just about right....
Posted by Kirk, Photographer/Writer at 11:06 1 comment:

Just how out of focus does every background need to be? 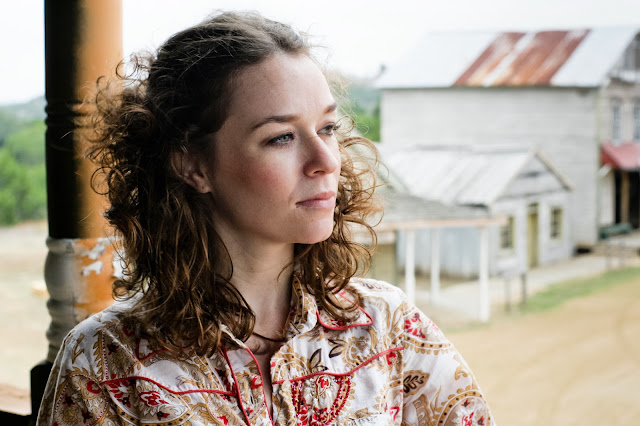 We photographed this image of Selena at Willy Nelson's small Texas town (he's moved a bunch of cool, old, Texas buildings to a ranch somewhere outside of Austin (NDA signed....). It's a popular location for period movies about Texas. Selena had a band called, "Rosie and the Ramblers" and she needed some publicity shots. And there we were.

At the time I was playing around with some Canon 1D mk3 cameras and a complement of Canon glass and I could have easily used a wide open aperture to make all the details in the background nothing more than a blurry wash of colors. It would have been in keeping with the prevailing compulsion among photographers to make everything into a bokeh experiment. But, practical person that I am I assumed that we get permission and travel out to a cool, private ranch just to blur the background into anonymity so I stopped the lens down a bit until I got a balance between emphasis on Selena's face and some descriptive texture in the background.

There's also a bit of flash being used to make the photo but I tried to make that as invisible as possible.

Could I have done the same shot with a m4:3 sensor camera? You bet. Could I have done it with a full frame camera? Yes, of course. The idea though is that neither format would have been demonstrably "better." Each would have resolved the detail we needed for every application we intended for the files. Each could be color corrected into the right box. We just had to decide what was important in the overall look and select the controls that would make the image happen the way we wanted it to.

It was a windy day and that was something we could not control. Saved us from having to rent a wind machine to blow Selena's hair around...
Posted by Kirk, Photographer/Writer at 10:45 5 comments: