A good portrait is almost always a collaboration. If you don't play well with others consider landscapes or products. 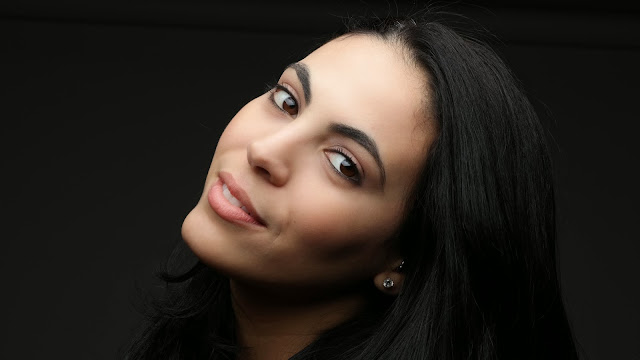 The one thing I regret about the demise of the Samsung camera division was the discontinuation of a particular lens. They made an 85mm f1.4 that was one of the finest portrait lenses I ever used. We shot the image above in a tiny trade show booth at the 2013 Photo Expo in NYC. Even though we were surrounded by crowds and the noise in the exhibit hall was crazy loud we were able to achieve moments where my model and I felt as though we were the only ones in the room.

It's about a connection. The connection can be one of shared purpose, a physical or psychological attraction or a shared interest. Some how both sitter and photographer must bridge the gap between each other and enter into the moment with a sense of play....and give and take.

If you don't get some sort of spark or connection that goes in both directions you haven't made a portrait, at best you've made a document...
Posted by Kirk, Photographer/Writer at 22:17 6 comments:

One of my last assignments with a 4x5 view camera. Elgin, Texas. 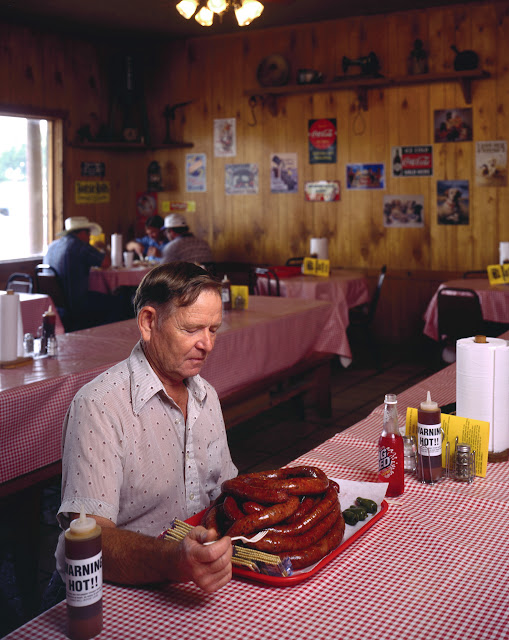 Texas Highways Magazine is the chamber of commerce publication of Texas. They have sent photographers to the corners of this huge state, and just about everywhere in between, to photograph the weird, the traditional and the ultra-normal. I did a couple of jobs for them in the early part of this century and had a great time. The first project they tapped me for was to photograph in Elgin, Texas. The digital photography age was just getting fired up, six megapixel cameras were the only affordable option and film was not yet dead.

I've often sung the praises of our all terrain film format, the 6x6 cm square medium format, but I really haven't written much about the 4x5 view cameras that constituted "platinum level" imaging from the early 1950's all the way up until the creation of true 12 megapixel cameras and the final substitution of the web for printed magazines.

My first view cameras was a Calumet model which was one of the budget cameras available in 1980. I bought one along with 24 film holders and three lenses; a 90mm f8.0, a 135mm f5.6 Schneider Symmar and a 210mm f5.6 Schneider Symmar. And then there was the associated hardware with which to make it usable: a dark cloth to provide a dark space in which to view the (usually dim) ground glass on the back of the camera, and a cable release to trigger the shutter. Oh, yes, and a Polaroid back for shooting Polaroid test materials.

By the time of the Elgin assignment I'd being shooting at least weekly (and for some few years, daily) with the larger format camera. My first portrait for the founder of Texas Monthly Magazine (Mike Levy) was done on that old Calumet camera. All my architectural shots and many of the product shots right up until 2002 were done with it as well.

By the time I hit the streets of Elgin I had upgraded cameras to a Linhof Technica and while I was still using the same two longer lenses I'd replaced the older 90mm with a much better 90mm f5.6 Super Angulon. Sweet glass, for sure.

I think the art director would have been just fine with me shooting on medium format film, or even, with great care, the new digital DSLR cameras but for some crazy reason I insisted on using the older, bigger tech for the Elgin assignment. With 24 film holders I could pre-load 48 sheets of color transparency film (one on each side of the film holder) and be ready for a good day of shooting. Generally, when I hit the 48th frame that was a sign that it was time to go home for the day. I did carry along a changing bag that would allow me to offload shot film and reload my holders on location but we always worried about dust and debris from the inside of the changing back ending up on the film.

I was working with the writer's submitted story draft so I knew which places would end up in the article. How I photographed them was left up to me since the art directors never traveled with us or gave us suggestions in the field.

Elgin had two big industries back then (2002), one was sausage making/BBQ selling and the other was a giant brick manufacturing plant. We shot both industries. The brick making was interesting but the BBQ was delicious.

Both these images were done on BBQ locations and I used an electronic flash to get them. Both were done with the 135mm lens which was more or less analogous to a 28mm to 35mm focal length on a 35mm "full frame???" camera. I'd get to a location, get a mini-tour from the owners or managers and then brainstorm a shot. In the top shot we had been discussing the fact that some customers had a daily BBQ habit. They'd come in and eat sausage or brisket or ribs every single day of the week. I thought it would be fun to set up a shot about "excess" and an Elgin citizen was game to play along with me.

One figured out the basic angle and coverage of the image to be photographed long before one pulled the large format camera out of the case. You created the shot in your mind and then you constructed it. After years (decades) of working with the larger format I got to the point where I could get it set up and ready faster than most people can find something on an Olympus digital camera menu these days.

I'd set up and rough the shot in and then toss the dark cloth over my head, and the back of the camera, and fine tune the composition. Then I'd grab the loupe hanging around my neck, stop down to the taking aperture on the lens and check the fine focus. It was always a challenge to hit focus and one of the primary reasons most pros bought electronic flashes with power modeling lights. You really needed the extra lumens to see the point of exact focus!

One of the nicest things about the larger format images, beyond the endless detail and endless dynamic range, was the ability to quickly get the overall perspective correct. Make the front and rear standards parallel to the walls of the location and then use the camera's rising and falling front standard to get the composition back. We've got tilt and shift lenses now but people seem to have relegated them only to "architectural" work. The camera movements were used so much more frequently in the days when knowledge ruled and "easy" was a pejorative.

A few test flashes, a meter reading or two, and then confirmation via Polaroid and we'd be off and shooting. We went overboard on the top image and shot FIVE frames. Total indulgence.

The frame below was done on the same day at an establishment across (the small) town. I'd been shown the sausage factory and found this guy hoisting a tub of sausage. He was perfect. So was the sausage. I had the Linhof out and the 135mm in action in minutes. The light was actually done on this location with a Vivitar 283 flash into an ancient and tattered, white umbrella. The whole set up and shoot took ten minutes and I was satisfied using three frames of film. You paid attention back then. It was a thing.

The sparse shooting made editing much easier. I'd look through the day's take after the lab processed it, curse myself if I forgot to make adjustments for bellows extension, or reciprocity failure, and then chose the single best shot for each set up. One frame of large sheet film per encounter, and that's what I would hand in to the art director.

Knowing it was going to be my last, sentimental working journey with the larger format I blew through nearly 120 sheets of film over three full working days. We had about 95 keepers. I turned in 30 shots. From brick making, sausage making, antique shops, bed and breakfasts and a bunch of historic building shots, the 4x5 was fluid and effective at every step. My final shot was a veteran at the town's only donut and coffee shop. He was seated at a table with an American flag behind him. It was a nice shot. I wish I could still find it but I have a sneaking suspicion that it never came back from the magazine.

That's one of the few blessings of using digital, you always have a copy of everything you've shot. Unless a hard drive goes suicidal and eats everything.  On the other hand we never had the drudgery or paranoia of having to do back-ups with film. You either had it or you didn't.... 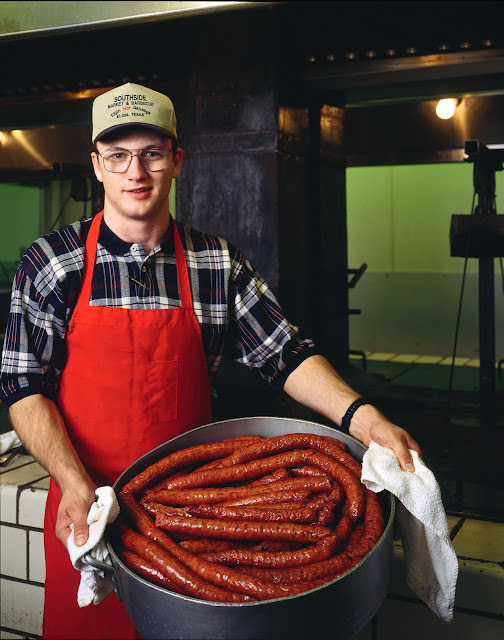 Posted by Kirk, Photographer/Writer at 18:38 14 comments: