I haven't spent enough time talking about the FujiFilm X-E3. I can fix that.... 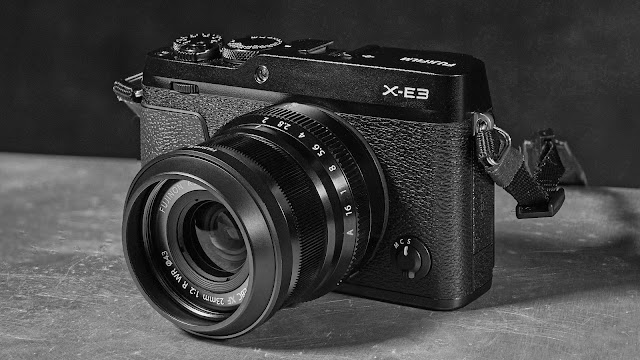 It's been a while since I owned a "point and shoot" camera. For the last year and a few months my smallest camera has been a Panasonic GH5 and most people would not consider that to be a pocketable, diminutive, minimalist camera; even with small lenses attached. But since my initial seduction into the FujiFilm product universe I've been looking past the standout, new cameras and checking out the camera bodies Fuji offers to see what I might like.

I bought the Fuji X-T3 on a whim but I've been pretty surprised at just how great that camera is as an all around, professional tool. I've taken it out into snow, sleet and rain in the little time I've owned it and shot under all kinds of lighting conditions only to find both its Jpeg files and Raw files to be wonderfully color accurate and to have very pleasing tonality with no glitches or stumbles from hard use. Anyone entertaining the idea that Fuji files deliver "pleasing color" at the expense of accuracy ought to visit the PDN tests of color accuracy, where cameras are tested with objective metrics and then ranked according to how color accurate they are. The top camera (tested) at the moment? Oh, yes, that would be the X-T3. See the test results here.

And tied for second place? Oh, yes, that would be the Fuji X-E3. I didn't know about the color accuracy scores when I bought the X-T3 or the X-E3, I only knew that I really liked working with my first, modern Fuji camera enough to want to take it with me on assignments out of town and that to do so I'd need to grab a good back up camera from the same family. The camera that fit my budget at the time was the X-E3. Fuji closed the deal by having a price drop, and it didn't hurt that both cameras took the same battery. While I would like all batteries to have stellar endurance having all models use the same battery model is always better than beefier batteries which almost proprietary to each camera model in a maker's line-up.

I didn't do much research about the X-E3 but I did know that it shares the same sense as the X-T2, that it's a 24 megapixel X-trans sensor, and that most reviewers gushed about the image quality and high ISO noise handling characteristics of the sensor in other cameras in the family. I read a few reviews and then walked into the local store and splashed cash for one. It did exactly what I needed it to do on the last legs of my big assignment, which I'm now calling "The Endless Flights to Flyover Country." It fit in the gear case, taking up minimal space and adding very little additional weight. It hovered just in reach should my main camera become overwhelmed and quit working. And it came back home safely. It fits into that mental space, thinking of a camera as both a "point and shoot" because of its size and weight but also as a proficient back up for pricier cameras.

To get right to the point, the X-E3 is capable of making superb images as its sensor yields very accurate colors, very nice and easy to work with tonalities, ample dynamic range and good white balance. It focuses relatively quickly and when used with the trinity of reasonable f2.0 aperture primes from Fuji it makes a dandy, modern analogy of shooting back in the 1980's with a Leica rangefinder and a 35mm, 50mm and 90mm set of Summicron lenses (although the longest one of the three in the Fuji set is, at 50mm, just the equivalent of a 75mm and not a 90mm (sad for me)).

You can put any Fuji X lens on this camera and be reasonably assured that the output will be identical to that of any other current  X camera. Perhaps the X-T3 has a few different processor advantages but, as I always point out, the advantages are rarely as discernible as the manufacturers and some click-happy reviewers would have you believe. There are situations in which you will be better served, ergonomically, by a bigger and more traditional styled body, such as the X-T2 or X-T3, or, even the X-H1. These situations become obvious when you start using bigger and heavier lenses on the X-E3. It's a small body and not heavy at all. It balances gracefully with the three smaller primes I talked about above but much less so with bigger and heavier zoom lenses. I find it awkward to use with something like the 55-200mm lens and even the 16-55mm f2.8 lens dwarfs the body such that you end up holding the assemblage by the lens instead of depending on the body's almost non-existent grip.

After getting spoiled with direct, analog controls for all the major parameters I most frequently change on the T3 (shutter speed, aperture, and ISO) I resented having to go into the "Q" menu or even the regular menu in order to quickly change the ISO setting. But I am thankful for the exposure compensation dial which resides on the top plate of the camera and is easy to use (but which went missing on the X-H1...).  While I'm being cantankerous I'll go ahead and complain about the smaller, fiddlier buttons...

If you love flippy screens or even flip-uppy screens you'll dislike the X-E3 as its rear screen is fixed into the body and does not move. By the same token, the EVF, while good and information rich, is not particularly comfortable for eyeglass wearers. Not enough optical relief. But I'm finding that these two things are more preferences ingrained from using different cameras. If this was my lone camera I think I would easily become comfortable with the screen and EVF in short order.

The camera has nearly all of the good, settable color profiles you'll find on the X-H1 and X-T3, including the Acros black and white settings and lacks only the "Eterna" setting which is a flatter and less saturated profile mostly intended for video footage that you might need to deliver quickly, and straight out of camera, without having to color grade. In fact though, the eterna profile can be a beautiful profile to use for portraits.

So, what you have is very much akin to the original Leica CL from the 1970's: A small, light and nicely designed camera body that can be a bit awkward to hold for long periods of time and which has a smaller EVF eyepiece than the bigger cameras in the system. It's a small camera that works best with smaller zooms (18-55?) and comes into its own with the three small, f2.0 prime lenses (23, 35,50) that Fuji offers. It's the perfect companion for long walks, and tight packing in situations where you are still trying to get within 95% of the quality levels of the best full frame and APS-C crop cameras on the market.

The video is not earthshattering but if your main requirements are good, clean 1080p video it does a decent job with the visual side of the files. There is no headphone jack and so no way to monitor audio even though there is a microphone jack. But why the microphone jack uses a 2.5mm size instead of the much more standard 3.5mm industry default is beyond me. I guess I'd buy adapters if I thought I'd use the camera much for video. But I have other tools for video production...

One thing you have to be okay with if you think you are in the market for this camera is the fact that there's no built-in image stabilization. You have to depend on the stabilization in various lenses. I like to use this camera body with one of the three primes I mentioned and none of them have I.S. either so you're either okay with that or you need to look at a different camera. The only interchangeable lens camera in the Fuji system right now with built-in image stabilization is the X-H1 but I consider that more of a heavy duty pro "banger" camera and less of a discreet, demure and beautiful street shooter....

After I used the X-E3 for a while as my back up and second camera I added an X-H1 body to gain the option for (worked related) image stabilization. But a walk on Christmas Eve down and around the Barton Springs fresh water pool re-convinced me that the kind of photography I do with cameras like the X-E3 can be done just fine without that feature. Image stabilization is nice to have and does improve some images but it's nice to know I can still handhold a camera without that particular set of training wheels.

So, to sum up. A small, light and beautifully designed camera that easily fits into the niche for which I used to use "point and shoot" cameras, like the Canon G10, and for which many other people use the Sony RX100 series.  A near state-of-the-art imaging sensor with a competent imaging pipeline. Access to some of the best lenses in the business. A fairly quiet shutter. Lots of really well thought out color profiles and a form factor that helps (with smaller lenses) create a discreet and almost all purpose photography machine.

The detractions: smaller buttons, fewer direct/dedicated physical controls, an EVF that's less pleasant to use for wearers of eyeglasses, and a camera body that's not a great match for heavier and bigger lenses. For me, it's the perfect backup camera for locations shoots where an X-T3 or X-H1 are the star cameras. It's also the perfect primary camera for personal shooting/street shooting art photography when paired with the trinity of f2.0 prime lenses that Fuji has designed to be small, fast, weather resistant and nicely sharp.

I'm happy with the camera when used within the right parameters. So happy, in fact, that I also bought a Fuji X-E2 as a back up for the X-E3 for those times when I want to go completely minimal but still have an extra body lurking in some crevice of my suitcase; just in case. YMMV. 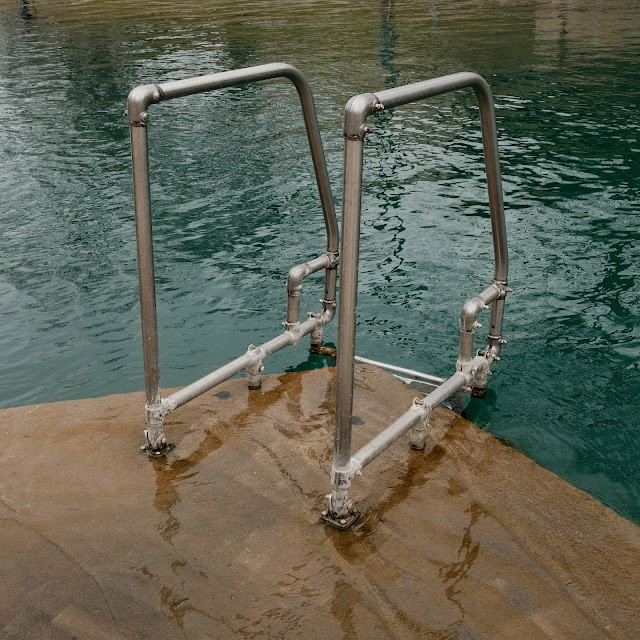 Barton Springs Pool is a bit more than 1/8th of a mile long and is constantly refreshed by clean spring water from deep below the Hill Country. Since the water comes from underground it stays a pretty constant temperature = about 70 degrees, Fahrenheit. There are no chlorine or chemicals in the water so if you swim laps there you aren't likely to get the itchy skin and dry, bleached hair you get from an over managed YMCA or country club pool. The facility opens to the public at 5 a.m. most mornings and stays open until 9 p.m. In the Summer the pool gets large crowds but in this period between Christmas and New Years you can show up anytime, swim some laps and not bump into anyone. It's really nice. Perfect time for swimmers who are also loners....

Recently I've become interested in all the different ladder rails used for getting in and out of the pool. Maybe I should make a book. A very, very short book. At any rate these were photographed on Christmas Eve morning. I was out for a walk and enjoying the calmness and quiet of the center of the city at a time when everyone else seemed to be scurrying to the malls or headed out to parties or to see family. The hike and bike trails were relatively vacant and the pool was host to two swimmers while I was there. A great way to get ready for the holidays. 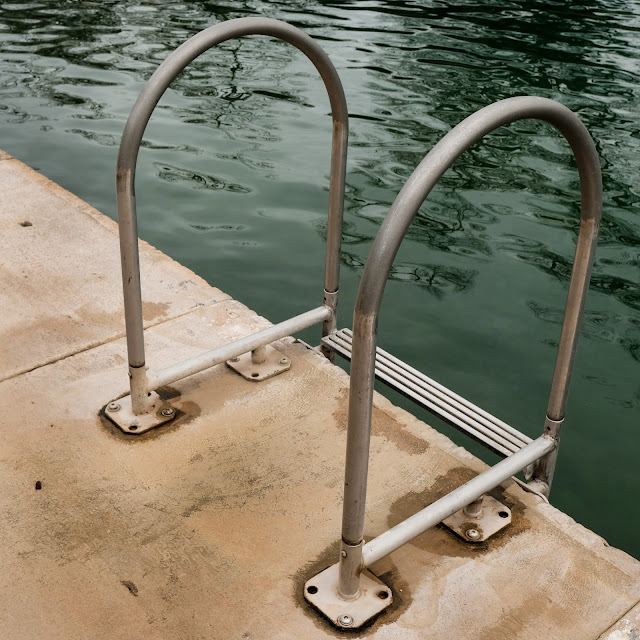 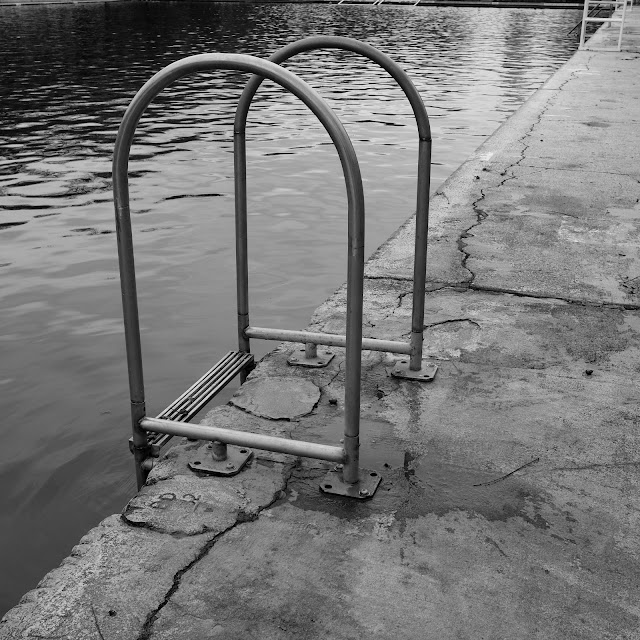 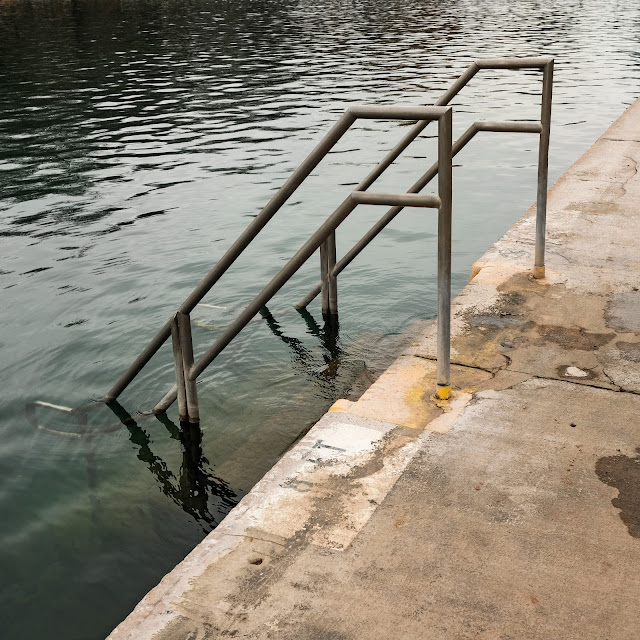 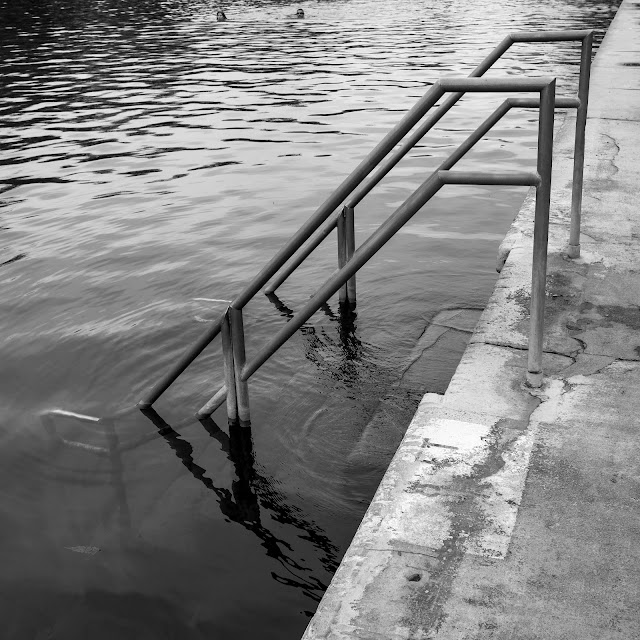 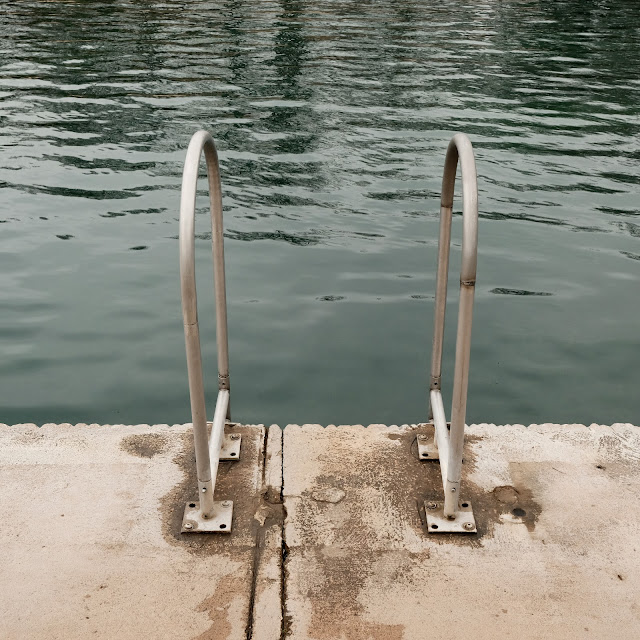 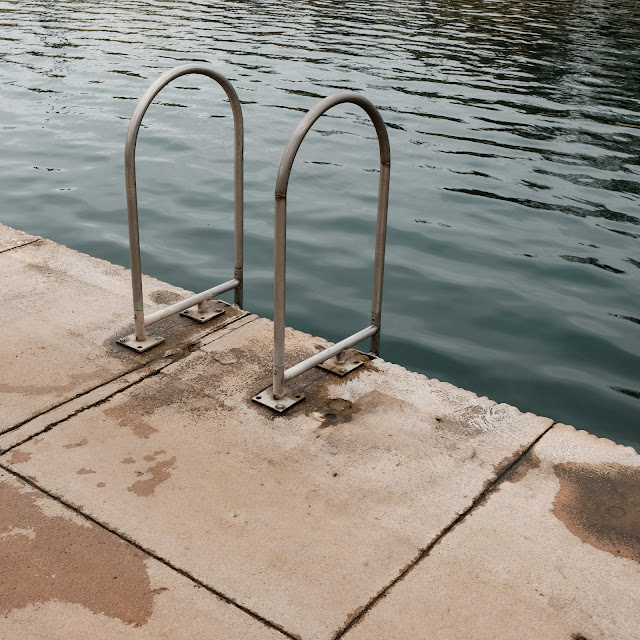 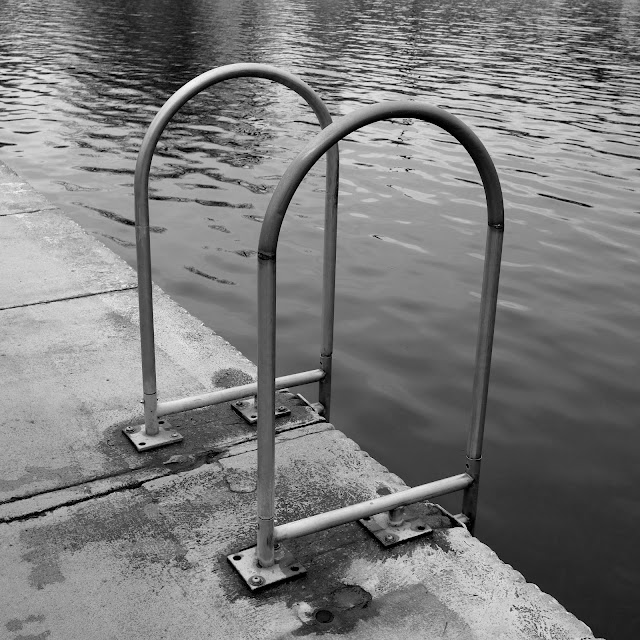 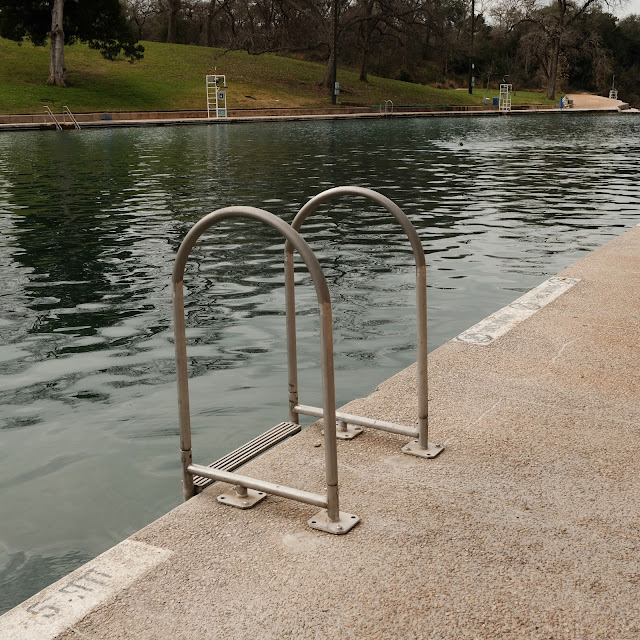 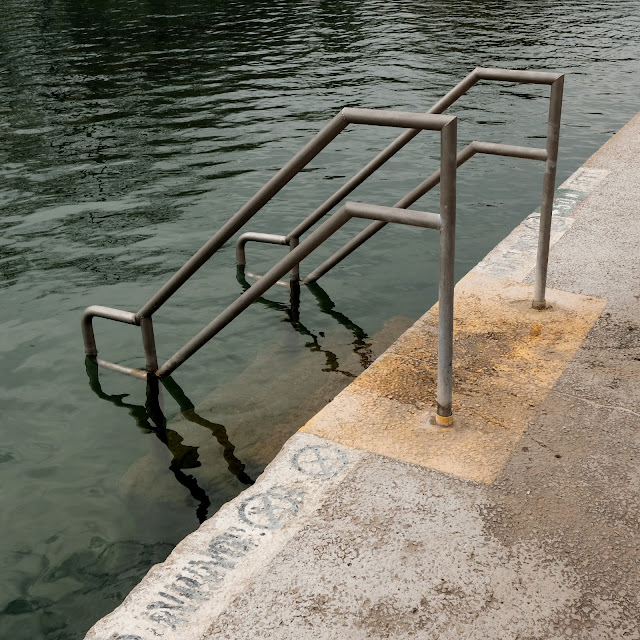 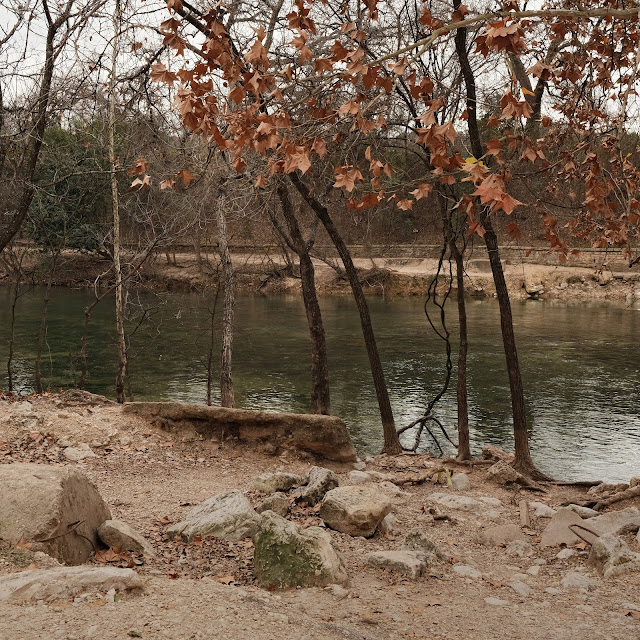 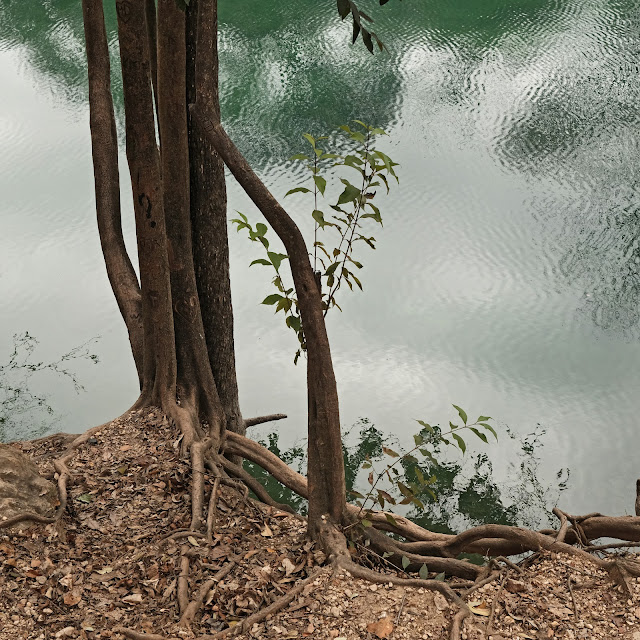 Tomorrow I'll swim early and then take another big walk.
It's a great way to keep holiday stress at bay.

Posted by Kirk, Photographer/Writer at 20:14 9 comments: