I photographed a play yesterday evening. It was called: "THIS GIRL LAUGHS, THIS GIRL CRIES, THIS GIRL DOES NOTHING." It was my first rehearsal shoot using both the XT3 and the XH1. 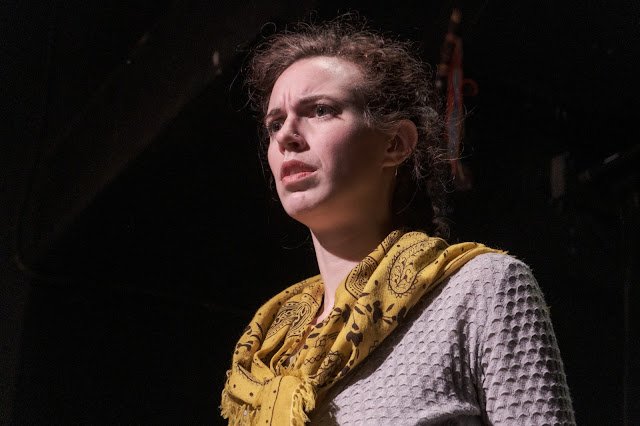 I was walking around the Zach Theatre campus and looking at the photos that are on the walls of every building. I realized that over the last several decades of photographing for them that I've shot dress rehearsals and marketing shots with every camera format from 4x5 inch sheet film to one inch sensor digital and, literally, everything in between. So it should come as no surprise that I was back over to do a quick project with a relatively new camera. At least new to me...

The play, This Girl Laughs, The Girl Cries, This Girl Does Nothing, is not a big blockbuster play; it's aimed at family audiences and is being presented on the theater's smallest stage. The Whisenhunt Theater seats about 100 people and almost all the plays presented there are done in the round. All the lighting is mounted on grids and floats under the ceiling about 25 feet up in the air. Because of this it's hard to get soft, frontal light, or even fairly low angle spots on the actors so the lighting is always a bit more problematic in this venue. It's also the last theater of the three production spaces on the campus that still uses all tungsten stage lighting.

All the walls and all the overhead space is painted matte black so the room is a big light sponge and you can't depend on reflected or bounce light from the walls or ceilings to help bring down the contrast range. Shadows go to black pretty quickly...

Yesterday was a dress rehearsal and I was able to move around the theater to shoot. That's a luxury I don't always have when we're photographing in our biggest theater, the Topfer Stage, because the cost of producing in the bigger space is higher, schedules are tighter and we almost always have an audience during the dress rehearsals of the major plays and musical presented in that space. That can make shutter noise an issue.

"This Girl Laughs...." is a joint production between Zach Theatre and the University of Texas at Austin drama department. We had four actors on the stage and one musician over on one side (stationary). As you can see, the stage dress/props is minimal so the play depends heavily just on performance.

I took two Fuji cameras; the XH1 and the XT3 along with a smattering of lenses. But the play is short and moves fast and there was scant time to waste with lens changes. I put the 18-55mm kit lens on the XT3 so that combo would take advantage of the lens's image stabilization and put the faster, 50mm f2.0 WR lens on the XH1 to give that combo equal access to image stabilization. Both cameras were set to ISO 3200 although, when the lighting got dramatic enough (meaning: very low levels) I did go all the way to ISO 6400. I used each set up with the lenses nearly wide open so I could get a shutter speed of around 1/250th of a second which gives me a fighting chance at keeping hands and moving feet from blurring too much. It was weird, for me, to use the ISO dial as my basic exposure controller but I felt compelled to stay in the shutter speed range and if I ran out of light there was no where else to go except UP in ISO.

How did each camera do? Well, when it comes to telling them apart the only way I can tell without looking at the file info is to look at the angle of view in the frame. If it's wider it had to come from the XT3 if it was tighter and had shallower depth of field then it probably came from the XH1 and the 50mm. The colors matched well between the cameras and as far as noise performance goes I'd call it a tie at ISO 3200.

But for all the ballyhoo about the XT3 having better autofocus I'd say that was immediately cancelled out by the one stop difference (or more) in aperture. If one camera has more exposure on the sensor it stands to reason that the AF performance is going to be better and that was the case here. I used S-AF for both cameras and they both did a good job. I can't imagine anyone complaining about either camera if you were outside shooting under an 18 EV lighting situation. But even here in the near dark each camera locked in well and quickly and neither hunted for focus at all.

I have to say that my experiences so far make me partial to the XH1 with battery grip over the handling of the smaller and daintier XT3 without grip. I am also much more impressed with the almost silent mechanical shutter in the XH1. Yes, you can always switch either camera to its electronic shutter mode and go completely silent but there are some situations in which that's a non-starter for me. When I shoot performances at the bigger theater all of the lighting is done with LEDs. Mostly high output LED spots made for theater, not for filming! They trade a certain amount of flicker free performance/resistance for throw and power. Shooting with fully electronic shutters is an invitation to non-stop banding if you are shooting at shutter speeds that are high enough to freeze motion (anything from 1/125th up...). I've been down this road with Sony, Panasonic and Nikon as well and none of them are immune from the nasty combination of theater LEDs and electronic shutters. It's all venetian blind patterning all the time. Being able to use a nearly silent but fully mechanical shutter may be specific to my work but it makes a huge difference to me. I can't wait to sit through the dress rehearsal of the next big production, with a full audience, with two gripped, XH1s in my camera bag, both set to fully mechanical shutters... If there's music no one will ever hear the shutters....

Both the XT3 and the XH1 have basically the same menus and the same control layouts. Since I was shooting in manual exposure with both cameras I didn't have to test whether or not the removal of the exposure compensation dial and the addition of a top of camera info LCD was a good or bad thing. I will note that being able to see a bunch of important camera info in the top mounted LCD was a plus.

Basically, the cameras are so much alike that I can go back and forth without having to overthink anything. It's pretty straight forward. I do find that I like having the battery grip on the XH1; partly because I can use the camera in the boost mode and would never have to worry about running out of electrical juice during a long performance,; and mostly because it makes shooting in a vertical orientation easier and more comfortable.

If there's a difference in resolution between the two cameras it more or less gets lost at the higher ISOs. While both cameras had well controlled noise profiles at 3200 I've seen better from cameras like the Nikon D750 and the Sony A7Rii.

One thing I've learned about evaluating the image quality of files is not to rely on the "standard" previews that are the default in Adobe's Lightroom. They are invariably higher compression than the final processed files will be and have more noise and less detail overall. I was depressed one day when I looked at some files shot at high ISO in Lightroom. I thought I'd be spending a lot of time cleaning up noise. But after sending a few test files all the way through the process and looking at them in PhotoShop, or even online at Smugmug.com (at the highest magnification), I could see that they were much better than the previews might have us believe. Now I either use 1:1 previews or I sample files in PhotoShop to make sure that anything negative I'm seeing is a result of the preview creation and not inherent in the files themselves.

If you must have an opinion about which of these two cameras I like best I'll say straight out that I prefer using the XH1 to the XT3. I like the bigger body and the advantages of the grip. So much so that, after last week's shoot for "Hedwig" (another Zach play/musical) I ordered a second XH1 and grip. It arrived today and, for the time being, the twin XH1s seem to have earned the prime spot as my live theater photography cameras.

I do have some thoughts about lenses and shooting in a smaller studio space. The 50mm f2.0 was about as tight as I needed for yesterday's shoot. I could have, or perhaps should have, put the 23mm f2.0 on the XT3 and just done a classic two lens shoot. Then again, I'm sure I would have thrown myself a curve ball in the process somewhere...

That's all I've got today. I'm happy to have an XT3. I'm looking forward to using it for video. I'm happier to have two of the XH1s, I'll use them for all the still photography stuff. Fun cameras! 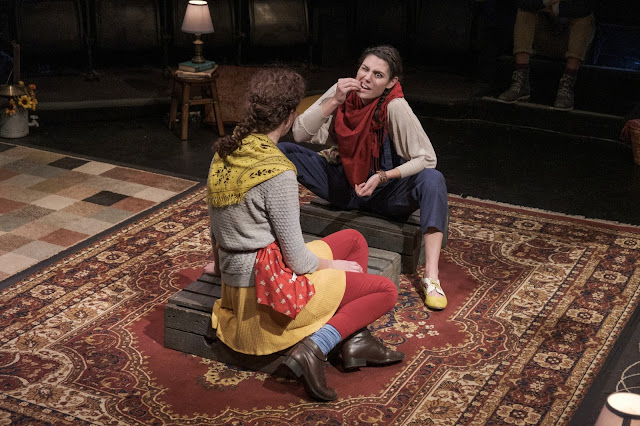 One more odd observation. I recently updated the firmware in my first XH1 body to rev. 2.0. It added a lot to the camera. The camera I got today was brand new, in the box and came straight from B&H. And it came with the original 1.0 firmware. As soon as the batteries charged up I updated the firmware. I guess I just assumed that new, shipping cameras would have the current brain food in them. I was wrong. Maybe Fuji just wants us to learn how; you know, just in case we need to update in the wild..... 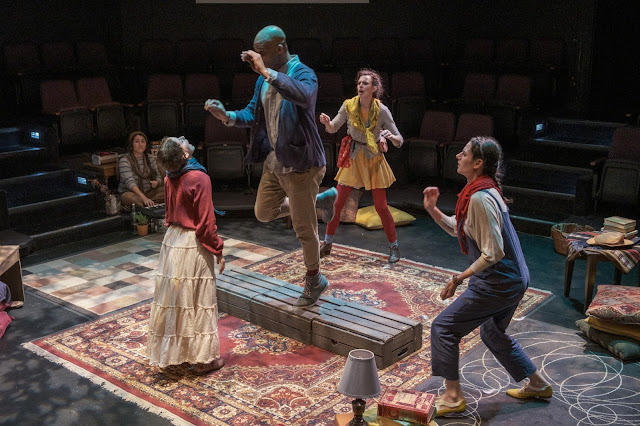 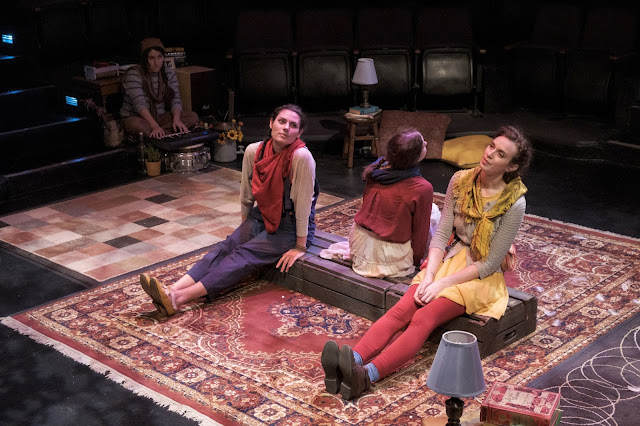 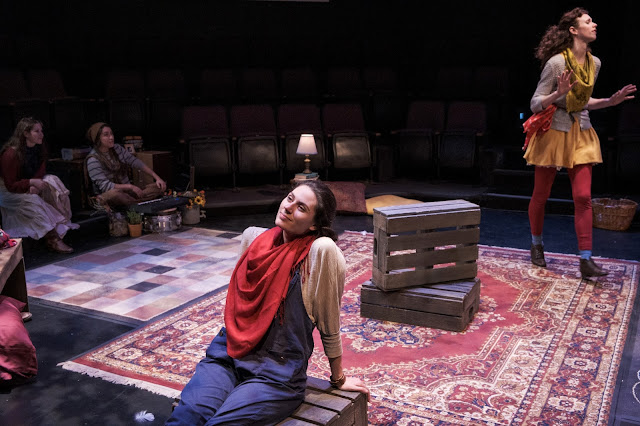 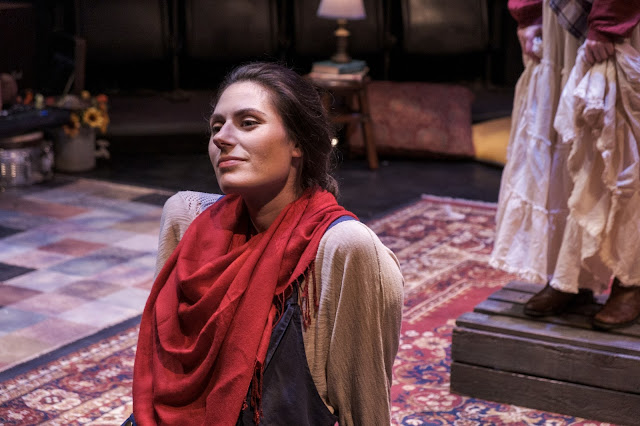 Posted by Kirk, Photographer/Writer at 18:15 11 comments: