A Quick and Happy Review of Annie Leibovitz's Book: ANNIE LEIBOVITZ AT WORK 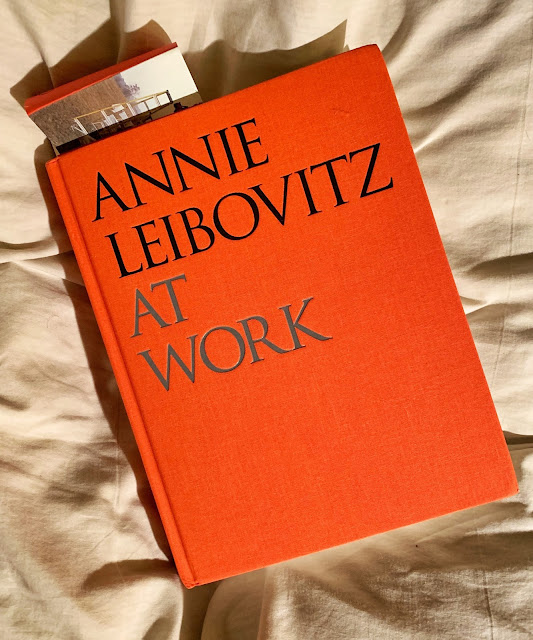 Early in my career I was a teaching assistant for a very good photographer in Austin named, Tomas Pantin. Tomas was not only a lecturer in the UT Art Department's commercial photography program but also a sought after photographer by editorial clients and advertising clients alike. At one point Annie Leibovitz and her team of New York City assistants swept into town and needed a studio. They got hooked up with Tomas. He had a great studio on 7th Street, right in the middle of downtown. They came to town to shoot a portrait of Elvis Costello. I was impressed.

Years later, in 2001, I was returning to Austin late in the evening. I'd been on assignment for eight days in Maui and I'd taken the family along with me. Our client was gracious enough to book a suite for me and the family and to pay for them to attend and to fly there as well. I had a great, exhausting, typical dot com, over the top shoot for a company that burned out and closed soon after. We were heading home, Ben was about five at the time, and we were ragged from a long layover in Denver.

When we walked back into the house the phone was ringing and I answered it before the machine picked up. It was Annie Leibovitz's first assistant. They were all in town, in a rented studio, and Annie's Profoto flashes either didn't get there in time or they had a malfunction; frankly I don't remember which. At any rate they were calling around to see who they could rent a bunch of Profoto strobes from.

At the time we were still shooting most stuff with medium format Hasselblads and routinely used a couple of 2000 watt second Profoto strobe boxes, a couple of 600 watt second boxes, and we kept a separate store of Profoto mono-lights for smaller shoots. We probably had more Profoto stuff sitting around than anyone else in town and Annie would NOT shoot with anything else.

But her assistant was rude. Really rude. He demanded that I put the whole inventory in my car and rush it all over to South Congress Ave. to the rental studio RIGHT NOW.  I told him I'd be happy to rent the gear to the production but they'd need to send someone over to pick it up. He told me that was NOT the way it worked and I should, "get my gear and my ass in my car and get moving because.....Annie was waiting."

I gave him simple and direct advice. I told him to fuck off. Then I hung up the phone. They called back but I didn't answer. And because of that one person's bad attitude I harbored negative feelings about Annie Leibovitz for quite some time (my problem, for sure). But that didn't stop me, even for a second, from deeply admiring her work, buying her books, and keeping up with her progress as an artist.

I have collected all of the books of photographs she's put out but I missed buying the one I have pictured above because it's not really a collection of photographs, it's a writer's book about the what and why of her work and not a portable gallery of greatest hits. I didn't think I would learn anything from a "how to" book about A.L. that I hadn't already read or seen in print in various places.

Recently I had a change of heart. I'd just re-read Susan Sontag's book, "On Photography" and it piqued my interest once again in Ms. Leibovitz. When I saw the book at a local bookstore I decided to give it a go and brought it home. Funny thing; I let it sit on my desk for two weeks before I pulled off the protective plastic wrap and sat down to have a look and a read.

I'm so glad I did because it's the first time I feel a kinship, or a sense of universal, photographer alignment with A.L. The book is a series of stories about how she came to be in each different photographic scenario and about her thought processes in setting up certain shots, and cajoling celebrities into doing crazy stuff which, in turn, is the stuff of some of the great American photographs of the 1980's, 1990's, and the 2000's.

Don't be a literal, photo-geek and buy this book hoping to find lighting diagrams or gear lists; they are NOT in this book. Don't buy it hoping that you'll find Joe-McNally-Like self aggrandizing stories about cobbling together 250 $600 flashes in order to shot a bad shot in a desert which could have been done with one Elinchrom Ranger flash......You won't find much technical information at all. Actually, close to zero...

So, these are the kinds of books I hear most photographer say they'd really like to see when they've arrived here, mentally battered, after some tenure at DPReview. As an antidote to the compulsion to reduce the secret of all photography, and success in image making, to a catalog of gear. The antidote for yet another recitation of the merits of various, cheap Chinese flash triggers. The prescription for one burned out on reviews of.....wait for it......the best camera straps.

Don't buy this book thinking that "Annie" is going to teach you how to light wannabe fashion models with your Godox flash. Instead, embrace the book if you want to understand the yet unfinished arc of one of the great photographers of our time, and what she brings to her work BESIDES cameras, lenses and other material.

I liked the book a lot. I'm glad to have let go of my negative feelings about a fellow artist and to have taken the plunge into one part of her thought process. You are probably way ahead of me there.....
Posted by Kirk, Photographer/Writer at 21:48 12 comments: