What a strange day... I started out with one thing in my head and ended up with something else. 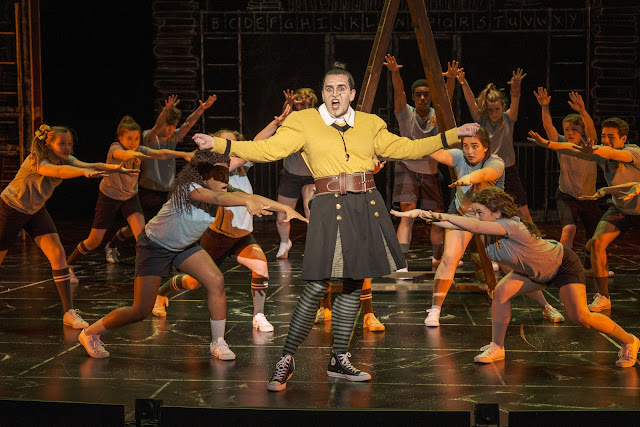 I had occasion to use the Lumix S1 camera along with the Sigma 45mm f2.8 lens yesterday and I really enjoyed the images I got from that combination. I also liked using the camera; it was very satisfying. So much so that when I woke up this morning I compiled a list of all the Fujifilm equipment that I own with the intention of sending the list to the used equipment buyer at Precision Camera to get pricing. I had the weirdly compelling idea that I would winnow down all the equipment in the studio (monolights, c-stands, flags, umbrellas, booms, Magic Arms, flash meters, bags, cases, rollers and all the rest of the stuff that seems to collect, like barnacles, to slow moving photographers....) to two cameras and three lenses. These would include: one Lumix S1 body and one Lumix S1R body. The currently owned Lumix 24-105mm lens, the 45mm f2.8 Sigma lens, and, I'd also splash out for the Lumix 70-200mm f4.0 lens in order to complete the ensemble.

Of course, this kind of thinking is nothing new for me. I'm sure, if you've read the blog over time you've seen me embrace and then abandon equipment at roughly the pace of the changing seasons. But by the time I finished my morning swim and had savored a decent cup of coffee I had almost talked myself into going "all the way" this time. Bare walls, empty shelves, an equipment cabinet with ample negative space. Perhaps I'd keep a few smaller light stands and a few LED lights but I'd certainly get rid of the ancient stands that hold seamless paper, along with that infernal boom I've used only once a year since I acquired it.

But why? I know the grass looks greener on the other side of the fence but does that also mean the grass is greener in my front yard than my own back yard?

I think I'm just starting to resent the clutter and, also, the more traditional fixtures are a reminder of how much has changed in the business and how little relevance many pieces of gear have for me now.
The C-Stands are great when you need to put up heavy lights and hang soft boxes securely but we don't seem to do the kinds of big studio productions we did when I bought a lot of this stuff. So much more is being done on location and so much of that is about leveraging existing light in existing spaces, not creating worlds in a studio.

But why get rid of so many cameras and lenses? Especially since I liked them so well and used them to good effect.

I don't know if it was the cleaning out of my parents' house, a process which took months, that made me realize how much stuff people acquire and then rarely use. It could be that I feel guilty for owning more cameras than I can reasonably use up. It could be the friction of having to decide between too many lenses when I pack to go photograph stuff. It could be that my brain is just going over how many batteries, and how many different kinds of batteries, there are for all those different cameras and how most of them are going to decline without adequate use and care. Time which I no longer want to expend.

It could be that the kinds of things I've been interested in photographing no longer appeal to me and that by starting over I'll give myself permission to do things differently this time. Maybe more in line with my inclinations and intuition and less so because the decisions seem (at the time) to be rational, and an adjunct to a profitable business strategy. Maybe I'm just tired of everything that I've seen for the last few years and ready for a change. Maybe I've become tired of having too many choices.

This time, however, over the course of the day I started taking my own advice. Advice I'd given recently to a friend who was about to go on his own new buying spree. I suggested that he look at recent work to see if there were things he would miss if he changed his working gear. After a review he settled down and stayed with the system he'd been (successfully) working with for the past few years.

But what really changed my thinking was that I stopped thinking in terms of depreciation, obsolescence and work, and started thinking that it didn't matter if I kept or sold the equipment. By selling it I'd never come close to recouping what I'd actually spent and, knowing myself, I might wake up one day having nostalgically dreamed of gear now departed and gone out to buy it all over again. Might as well keep it.

At the end of the day the thing that changed my mind about my all or nothing concept of gear management was the photographs from yesterday's studio portrait session with a medical professional. I ended up not using either the Fuji cameras or the Lumix camera but I embraced the weirdness of the Pentax K-1 and shot all my images in a square, 1:1 format. I figured there would be enough resolution in the raw files to crop in any direction we might want.

I liked the look in a different way than I liked the look of the photographs I'd shot with the Lumix earlier in the day. But I liked the Fuji images I reviewed over the course of today in a way that was totally different than the other two. In the end, at least for today, I think I'll keep everything around until life changes so much that the idea that cameras systems matter at all becomes moot.

Most of the lighting gear is still going to go. I just use different stuff now. It seems more important to get everything onto an airplane these days than to do things at the level of sturdiness that we used to shoot for. Don't know why but it just seems to be the trend.

Finally, I might just move everything into a different room and make the studio more minimal. White walls, tall ceilings, one modern desk and chair, no other furniture. No gear. No prints on the wall.

Funny, when I was younger and couldn't afford exactly the gear I wanted I always wished for more. Now, when I can afford whatever gear I want, I don't seem to want much at all. It's the complicated logic of getting rid of it that now seems daunting.
Posted by Kirk, Photographer/Writer at 18:07 5 comments: 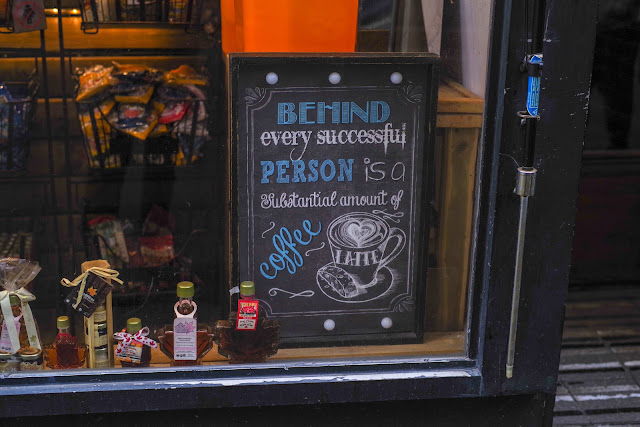 People in Montreal seem to value coffee almost as much as do photographers in Austin. There's pretty good coffee almost everywhere and truly great coffee shows itself out in the open, from time to time. My favorite locale for a nice cappuccino, or even drip coffee, is Crew Collective Café which is in a giant, ornate bank lobby. Half the huge and architecturally captivating lobby is the coffee shop while the other half is a shared workspace, something like a much upscaled version of WeWorks but without the former's former weird management vibe.

I had a hand made (not plastic packaged and reheated) breakfast sandwich there on my first morning that was a toasted sesame seed bagel (which, on its own, was divine) on top of which was a generous dollop of nicely spicy guacamole, on top of which was a bed of sprouts brushed with just a little lemon juice. The sprouts formed a nest for a perfect soft-boiled egg. The sandwich was finished with just a bit of dijon mustard. Weird to describe but wonderful to eat. 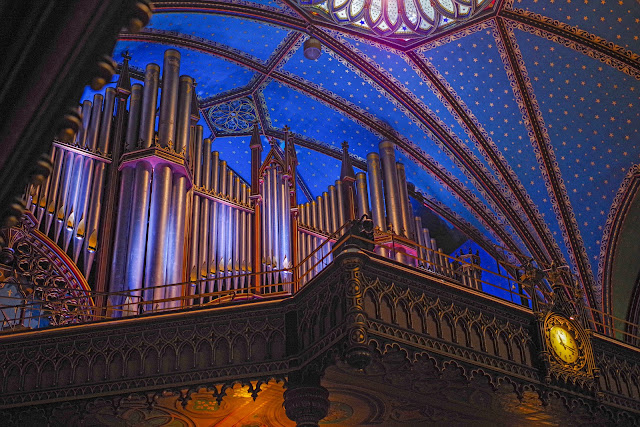 So, the giant basilica in the middle of the old town... Did the crew at Disney World light the interior? It was pretty darn fabulous. I liked the shots I got from the very earnest Pentax. I liked Belinda's perfectly composed shots from her little Canon G15 better. But I think, technically, the best shots came from... my iPhone XR. Oh well. That's what my friend, Andy, was predicting over at ATMTX just a few days ago. Something about those phones and big, contrasty scenes is like magic. If you go to Montreal the interior of the giant cathedral is well worth the time. Especially if it happens to be cold and rainy outside. 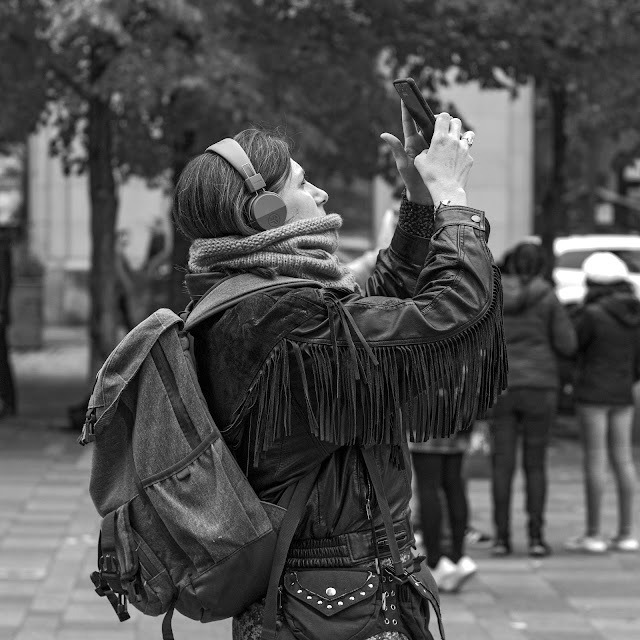 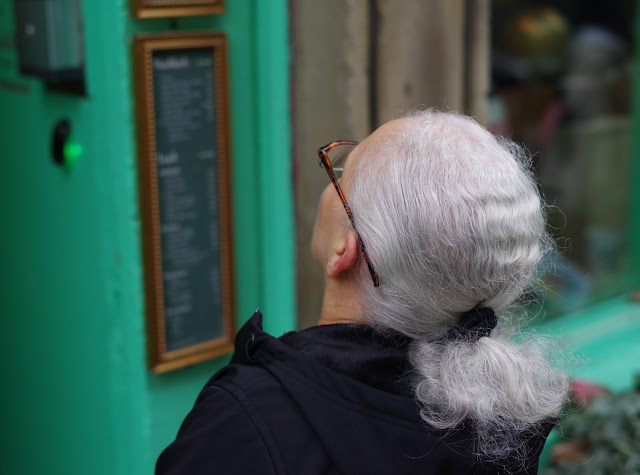 We're all getting grayer. Some of us handle it better than others. I should pay attention and learn from the calm people. 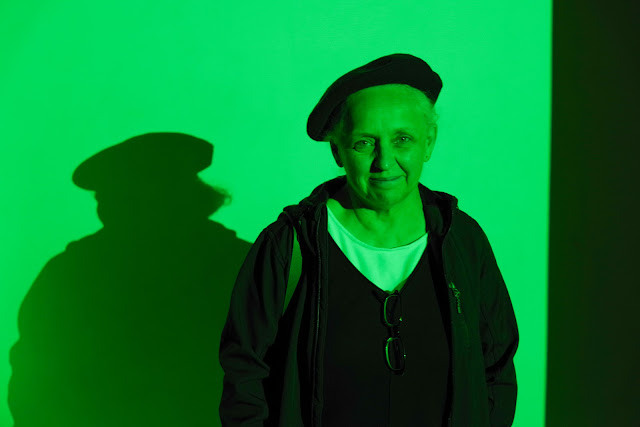 Yes. I asked Belinda to step into the green light at the Musee Des Beaux Arts....
Note the beret purchased in 1985 in Paris. It travels everywhere there's cold weather. 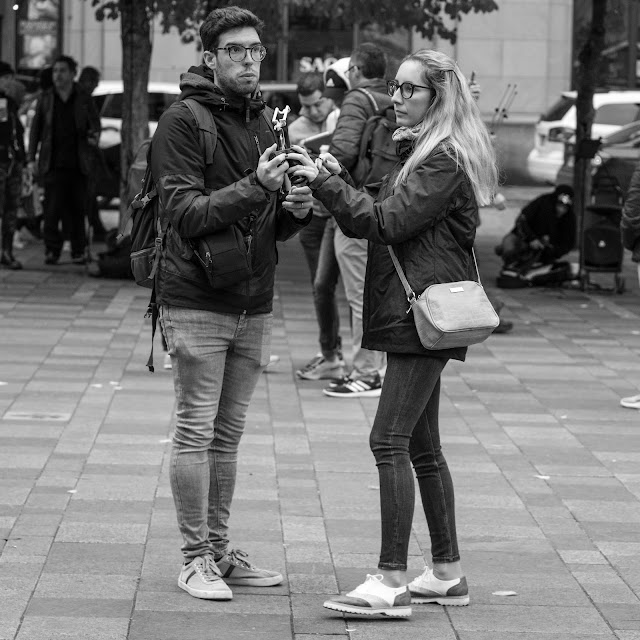 Newest marital strife, who will be the director of the selfie stick? 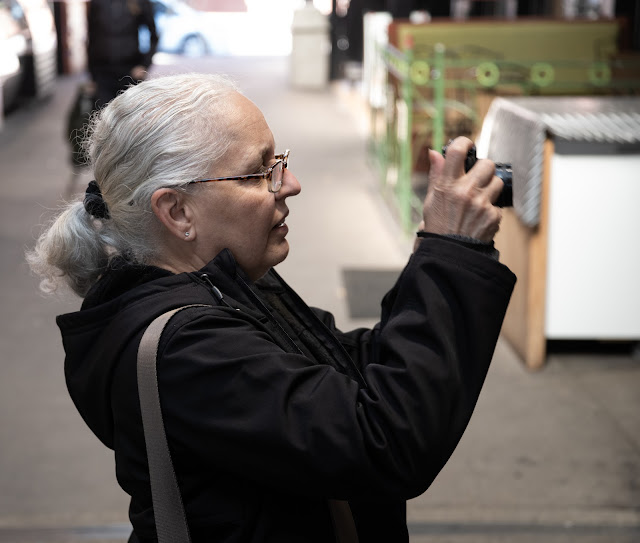 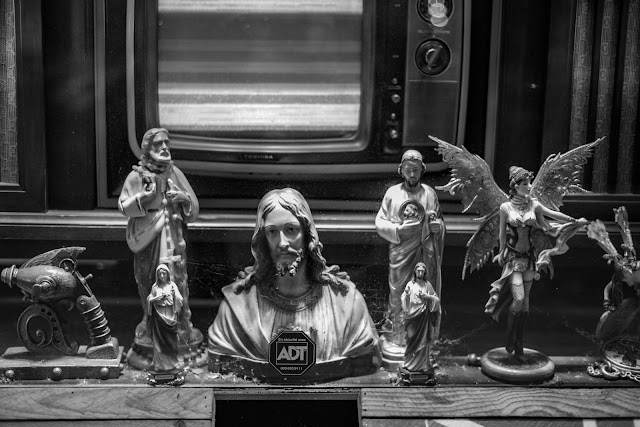 Window decor with flickering television set in the background.
And the burglar alarm company logo right in the middle of everything.

Posted by Kirk, Photographer/Writer at 09:30 11 comments: