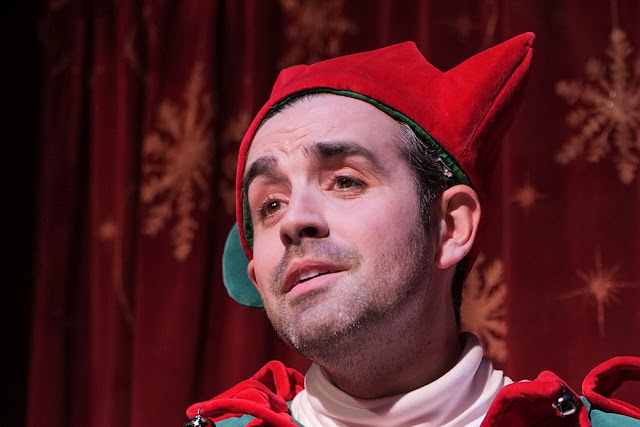 jimmy moore at 1:1. Some pixel peeping.
See image below for the full frame....

I shot the dress rehearsal for the David Sedaris play, "Santaland Diaries" last night. It's a one person play and it's being performed on the Zach Theatre's smallest stage which is in the round. Since the actor needs to play equally to all quadrants of the theater, and since we had an audience in attendance, I was positioned in one spot and had to pay rapt attention and shoot while the actor was facing me. The one exception is the shot I include at the bottom of the blog (which is not supposed to be a "great" photography but rather a photographic example of lens performance).

The lighting in the smaller space is lower output which means lower shutter speeds and wider apertures than when I'm working in our premier theater. The walls and ceiling are also painted matte black so there is no reflection to provide any additional fill light. Still, it wasn't a big problem.

The image above is a 1:1 crop of the image just below. This image was taken with the 50mm f1.4 lens, stopped down to f1.6. Not bad. You are looking at a small crop of a file that was downsized to 2200 pixels on the long side for Blogger. The original Jpeg file yields distinct, individual beard stubble and dramatically defined eyelashes. The lens and camera together constitute a formidable image tool. I think the lens might actually be worth the $2,300 asking price..... 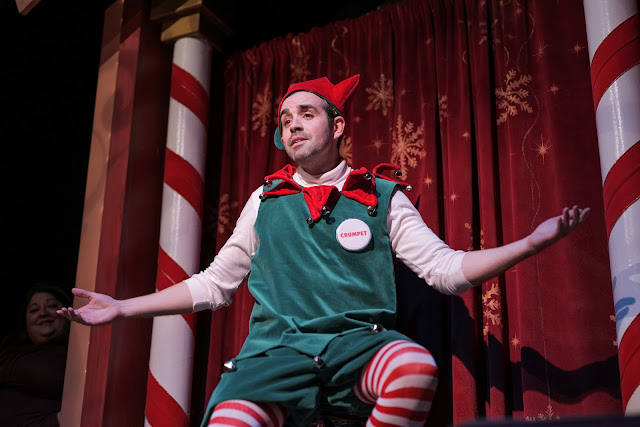 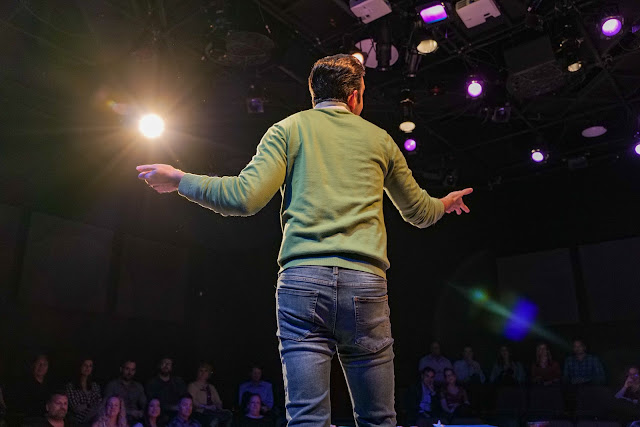 I wouldn't normally include an image of someone's back but this photo fulfills two objectives; it shows just how sharp the 24-105mm f4.0 lens is when used at maximum aperture ( you can see the threads and weave pattern in his sweater and the thread stitching on his jeans) but it also show the resistance to a bright, direct light source that appears in the scene itself. While there is an artifact to the right side of the frame and there is a bit of contrast lowering around the light the contrast and detail are impressive considering that the image was capture at the widest apertures of the zoom lens, used handheld. Works for me.

Just a random set of observations about last night's paid job. New cameras and lenses make me sit on the edge of my seat until I'm certain that everything will work out.....

Do you have a favorite holiday movie? List it. Thanks!

Posted by Kirk, Photographer/Writer at 20:25 7 comments: