A very short observation about the Nikon z7 camera and the 50mm f1.8 Nikon Z lens. 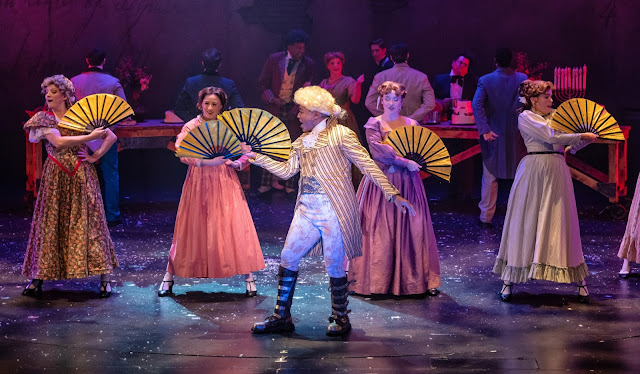 As hard as it might be to believe, I have a friend who is just a few years younger than me who has been in the photography business for a few years longer than me (darn; I spent too much time teaching and in advertising!!!) and who probably buys equipment more frequently and more dramatically than me. I know, after the recent purge that must be hard for sane people to even comprehend...

He's been through more high-end systems than I have at this point having shot professionally with medium format Hasselblad and Leica systems; sometimes even overlapping them. He was an early adopter of the Leica SL system and he's been through most of the Canon and Nikon catalogs. But spend as he might his income from his work keeps surging ahead of his expenses. I tell him that it's not fair, he never had a kid to put through college. He laughs and says that everyone has to live with their choices.

We've known each other for decades and have done some travel assignments together. He might be a bit obsessive about gear but he's a great guy. And a brilliant photographer. When we're both in town we usually meet up for coffee or lunch once or twice a month, a bit more during the holidays. And we're always comparing notes about the state of the health of the professional photography business.

We met for coffee yesterday at Trianon Coffee House which is just around the corner from my stately office. Usually we bring along some interesting new acquisition to share. I figured it was my turn to have the latest and greatest so I brought my Lumix S1R and the 50mm Pro S lens. I showed it off and we talked about the potential of the system, etc. Then he reached into his charcoal grey camera bag and pulled out a smaller and lighter body. It was a Nikon z7, a camera I'd more or less overlooked.

And when I write, "overlooked" what I really mean is that as I got more and more into the Lumix S system I developed more and more tunnel vision. It's a defensive mechanism most people develop when they are in the late stages of decision making. It keeps them from constantly reviewing potential choices in a wider category before finally being overwhelmed by choice and delaying making a decision, or giving up deciding altogether.

He handed the z7 to me, equipped with a new Nikon 50mm f1.8 and I was....impressed. It's half the weight of the S1 and smaller to boot, but it has a nice handgrip and feels very good to hold on to. I like the basic body design very much. I clicked on the power switch and focused on a nearby cup of coffee with the lens set to its widest aperture.

The click of the shutter was aurally beautiful with none of the slappy, tinny, bang-y sound of a mirrored camera. I clicked the shutter a few more times to confirm --- that Nikon finally got the shutter sound and feel just right. The photo (viewing just on the rear screen) was wonderfully smooth and ran from nicely sharp at the point of focus to liquid-y soft as it ran out of focus in the foreground and background. In fact, if the lens were longer and still maintained its look it might be a perfect portrait optic.

While the EVF is not quite as detailed as the one in the S1 it's close enough to be de minimis.

So, what are the main differences between an S1R and a z7? The resolutions are close enough to be meaningless. The z7 would be a much more comfortable (size and weight) all day long street shooting camera. The 50mm 1.8 Nikon lens is about 1/3 (or less) the weight of the Panasonic 50. So, for the most part, where imaging specs are concerned they are on par with each other. But when it comes to comfort the Nikon gets the nod.

The S1 is better for video but the S1R is also equipped with better video specs than the Nikon and two very fast card slots, along with an audio interface unit for professional microphones and a full size HDMI port. But the Nikon is smaller and lighter. (I haven't compared video from the z7!).

If I did not want the higher spec video capabilities, and if one can live with one card slot ( I can) then I think the Nikon might just be the better "fun" all around art camera. But for some reason I'm into the brute force build of the L-mount products. Still, the z7 is much better "in person" than on paper....

Just thought I'd toss a bit of positive non-shade on the Nikon mirrorless stuff. It feels a lot better (menu and operation-wise) than the Sony cameras. But I'm optimistic, some day Sony will hire a haptics engineering team from Pentax or some other traditional camera company and they'll finally catch up and make a nice-to-use camera. They did it once before with the Sony a900 and a850 cameras but they must have early retired the team they must have inherited from their Minolta acquisition.

Now I can't make unequivocal statements about which mirrorless FF camera is the best. I'm split.

Posted by Kirk, Photographer/Writer at 15:06 14 comments:

An Assortment of Images (cropped square for Instagram) of Jimmie Moore as the Macy's Elf in "Santaland Diaries." 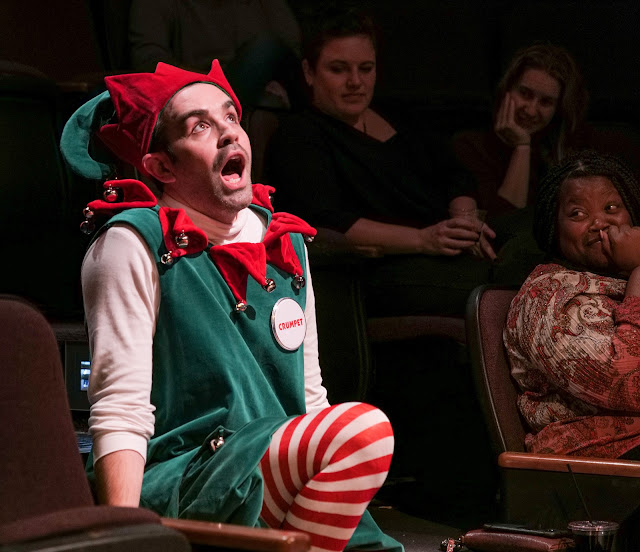 There are two theater assignments that seem to be most difficult for me. One is shooting theater in the round, where the audience completely surrounds all 360 degrees of the stage. Since the actors need to give equal time to all quadrants of the audience a stationary photographer will have to work hard to get good images because, unlike traditional stage/audience set-ups, he or she will only have about 1/4th the amount of visual content to work with. About 3/4ths of the play will happen with the cast facing in a different direction from the photographer.

We try not to shoot rehearsals of productions done in the round without an audience because no matter where the actor faces and no matter what the relation to the camera there will be nothing but empty seats in the background. We've found that's not the optimum way to create visual advertising in order to  sell tickets....

The second most difficult assignment for me is to shoot a one person play. There are only so many shots you can pull off that are different enough to make an hour or two of earnest photography worthwhile. An actor will have different expressions and gestures, and may work with different props, but without the dialogue and sound effects the photos, in isolation, quickly become repetitive and boring. While frequent costume changes help the reality is that most one person plays hinge on the quality and humor of the script. And the effective delivery of the dialogue. Neither are particularly (or even marginally) in the wheelhouse of still photography.

So, when we combine a one person performance with intimate theater in the round, I get a bit nervous about my ability to deliver the same value of content that we can get from a traditional production. But that doesn't keep me from trying my best....

Here's a sampling of my assignment at the dress rehearsal of Santaland Diaries on Thursday evening starring my good, friend, Jimmy Moore.  Click on the images to see them larger!!! 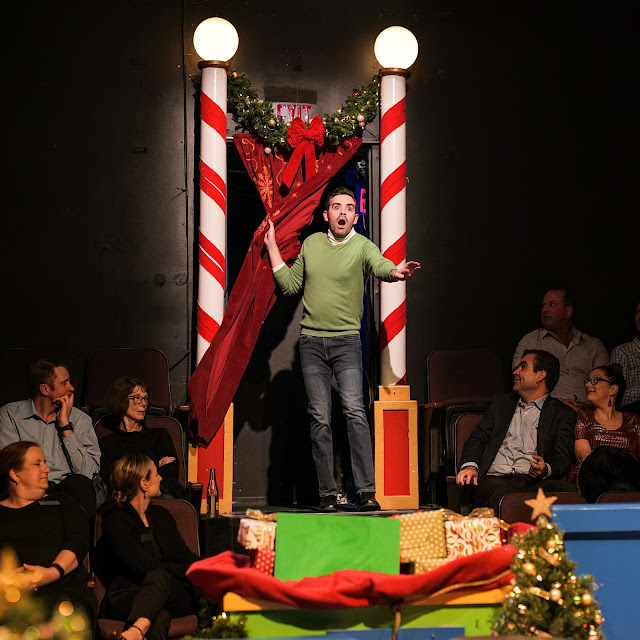 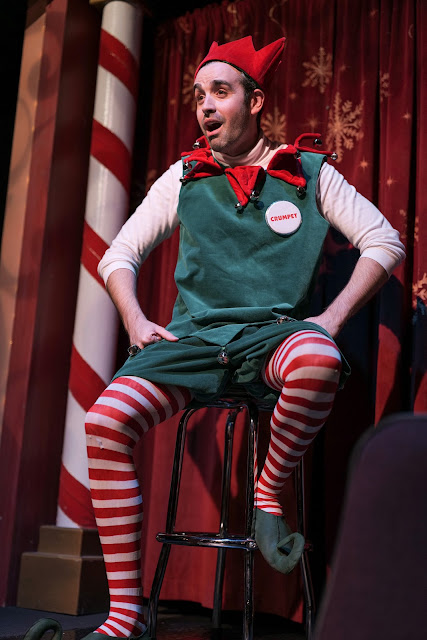 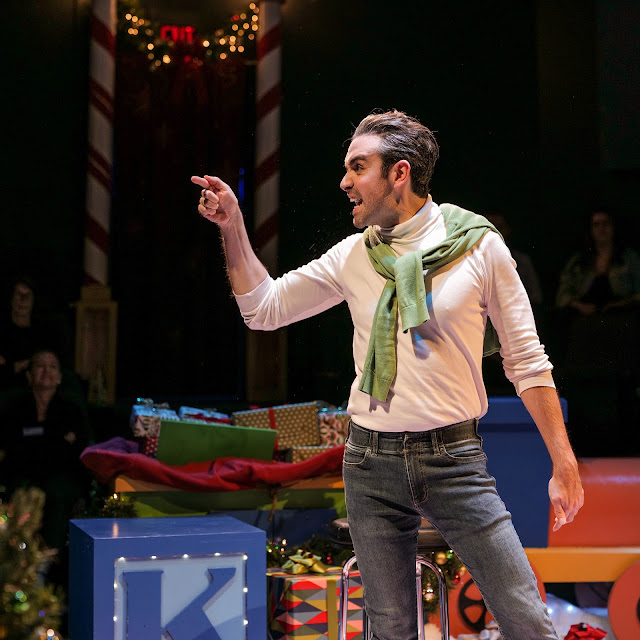 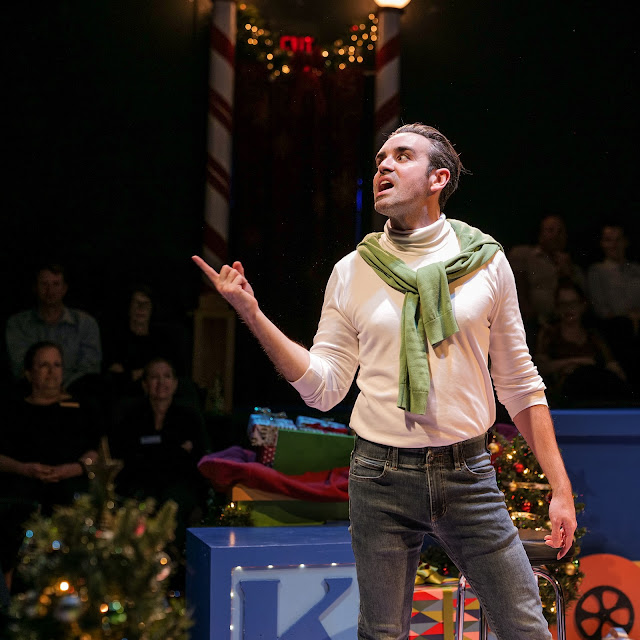 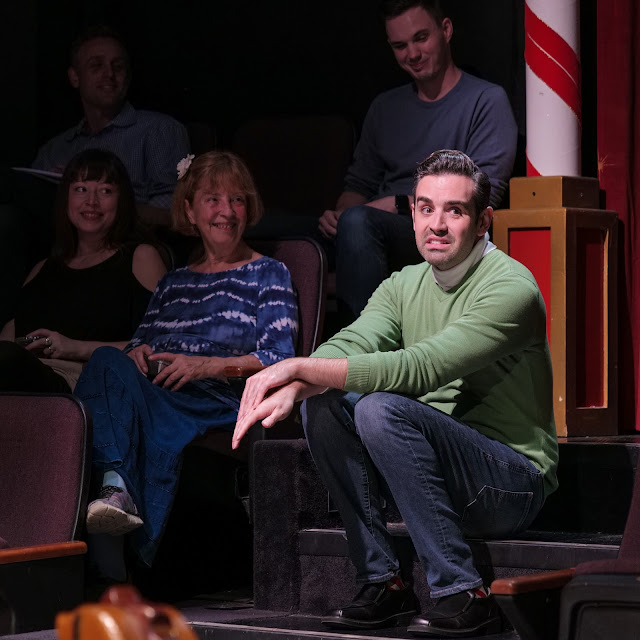 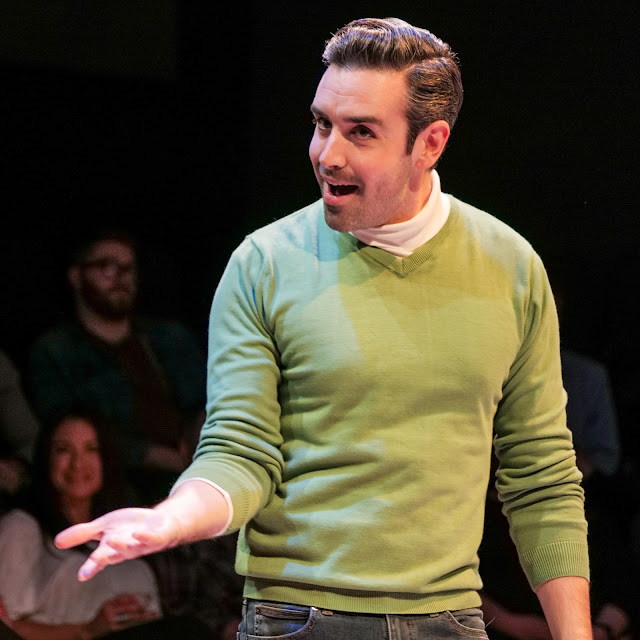 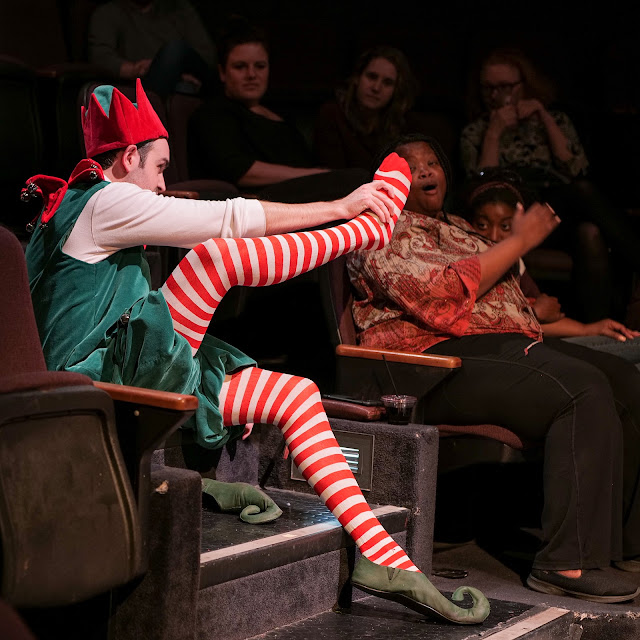 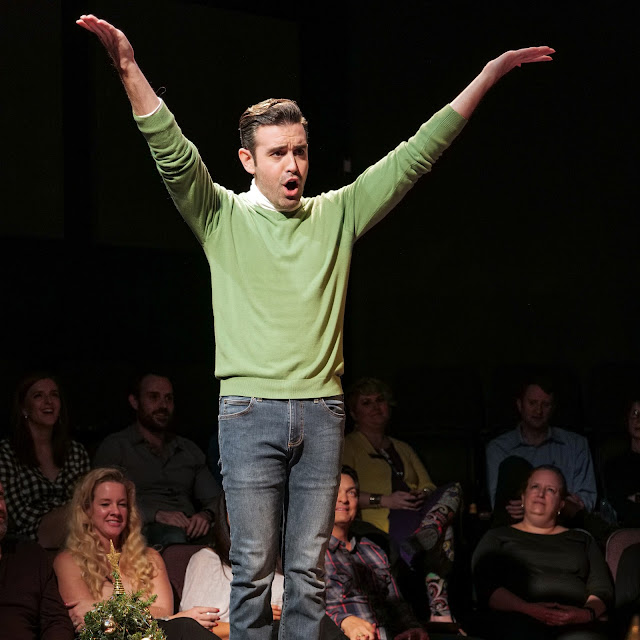 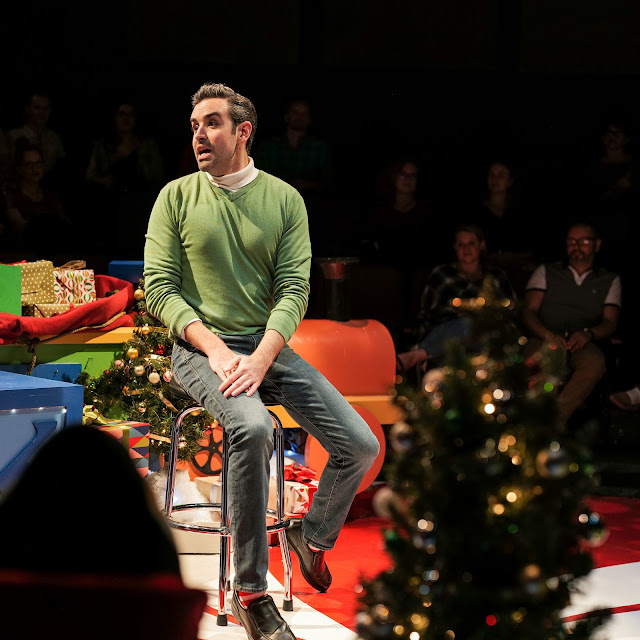 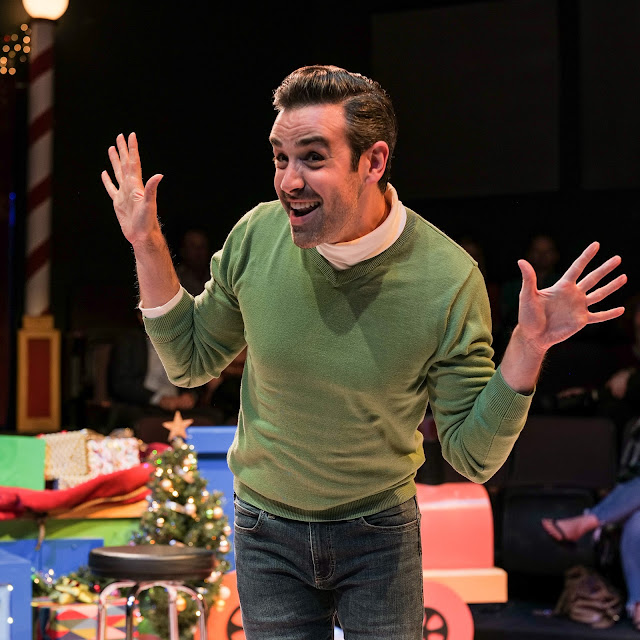 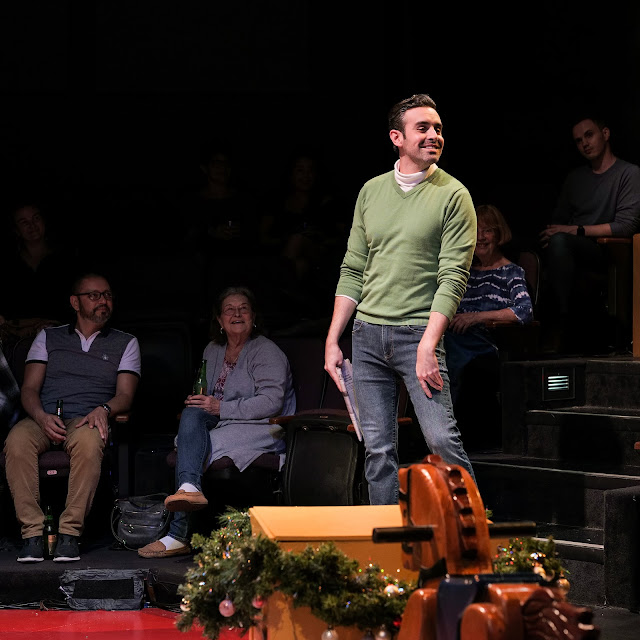 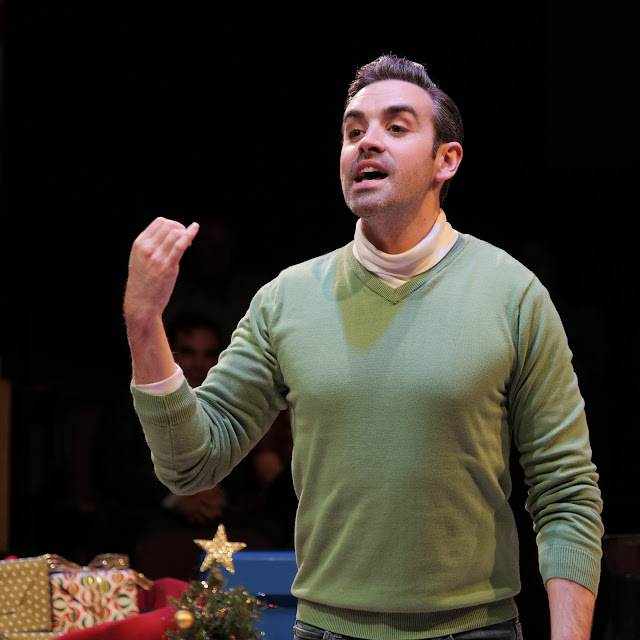 Posted by Kirk, Photographer/Writer at 11:07 3 comments: