So, I picked up a new camera on Sunday and took it out for a spin yesterday afternoon and this morning. Learning curve? Naw... 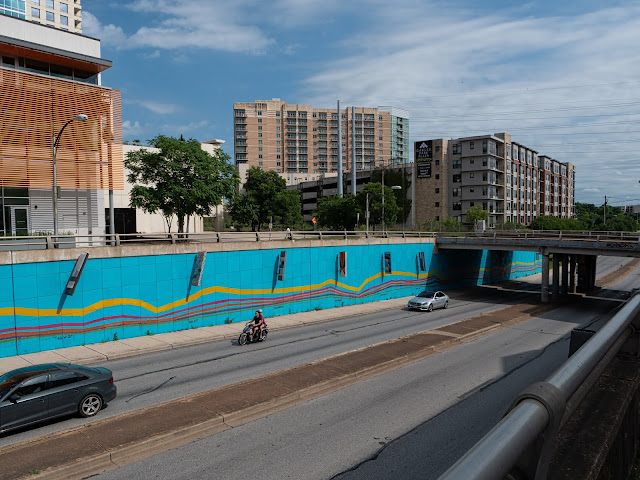 Let's consider this a short, mini-review of the Panasonic G9 with the 12-60mm Leica zoom. This particular one is the third G9 I've owned. I have experience shooting with these cameras in the theater, out on road trips, and touring around glaciers and natural wonders in Iceland. I've used this model extensively for location work commissioned by large companies. The one time in my life that I really, really regret selling out a system and moving on was when I bailed on a really nice micro four thirds system built around two G9s and a GH5 (or two...). I traded the cameras and some of the best lenses I've ever used for some new Fuji stuff. And while I liked the images coming out of the Fuji cameras just fine I never made the really deep; almost visceral connection I unwittingly made with the Lumix gear.

When the G9 first came out the idiot savants of the web pissed and moaned about how big and heavy the camera was. They seemed to think that the only rationale for using cameras in this format was to provide the smallest and lightest possible package possible for photography. They could not be more wrong.

The thing about the two professional Panasonic cameras (G9 and GH5) is that they were designed to fit just right in a human hand and to provide an advanced platform for a combination of high end video and photographing imaging capabilities. The size of the body was dictated by haptics, ergonomics, professional usability (full sized HDMI port!!!) and not by some wet dream about ultra-miniaturization.

After using the GH5, the GH5S and the G9s side by side for a good while I gravitated to the G9 for its handling and also for it's really nice color rendering in Jpeg. I was spoiled by four really wonderful lenses as well as a handful of just really good lenses. The four stellar ones were the Panasonic/Leica 8-18mm, the Panasonic/Leica 12-60mm, the Olympus 12-100mm Pro and the (absolutely delicious) Olympus 40-150mm f2.8. The two Olympus lenses were larger and heavier but I count them among the very, very best lenses I have ever used; regardless of format.

So, what does the G9 have going for it that makes it so desirable to me? What can this camera (and system) do that my two full frame S1 and S1R Panasonics can't?

There are obvious differences between the formats. The S1s and S1Rs offer, in the former, an insanely good high ISO sensor and, in the later, an extremely high resolution sensor. And both offer beautiful files with rich and accurate colors. But those cameras and their lenses are big, heavy and pricey. I love them when I use them for my paid work but I started chaffing at carrying them around as "casual, all day" cameras.

The first reason I like the G9 is that, along with the Panasonic/Leica 12-60mm f2.8-4.0 lens, it's a package that I can carry around on a shoulder strap for a long day and barely notice that it's there. If I don't need to shoot in the dark or make gigantic prints, or try to impress the hell out of a client by delivering enormous files, the G9 is the camera I prefer.

The three buttons just behind the shutter button are identical in placement and function across the G9 and both of the S1 variants. That makes for fluid operation and the ability to switch between formats with no need to re-learn....anything. Ditto for most of the rest of the controls and function buttons.

I like the "night mode" on the G9 because it's perfect for shooting in a theatre with an audience all around me. I can see the menu items but the subdued reddish orange light of the screen isn't distracting or obnoxious to people adjacent to my shooting position.

The finder on the G9 has a higher magnification than the GH cameras and it's a pleasure to compose through. It's also a higher res EVF than is available on many other cameras--- at much higher prices.

The ability to now do 10 bit, 4:2:2 video in 4K, and write the files directly to one of the two SD cards in camera, is the feature that gave me the final nudge to re-buy the G9. I shot video with it yesterday and today and did some test editing in Final Cut Pro X. The camera delivers beautiful files! Really beautiful. And when I use the 4K, 30 fps setting the AF in continuous locks in on my face (I was my "test" subject) and stays there. I wish the camera was able to be used with the GH5 and S1 microphone interface/adapter for XLR microphones but that's a small ding to an otherwise really brilliant, little and adaptable video camera.

Plus, if I want to shoot in a way that might damage a camera during a video project (mounted on the front bumper of a Ferrari driving 120 mph?) I'd rather do it with this smaller, lighter and much cheaper package than to sacrifice a full frame camera and lens at double or triple the price....

The "larger" camera body means fewer issues with overheating while shooting 4K video which is something even the much, much more expensive ( and non-10 bit) Sony full frame cameras have yet to master. Imagine, they have to have a menu item the "allows" you to toast your camera. A "heat" setting that lets the camera disregard its high internal temperature as a sacrifice to your video vision. Better maybe just to make the camera with the intention to actually work for high data rate video. Sony is way, way behind Panasonic and Sigma in this respect.

The final reason to own a G9 (for me) is to have a light(er) weight street shooting/travel camera that offers world class performance when it comes to Image Stabilization. When using a compatible lens that also offers I.S. you get "dual-I.S." performance which can be as much as six and a half stops on stability improvement. The "tripod" mode is just science fiction scary.

To sum up: Great hand feel and operational sanity. Sensible and easy to understand menus. Great color and tonality in the files, from both video and photos. High-res mode to give you medium format resolution. Weatherproof lens and camera (took them both out in a thunderstorm this morning...). Operational buttons and menus aligned through the whole family of cameras, from the G9 all the way through to the S1R. A great selection of available lenses; some of which are downright mouthwatering. A great viewfinder. Best in class video which is only rivaled by the GH5 and the S1H. A current body purchase price under $1,000. A bundle with the very well respected Pana/Leica 12-60mm for under $1600.

I'll stop here to take a breath. I shot about 100 frames in the last couple of days and I'm back in the fold. Those who know me well predict that it's just a matter of time before I start looking with serious intent at the 8-18mm Pana/Leica and especially the 40-150mm f2.8 Olympus lens. The Pro version. Then I'll be right back in the mess.  I'd give you a link but you really should find your camera and lens on your own...that's part of the thrill... 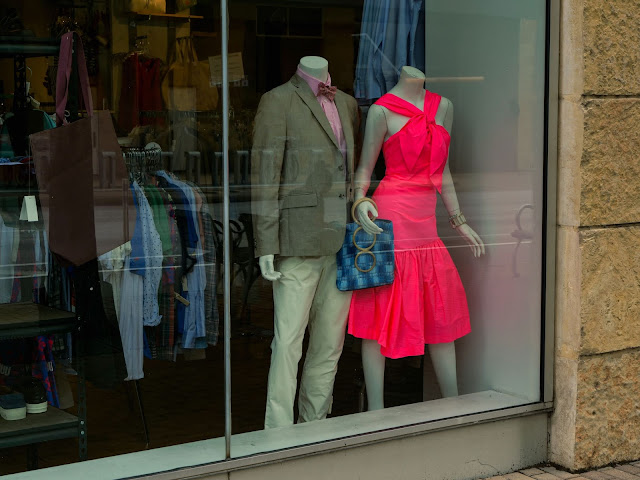 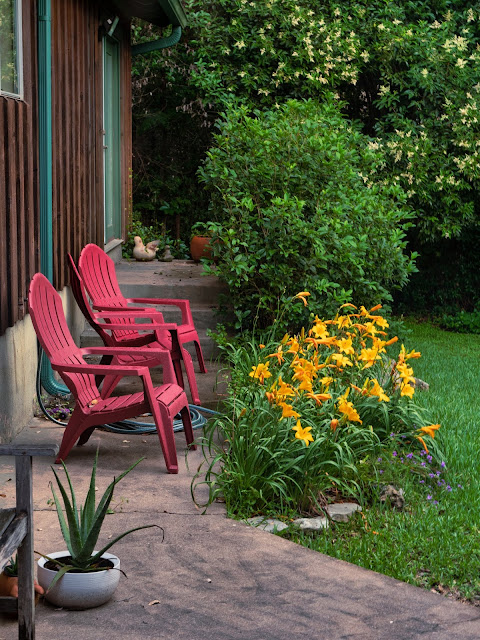 I was heading back in from swim practice and I looked through the double doors into the side garden this morning. It was cool and breezy and coffee actually tasted better while I sat in one of the red chairs and watched the sun come up. I guess staying home for most of the day isn't all bad. 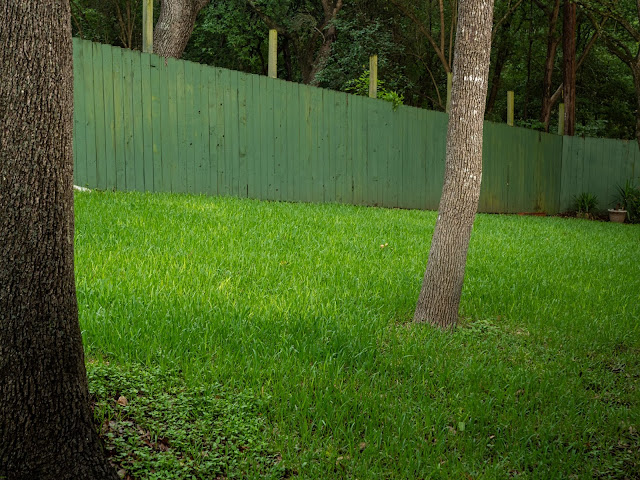 After coffee I walked around to the other side and shot out through the dining room doors.
I was able to handhold the camera for this image at 1/5th of a second. 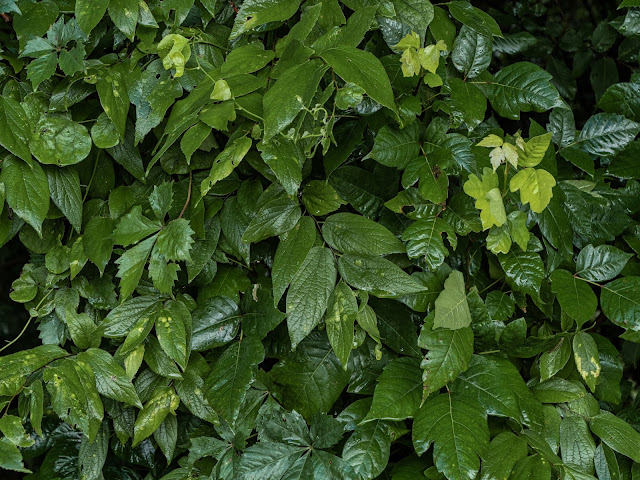 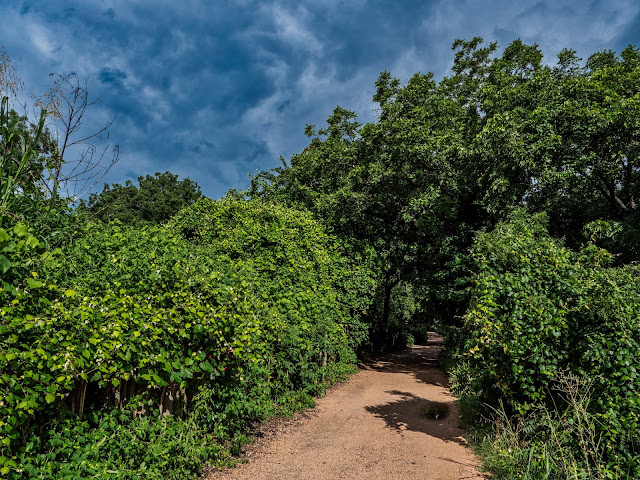 It was sunny about an hour after swim practice and I decided to go for a walk.
It took me five minutes to drive to Zilker Park and when I arrived I felt the wind
pick up and looked to the west to see big, black thunderclouds rolling in.
The rain hit a minute or two later so I stayed in my parked car and watched it all roll through.

Ten minutes later I was out on the trail and the morning looked like this: (above)

Then it all cleared up and started to look like this: (below) 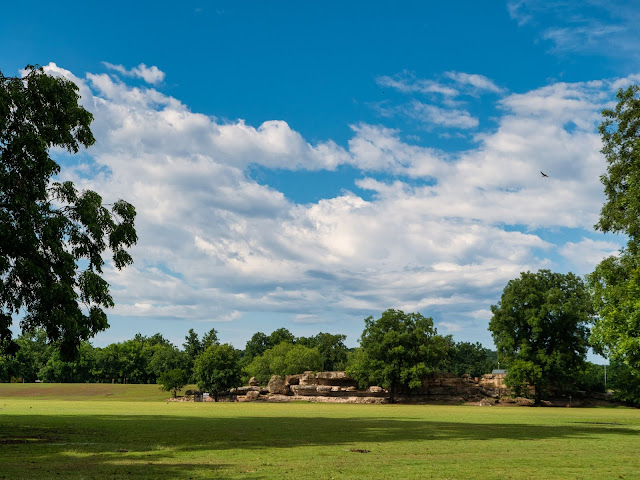 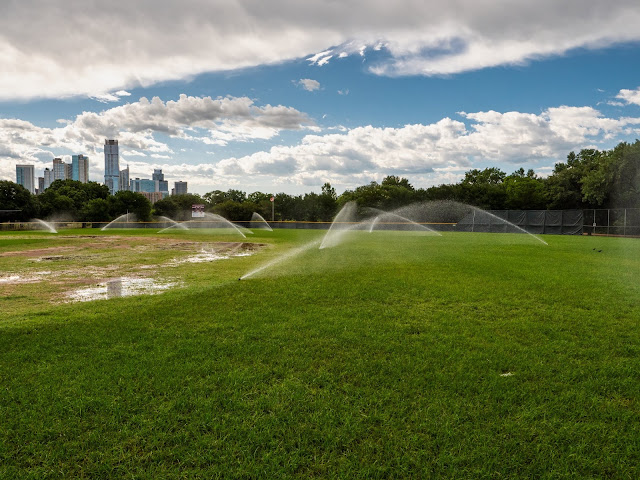 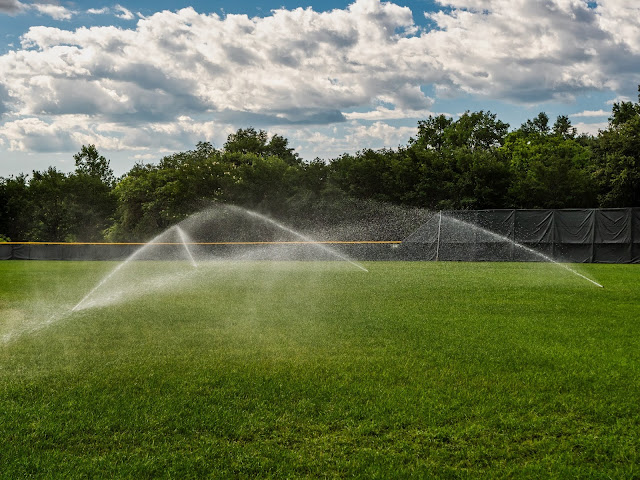 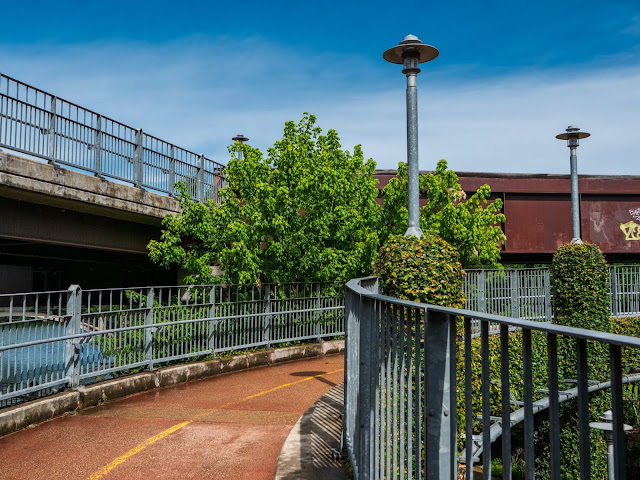 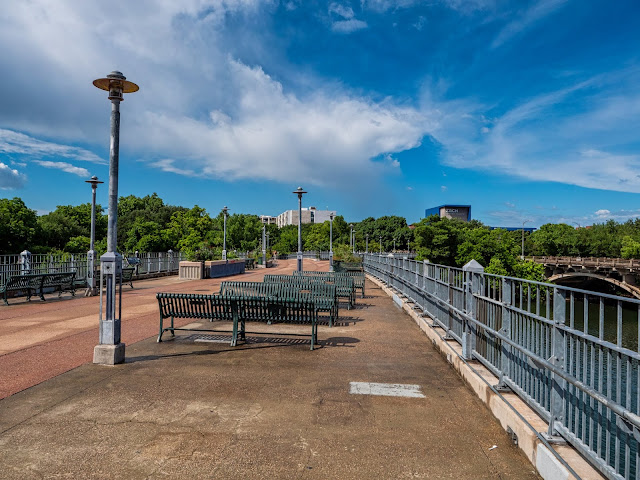 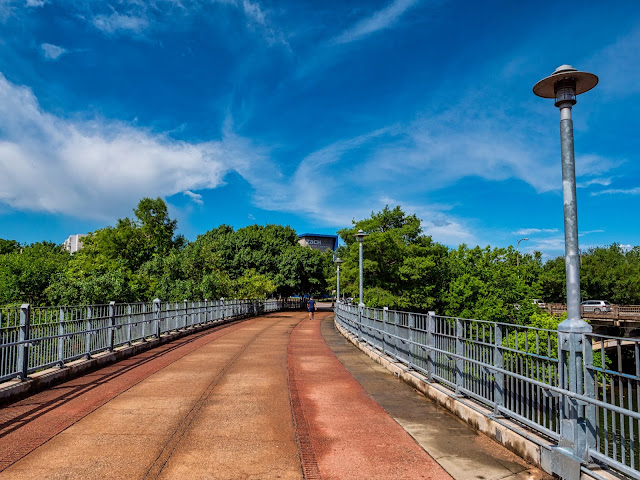 Posted by Kirk, Photographer/Writer at 21:00 11 comments:

May 2020 Reprint #2. Getting approval to take someone's photograph in a public space.


This was a very popular post when I wrote it back in May of 2011. I don't think much has changed but a lot more people are practicing "street photography" and I thought the content might be helpful for folks who are new to the genre. I tried to explain how I handle the balance between my right to do something and a subject's right not to participate. 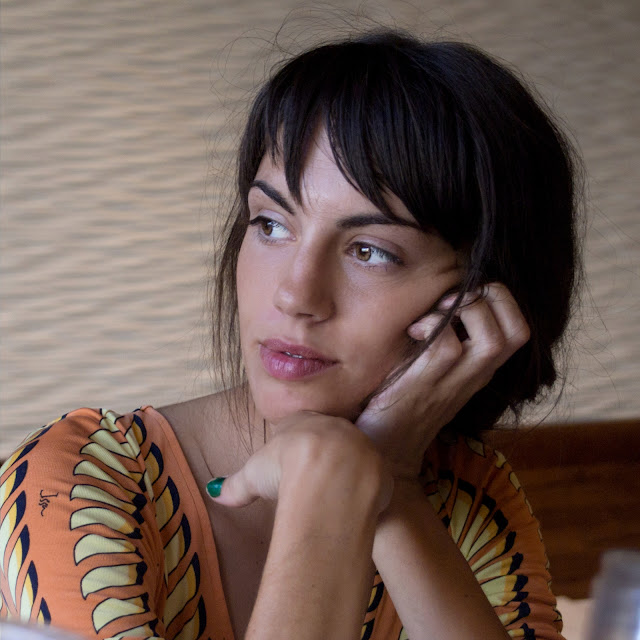