Okay. I'm convinced. I need a gimbal for moving shots. We never have time to lay down dolly track.... 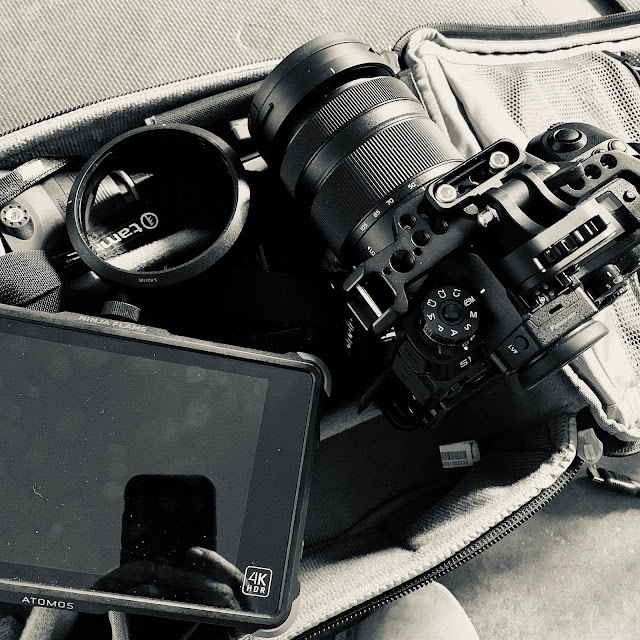 Backpack of gear for video. Moving quickly is sometimes important.

We completed our second day of video shooting for our Zach project today. Everything is working out okay but in this situation I am working as camera person instead of the director which means that even if I think lots and lots of moving the camera shots are...over done I need to be a team player and deliver what the director wants. After all, he's doing the editing and he's in charge of the style the Theatre will be presenting. And I volunteered so you kind of understand that you're not in charge... (hard for me).

The combination of the Lumix S1 and the 24-105mm lens gives me about 5-6 stops of image stabilization because the system uses the stabilization in both the lens and the camera body for more effective control. That's really great for hand held shots that are static or have slight (intentional) movement but no matter how much I practice I'm never going to be buttery smooth while moving backward with the camera while shooting video,  or trying to do a long tracking shot with the camera as opposed to a simple pan.

The director likes long tracking shots that end with me circling around the talent from a profile perspective to a "straight into the camera" perspective. That's a lot of movement and a thousand opportunities to glitch and wobble and generally screw up. In my early days of moving pictures we'd have a team of "grips" lay down dolly track and put a curve at the end to complete the movement. With a good dolly grip, a costly production team, and a $4,000 dolly we could do a rock solid tracking shot that curves into a straight-on shot at the end. With my size 10 feet and caffeine addled hands in control? Not so much.

We worked hard at it today and after two or three rehearsals and four or five separate takes for each set-up we feel like we got enough solid footage to make the moves work but boy-oh-boy it would have been much easier with a modern gimbal and smaller, lighter camera like the Lumix G9, with a little cine lens on it. I'm borrowing a Ronin S gimbal tomorrow and I've got a day or so to get up to beginner speed with it. I don't want to do anything super fancy I just want a smooth lateral move and a curve or two. Time to speed read those manuals instead of looking for a new movie to watch on Netflix tonight....

The director and I are plunging into the world of V-Log not so much by choice but out of necessity. We've got a big scene on a pedestrian bridge coming up at the end of next week and the head honcho for the theater decided that 8 am in the morning would be a great time to shoot a specific shot because, maybe, it won't be too hot in that last week of August. In Texas. Nice to think about the comfort of the talent but some thought needs to be given to the direction of the light as well.

Our big cast of singers and dancers will be coming across the bridge with the sun a little behind them and over to one side. Hardly the best way to light.....anything. We're testing out some V-Log files this week to see if we can make anything work (more dynamic range?) or if we need to go back and cleverly manipulate the ruling creative cadre into scheduling the giant, spectacular shot of our program at a time when the light is more cooperative. I get the impression that this effort to re-orient schedules based on lighting and time of day will be akin to turning an ocean liner around in the Panama Canal. That's why we're testing our file options well in advance.

I must, once again, sing the praises of the Panasonic S1 with the V-Log update installed. The files we're getting out of that camera (for video) are spectacular. No banding at all. I only get blown highlights when I've made grievous errors in judgement and the flesh tones are....to die for.

The combination of a variable neutral density filter and the safety net of the in-finder waveforms makes setting exposures a breeze and the camera, so far, has been rock solid. Occasionally we'll have a dancer who waves her hands in front of her face and we lose focus for a moment but since we're shooting in strong light and we can be down at f7.1 or f8.0 I'd be a lot smarter to just use the manual focusing on the camera. The ability to punch in before rolling makes for sharp images and the focus peaking during shots means we can make on-the-fly adjustments if we need to. Better than not knowing you went "soft" until you review the take.

We spent about an hour and a half shooting, reviewing and composing during the three different locations with three different talents today and I was still on the first battery as I downloaded video files to my desktop. I brought three batteries along, just in case. Someday we'll need them. I just know it.

I am temporarily becoming a video junkie and deep diving from subject to subject. A lot has changed since the days I when I was hauling around a Bolex Rex 5...  We'll be back to "real" photography in no time... Stay tuned.

Posted by Kirk, Photographer/Writer at 18:24 8 comments: