I love mixing stuff up. I shot the least obvious camera at the new show last night. On the high wire with no net. Also, OT: My run in with the dermatologist this morning... 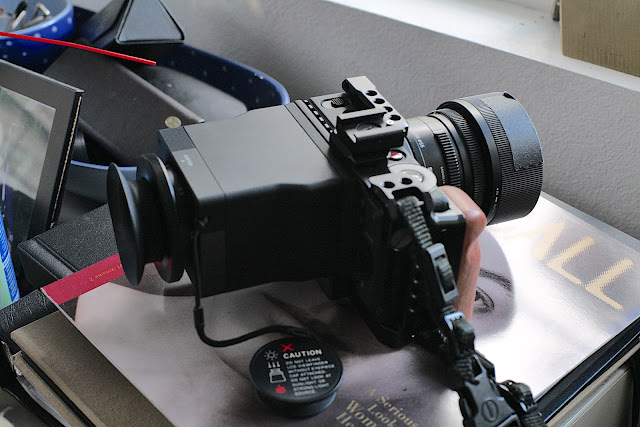 The fp is so unusual that it's cute.

I love to try new stuff even when I've got technical features figured out just right with the perfect gear. Sometimes I'm looking to see if a quirky camera adds something to the mix. Sometimes I'm just bored and want a challenge. It's a silly ass way to run a business but then again, not everything needs to be completely transactional.

You'll remember that I photographed at an outdoor concert last week and used a perfect combination of cameras and lenses. The unassuming Panasonic 70-200mm f4.0 S-Pro worked really well with the "low light monster" the S1. I also brought along an S1R with a 24-70mm for assorted wide shots and that combination worked beautifully too. By "working beautifully" I mean that the cameras were easy to use, trouble-free, transparent, and above all they generated beautiful files. So the obvious strategy for photographing a new show this week at the exact same location would be just to pack up the same gear, toss it all in the car and sally forth. Right? Well, maybe. But I rarely repeat myself and maybe that's a personality flaw more than a creative gesture.

But first a silly confession. I've been working with a Sigma fp since the holidays last year. I bought the big finder that attaches to the camera with a plate into which the finder is bolted. The plate is then bolted into the tripod socket and the whole assemblage makes for a tight fit and a tidy package. But it also means (at least I thought...) you can't use a cage with that configuration. I bought SmallRig cage for the fp and I fell in love with the wooden handle which supplies a generous grip on the right side of the camera. But I didn't see how to attach the finder accessory. I guess I didn't look closely enough. Then I ran into a fellow Sigma fp user who seemed to have it figured out. He had both the finder and the same cage mounted on his fp at the same time. He showed me where the cage had the same bolt sockets as the Sigma bottom plate. Now I could see clearly that the finder could be bolted straight onto the lower part of the cage structure and work as seamlessly as it did when using the other bottom plate.

I was overjoyed. Actually, I wasn't overjoyed, I was just momentarily happier than I had been a few minutes before.

Back to the story... Once I found out how to perfectly configure the fp (for me) I glommed onto it for the rest of the day and by the time I headed out to the assignment I had made up my mind to try to shoot the whole evening's event with it. Which is not a logical thing at all. The camera is slow to focus, the reviews on the fixed LCD are a blurry mess when they first come up on the screen and then take their time resolving into sharp images. If you punch in to manually focus with some magnification the magnified image sticks on the screen until you take the shot. There's no built-in image stabilization, etc., etc.

To make amends for the lack of in-body image stabilization I did everything with a stabilized lens (the 70-200mm) and then, since I was using the lens sometimes with the camera in the APS-C crop mode for longer reach, I hedged my bets by using the camera on top of a small (but good) Sirui tripod. I was rusty at first and nearly gave in to fear and uncertainty. I needed more practice on my manual focusing skills at the long end of a zoom lens.  I almost popped the lid on my Think Tank backpack and hauled out the ultra-trusty Panasonic S1R. But eventually I started to adapt to the camera, and to trust myself.

By the end of the hour and ten minute concert I had photographed the three singers, together and individually, in over 1,000 frames. Like I mentioned, I was hedging my bets.

I had stuff to do this morning so I was intent on post processing the files last night; before bedtime. The camera continues to fascinate me. Unlike the Panasonic S series cameras you can shoot RAW and in "crop mode" at the same time. With full frame you get a 24 megapixel file and with APS-C mode you get only 9 megapixels. But even at ISO 6400 the images are insanely sharp and noise free. I have a mix of Jpegs and RAWs as well as a mix of 9 and 24 megapixel files. They all worked interchangeably.

I really overshot the assignment and I ended up editing the take down to about 350 images. The colors and tones were wonderful. I tossed them up in a gallery on Smugmug, sent the link and the password, and headed off to bed. Now I'm over any reticence I've had about day-to-day use of the Sigma fp. It's obviously an eccentric choice and I would not counsel anyone to make it their "only" camera, but it's a nice change of pace from the more operationally competent and more traditional Lumix cameras.

With the big loupe, and mounted on a tripod, the camera and lens combination was actually more facile and fluid than I thought it would be in the shooting process. I also shot one song in the 4K, All-I, 400 mb/s mode and it was just great. I'll pass it along to the marketing folks for potential use in the social media.

The one aspect of last night's shoot that surprised me was that the Sigma fp shot lots of frames over the course of an hour and 15 minutes, all on one battery.

As you probably know I've lived in Texas for a long, long time and I've been swimming outside, year round, for decades. Many decades. Most of the swim workouts are in the mornings but I've done many more than my share of (sun drenched) noon and afternoon swims over the years. If you are of English ancestry like me you are probably light complected. Add in blue eyes as a risk factor and you are more or less just continually rolling the dice. Sooner or later a spot on your skin will emerge that makes you a bit nervous. Especially if you are a solid hypochondriac like me.

I see my dermatologist once a year for a full body check up. I see my general practitioner on the opposite six months to get his opinion and to create a prevention bridge so I don't usually go longer than six months between somebody checking me for cancerous skin damage. I'm an amateur; I can't tell and age spot from a full blown tumor...

I got a little spot on my face a couple of months ago and when it didn't go away I visited my G.P. He carefully inspected the small spot and decided to zap it with liquid nitrogen. A month later it came back and it was both a little bigger and now raised. I went back to see my doctor with the idea that perhaps another blast of the bracing liquid nitrogen might do the trick but he demurred and sent me scurrying to the dermatologist to have my new growth biopsied. (Biopsy is such a scary word...).

We never miss swim practice if it can be avoided so I hit the 8 a.m. workout and then showed up at my dermatologist's office at the stroke of 10. He laughed at me for smelling like pure chlorine and I had to explain that because of the pandemic we couldn't use the showers at the pool for the moment. Although I'd done a quick and very chilly rinse off with a garden hose...

After appropriate small talk he gently jabbed me with a small needle to deliver a local anesthetic and then scrapped off the growth with an insanely sharp scalpel and finished up by cauterizing the wound. Now I have a round Bandaid(tm) on my left cheek. My first question for him was whether I would still be able to swim tomorrow (see? it's all about making fitness a priority!!!). He allowed that it would be okay as long as I used a waterproof Bandaid over the area.

He's sending the offending tissue off to be analyzed. If it's just a wart or actinic keratosis then we're all done and no more torture of your favorite blogger need be done. If we turn a different corner then I get to go to a specialist and have Mohs surgery performed on the area. You know, it's the "gold standard" for getting all the nasty stuff out to the margins. That might require a bit more recovery time outside the pool so if the dice go that way just prepare yourself for three or four, long, rambling blogs a day while I whine about inaction and soreness.

Wear your wide brimmed hat in the sun. It's a crap shoot but you might as well cheat the house in your favor, right?

Now whining to my family about my ordeal; hoping the sympathy will mask the expense of a new phone.

Posted by Kirk, Photographer/Writer at 14:48 9 comments: