A quick set of observations about the Panasonic S1H and the newest Sigma 85mm f1.4 Art lens. 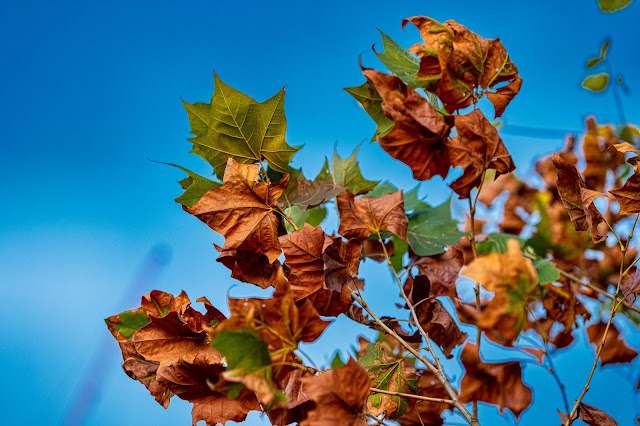 Autumn leaves in Austin.
When I got back from swim practice yesterday morning I got right to work updating the firmware in four of my Panasonic cameras; in all three of my S1x cameras and also a nudge forward for my (wonderful) G9. The updates were quick and easy and I encountered no snags. By mid-afternoon I'd finished all my busy work and realized that while I have used the S1H for five different video projects I had, in fact, only put about 400 frames of photographs through the camera since I purchased it. I thought it might be a good afternoon to evaluate it as a still imaging camera instead of only viewing it through the prism of video.
Another recent piece of gear that hasn't gotten enough of a workout was the new version of the Sigma 85mm DN DG Art lens. This was a good opportunity to split two atoms with one electron so I checked the camera for battery freshness and memory card occupancy and headed out to walk on my usual walk.
The day started out gray and chilly but by four in the afternoon the sun was dominant and the temperature climbed back up to the low 80's. I left my phone at home, dialed in the camera's diopter, left my glasses in the care and went out as low profile as I possibly could. It was nice to be untethered from the hive.
When I started taking images with the S1H two things struck me on the first little burst of frames. One was how crisp and color-rich the images were; even with the standard profile engaged. The other was just how solid and well damped the shutter noise and operational noise of the camera was. It is easily the heaviest of my recent cameras and I think that even includes some heftier models like the Nikon D850. I like the density, heft and outrageously good build quality of the S1H but I don't think I'd tip over into the morass of excess and put a battery grip on this one unless I'm shooting video anchored to a tripod and need a long, long run time.
The finder on the camera is exemplary. I thought this might be one of those instances where the camera maker tweaks the EVF to make images look better than they will in real life but when I brought the photographs into Lightroom they matched the camera looks without lifting a finger to intercede.
Weight and bulk aside this may be the nicest camera I have ever used. It does make me wonder if the Leica SL2 could possibly be even better....
I love the 85mm focal length on full frame. I bought the original L version the 85mm Sigma art lens and the image quality was amazing. Just amazing. But the darn thing weighed about 35 pounds and stuck out from the front of the camera at least a couple of feet (hyperbole alert!!!) and after trying to casually carry it around it had be consigned to "paid job" or "studio only" duty. Not a good thing for such a flexible and muse-like focal length.
I'm glad I traded the original version in for the latest one because it's Lilliputian by comparison and seems to me to be equally sharp. Of special note is the external/physical aperture ring which I have come to adore on the Panasonic Pro lenses as well.
I tried to stay in the nonsense apertures all afternoon and early evening yesterday. Most of the images shown here were shot at f2.0 or 2.2. Sometimes I got crazy and went all the way to f4.0 but that was only in photos where I wanted to see more and more instead of less. 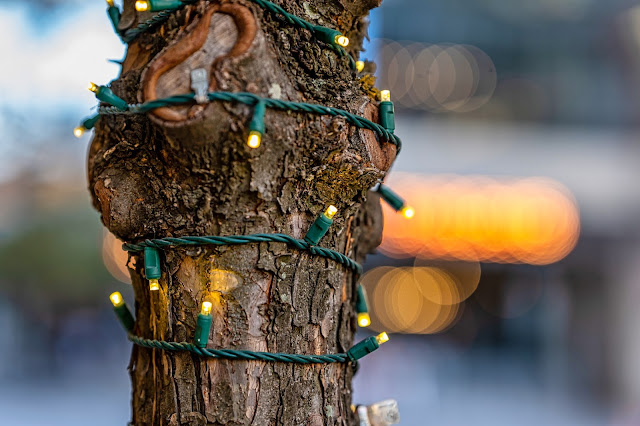 Perfectly round bokeh "balls" in the background. Nice. 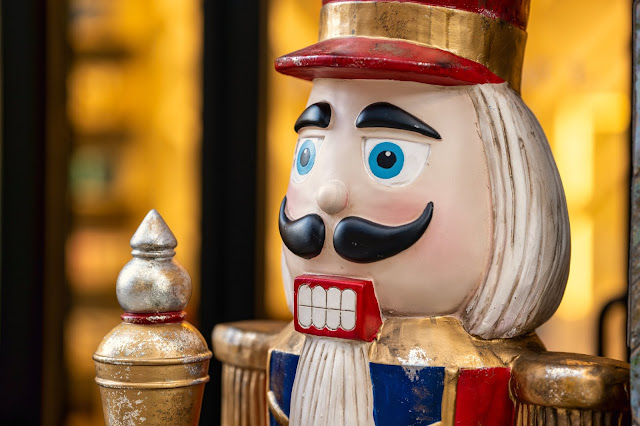 Happy close up performance and mellow background bokeh add to the lens's charm.
I've started to trust my Panasonic S1x cameras more and more and none better than the S1H. In a break with all past history I've actually started using Auto ISO and I don't care where it lands, up to 6400, because I know it will be as saturated and noise free as the cameras I thought were great but only usable at 200 ISO.
I've also found that I like using many of the L-mount lenses manually. While the Sigma is MF focus by wire it's well damped and doesn't overshoot like crazy. It does a dignified march to your optimum focus point. I have the camera set, when using manual focusing, to show me a magnified section of the frame when I grab the manual focusing ring. Using the "punch in" you really know when you've nailed the perfect focus.
I also have the camera set up so I can push the AF button on the back of the camera and have it override the set MF to auto focus. When I release the button the focus remains glued into place. I don't use the back button focus when I use the camera's regular AF. It's just not a habit that's been ingrained yet.
I didn't take a tripod with me but I did continue shooting after dusk. The combo of a great sensor and a fast lens, along with good IBIS meant that not having a tripod along for the ride wasn't important and didn't affect my photos.
All in all it was a fun afternoon and I'm over the moon with the S1H. I was already in love with the lens.
Swimming: A little over 3,000 yards in the pool this morning. A decent amount for the 50 minutes I invested. I'll bracket the day with another walk this afternoon and then we're scheduled to have Thanksgiving (Thursday) and Friday off from swimming. TRAGIC! But there it is.
I'm on schedule to get five more days of swimming in before I go in for the Mohs surgery next Wednesday. I'm trying to put a lot of yards in the bank to tide me over for those seven doctor-mandated days of aquatic deprivation. Working on a work around already.
Click on the images to see them bigger. 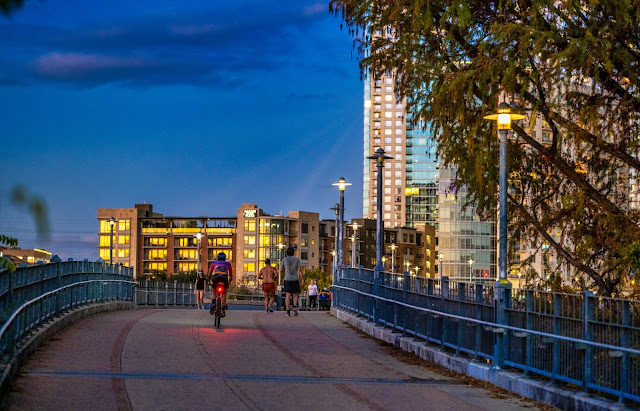 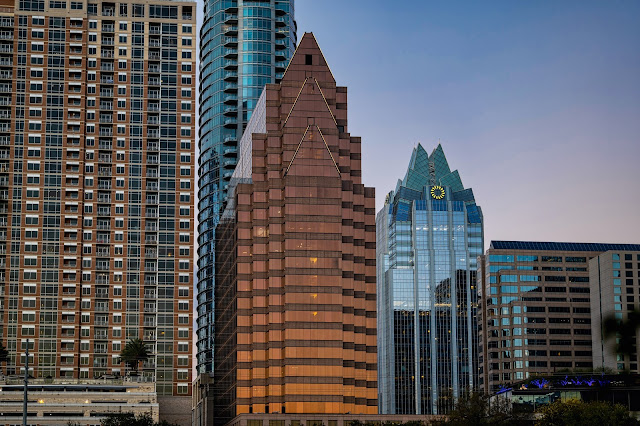 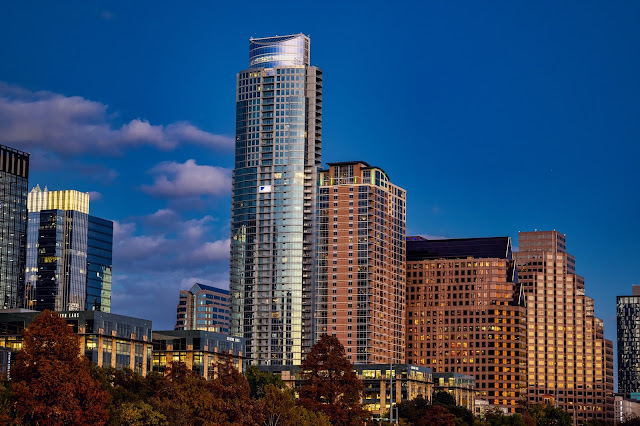 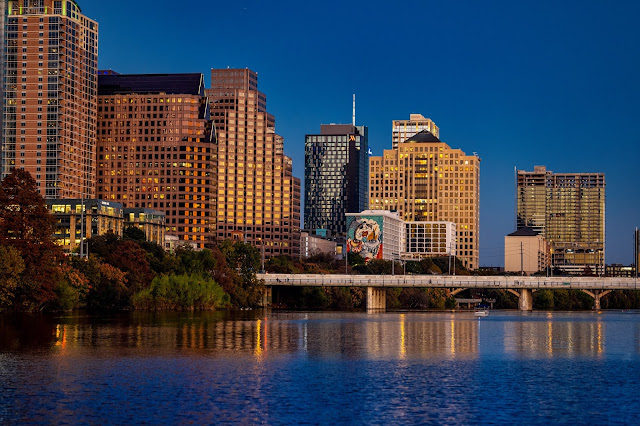 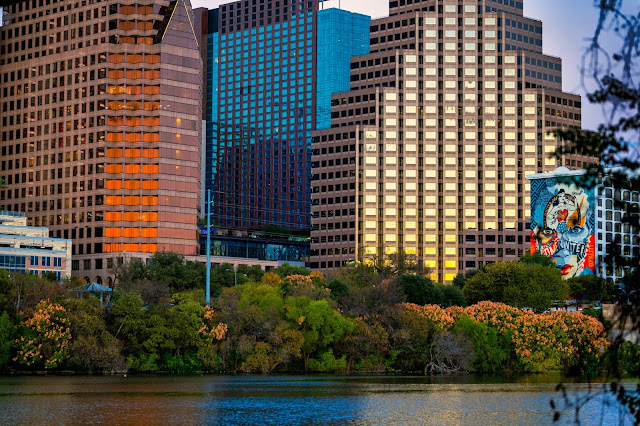 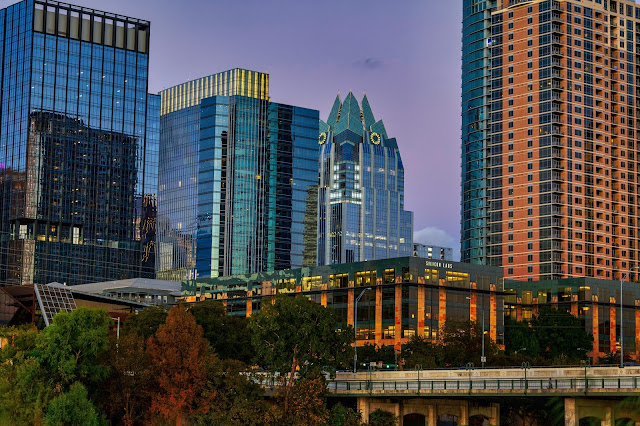 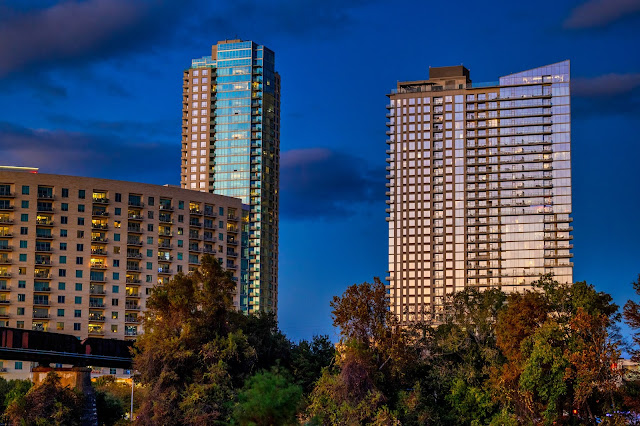 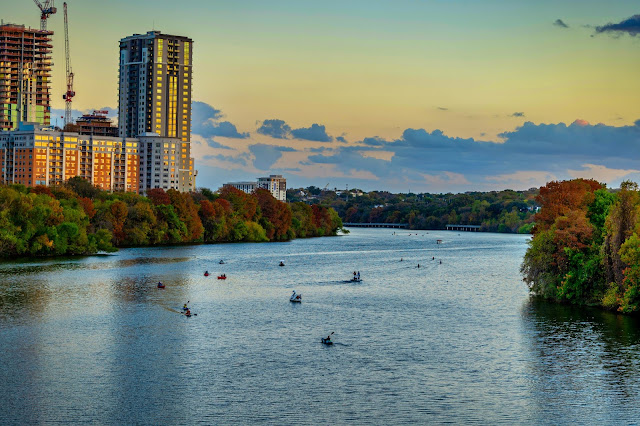 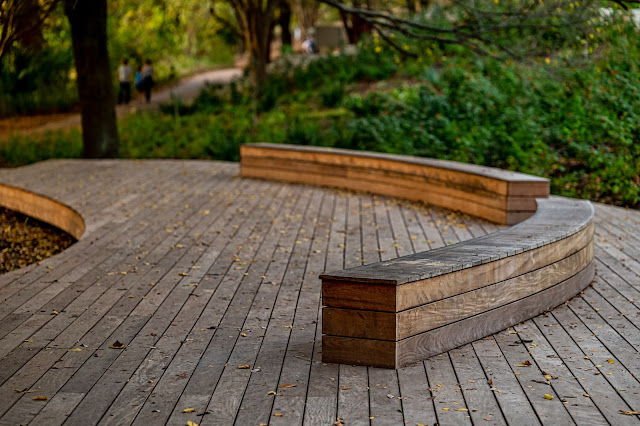 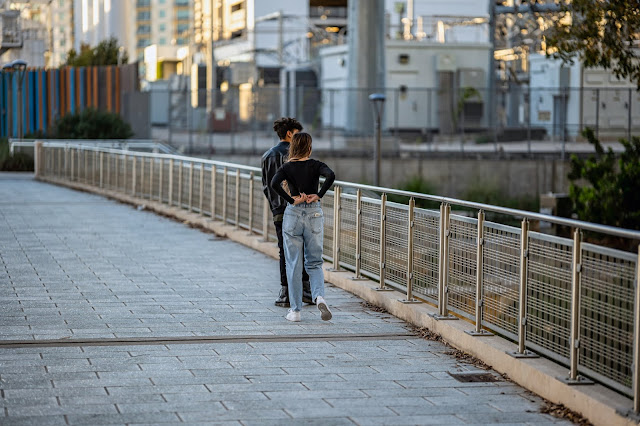 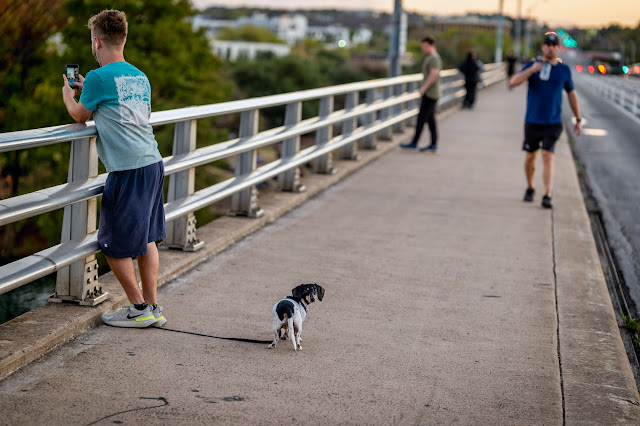 Walking over Congress Ave. Bridge. Zillions and zillions of bats live underneath and come out at dusk to look for mosquito snacks. People are getting ready to try and capture images of the fast moving aerial experts with their phone cameras. 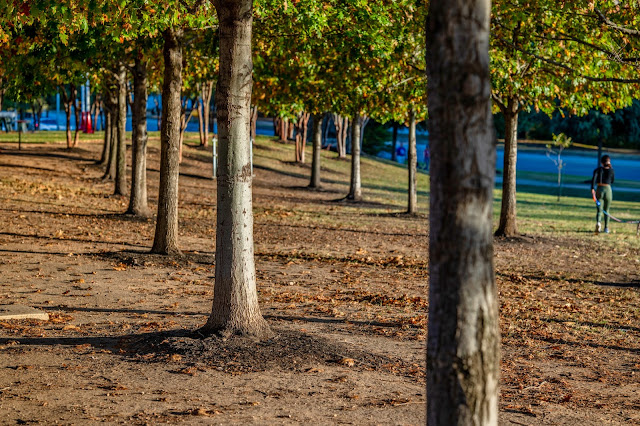 OMG. Kirk does a landscape. Kinda.
Posted by Kirk, Photographer/Writer at 12:13 8 comments: