Spending time with a very enigmatic camera. One that's both potent and at the same time "under-spec'd" for a photographer. 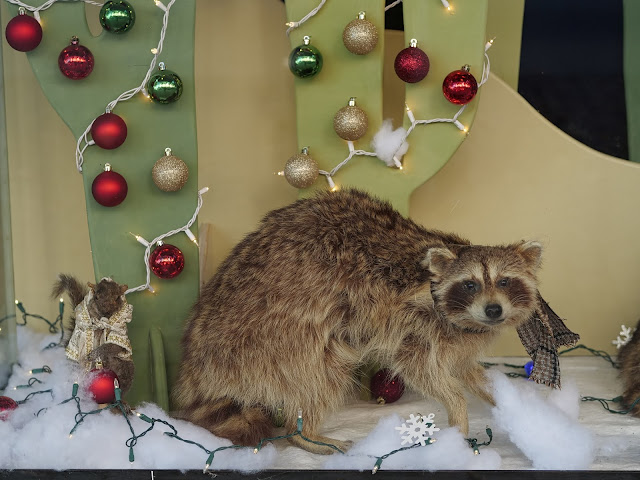 this window on 2nd St. is a Holiday Display for a law firm. Interesting.
I bought a GH5S camera recently to use on video projects. We'd been doing work that required our video camera to be on a tripod and to run for anywhere from an hour to an hour and a half without stopping or overheating. The GH5S is actually considered a "pro" camera by Panasonic and it was the perfect tool for the job. In fact, after the first go-round I made it my flagship standard for work not requiring in-camera image stabilization. In most of these projects it was one of three Panasonic cameras rolling simultaneously and it matched the look and feel of the GH5 and S1H pretty much perfectly.
I've been shooting a lot of full frame stills lately and I decided to change things up on my walk today and take something in the micro four thirds range. I was all set to head out the door with the G9 or GX8 until I glanced over and saw the GH5S lingering on a case, wearing its battery grip. I put the little Sigma 56mm f1.4 on it and exited the studio.
The reason I say the GH5S is under-spec'd is that the sensor resolves all of 10 megapixels. In an age where our full frame cameras start at 24 megapixels and cap out at 47 megapixels the "paltry" 10 megapixels seems insufficient. And I guess if I were out shooting landscapes or incredibly detailed tableaux I'd find it to be lacking.
But the reality is that the camera's sensor produces amazingly sharp and detailed files while adding an extra "snap" that seems to be missing from more muscular cameras.
I shot sparsely today. I had a lot on my mind. I was mulling over a client situation in which I could have acted better. Not necessarily my fault but perhaps my response was out of proportion in the moment. At any rate that's one things walks are good for; introspection and a calm distance to parse stuff. Unlike our world leaders I am not adverse to apologizing where appropriate...
At any rate I was curious to see how much post processing I'd end up doing to the files coming out of the camera so when I got back home I made some coffee and sat down to play. Amazingly, none of the files I selected could reasonably be improved by my attempts at enhancement. They looked perfect right out of the camera. I'd shot Jpegs and was a bit surprised to see that the colors and especially the acutance of the files was just what I wanted. I've included a few here but no doubt Blogger will compress and darken them to take some of the glamour away.
The funniest part of the shoot was my brain's insistence of shooting everything at f2.0. Everything. I was impressed at least as much by the lens. I think the sharpness at a nearly wide open aperture is pretty much state of the art for a short telephoto lens.  Take a peek. See what you think. Click the files to make them bigger. 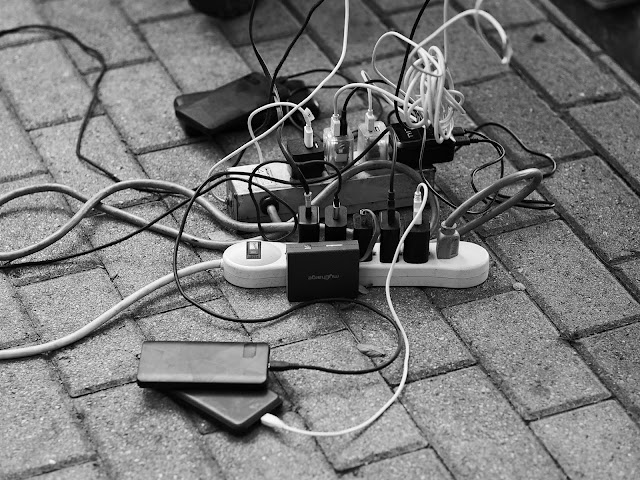 I met a guy named Shawn who had six or seven various vintage iPads on his bench.
At his feet were all these chargers and battery banks. We chatted for minute. 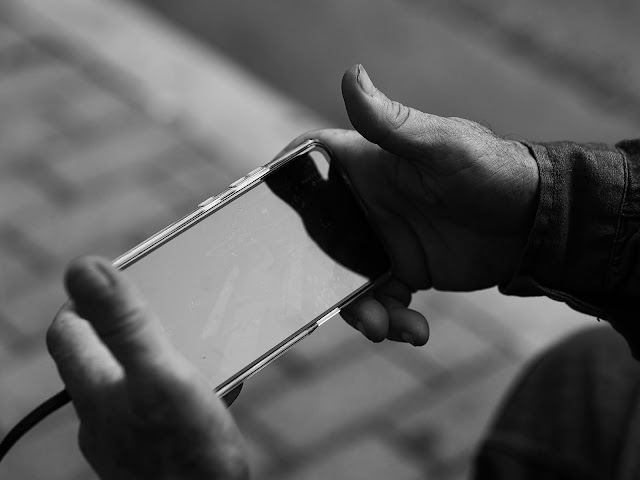 I asked him which was his favorite among the iPads. He pulled a phone out of his pocket and
said, "I like my new, 5G phone best." Shawn comes downtown to charge stuff on the
city's dime and then goes home and plays with the gear. 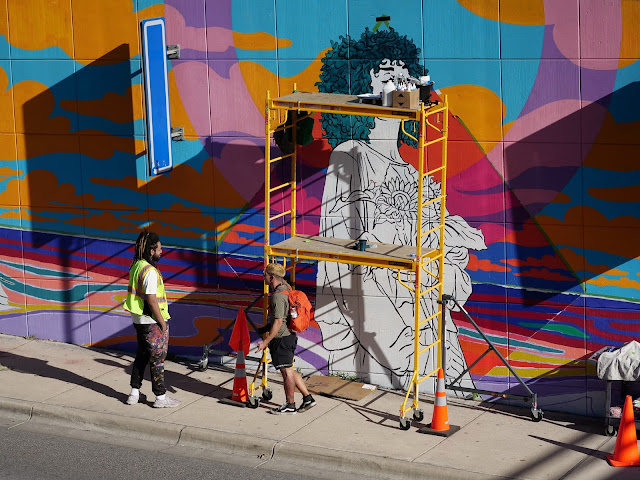 More mural painting under the 2nd St. overpass at Lamar.
I was nervous for the artist when he climbed up on the very narrow
scaffolding. It seemed precarious to me. 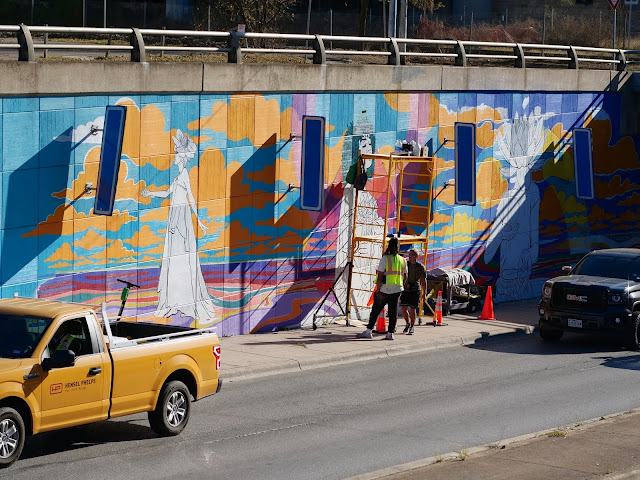 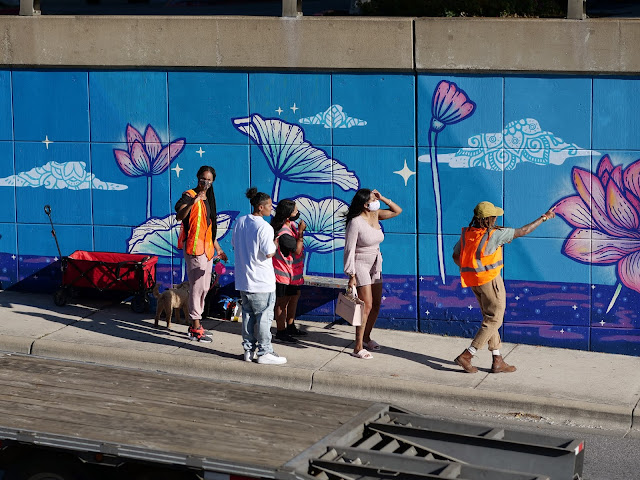 Another painting crew on the other side of the street. The murals are fun. And bright.

That's all I've got. Don't "hold any thoughts" on my account.

Posted by Kirk, Photographer/Writer at 18:43 4 comments:

My long awaited preview of the Leica SL2-S.

The SL-2S has been announced. According to the press release from Leica it will basically be a collage comprised of the guts of a Panasonic S1 and the body, styling and color science tweaking of the previous SL2-S but with the white logo switched out to black logo type on the front of the pentaprism.

A few small video details have been upgraded.

Leica has made cameras for a number of years. Many were good. The lenses are supposed to be really, really nice. Some are.

The products are relatively expensive for normal people but are well priced for the luxury market at which they are aimed.

With the exception of earlier M models and most screw mount models the products have a lower than average history of reliability.

There. Was that so hard?

Posted by Kirk, Photographer/Writer at 09:34 10 comments:

Eight minutes of posturing and pontificating to get to the point of talking about a camera the reveiwer had never seen in person. Breathtaking. 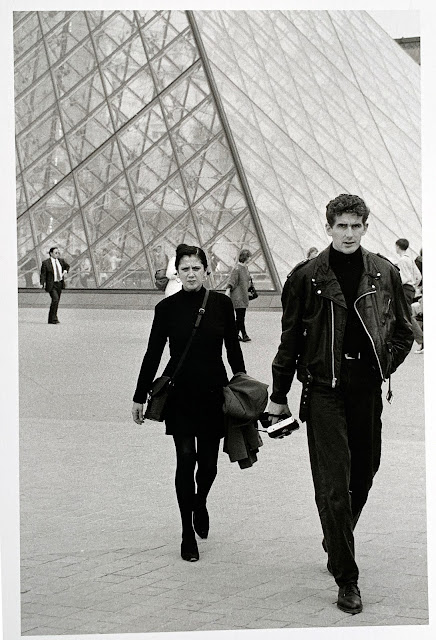 I was lured over to Hugh Brownstone's YouTube channel today by a tag that indicated the subject would be the newly announced Leica SL-2S. If web-info can be believed the camera is basically a Panasonic S1 with  a custom body and some little software touches to tweak the interpretation of the final images.

I presumed, given his much trumpeted relationship with Leica (free trips, lots of loaned test cameras, etc.) that he'd have substantive things to say about the new camera. Color me unamused that he spent a the first 8 minutes and 14 seconds giving us another in a series of overly hashed and overly re-visited stories about the early years of Leica. The faux history lesson was larded with an enormous Hugh-narrated ad for some sort of online service to which I paid no attention.

I skimmed to the 8:14 mark, guided by his sponsor's watermark on the corner of the screen and prepared to hear something new and different about the product only to be given a press release version insulated on all sides by a smug projection of familiarity with the camera that was wholly unearned.

The argument, of course, is that all YouTube videos are less about learning and information delivery and more about entertainment, and I can't argue with that.

Sometimes Hugh can be quite entertaining but the  schtick is wearing thin and the callow disregard for the viewer's time in this instance was poignant. Time to become choosier about what sort of YouTube material I look for. Another one off my list.

Posted by Kirk, Photographer/Writer at 09:27 12 comments: