Is Panasonic the most responsive camera maker today? Or did they just scramble to fix a big mess up? Hmmmm. 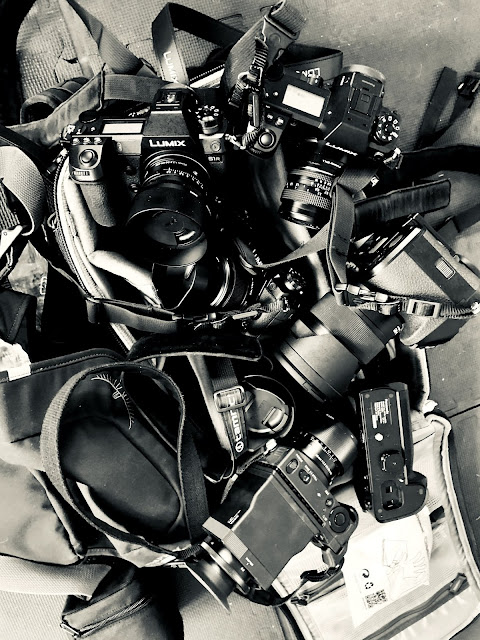 Back on November 22nd (2020) Panasonic rolled out firmware upgrades for all three models of their S1(x) cameras. Along with the assortment of added features such as 5K video in the S1R, they made major upgrades to their auto focusing capabilities which were intended to make the cameras much faster and better at all manner of AF. But there was just one teensy-tiny problem; the upgrade basically broke all of the cameras' autofocus when used in non-continuous lighting ( LED, Fluorescent, etc.) which manifested itself in a dramatic way.

When you attempted to focus a scene lit by those light sources the view in the EVF was a bright, flashing mess and the camera basically gave up focusing entirely. At first I didn't experience this because I was mostly shooting in daylight where there was no issue.

I was made aware of the problem on the L-mount forum on DP Review. Once informed I walked into a fluorescent lit environment and was instantly able to duplicate the issue. A few intrepid camera testers discovered that having the 120 fps refresh rate set in the EVF exacerbated the problem and that reseting the refresh rate to 60 fps was helpful. But the problem was still there, even if diminished a bit.

The same bug in the firmware hit all three of the camera models; the S1, S1R and the S1H. As I'm not booked on anything for paying clients right now I didn't descend into sheer panic mode but I've been carefully watching to see when Panasonic would rectify this really huge stumble. The cameras were rendered almost entirely unusable by this flaw and I think anyone invested in the system and heading into any mix of holiday projects must have been sweating bullets. You might be able to "get by" with the 60 fps "fix" but if you've spent well over $10K on Lumix gear I don't think "get by" is much delivery on the promise of the system being a "professional" tool set.

A glance through the inter-webs this morning let me know that now, one month after their catastrophic misstep, Panasonic has delivered newly updated firmware. It's 1.7 for the S1, 1.7 for the S1R, and 2.3 for the S1H. I've done some preliminary tests with some old and nasty fluorescent fixture I have on hand and it looks to me like the issue is resolved. More testing will be required so I'll make a point to go back this evening to one location I stumbled across that made my viewfinder flicker and pulse like strobe lights at a bad night club. Only then will I give my final stamp of approval.

So, is a month fast for an emergency firmware update? Was it a laudable effort at fixing something? I guess so but I can't understand how a firmware update that breaks such an important feature got out of the lab in the first place. I guess the intern who tests these things was on vacation...

Just wanted to let everyone know who might be affected. Hopefully this new update will fix the flicker without taking away the two steps forward we got in our camera's focusing speed and accuracy.

If you have an S1 then this is a good place to start: https://av.jpn.support.panasonic.com/support/global/cs/dsc/download/ff/dl/s1.html

If you are looking for the S1R or S1H update then just use the link above and add the correct letter to "S1" near the end of the link.

Posted by Kirk, Photographer/Writer at 11:48 4 comments: