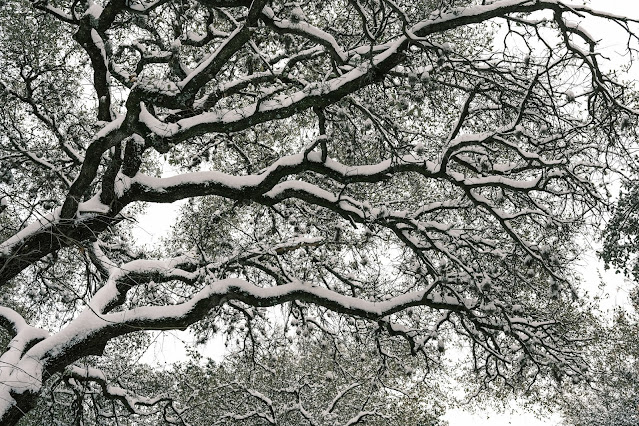 It was amazingly cold when I got up this morning but the television newscasters tell me it's going to be even colder tonight. Then we have three more days that are warmer, but still below freezing, to look forward to. I re-wrapped and re-insulated exterior pipes today, resuscitated a toilet and created some wind breaks to lower the likelihood of more damage from wind chills that are forecast to be anywhere from minus five to minus 15 degrees over night. But I count myself among the lucky Texans. We still have power, we still have a functional, gas powered furnace and we still have running water throughout the house. We're working on rehabbing the exterior faucets as well.
I did have the foresight to buy two pounds of organic, medium roast, Columbian Supremo coffee just before the roads became impassible and we're pounding through that with reckless abandon. The fridge and pantry are fully stocked so we're eating well and could probably shelter in place for a couple of weeks before running totally out of provisions. Our supply of wines is also adequate. And yes, we have chocolate.
After getting everything as well set as I could I bundled up and took advantage of the warmer temperatures near the end of the day and walked up to the small shopping center at the end of our neighborhood. I once again brought along the Fuji X100V and was very pleased with the color and overall look of the casual files I made.
I have a number of friends who've been unfortunate enough to have lost power in the middle of the night last night. It's 11 pm here and they're still waiting for power, or at least an estimate of when their power will be turned back on. I'm learning that, in some respects, old tech can be better than the latest stuff. Case in point. My friend Paul lost power late last night. His water heater is one of the "on demand" heaters. It uses gas, like my old fashioned water heater but it requires electrical power to control temperature and maintain safe operation. No electricity, no hot water.
The city of Austin and ERCOT, the body that controls electrical distribution in Texas, have totally dropped the ball in this emergency. They originally stated that they were going to do rolling black outs which would last only 45 minutes per area. Once they got into the process they found that they couldn't bring people back on line because they'd actually lost, across the state, the ability to generate enough electricity. This was not a case of downed power lines that got iced up. They just didn't push all the smaller generating parties to adequately winterize, even though it's a mandated part of the program. Seems like someone wanted to save a bit of cash and now something like 2.5 million people in the Lone Star state will spend a couple of nights with sub-freezing temperature and absolutely no heat or lights. Sitting in running cars to charge cellphones has now become an Austin thing.  Heads should roll for the lack of oversight, but they won't.
In a nod to basic survival the city and county have opened up one on the big, municipal convention venues, the Palmer Center, as a heating station for regular people who just happened to have found themselves without heat and without other options. Wouldn't you know it? The hotels booked up quickly. Especially the nice ones.
It really sucks but you can't really push back on Mother Nature, and ultimately, that's the real problem here. 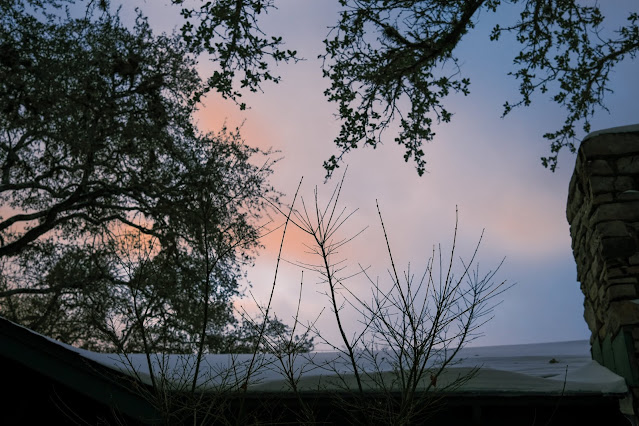 This is the last image I saw before I walked in the door and called it a night.
Looking west up over my front door. 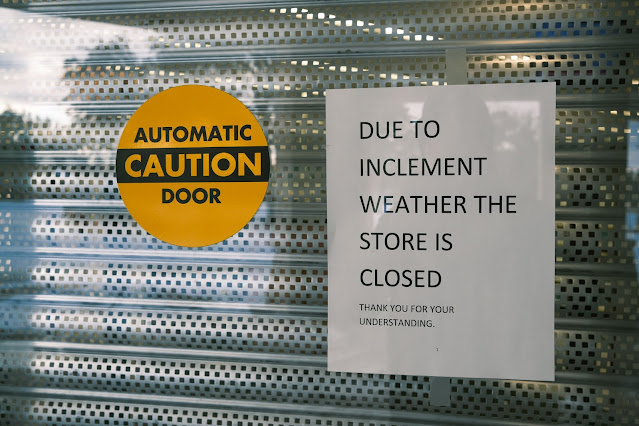 This was the sign on our neighborhood Walgreens Pharmacy. 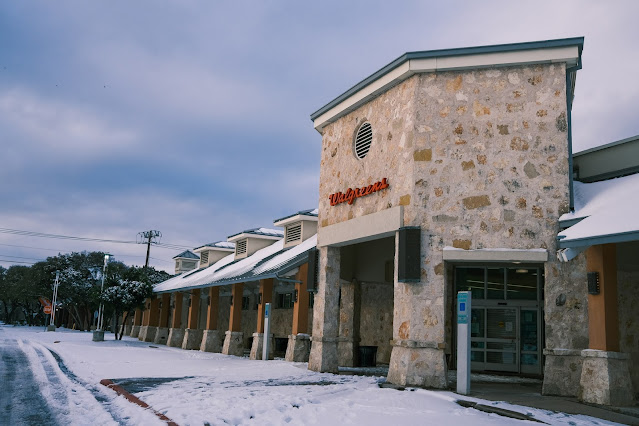 This place is normally quite busy but every shop was closed and it was like a ghost town. 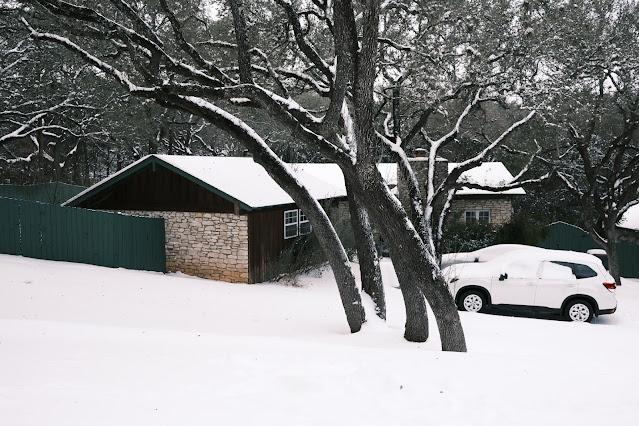 This is our place. The building in the front, just left of center, is my office and studio.
It's a nice space with lots of room but the one thing we never invested in was a good
heating system. I guess that's going to change now. 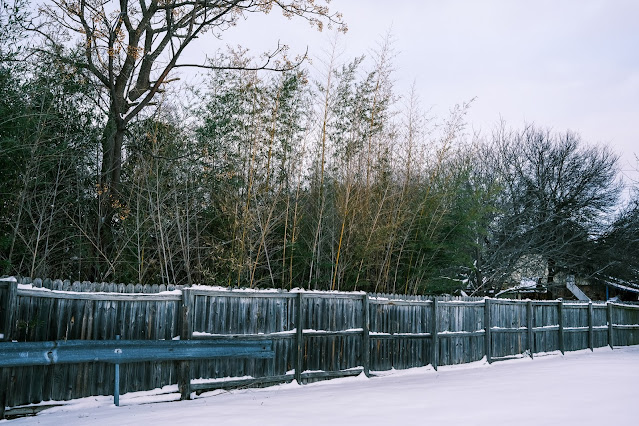 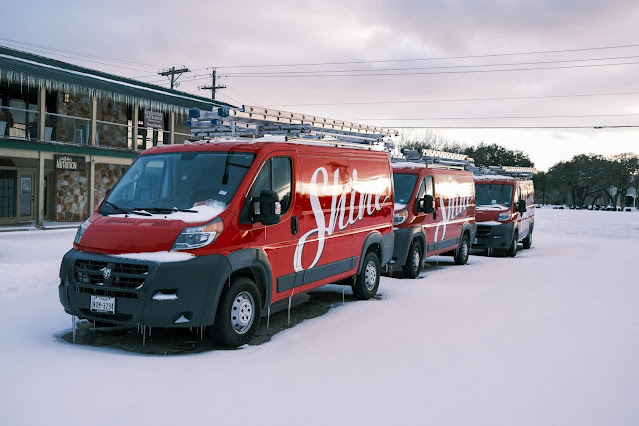 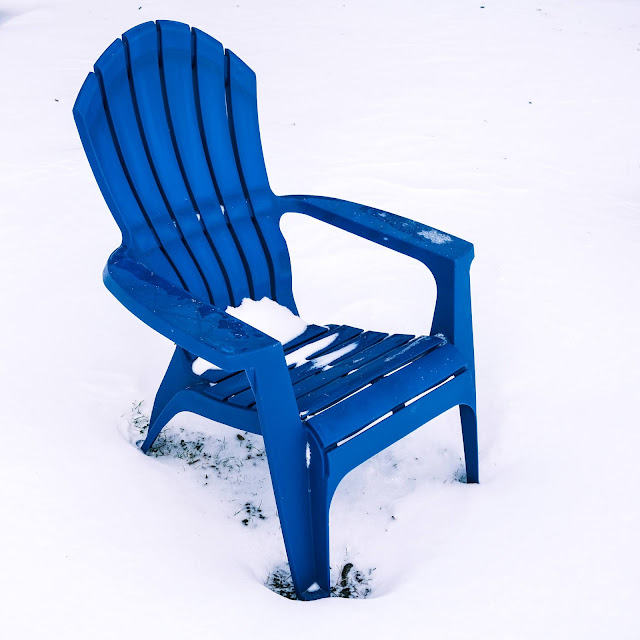 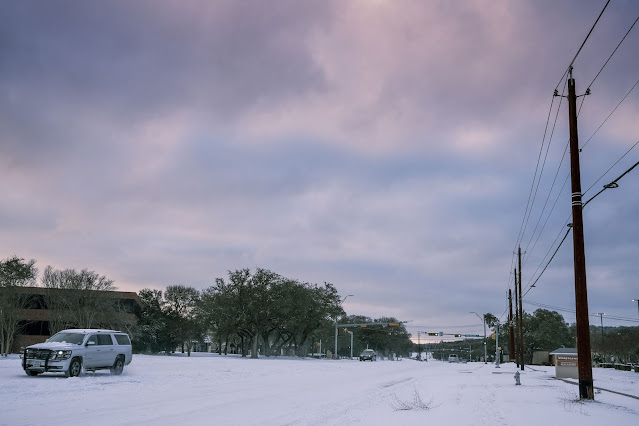 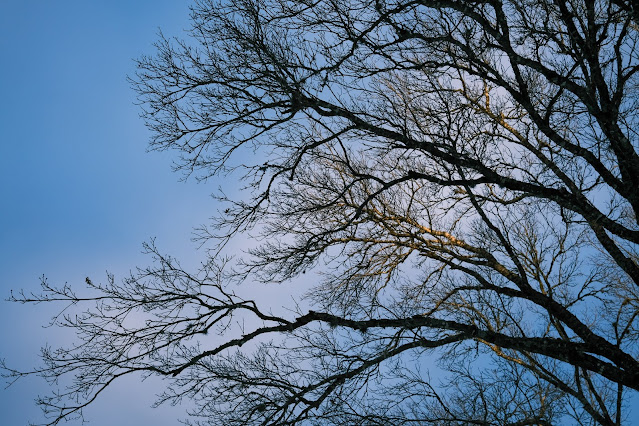 I feel so powerless in situations like this. I'm waiting for the big thaw to see how many pipes will burst and how quickly I can turn off the main cutoff for water. Then we'll need to join what I think will be a very long queue to find a plumber. I'm sure it's going to take some time so I'm already looking at hotels because I don't think, at this stage in our lives, that we really want to go days and days without plumbing. Not to mention that we're still socially distancing because of the pandemic.
But as Belinda constantly reminds me: It could be a hell of a lot worse.
Leave those faucets dripping and pull out the down comforters. I can't imagine how people dealt with this kind of stuff 100 or 200 years ago. At least I've got some fun, weather resistant cameras and lenses to play with.
Be safe and warm. Lights out. KT

Posted by Kirk, Photographer/Writer at 23:19 14 comments:

Walking in a Winter Wonderland (and freezing my butt off.....) with a nice, easy to use camera. 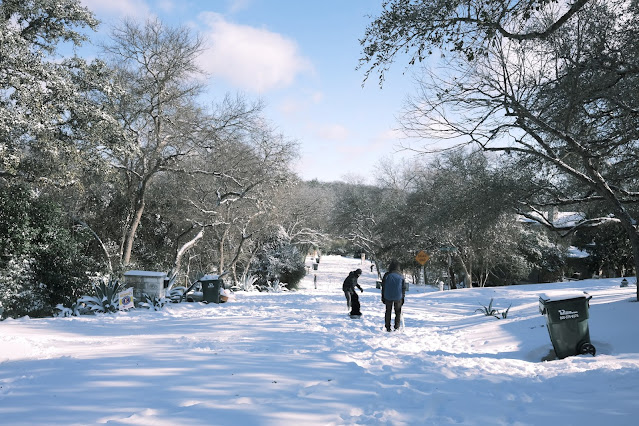 I bundled up and headed outside this morning. It was a "balmy" 12° Fahrenheit and the wind was whipping around but I was determined to get some photographs of our record snow storm and deep freeze. I had two cameras sitting on the dining room table and it took me a few minutes to decide which to take. On one hand there was the Leica SL2 and a 45mm f2.8 Sigma lens. On the other hand there was a Fuji X100V. I decided to put the X100V in full program mode and take it because it's so easy to use as a point-and-shoot camera.
When I stepped out the front door I noticed a pile of snow in front of the office door. The bank was about 3 feet high and I used a broom to brush it all away. I wanted to check and see how my office, the hot water heater and the utility space next to the outside wall with all the pipes running through it had fared overnight.
Before I closed up and came in last night I placed the little radiator heater in the utility space to help keep pipes and stuff warm. A quick check with the digital thermometer said we were nestled right in at about 78° this morning which meant the small space with the good stuff was just right. The studio and office space was about 45°. I won't be working in there today because it would take a lot of energy to heat it and we all need to conserve. There are currently long, rolling blackouts across Texas. The utility space is less than 100 square feet, well insulated and separated from the office by solid core doors. The little heater didn't have to work hard too keep that space from freezing.
I ventured out in the snowscape and was immediately surprised when my hiking boots sunk down a full foot and a half into the snow. It was deeper than I thought it would be!
I know this all sounds a bit silly to people who live north and deal with this for months at a time but it's different for Texans. I think. The cold is like evil magic to us and we don't have the metaphoric strands of garlic to ward off its curses.
I'm glad I took the smaller camera with me because shooting in the cold with gloves on is crazy. All I wanted to do was push the shutter button halfway down, lock in the exposure and focus and then push all the way down. Sounds simple but the bigger your gloves the warmer your hands while the bigger the gloves the less haptic feedback there is on a shutter button. The Fuji works well in fully auto mode and I know the camera quite well by now which makes the whole process less thought intensive. Somehow, when it's too cold my brain seems to go all reptilian and thought processes slow down to a crawl. I tried to concentrate on showing what my neighborhood looked like the day after our record storm but ten minutes out my toes, nose and fingertips started their whiny protests and I called it a day and marched, slid and trudged back to the house.
After 20 minutes in 12° I expected the battery to be diminished but was happy to see all the indicator bars present when I got back to the house. Just before I walked in the front door I remembered about not bringing a highly chilled camera into a warm house (and, with all the power outages I was definitely hoping it was still a warm house!) so I stopped by the car to grab a plastic bag in which to wrap the camera for decompression and condensation protection. If any one is keeping track I took the black one out today, hoping it would absorb heat from the sun....Yeah. Right.
When I got home my fellow home residents informed me that one of the toilets was non-functional. This was something I had been dreading. I used the bucket flushing method to clear out the bowl and then got to the problem discovery part of the adventure. Yep, the toilet sits next to an outside wall and shares a cold water pipe with an outside faucet. Even though the faucet was wrapped and under styrofoam it seemed to have frozen over. It took the rest of the pipe with it...
So I did what any photographer would do and grabbed a monolight from the studio and focused its 150 watt tungsten modeling light on the pipe that extends in from the wall to the toilet intake valve. Then I went back outside and went insane on re-insulating and re-covering the outdoor faucet. Layers of bubble wrap, Polartec, styrofoam, foam insulation, duct tape and mylar all covered with a waterproofed cardboard box filled with construction insulation. Two light stands, wedged against a wall hold the huge melange of insulation firmly in place.
About two hours later I checked to see the progress of the rogue toilet and was enheartened when it flushed normally and then also refilled normally. My family actually gathered around and cheered. It was so great to have a ready and appreciative audience for one of my few plumbing successes...
A few hours later and I'm thrilled to report that it's still functional. And nothing is leaking.
At sunset today it's forecast to be 18°. By midnight the forecast is 10° where it will stay for the next eight hours, with brief flirtations with 8 and 9 degrees. Then we warm up a bit tomorrow afternoon (if we've survived) and the day will cap out at 34 °  just before delighting us with a few more sub-freezing nights. This is just incredibly insane. But there it is. My deepest wish, in the moment, is to not lose power. I'll light a candle to the saints of electrical power generation, just to hedge my bets....
Here's some hasty photos: 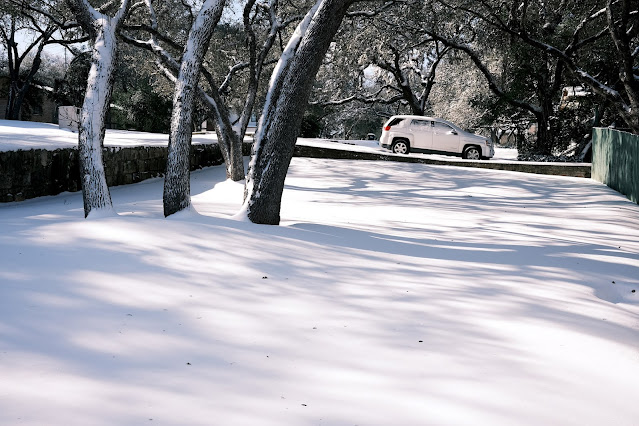 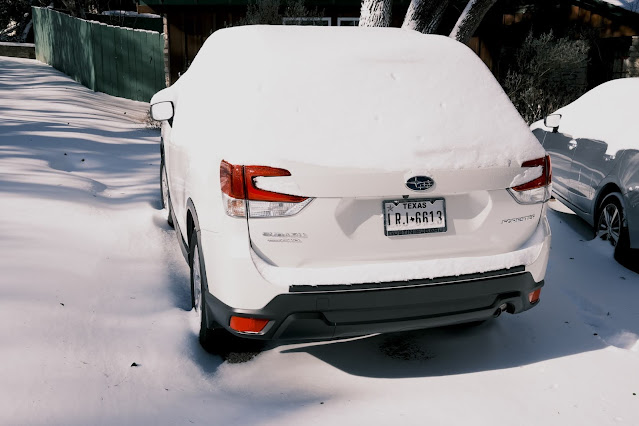 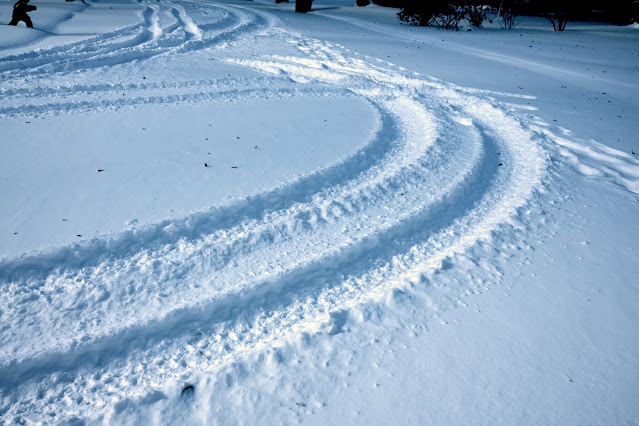 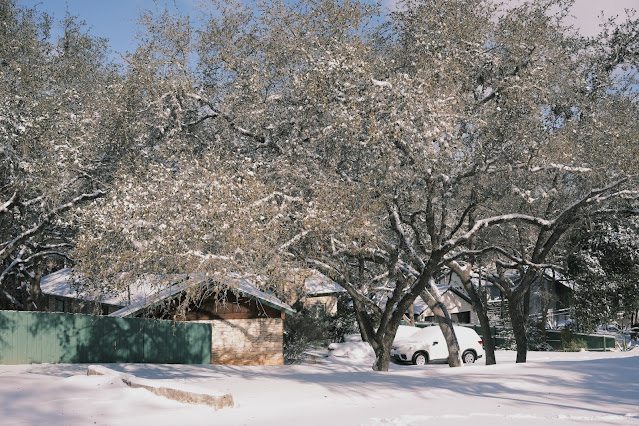 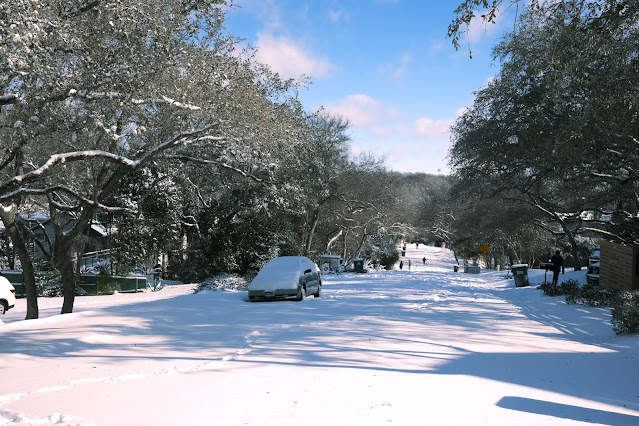 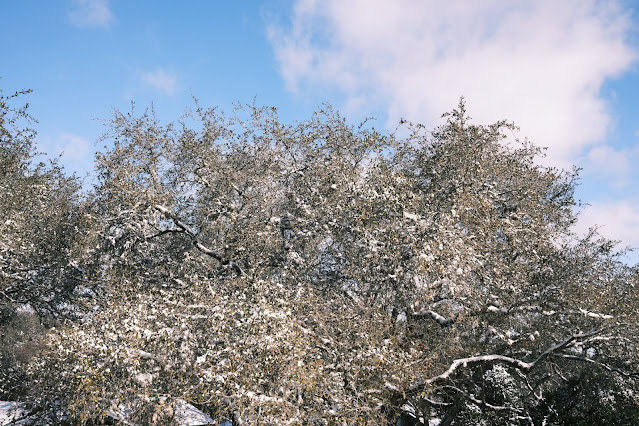 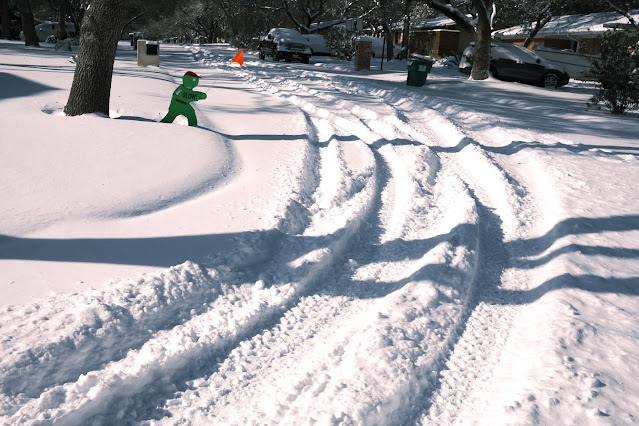 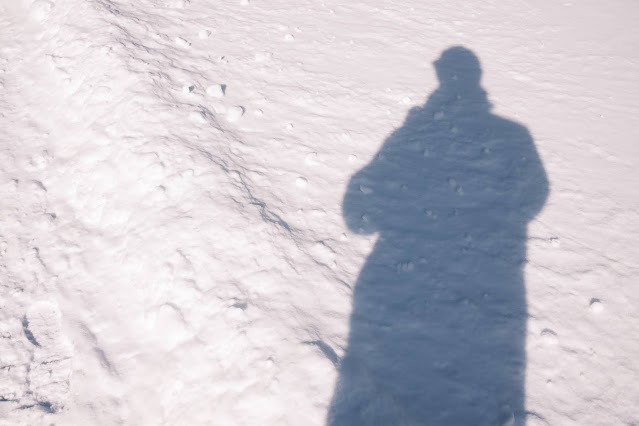 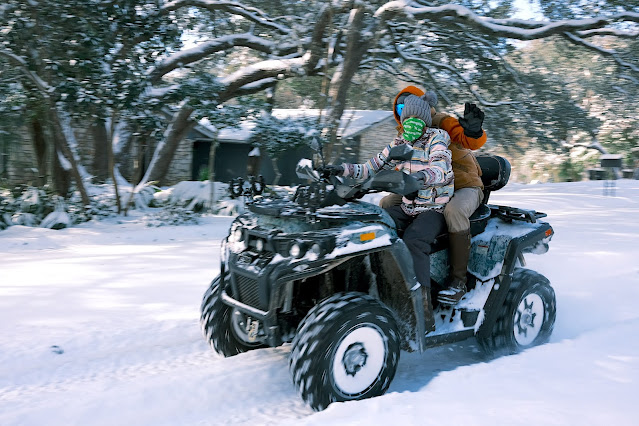 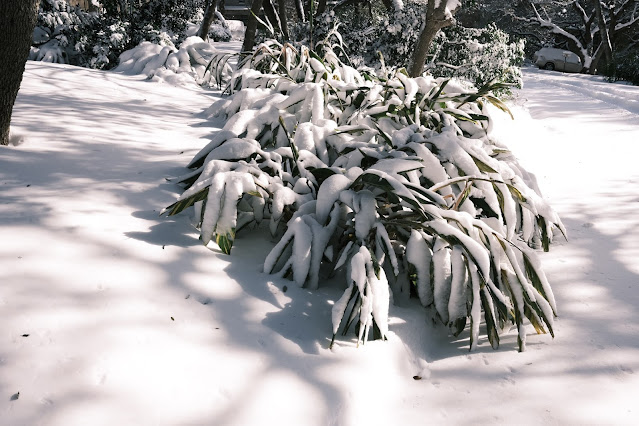 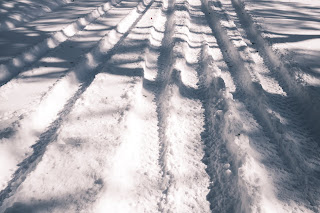 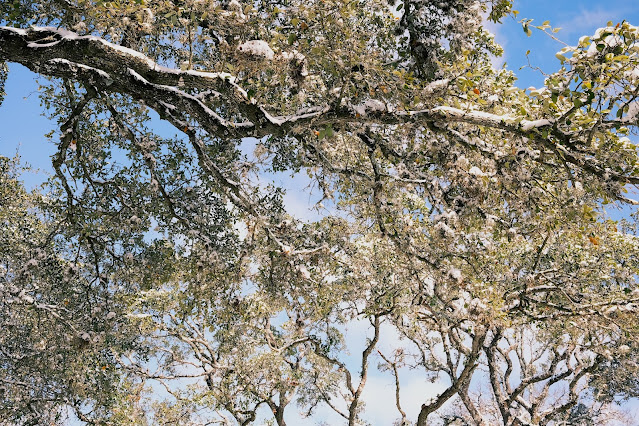 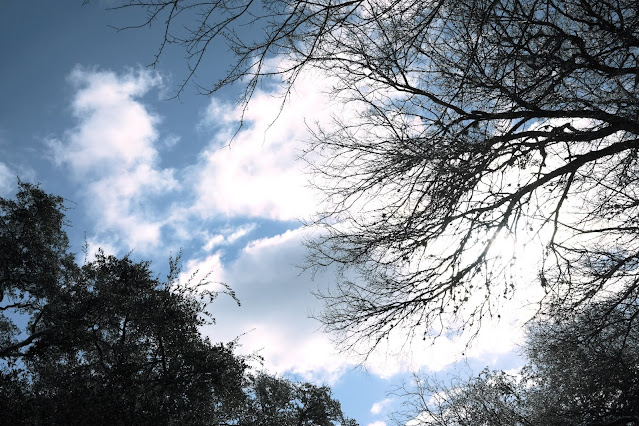 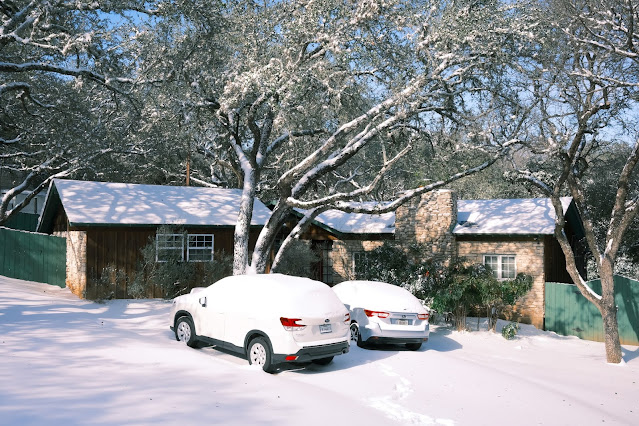 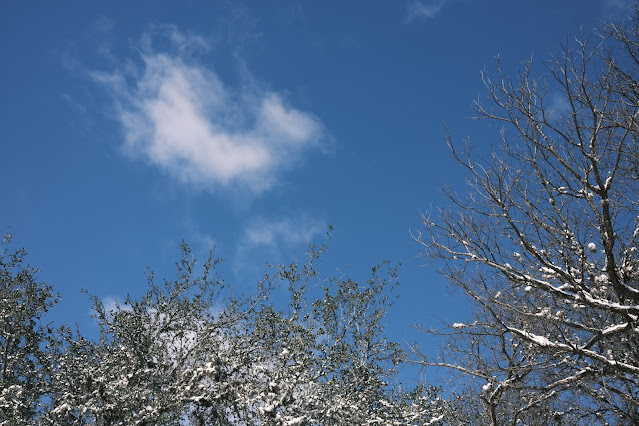 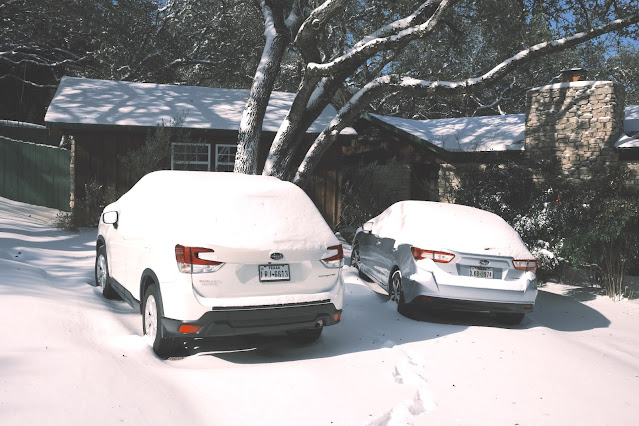 As you may have surmised, it's impossible to drive right now.
And, it seems contraindicated to be outside.
I'll go with the flow and hit the couch with a good book.
Stay safe. Stay warm.
Now, who is supposed to send the St. Bernard with the little cask of brandy?
I'll be waiting by the front door.
Posted by Kirk, Photographer/Writer at 14:23 14 comments: