My ambulatory testing of the Panasonic Lumix 20-60mm lens. With support from the Leica SL2. Walking off the effects of the vaccine... 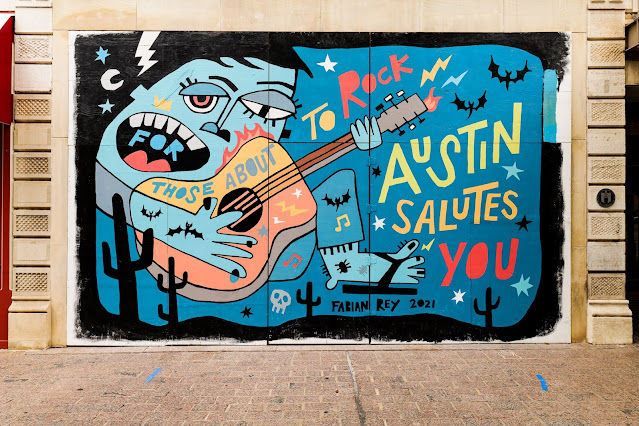 I've had none of the sinister side effects from the Moderna vaccine that I hear so much about. I'm about 28 hours out since getting the shot and I'm happy not to be suffering. But I did have one side effect that dogged me all day yesterday. I'm not sure it's totally a result of the vaccine since I had trouble sleeping the night before (rare for me) but after I came home I was incredibly sleepy. I took a nap for half the afternoon and fell asleep on the couch after dinner while trying to read a book. I went to bed early and slept in a bit later than I normally do. That's it. That's what I've been dealing with. But, since I didn't schedule anything else for the second half of yesterday or for all of today it's not like getting some extra rest is an inconvenience. Also, by way of supplying additional data: my arm is no longer sore. Unless something untoward occurs I'll be thrilled to be back in the water swimming tomorrow morning.
Okay. I wrote yesterday about my change of heart about pursuing all the super high performance lenses and decided to be more measured and scientific in my approach to lens acquisition and use. Part of this new "restraint" comes from bountiful successes with ancient Contax/Zeiss lenses and partly from the realization that I've been carrying around the "prime lens prejudice" since the film days. And it seems to be mostly an irrational carry over of lens preferences from the days before every (every thing!) got so good.
With this in mind I've started paying more attention to one particular, inexpensive but good zoom lens. It's the 20-60mm f3.5-5.6 lens that I picked up from someone else's "kit dissection" during the recent S5 camera craze. I think we have a tendency (at least I do) to sometimes dismiss a lens out of hand when  popular and well regarded reviewers drops remarks about the corners being unsharp or the build quality of the lens (as if they'd taken it all apart and assessed each component under their microscope) isn't up to their standards. But I convinced myself, at least in this instance, that I'd just go ahead and buy the lens and see for myself what the fuss or non-fuss is all about. 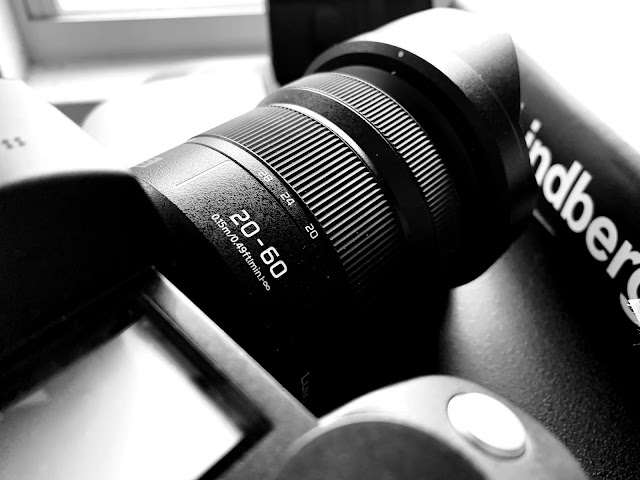 I've been walking around with the lens all week.  Here's what I like about the lens in general: It's mostly plastic so it's half the weight, or less, than the 50mm f1.4 S-Pro Lumix lens but it covers focal lengths from 20mm (as wide as I like to go --- comfortably) to 60mm which is a good, long normal focal length for me. The lens is chubby instead of long so it looks well proportioned on the SL2 body. The zoom ring is very smooth and well laid out. It's got a long throw and the focal length markings are well spaced out around the barrel of the lens. This makes it easy for me to set a focal length of something like 35mm and pretend that I'm shooting with a single focal length lens. I like having a AF/MF switch on the lens barrel so I can quickly change between the two settings without having to hit the menu or find the right switch on a camera body. I like that the lens hood locks on and has a button you push to release it. This means far fewer episodes of the lens hood dropping off the lens at an inopportune moment, clacking loudly on a concrete floor and then rolling under the theater seat in front of me or under a table at a social event. Nothing like crawling around on your hands and knees trying to find your lens cap to make you look like a real pro... especially while the keynote speaker is at the podium.
Finally, I like that the lens is slow (smaller aperture). I guess that doesn't make any sense but a slower lens formulation might be much easier to both design and also to manufacture well so my rationale is that image quality doesn't need to suffer much when a camera company is trying to hit a certain price point.

The only thing I don't like much about this lens is that it trombones as you zoom to the longer focal lengths so it does increase in length. If I'm not actively observing the tromboning I don't really care. It just looks funny when you are sitting around playing with the lens and getting to know its feel.

For the kind of found scene photos I like to take it focuses quite quickly and silently. I've loosened up my stance on slower lenses for another reason; cameras like the S1, S1H and the Leica SL2S are all low light monsters, capable of being used at ISOs like 12,800 with very little image degradation. At least very little that I notice. Now that the constraints of noise have been largely removed from our gear (across nearly every line of cameras) the differences between fast and slow lenses start to blur and then the only difference becomes...the blur.

With wider focal lengths such as the range on this lens, or the native focal length on the Fuji X100V, I've started really embracing the idea of getting deeper focus. Shallow focus and wide angles of view are rarely as convincing an effect as I want it to be and I'm starting to consider the teeny-tiny slice of sharp focus with massive blur in front and behind to be the provenance of the longer, faster lenses. If you like the super-blurry background/foreground effect you'll get it with much more ease if you stick with super fast 50mm lenses, very fast short tele lenses, like the 85mm f1.4s and then just about any lens longer than 100mm with an aperture of f2.8 or larger.

Today I mostly set the 20-60mm lens to f8.0 and left it there. If I moved in close that aperture worked to give me a sharp main subject and a subtly blurred background. If I moved further away from the main subject I got more and more of the overall frame in focus and this worked well for me.

Even though it is considered a venal sin in some circles I did use the camera in Jpeg today and I cranked down the resolution to "medium". My idea was that the reduction in size would both reduce noise and increase overall sharpness and, secondly, that I'd spend much less time futzing around with the enormous 47.5 megapixel files in post where they would end up needed to be reduced for web use anyway. I'm pretty sure 20 megapixels will give me enough quality on the blog....

When I actually looked at the files at length I was quite happy with the results. The lens didn't disappoint me with its corner performance and I found most of the frames to be snappy, contrasty and filled with juicy detail. In all it's a lens that I'm using more and more of the time.

Next week, when we're photographing models for a very large medical devices manufacturer, I'll switch back over to shooting raw, using a series of really good single focal length primes, and lighting the models with sharpness, contrast and color in mind. For a gentle walk around the city I think it's fair to forego the 15 pound camera bag full of primes. I really just need one camera hanging off my left shoulder, equipped with a lens that isn't so front heavy that the bottom of  the camera rests against my side. The 20-60mm fits the bill nicely. 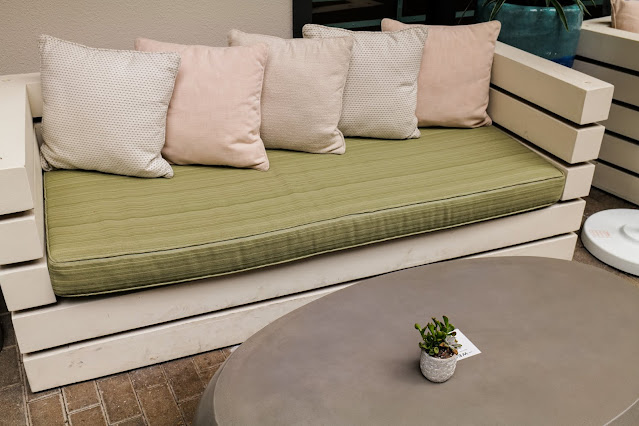 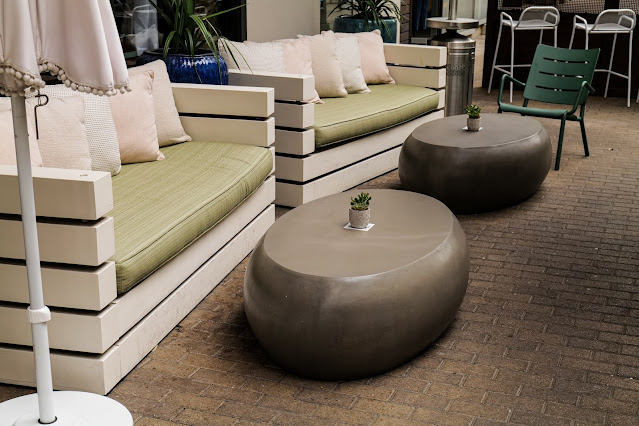 Outside everything is the current rage in Austin.
Those are not coasters under the plants, they are
QR codes to make ordering easier... 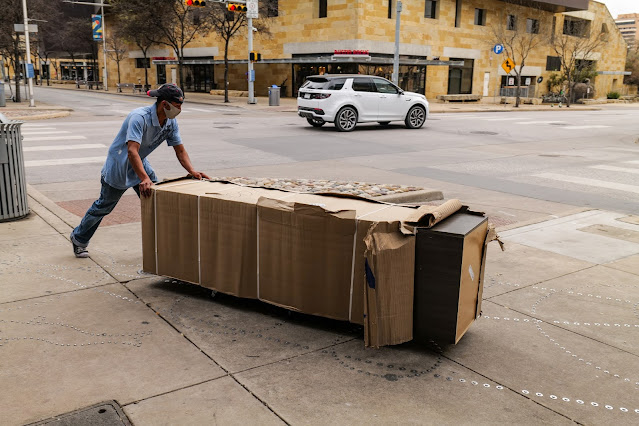 New businesses are starting to move into Second St.
There is a presumption that we're getting closer to
a time when we'll all feel normal again and want to
shop like badgers on amphetamines. 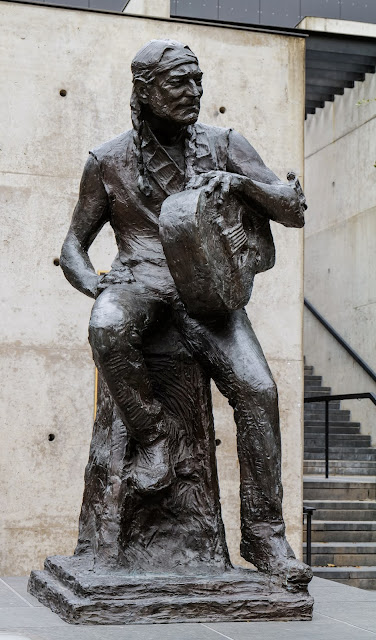 The Willie Nelson statue at the W Hotel and Austin City Limits
Stages is now, officially, a tourist destination. Maybe now
more popular with some groups than the Capitol. 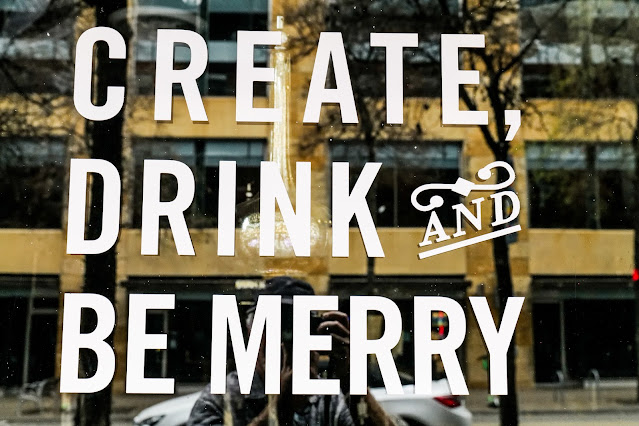 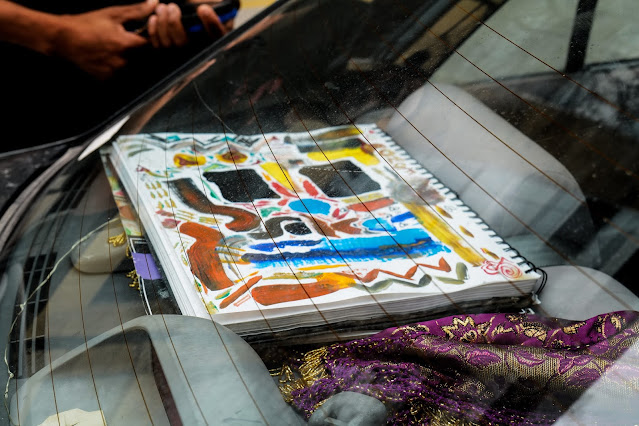 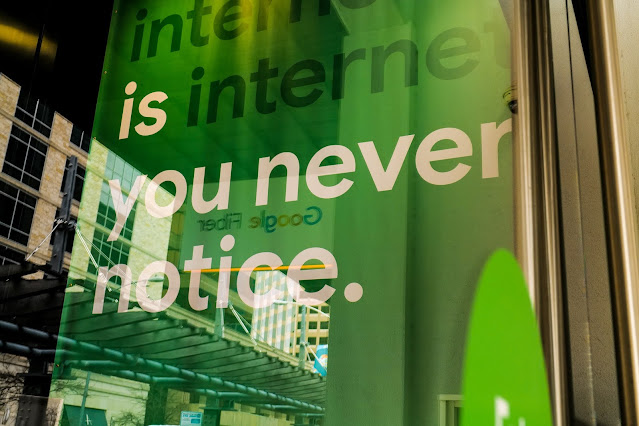 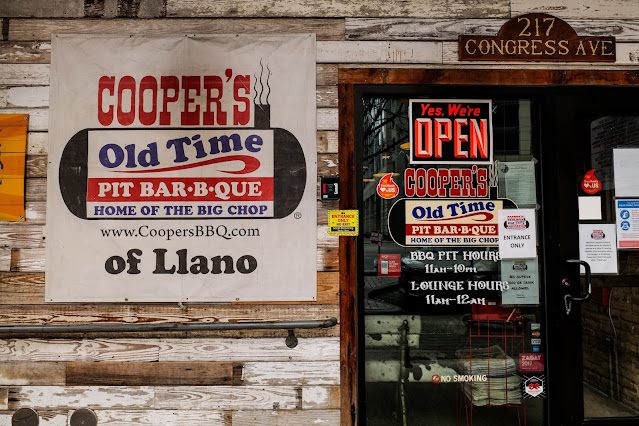 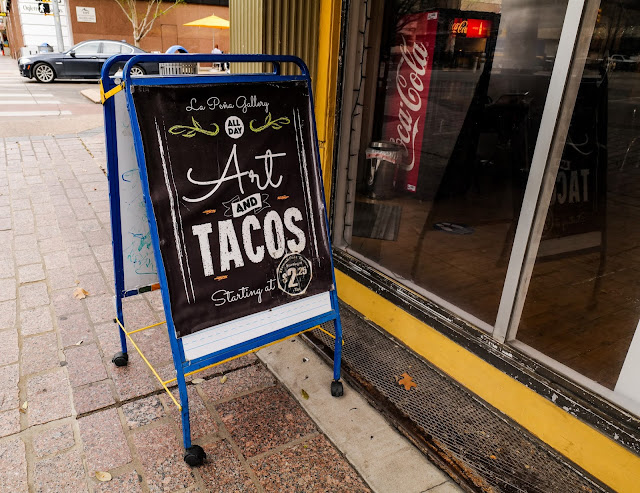 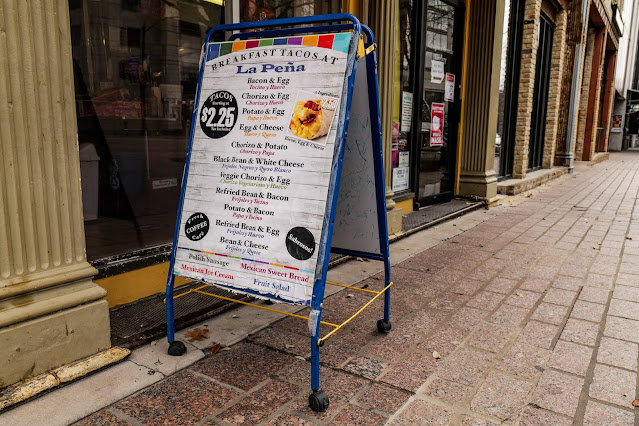 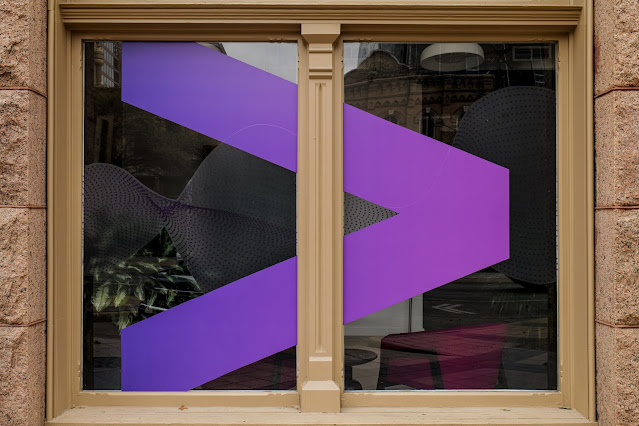 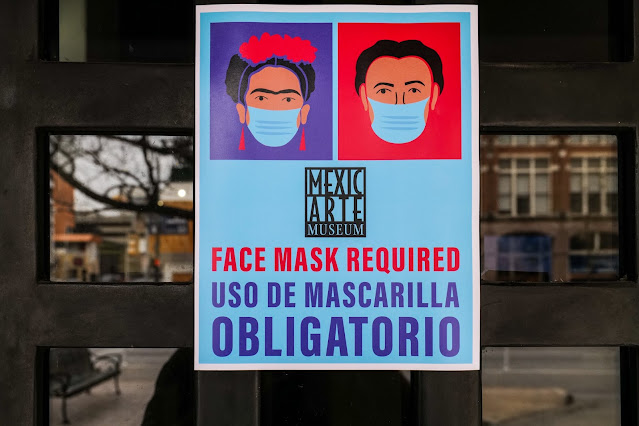 As you might guess, today was signage day.
I gave myself bonus points for every sign I liked and shot. 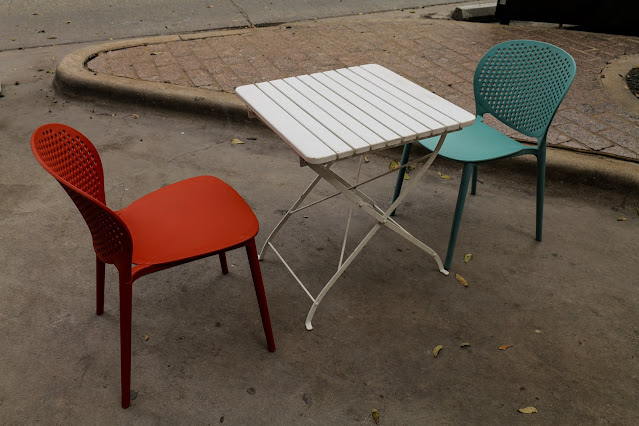 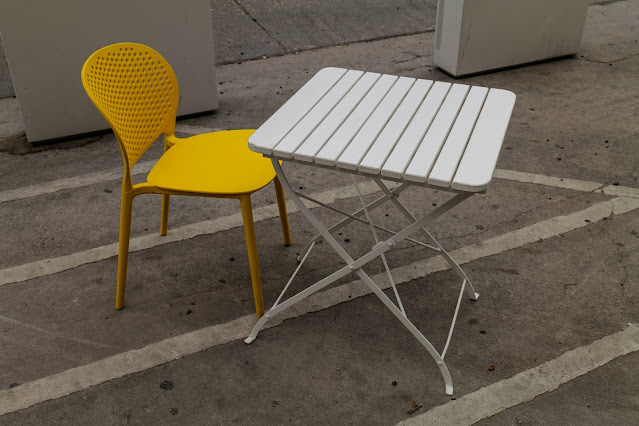 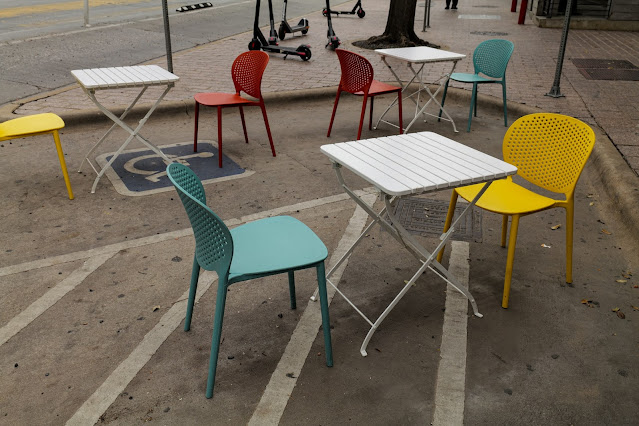 Why not place your tables and chairs right on the handicap parking
sign? Really, who in their right mind wants to sit with their
back to four lanes of traffic? Especially with those new-to-Texas
drivers who don't quite understand the rules yet.... 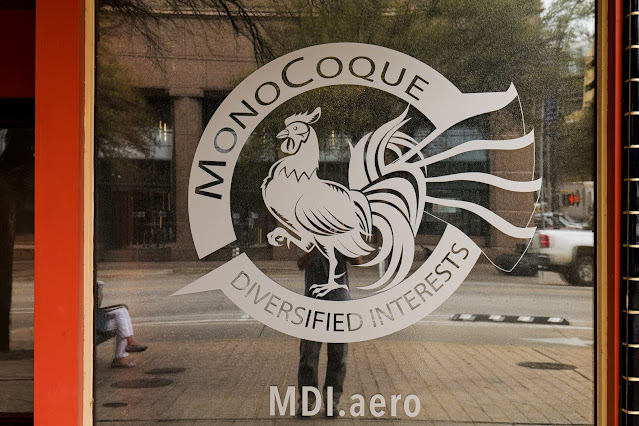 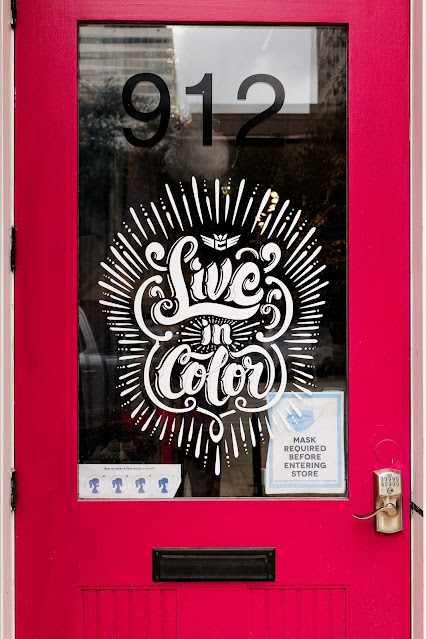 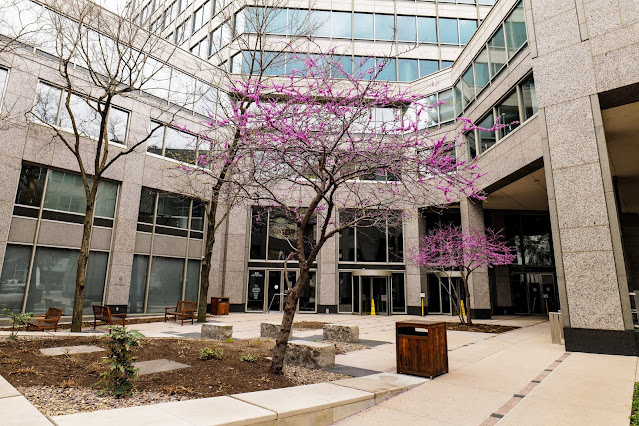 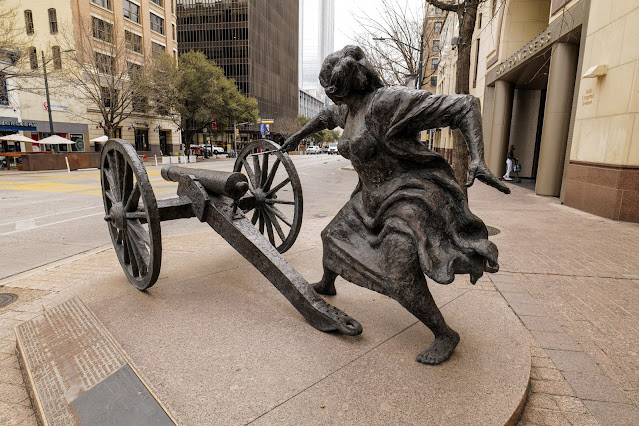 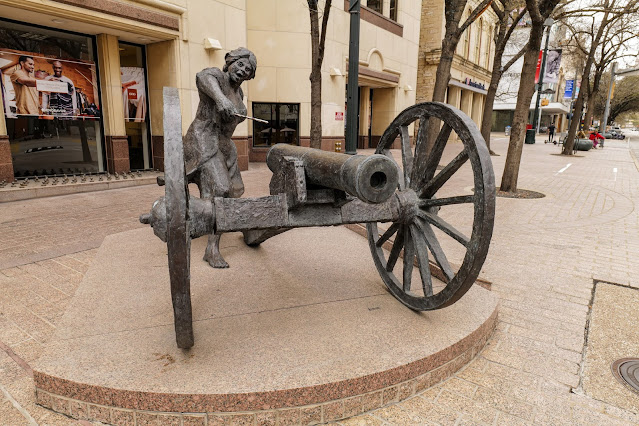 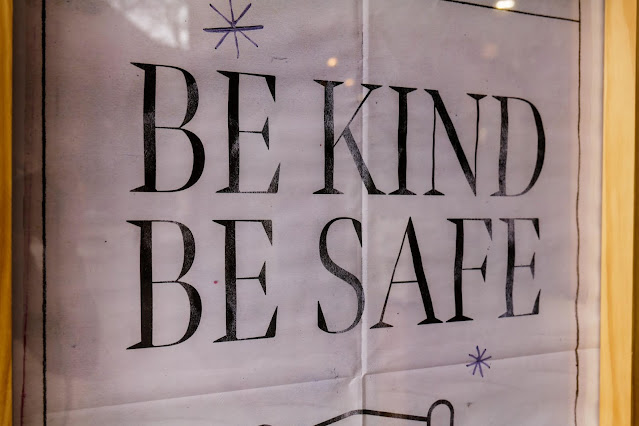 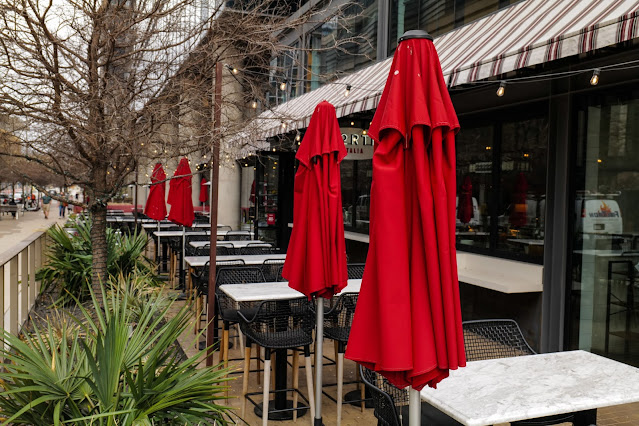 The restaurant, North, seemed to understand the right way to
surmount the lockdown early on. Ample enough outside
seating to allow for social distanced dining.
The safety of which fell apart as non-podded couples met
for dinner and drinks and sat across from each other.
Posted by Kirk, Photographer/Writer at 14:39 11 comments:

I was out taking a walk this morning and ran into this... 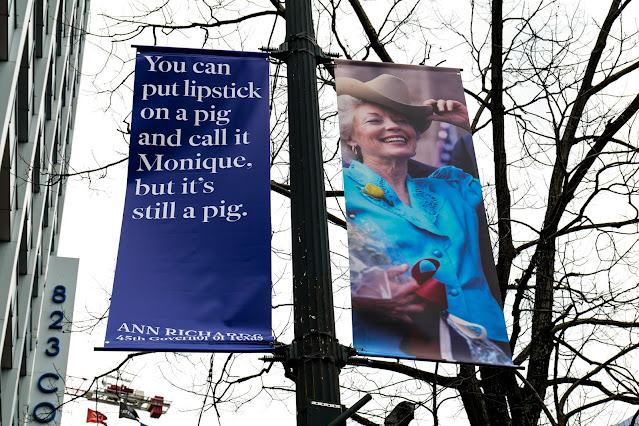 You may remember my recent, frantic search for my missing Gov. Ann Richards slide and my subsequent adventure in scanning it once I'd found it. I forgot that the final images were going to be put up on light poles all the way from the state capitol down to Lady Bird Lake. I was walking along looking at life on the street in downtown and I looked up and saw my work flappping in the wind about twenty feet above my head.
My photo is one of maybe a dozen different ones from a handful of photographers being displayed along Congress Ave. It's tightly cropped but even so it looks great. It's paired up with one of my favorite Ann Richards quotes.... A tip of my Stetson to the fine designers at Pentagram for making this all happen. 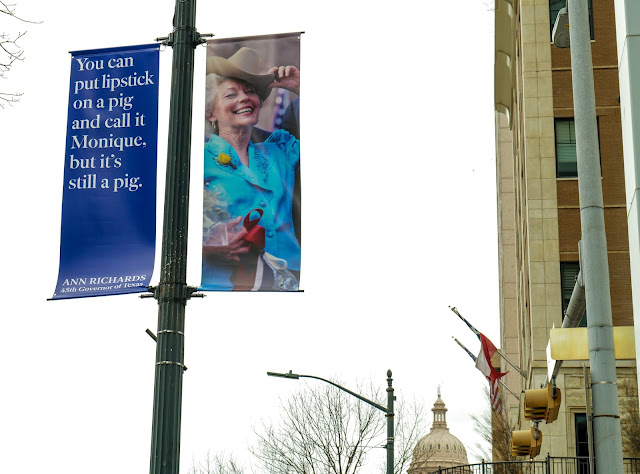 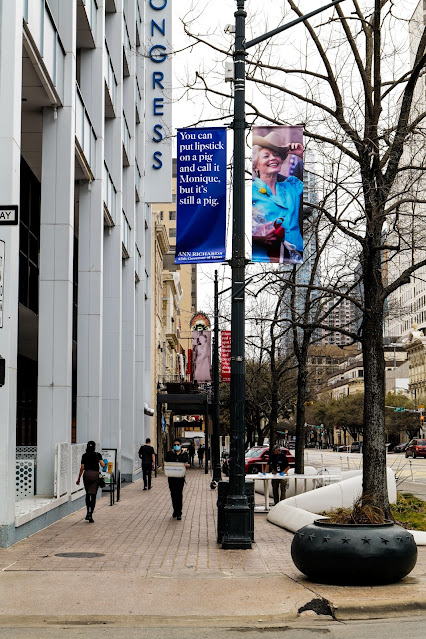 And the flip side.
Posted by Kirk, Photographer/Writer at 13:45 7 comments: