A Caption-Fest Blog. Unconnected splinters of reality while cruising along in sunglasses and a hat. And yes... pants. 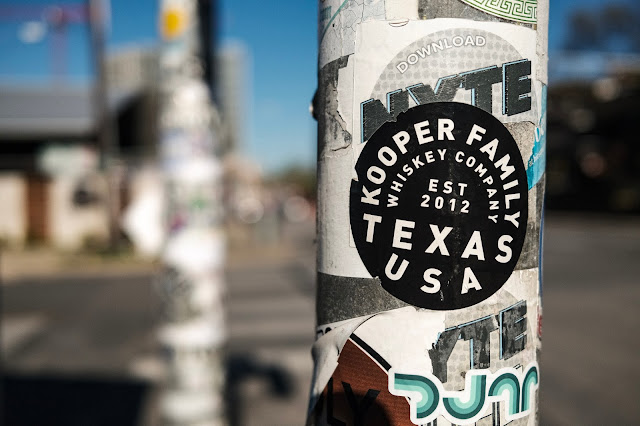 Every time I leave the house with a Fuji X100V I use it in a different way but when I look at the images after I get back to my office I'm always a bit amazed at how much I like the files. I had no real ambition today other than to cover some miles and get some fresh air but the camera can't be denied when it's ready to shoot. I've grown insanely fond of the built-in, four stop neutral density filter. I can shoot stuff like the stickers on this pole at f2.0 and join the "endless bokeh" crowd without even breaking a sweat...
Everywhere I go in central Texas there's a company making whiskey. The only local stuff I've tried is Nine Banded Whiskey (because one of my fellow swimmers is a partner in the venture...) and Milam Whiskey, from Blanco, Texas. They're both pretty good but then I'm probably a highly flawed judge since it's not something I enjoy on a regular basis... 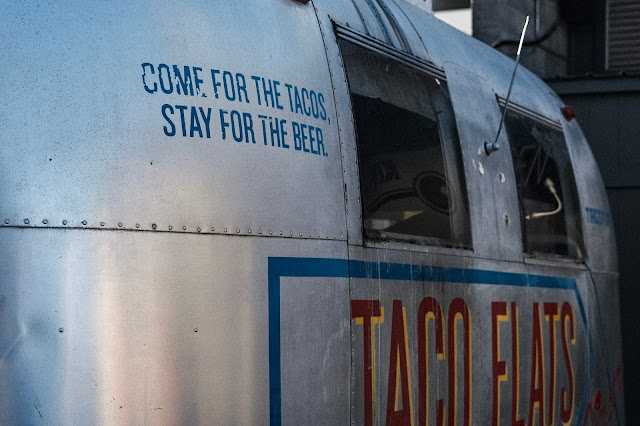 There is a trend in Austin, and it may be nationwide, to have bar with lots of outdoor seating and then have a food trailer somewhere adjacent to the outdoor seating. Contained within the confines of the bar's "space" but somehow also separate. Taco Flats was a popular Austin Tex-Mex restaurant back in the 1980's and I guess this is the (final?) iteration --- an afterthought on the grounds of a booze factory.
I'm going to go out on a limb and guess that, if you are a UT student and you are getting stumbling drunk on Sixth St. most tacos will probably pass your taste test. With flying colors. Ew. Flying colors....I just got that. The old "Technicolor Yawn." 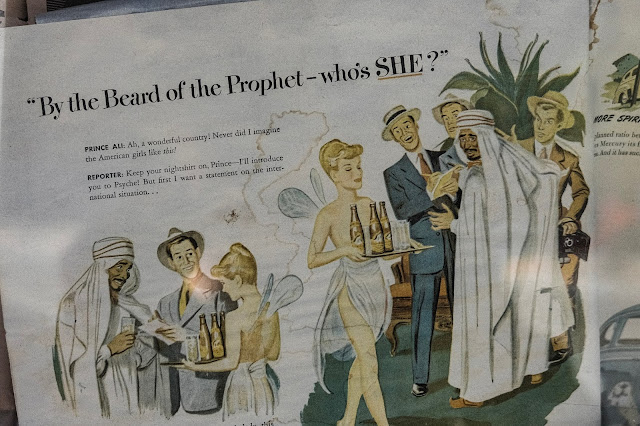 I have little to say about this image from a 1950's advertisement plucked from one of the general interest magazines of the period. It actually does a yeoman like job multi-tasking poor taste, racism and sexism all in one go. I'm not really sure why a current company rehabbing a downtown space would decide to paper the windows during construction with ads like this but, on the other hand, there were probably even worse advertising messages back then. Hey, I just report on what I see. Note that the gentleman on the far right is holding what appears to be a Speed Graphic down by his waist... 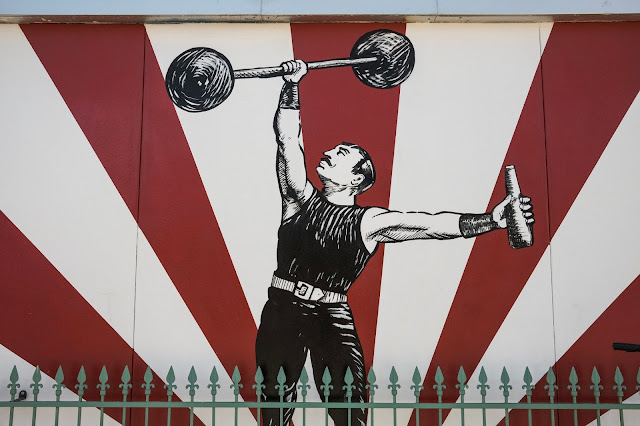 This is exterior wall art for a new bar on West Sixth St. It makes me think of the Beatles "Sgt. Pepper's Lonely Hearts Club Band." Maybe that's Mr. Kight. While the drawing of the man evokes a UK or EU image from the past the white and red stripes remind me of the land of the rising sun. A strange melange when taken in with the green fence just in front. 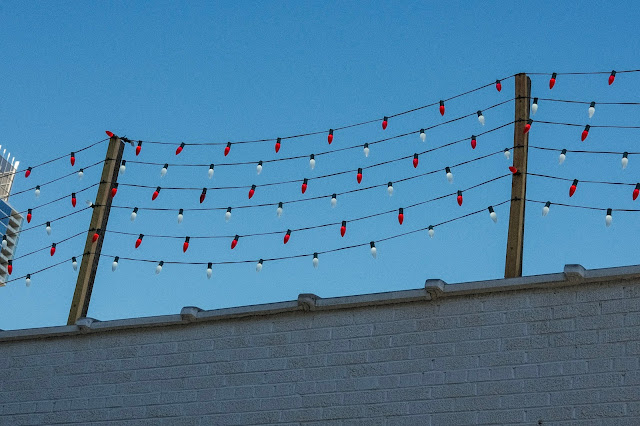 When I rounded the corner from the weightlifter on one side of the bar I looked up and noticed that there were lights strewn above the roof's edge. They seem to echo the color scheme of the background graphic in the image just above. I was happy the X100V has a digital teleconverter function because the image would have been too far away to work in a 35mm frame. Click on this one because the red lights are quite interesting; at least to me. 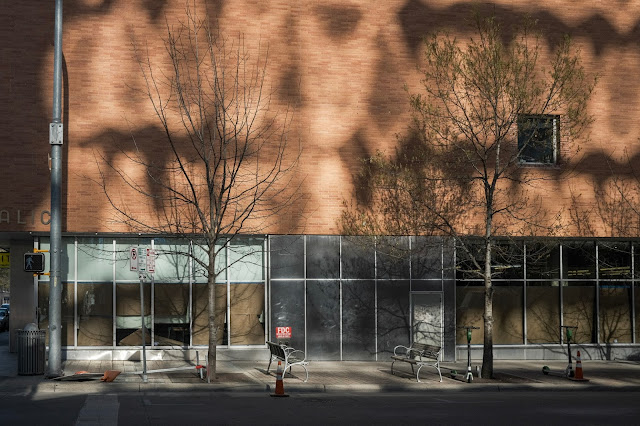 This is a building I walk by frequently, but when I do it's mostly in the afternoons and it's right next to some taller buildings that block the direct sun. This morning I saw it this way for the first time in a long time. It's actually a western wall so it is facing away from the sun but all the buildings around it have mirrored or otherwise reflective windows and all the lighting pattern on the brick is a product of the morning sun bouncing off the east walls of the building across the street and reflecting back. I think it's fun. 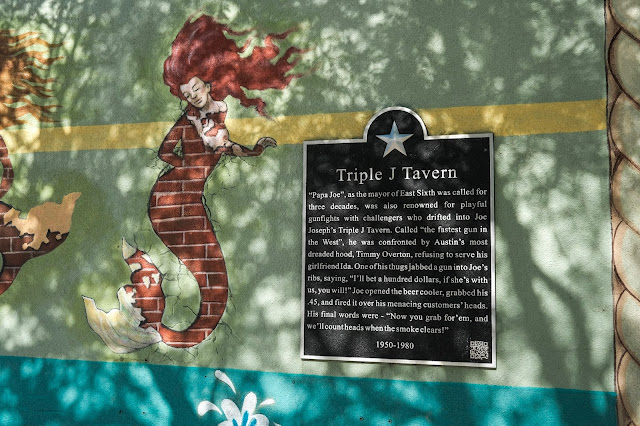 I'll just leave it to you to punch in and read the sign. It's a typical Texas story but that doesn't make the whole trope less entertaining. Especially when presented next to a brick mermaid... 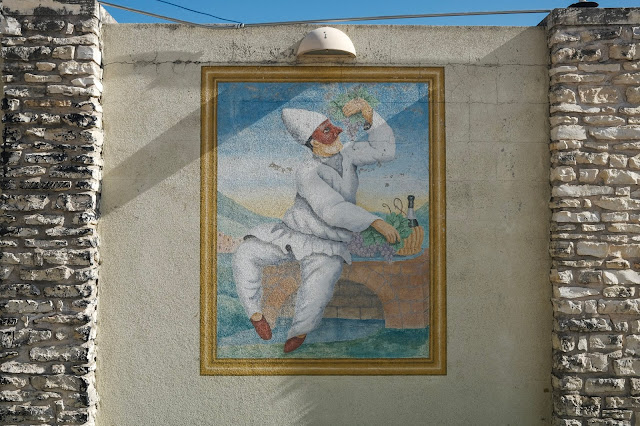 There was once a restaurant called Carmello's that sat on 5th street, nearly east to the freeway. It was a traditional and nice Italian restaurant that served big portions, had white tablecloths and black clad waitpeople. One nice amenity was that they had their own big parking lot for customers. You drove in through a little archway and someone valet-parked your car for you. During one of the economic downturns (I think it was in 2001-2002) the business fell off, people started dining more casually, and the owners ran the numbers and figured they could make more money just running a parking lot close to the new Convention Center so they shut down the restaurant. At some point I think they considered doing something else with the property since most of the actual restaurant (but not the parking lot arches) was demolished but then the project was abandoned. Once everything cleared out I discovered that the entire back wall of the parking lot was covered with these whimsical fresco paintings. Some of them are quite endearing. I strolled slowly through the parking lot today as though it was a big, open air museum. Sadly, the harsh UV of the Texas sun will one day fade the paintings into oblivion. If I cared about antiquities I guess I would make a project of documenting them and then researching to find out who painted them. And why. I may actually be too lazy to do that. But I intend to do the photographic part... 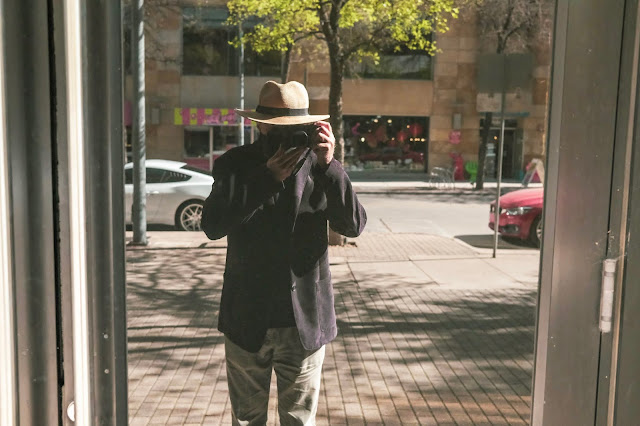 We're having devilish weather here. It's been dropping down to almost unbearable lows in the nights. Last night I put bigger covers on the bed and noticed that it was forecast to be a bone-chilling 45° overnight. It was still in the 50s when I went for a walk. I took along a thick, casual sport coat and suddenly remembered how much I enjoyed having jackets with big pockets. I could actually drop an X100V into one of the pockets. It's only going to hit the mid-70s this afternoon and the sunlight is annoyingly bright and contentious. We'll soldier through. What else can we do? And then there's the hat. You may tease me but this image may just get me a gold star from my dermatologist.... 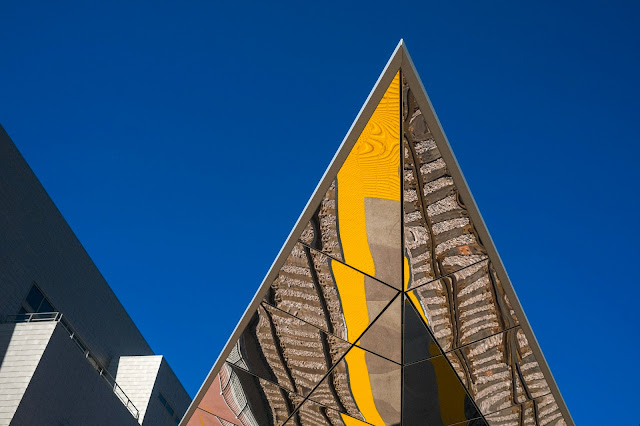 And once again....the prow of Darth Vader's space ship. In downtown. See the reflection of the traintracks? Weird, right?
Posted by Kirk, Photographer/Writer at 16:28 7 comments:

Take a break between a big project and the post production. Maybe get up in the morning and go for a walk. Shoot in the anti-planned mode. 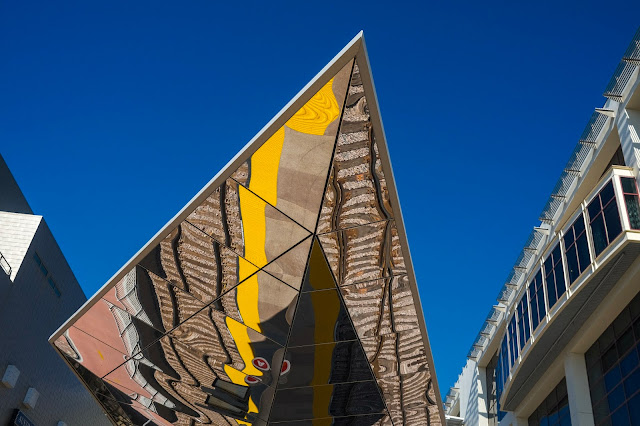 I think it's always a good idea to look up every once in a while. It's especially good if you are a cartoon character and prone to having bank safes and grand pianos fall on your head out of open windows.
I worked a full day yesterday, making fun photographs for a client. But no matter how fun it is, when there is money involved you have to plan, be on your game and constantly check to make sure you've got the details right. If you're not a bit tired when you get home from a day of immortalizing models for commerce then you are better at this than I.
We wrapped early yesterday. I credit good preparation on the part of the clients and also the very professional nature of our talents. I just tried to hold my part of the adventure together as well as I could but I cheated by selecting my own make-up person and also bringing along a smart and on-the-ball assistant.
Since I dodged the rush hour traffic I decided to pull off part of the post production bandaid and edit the images from the shoot before our late dinner. Thursdays are always (always!!!) pizza night at our house and it's a tradition Belinda and I started back in the advertising days. We were all young and a bit crazy back then and we were surrounded by creative people of the same age. We usually gathered at my apartment in Clarksville to eat delivery pizza and watch "The A-Team" on my 13 inch, black and white television set.
The "A-Team" was one of the worst written and most aggregiously over-acted shows ever produced and the cherry on the sundae was the inclusion of Mr. T as super tough, B.A. Barracus. His performances never ceased to amaze and entertain us through the beer goggles of pizza night. With 15 or 20 half drunk advertising "professionals" in one's apartment on a Thursday evening you might imagine that Fridays were our least productive days at the shop. At least during the morning hours....
At any rate, the ritual of Thursday pizza has stuck with us for better than 30 years. It's a hard stop for work on any but the most critical of Thursday projects. We're more sedate about it now that it's just the family. But once the vaccine is totally rolled out......(right...).
At any rate I hit the edit hard yesterday. I was pleased to find that the technical stuff was right on the money so no frame-by-frame corrections were needed. I used Lightroom to convert about 2,000 raw files to medium sized Jpegs and once the process was spinning and grinding away I called it a night.
My schedule for today called for doing the state sales tax report, getting checks to the bank and getting all the gear we used yesterday back to the shelves that keep it organized. But I've found that I'm a lot more productive if I put a bit of time and shoe leather between the shooting of a job and anything else mandatory/productive so I got up early, made coffee and a piece of whole wheat, multi-grain, sourdough toast, put some crunchy peanut butter on it then added a layer of blueberry preserves, ate breakfast, savored coffee and then headed out to the studio. I wanted to hit "upload" on the 2,000 files and get them into Smugmug.com before Ben and Belinda got up and started grabbing for their share of bandwidth...
Button pushed, gallery created,  I headed into town with a cute, happy, precocious and very able, black  Fuji X100V hanging in front of my chic sport coat.
I was making a big loop through the downtown area when I came to this new commuter train station, adjacent to the Convention Center. I looked up at these shade constructions modeled after an Imperial Cruiser from Star Wars and noticed that the underside of each one was made up of mirrors. I thought they were funny and also visually interesting. Can you find Waldo? (the photographer...). Hint, he's in the second shot. 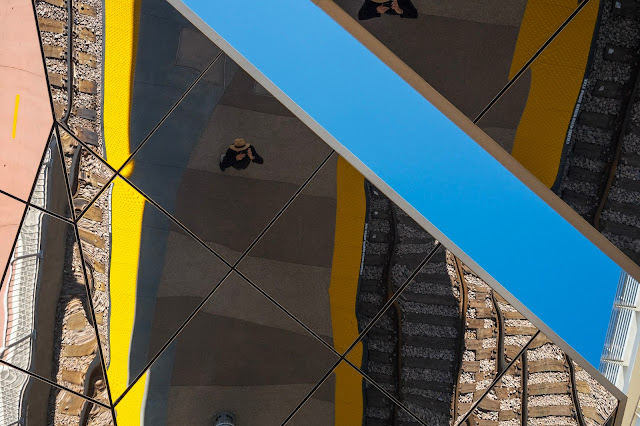 In a marvelous bit of "Wow! That never happens!!!" my client from yesterday has already made their selections of six different looks for each of six models. I have the list in hand and I'm changing gears back into "work mode." It's the fastest turnaround/decision-making I've ever experienced with a client.

More from this walk in the hopper. Please stay tuned.

Posted by Kirk, Photographer/Writer at 14:19 3 comments: