Storm Clouds on the Horizon. Walk Down Third St. What's Next? 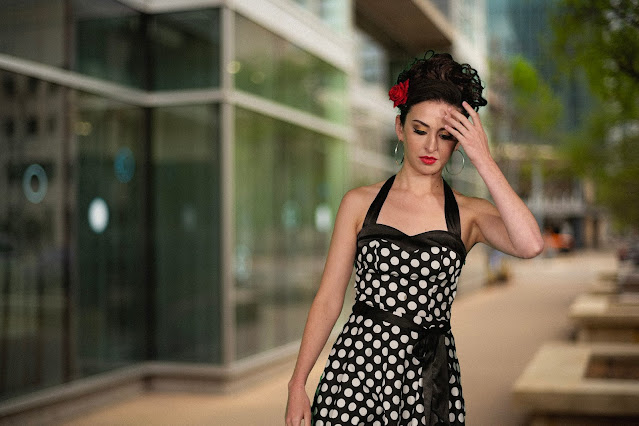 I always dread these words: "The pool will be closed for three days next week for maintenance." Especially when they are coupled with: "We're trying out a new pool maintenance company for the first time in 25 years. I'm sure everything will work out just fine..."

So, if you happen to see me curled up in the fetal position after Friday of next week you'll know that something has gone horribly wrong with the plan. Horribly wrong. And the three days will have stretched out to three weeks or worse...

Our beautiful pool will be closed on Tuesday, Wednesday and Thursday of next week for "routine" maintenance. The more dedicated (compulsive?) among our masters swim team are already researching and planning for trips to alternate pools. We hope to stay wet and out of breath throughout the closure.

Speaking of storm clouds, it's been unnaturally cold here lately. This morning it was in the upper 40s when I got up for swim practice. It's been chilly all day. So I checked the weather forecast only to find that we'll have a strong weather front sweeping through the area tomorrow around midday. Wouldn't you know it? I've got a new car and the forecast includes "likely" enormous hail, torrential rain and even possible tornados. But the risks exist only in a thin, two hour slice of time. Say from 11 am till 1 pm. It's the hail that bothers me. As a reader of ancient Greek literature I can't help but wonder if I'm being punished for the obvious hubris of having bought a new car.

Photography: Yesterday I had a wonderfully fun and uplifting photoshoot with my good friends at Esther's Follies. Esther's is a comedy troupe that does laugh till your sides cramp skits about current culture, politics (both sides get skewered equally) and celebrity shenanigans. There is also a magic show. They are an Austin treasure and have made people smile and laugh for going on 50 years! They've made it through the pandemic and are getting ready to open again in the early Summer. I'm sure they'll do it safely and with reduced audiences but it's thrilling to see their perseverance pay off. I asked them if they needed new visual content and off we went!

We used to shoot the rehearsals with whatever props or set pieces were on the small stage but lately their advertising and marketing designer has gone down the deep rabbit hole of image compositing and from what I've seen he's got talent. So yesterday I came by, in the maiden work voyage for the Subaru Forester, grabbed a free parking space on Red River St. and dragged my usual case of lights and stands into their theater. While doing so it dawned on me that I've been photographing their shows a couple times a year for nearly the last 20 years.

The cast had a nine foot wide green screen set up on the stage and the plan was to shoot everything in front of the green screen. Now, at the outset I should say that these folks move quickly. This is not like a corporate shoot where we can test and test and tweak and tweak. We shot something like 35 set ups in a bit under three hours...and that included my initial lighting and exposure tweaks and the tear down at the end. It's a brisk pace and it calls for lighting that works well without further major adjustments.

I lit the stage with two 300 W/S lights (monolight electronic flashes) from the front, positioned about eight feet away from my central camera position. I got them up as high as I could and put smallish soft boxes on these two fixtures. Then I put up two more lights (same kind) at more rakish angles to the stage and used them direct with 7 inch reflectors. I set the ratio between these side lights and the center lights at about 1.5:1. I admit it; the light ratio was flatter than I usually work but it felt just right for the space, the stage, the actors and the final use.

I used the Panasonic S1 camera and it surprised me. I'd almost forgotten two things: First, how good the camera is and how well it works for this kind of project. And second, that I hadn't used it since I did the most recent firmware update which tweaked the AF and more fully implemented the dual ISO feature of the camera. I chose to use the low ISO range and set the camera to the top of that range at 800.

The 24-105mm f4.0 zoom from Panasonic was perfect for this photo-adventure since I could go from a wide stage shot to a "waist up" personality shot while standing in one position. Nice. The lens was set to f7.1 (based on an incident light meter reading from the center position on the stage, facing the camera) and the shutter speed was set to 1/100th of a second. Since we were pretty tightly tested and locked in, and I had set a custom white balance for the flashes, the client and I decided to try our luck and shoot the entire project in Large, Fine Jpegs. No horsing around with raw files yesterday!

And, interestingly enough, this is the first theater shoot I have ever, ever done where in post processing I didn't have to tweak anything. No changes at all to the files as they were shot!!! Instead of making tweaks here and there and then saving out a whole new set of Jpegs the files I uploaded to the theater client (all 1500+) were camera originals. SOOC. Inordinately large time savings. Much happiness.

I didn't bring a tripod and I worked with the camera handheld yesterday afternoon. It's vital on people shots, and even more vital for people shots done on green screen, for faces, eyes, etc. to be in sharp focus. It's far easier to composite images with sharp edges and then soften the transitions than trying to start with a soft image to composite into a background. I opened the S1 menu and went to my usual AF mode which is usually "1 area." I typically work by moving the little AF square around the frame, trying to put it over people's faces to get good AF. I had never seen the ability to modify the single area control before.

When I've used face detect in the past I've done it by selecting the control on the far left of the row of options; the one with the person and bird icons in it. When I'm selecting that mode I have a choice of face or eye detection. But when I saw a new sub-menu of controls come up under "1 Area" I thought it would be interesting to give it a try. It's obviously a new update to the system so we gave it a spin. 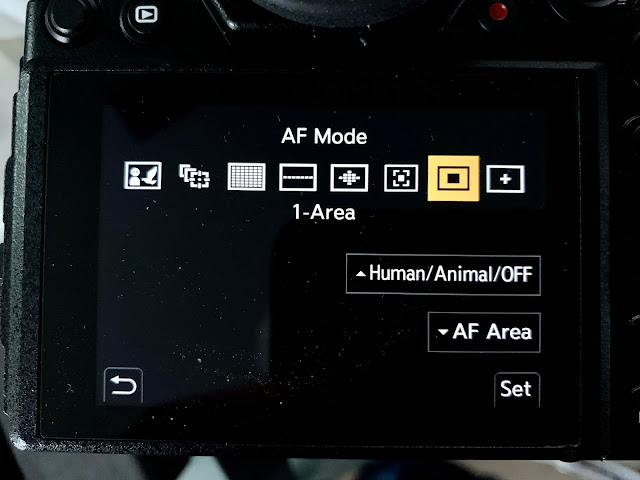 Here is the menu set up in the traditional way I use the AF modes.
Single area. Movable focusing target. 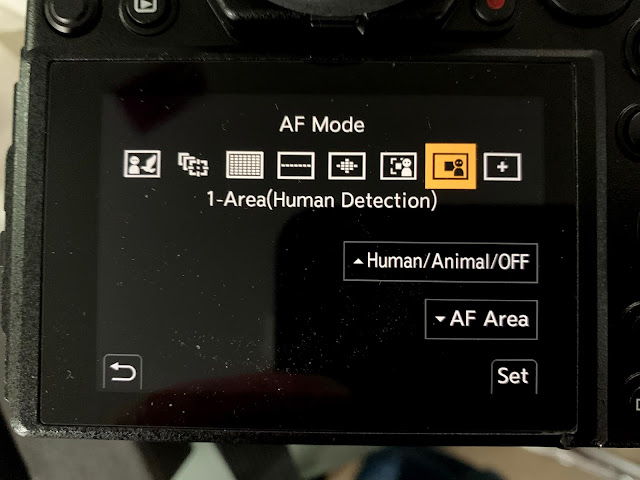 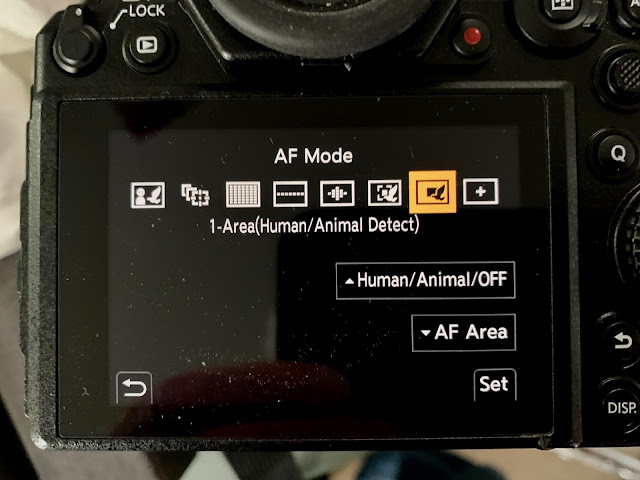 We can also choose "1-Area (Human/Animal Detect).
I swear, these additional menu items were not there the last time I used this camera! I went with Human detection and also found out that you can still set the default AF square's size. The camera will default to the area in that square if it doesn't find a human to lock onto, so you are basically covered.
When the first person walked on to the stage to be photographed I brought the camera to my eye and pushed the shutter button half way down (don't forget, I still use S-AF and not back-button-mania) and, as it was a full length shot, the camera positioned a large outline box completely around the subject and turned the box green (AF confirmation). I spent the afternoon with the camera set to this setting.
If I was photographing a waist up or closer shot the camera would detect the face and put a box around the face. If there were multiple faces on the stage at one time it would lock on the closest one but I could override it by tapping the face that I actually wanted to be in perfect focus on the rear screen. If I was closer still the camera would automatically default to focusing on the closest eye.
Now, I was not shooting under bright stage lights. In fact, we didn't have a theater lighting tech on tap so I was focusing using the illumination of 150 watt modeling lights, all of which were about 20-25 feet from the stage and two of which were shining through soft boxes. Not an optimal way to shoot face detect in AF  but contrary to almost everyone writing camera dreck on the web the Panasonic camera nailed every single frame. We were 1500 for 1500.
Okay, so it always looks good on the screens on the back of the camera but how well were the frames really focused when we popped them open on a 5K Retina screen at 100%? Well....they were perfect. Every eye on the individual shots was right on the money. All the group shots were perfect compromises and all the people were sharp. I even zoomed into some of the full length shots and looked at the eyes and they were perfectly sharp.
The web seems to pick up a meme about particular cameras and brands so as to slot them into some hierarchy and no matter how much the cameras improve it seems they are always destined to wear the tag they caught when an early reviewer casually tested and then tossed in a  throwaway review with little science or experience behind it. The slag for the S1 series of cameras is twofold but only one of the parameters is objective. Yes, they are bigger cameras than most of their competitors. If you must have a lightweight system you'll need to look to one of the other brands and also limit yourself to slower lenses.
The second ever-prevailing black mark on the S1 cameras is to say that they struggle to focus. My experiences show me that they focus very, very well. Accurately and quickly. At least in every still photography assignment I have used them on.
This particular outing with the S1 was another reminder to me about just how wrong online reviewers can be and how they often find a small nit and then sabotage a great set of tools in service of their own favorite brands. The only issue I found with focusing on S1 cameras was when trying to do AF-C in video, in low light situations. The first few firmware fixes helped but didn't cure the problem. But the issue was never one that should have caused concern for the enormous majority of photographer who aren't doing video or the subset of professional videographers who understand that AF and most kinds of video production are oil and water.
Yes. I want good C-AF I'm going to put a camera on a gimbal. But a smaller, lighter camera works better in that use case. (hello Fuji X100V). For just about everything else I do in video we're well enough lit to make focusing a breeze. Even manual focusing!!! Heaven forfend.
Bottom line for me is that for the way I shoot the focus for photography is perfectly fine. Just as good as I need it to be. And the same goes for the two Leicas as well. Perhaps it's because I mostly use the 24-105 in fast moving situation like the one I described above, and it's probably the fastest focusing of the native Lumix S1 lenses, but I've also used the 50mm S-Pro for a number of shoots and it does fine as well.
When all is said and done the proof is in the tasting, or the integrity and look of the finished files. I'm happily satisfied.
Now, what to do about the hail?

Posted by Kirk, Photographer/Writer at 17:07 8 comments: