Around Austin with a comfortable camera and lens. 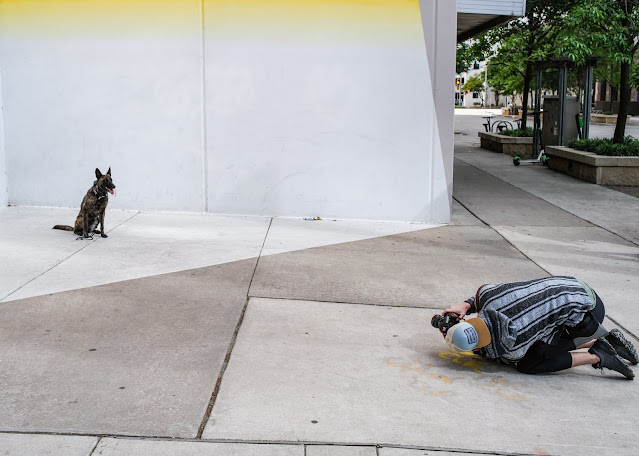 Stay human. Stay.
I was certainly out of sorts yesterday. Probably not enough high intensity billiard workouts. Or too much pondering about cars. So, when I feel drained and directionless I think the best thing for me to do is to grab a life-affirming camera and lens combination and go for a long walk. Lately my walks have been getting longer and longer. Not the length of time but the distance. I'm averaging about 4 miles now and I blame my Apple Watch for that. It keeps track of my activity and my goals and I'm always trying to beat its expectations. Yesterday I gave up and strapped on a cheap, dumb, Timex. It has three functions. It keeps track of hours passing, minutes passing and seconds ticking by. That's about it. And it's an old one; I have to wind it if I want to use it.
I brought along an SL2 and a Contax 28mm Zeiss Distagon that works on the L-mount with an adapter. It's such a pleasure using a manual focus lens if there's no pressing schedule or breathless assignment. You can kind of wing it if you want to. I set my manual 28mm to f8.0, focus it to about six feet, and just assume that most of the stuff I point the camera at will be in focus. If it's egregiously mis-focused I might intervene. But sometimes I might not.
Austin was an odd mix yesterday. Half the people were masked and half were not. There was no really logic or rationale to the distribution of maskers to non-maskers; certainly nothing by age or any other demographic that I could divine. Just a random distribution of human data points. A stochastic mix of lip and non-lip people peppering the urban landscape.
There is a large art work downtown called, Tau Ceti at 2nd St. and Brazos. It attracts photographers and their "models." Today it was busy. People were lining up to photograph their loved ones against Austin's largest piece of outdoor art. I don't have a photo to show of the whole work but it's pretty easy to Google.
I loved the image of the guy with his dog. And then I looked over to my right and saw that he had a whole pack of very, very obedient dogs just waiting patiently on the side lines waiting their turn on "stage." 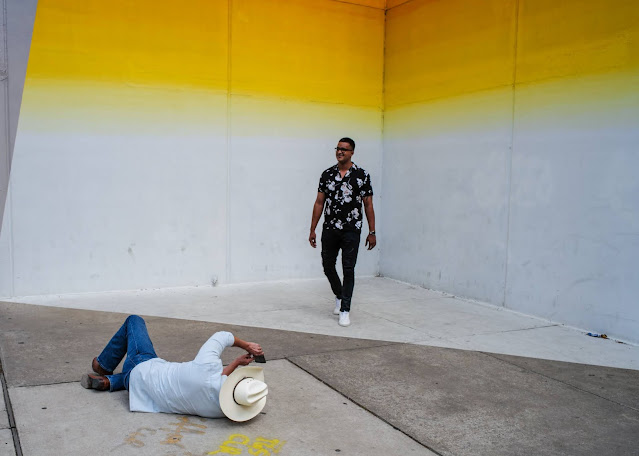 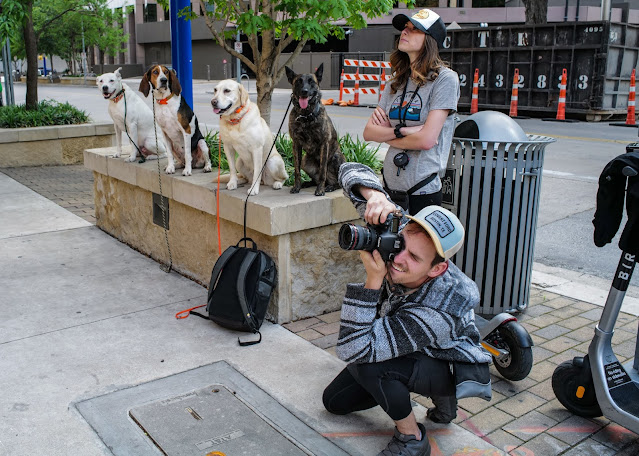 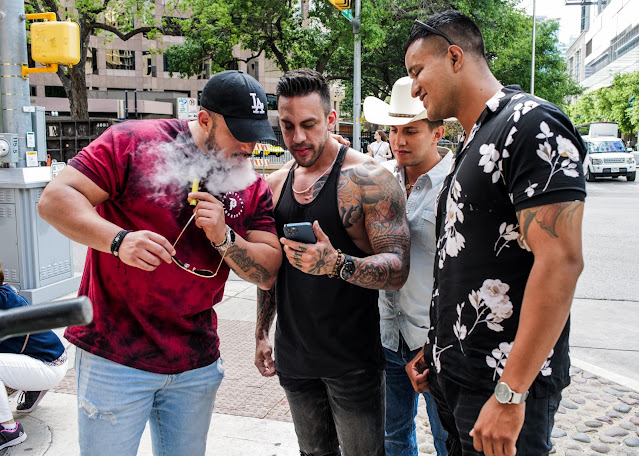 Phone-tography assessment at Tau Ceti art.
These guys were having a blast photographing each other in front of the soaring, painted mural. I saw them checking stuff out on a phone and went to photograph them. They looked up and smiled but I wanted the shot where everyone is checking out the results of their "shoot." I shot some frames and then asked them to replicate their stance the way I first saw it. They were incredibly cooperative and one took the time to ask, "Is that a Leica?" I should have hung out at Tau Ceti longer because people were getting really creative. And everyone had such a nice vibe. But I like to keep moving so off I went. 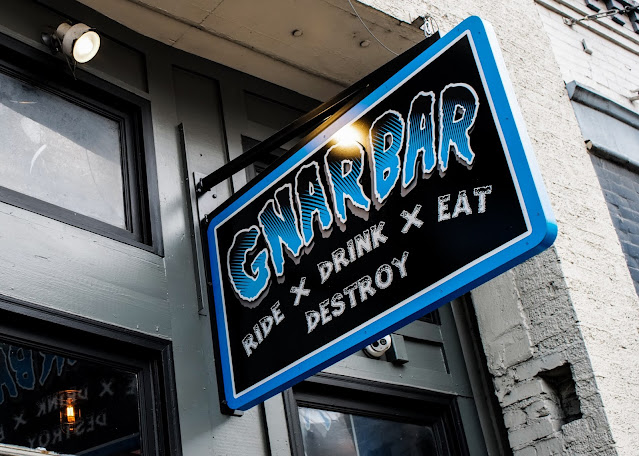 Now that's a tagline you don't see much.
If you get nervous about the safety of your camera gear, or if you are uncomfortable with combative street people and people who are addicted to alcohol and drugs (and therefore not very predictable...) you might not want to walk down East Sixth St. You will be accosted for money and occasionally you will be the target of some loud and aggressive verbal abuse. But as the story about the Dalai Lama goes, you should run toward the snarling dog. (metaphorically). If fear keeps you from taking your camera somewhere that fear shows and I think it creates a victim persona that actually attracts unwanted attention. My attitude is that if you fear for your gear you probably shouldn't take it to the places that cause you that kind of duress.
My take is that the camera is part of me and it goes with me everywhere. If keep track of my personal security correctly it's rare that anyone hassles me. If someone asks me a question I always answer. If someone greets me I always return the greeting. It seems more dismissive to ignore someone than to answer them honestly. And directly.
As the weather warms up more and more people are out on the sidewalks and some small number of them are just relentless about making trouble. But there's a difference between people who unfortunately find themselves temporarily homeless, and people with addiction and/or mental health issues. It's the unpredictable people what you need to keep track of as you glide through the space. Being confident and at ease seems always to be the best strategy. You should always know where everyone is around you. And be alert. Calmly alert.
But East Sixth Street is part of my walking route and I don't plan on changing it. Even if it does get a little uncomfortable from time to time. Dicey areas are a great argument for keeping your gear minimal and portable. No big camera bags (do people still walk around with big camera bags? I don't see people doing that much in Austin now...) and just one camera + lens and you'll be quicker and more agile. But the fear of loss? Naw. That's not really a concern. 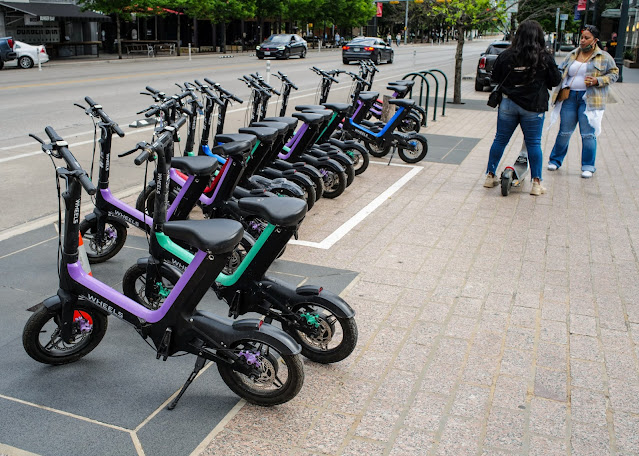 Austin has now been officially overtaken by scooters.
By the time I finished my walk I was refreshed and ready to get back to business. Just finishing up some job details here and working through some routine document shredding. Tomorrow the new car gets delivered, swim practice happens, blog writing continues and preparation for a photo job at Esther's Follies (comedy theater) gets done. Wednesday is a "shoot day" with a super talented troupe of actors and I'm so looking forward to it. Something new to think about and write about.
Posted by Kirk Tuck, Photographer/Writer at 15:14

"Dicey areas are a great argument for keeping your gear minimal and portable."
Where were you when I needed this advice?

I had just fulfilled a dream of mine to purchase an expensive Phase One system and taken delivery of it direct from the manufacturer in Copenhagen. For those unfamiliar with Phase One, it is probably the biggest and heaviest medium format camera around. I did some scouting for a good location to try it out and ended up in the colorful and dicey neighborhood of Christiania. Apparently Christiania residents have declared that they are an independent country and even have their own currency. The Danish and city government seem to tolerate them and leave them to their own devices. As far as I can make out they are left over hippies from the 60s plus newer generations who want to emulate their freewheeling and narcotic fueled lifestyle. The main street is called Pusher Street and I found out you may take photos anywhere you like in Christiania except Pusher Street (for reasons I will let you figure out). So of course I took out my great big camera and honking huge lens and tried to take a picture of it.

I was immediately approached by this huge menacing man (remember, Danes are descendants of the Vikings) plus a group of similar buddies and admonished that I could not photograph Pusher Street. So I meekly went on my way but somewhat fearfully because he continued to follow me. At one point he caught up to me and, in a low voice, muttered, "Perhaps you should use a more discreet camera next time."

Ouch, great story Jon. I'm not sure I'd be brave enough to walk around with a Phase One system. Or strong enough...

It's kind of sad that crazy people screaming at you on the sidewalk is more or less normal now.

Any chance all those scooter riders are fueling up at Gnar Bar before the seeking and destroying begins?!?

So is that you on the ground Kirk? Do you have an issue with getting back up? I do. Where were the rest of the cameras and lenses? It looked like the the young people were using only one camera and lens?? Is that possible? That isn't right, or is it??? As for the experience Jon Maxim had I had the same experience a couple of years ago when I was working on a project for the city where I live. I had a biker chick, and her buddy follow me around yelling obscenities at me. She, and her buddy had just come out of the local biker bar so at one point I turned, walked towards them, she started to retreat, he just stood there, so I asked him in not so pleasant language who was running the show, and who was riding the front seat of the Harley? I use to ride in my younger days. He smiled, and grabbed his friend by the arm and left. Bottom line, it's a shame that we have to hide, sneak around to shoot. I believe less is better, smaller is better now days. If I'd had a cell phone there'd been no issue. I tried the same shoot dress as an old long hair hippie with a TLR, no issues. I acted like a tourist, no issues. I hate to sell my gear because of idiots, but maybe it's time to cut back. The days of the big cameras and lenses are coming to an end I'm afraid.
Thank you for your Blog.
Be Safe
Roger