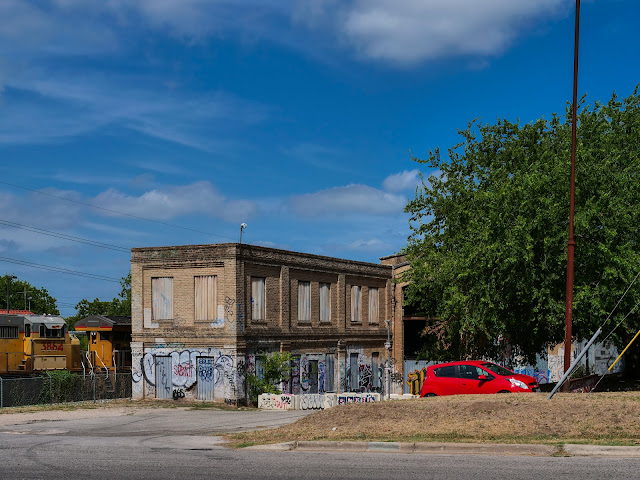 I really like this dilapidated iron works building on the edge of downtown. I think it's still functional but I rarely see anyone there. Today was unusual in that there was a car parked out front. A bright red car that made a nice contrast with the ample green tree and the melodic blue sky. I approve of the color I get out of the G9 and I feel like the lens adds something special to the mix as well.
Being a nerdy photographer I've read all the review of the lens and looked the MTF curves too often. I have surmised that f4.0 or maybe in between 4.0 and 5.6 is the aperture setting that yields the highest quality files. Well, highest quality in terms of resolution and contrast.
Today I just set the lens at f4.0 and the camera in both Auto-ISO and aperture priority and spent my time looking at stuff. And I really worked on just looking at stuff. Downtown is in constant flux. People response to emergencies like overwhelming heat in a totally different way. Shops are opening. Older businesses are closing. And I try to really look at all these things as I stroll through downtown. The accession of the images into my own brain's memory bank comes in handy when I decide on projects that require a certain environmental feel.
It's interesting that walking with one's eyes wide open is almost like reading a stream of consciousness novel. A surprise in every chapter. With lots of texture and plenty of the universe's fine writing.
And red cars. 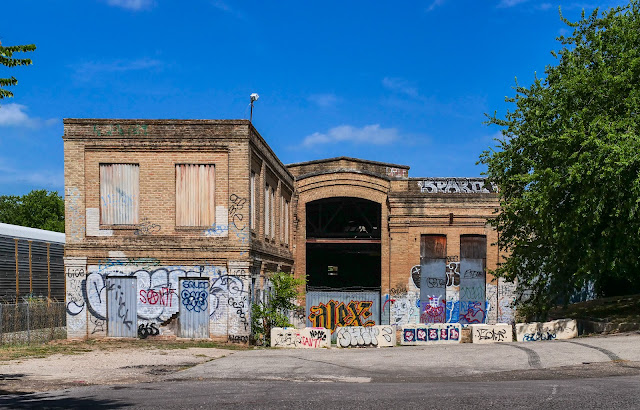 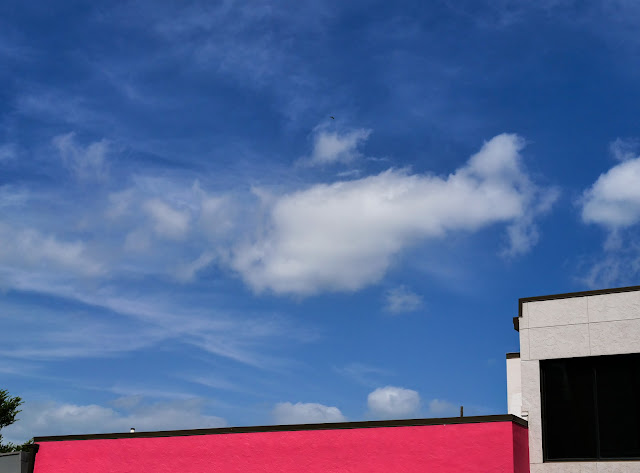 Posted by Kirk, Photographer/Writer at 16:04 6 comments: 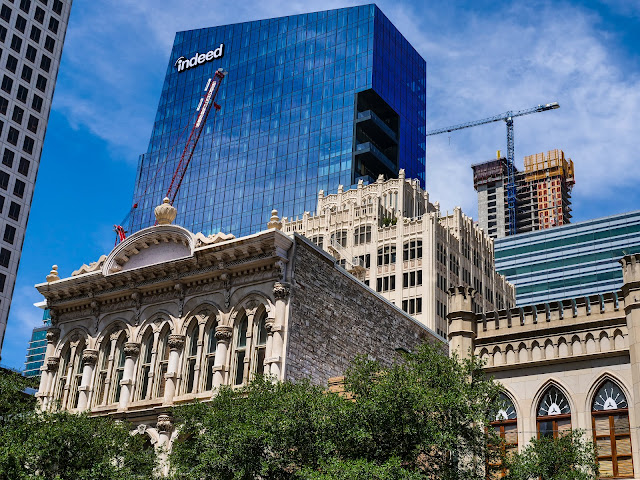 By some measures (mostly calendar centric) the Panasonic G9 micro four-thirds camera is getting long in the tooth having been announced in 2016. But a raft of meaningful firmware updates have kept this camera as up to date as anything else in the market today. It's a powerful photographic tool and it's also an extremely effective video camera. I used two of them on two major projects in 2018 and pressed them into good service for plenty of gimbal-powered video in 2020. The camera features a 20 megapixel sensor, fast focusing (with the right lenses), a robust and weather resistant build quality and a great viewfinder. I love the color that I get straight out of the camera in Jpeg. If I have to mess with raw files they are great too!
The lens is a 25mm, speedy, Leica-designed but Panasonic built, fast aperture lens. The one I currently own is the second generation (the most current) and while the optical design is reported to be the same as the first one many improvements were made to the AF capability of the lens when used with DFD capable m4:3 cameras. My only idea for improvements to the lens would be to cut down on the size of the supplied lens hood. It's pretty big. But then again --- no flare from glancing light.
The lens is a perfect match for the G9. Together they are reasonably light, easy to handle, fast to focus and capable of very high color discrimination, which might just be more valuable to the image quality of a file than many other parameters that get more press. In a way, it's the classic "good camera/standard lens" combo that most of us started with in the days when Canon, Nikon, Olympus and Pentax film cameras came in "kits" along with a 50mm, standard lens. This is the micro four-thirds variation. And it works perfectly if that's the way you first got into photography. Except, perhaps, the lens is better...
I went out this morning, after swim practice, because I could feel the cabin fever induced by the wretched heat and I wanted to be outside playing with a camera. The G9+25mm combo made a lot of sense since it is small and light to carry compared to a full frame camera and a big, standard zoom. The battery life is really good and the camera seems indifferent to the heat.
For some strange reason everywhere I looked I saw architectural and urban-scape stuff today. So that's what I photographed. My first impulse was to go completely black and white but that fell apart after the first block walked because the sky was actually beautiful this morning and I couldn't resist the color dynamics. I did shoot some stuff in black and white but I really think I should stick to color or at least shoot raw+Jpeg with the Jpegs being black and white. Then, after I get back to the studio, I can make up my mind at my leisure....
Lead in to a question:
I know a lot of my readers came to the blog because of our early reporting on all things micro four thirds but I'm curious how many who are still here are continuing to resist the lure of full frame and APS-C camera and still enjoy shooting with the smaller sensor format (and the delicious assortment of lenses).
?????  It would be interesting to know since the internet makes it seem as though everyone throughout the world has rushed to grab hold of big sensor cameras. I get sidetracked by the promise of a performance difference but when I go out and shoot with a favorite camera like the G9, along with a really great lens, I just don't see much room for meaningful improvements. 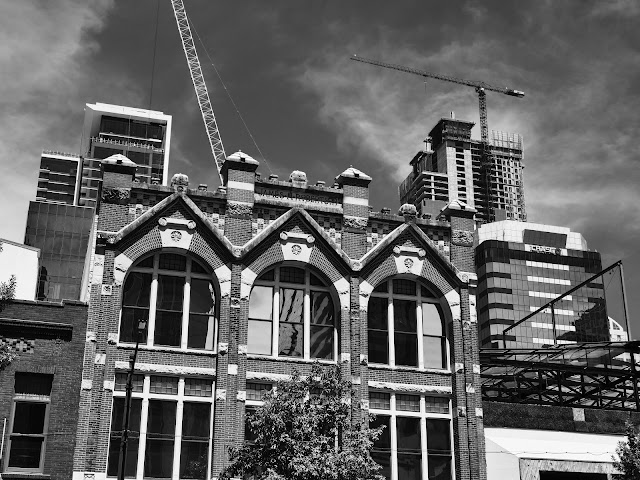 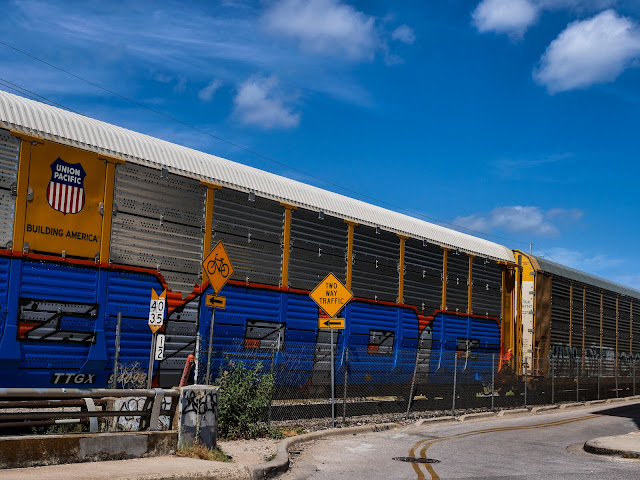 Hey! Look! We still have trains in America.
I wonder if we could somehow learn to transport people with them?
Wouldn't that be a great idea? 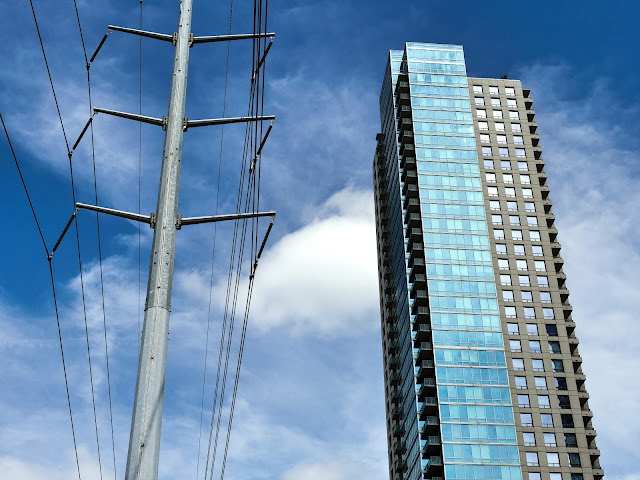 We're 42 days in a row over 100° and the power is still on. It's a miracle.
I guess our governor knows that he's toast if the power goes out this Summer.
So, I walked and looked at stuff. I shot with that absolutely fun camera. It made me re-think everything I've bought and sold over the past three years. What an interesting series of odd decisions. Probably should have paused in 2018 and just enjoyed this happy format. It seems more "futuristic" than other formats. Not so much like a revised relic from the film age. Don't tell Leica I wrote that.....
Posted by Kirk, Photographer/Writer at 15:49 36 comments: