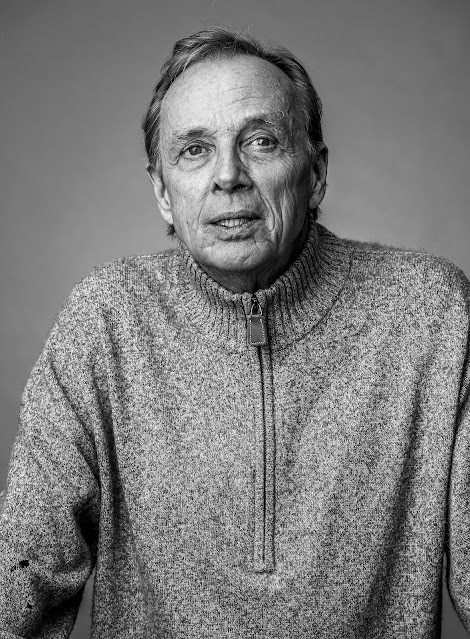 Jaston Williams.
Jaston Williams is a legend in theater. Especially in Texas where he and Joe Sears invented and starred in "Tuna Texas", a long running, hilarious send up of small town Texas. The show toured nationally to sell out crowds. And did so year after year. His college alma mater is inducting him into their version of the "hall of fame" and he needed a new portrait for the honor.

I have been photographing Jaston for at least 20 years now. We've collaborated on many projects and I seem to have become his "go to" photographer for portraits as well as show photographs and marketing. When he called I was delighted to book him as quickly as possible.

Because it was Jaston and because he respects the processes of fellow artists I decided to reach back to a different style of lighting than that I have fallen into lately. I wanted to use my big, 6 x 6 foot, double layer, white scrim as my main light source. It's flattering but also can provide a bit of lighting drama if you control the intensity of shadow on the unlit side of the face.

So, there was one strong LED fixture aimed into the center of the 6 x 6 foot scrim construction placed at a 45° angle to Jaston with my camera peeking through the front juncture between fabric and c-stand. The light is 6 feet or so behind the scrim and Jaston is about five feet from the front of it.

The camera was a Leica SL2 fitted with the 90mm f2.8 Sigma i-Series lens set to f4 and 2/3rds. The ISO was 400 and the shutter speed was 1/30th of a second. I shot with Raw+L.Jpeg and the Jpeg was set to high contrast monochrome with added contrast. It's a look I like a lot.

Recently a lot of internet "ink" has been spilt discussing the best way to get black and white images out of digital cameras. I come down firmly on the side of finding exactly the right camera for your way of working and then learning that camera with intensity, vigor and dedication and daily use. There is no "magic bullet" black and white camera on the market but having a methodology and routine will allow one to make the best use of any camera for making black and white images. Fine tune your recipe for the best results.

Now I'll let you in on the only secret I know about photographing interesting people. People like Jaston. Here it is: Invite the person into your studio but be sure you have set up all the lights, cameras, etc. beforehand. When they come into your space offer them a chair, hang up whatever wardrobe they've brought along, bring them a bottle of water or a really nice cup of coffee, and sit down in a chair across from them and catch up, socially, for half an hour or so. Don't touch the camera until you've had a good conversation, shared, listened and enjoyed the camaraderie. Only when you sense that your subject has become completely calm and at peace with the environment you've created do you move them onto the set and talk them through what you both hope to get out of the shoot.

Start photographing. Photograph a lot. If something's not working stop and change direction. Let them know when you see something you really like. Work that pose until it becomes fake and then move on again. If they brought extra stuff to wear try working with as many outfits as you can. You'll probably find one that makes the subject feel completely comfortable.

Give your subject something to lean on. A table. A posing table. Whatever. Just don't have them stand alone in the middle of a room. Untethered. Give them a home base to exist around. Anchor them. My favorites are old photographic posing tables from the 1940s, 1950s and 1960s. They provide a good place to position your subject to keep them from pacing all over the place. They provide a sturdy surface on which to place hands. They are a convenient piece of furniture to place eyeglasses on. If the lighting style calls for it they can even  be a perfect place to put a white fill card for "under the chin" reflection.

Even though the light never changed this morning and the exposure was consistent we spent about two hours together to make our portraits. The first third of the shots I could probably toss without guilt but the middle third and the last third were speckled with great poses and expressions. In the two hours we worked most of it was conversation punctuated by, "Wait, that looked perfect! Hold that for me please. A little softer smile. A bit more serious." And then back to whatever topic we had been discussing in earnest.

When Jaston left the studio I dived right into editing the images and dropped our frame count from about 422 to about 250. We had done four different wardrobe changes so maybe 60 or 70 images per shirt or sweater. I'm currently working with the black and white Jpegs but I'll make color Jpegs from the raw files so I can send Jaston the images in color first. Once he makes his choices I'll retouch and do any additional color corrections.

When he got ready to leave he (paragon of virtue...) asked if I wanted his credit card number for payment. But you know what? I had so much fun and felt so good about the shoot that I declined to be paid and instead suggested that I should pay him. After all, this is always what I really wanted to do with my art.

It takes two to tango but it's even better if you actually learn how to dance.

And that's what I did today after swim practice but before lunch. The gallery is already up. Yay. More like this.

Posted by Kirk, Photographer/Writer at 14:42 7 comments: 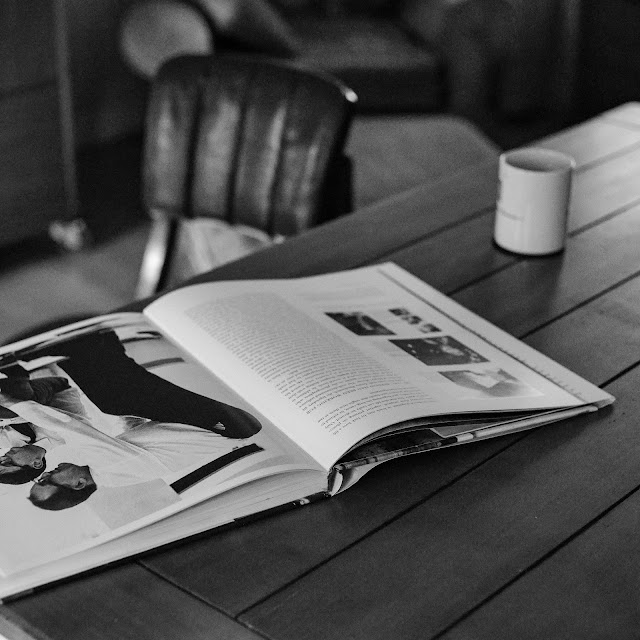 Richard Avedon book: Evidence. At my third desk. The one in the living room.
That's mostly where I browse art books... 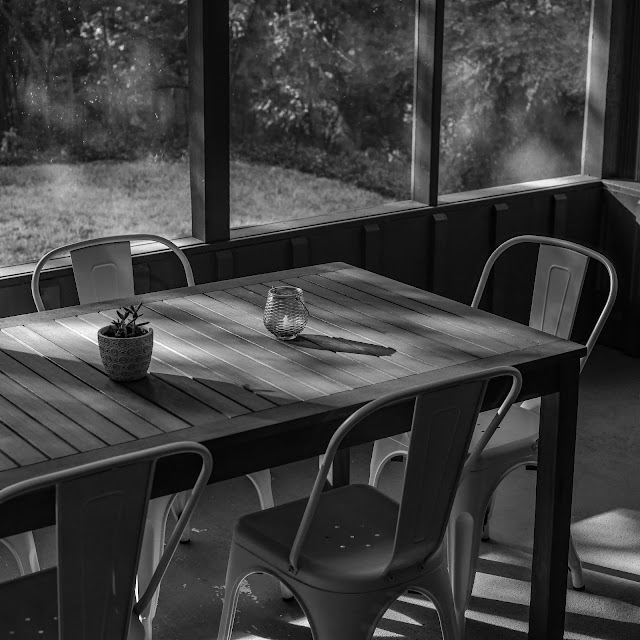 the back porch. If I were really wealthy I'd air condition it even though it's just screened in.
Then I could have breakfast out there every morning. 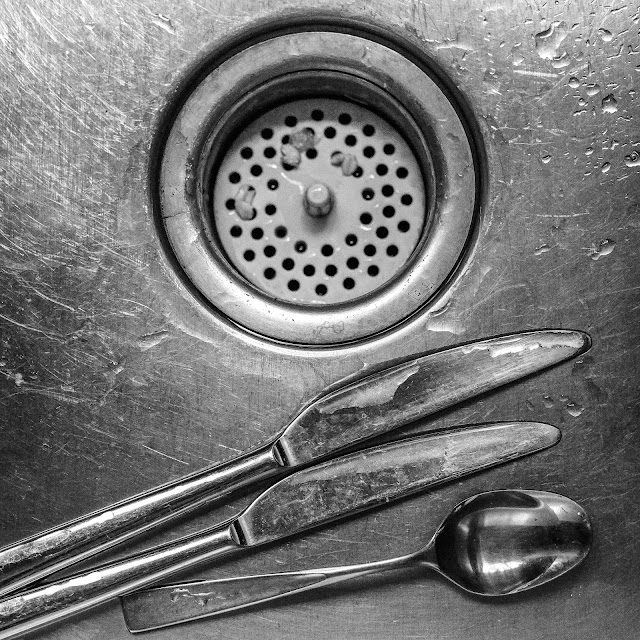 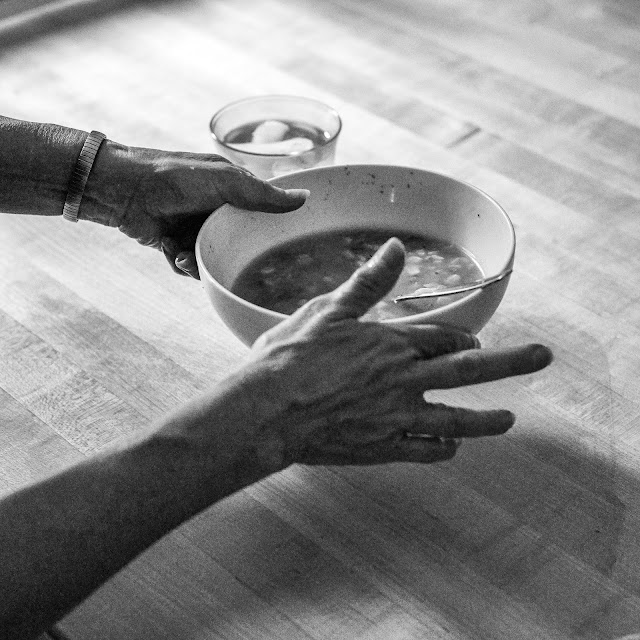 Caught this image quickly. It was hot soup. The bowl was burning her hands... almost. 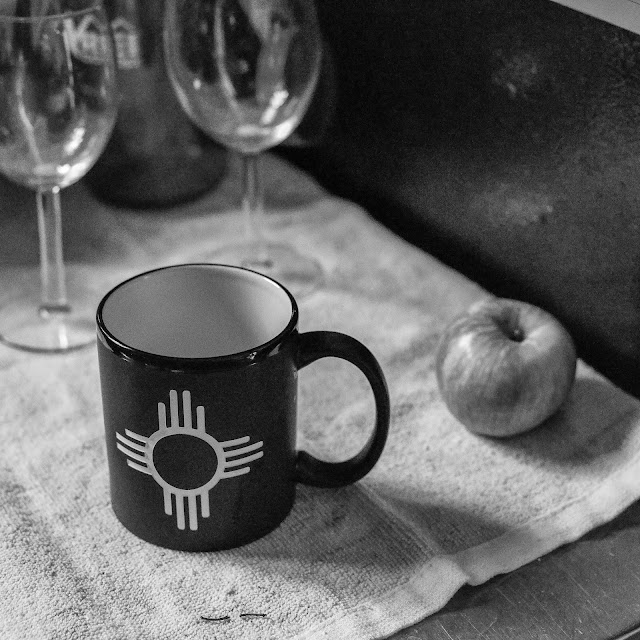 I bought two of these coffee mugs in Santa Fe in April. Lost to black and white is the lovely,
deep yellow inside the cup.... 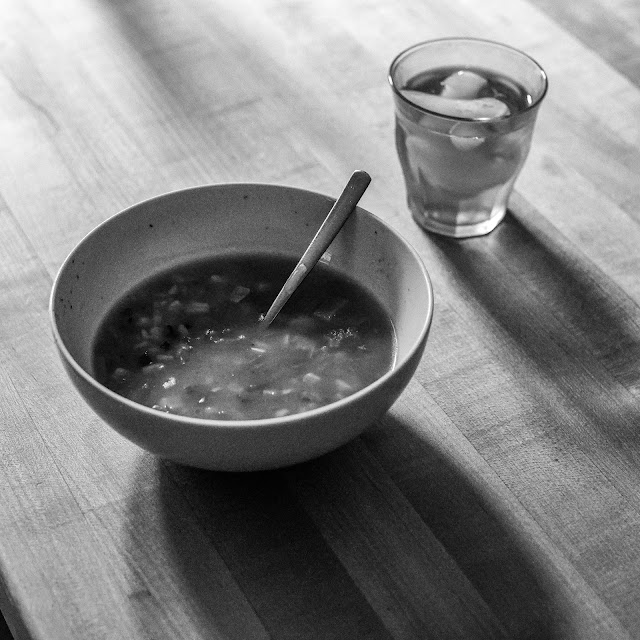 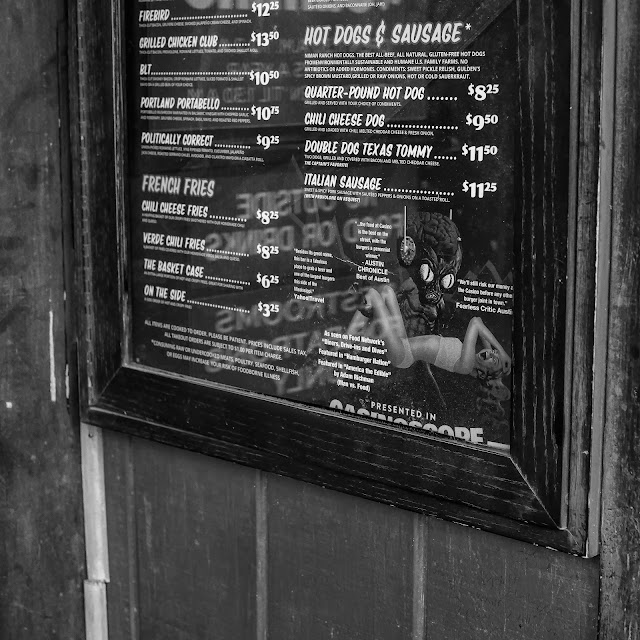 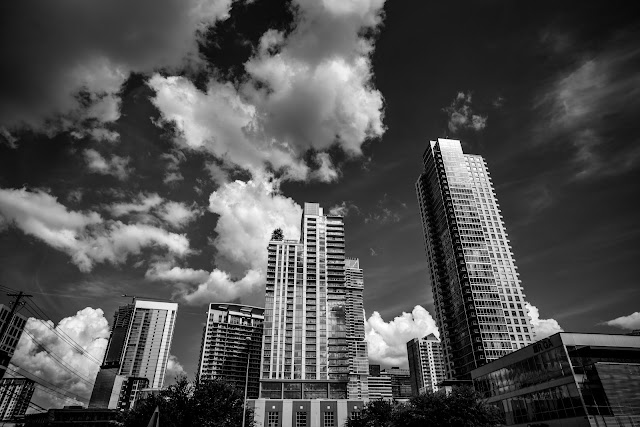 No filter needed when the Leica SL2 is set correctly.
I call this my SL2 Monochrome setting... 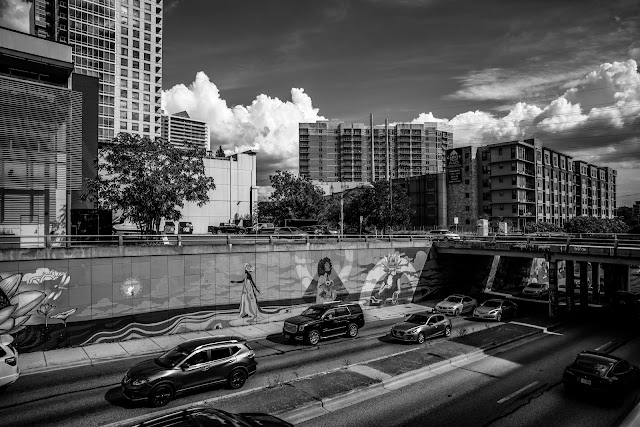 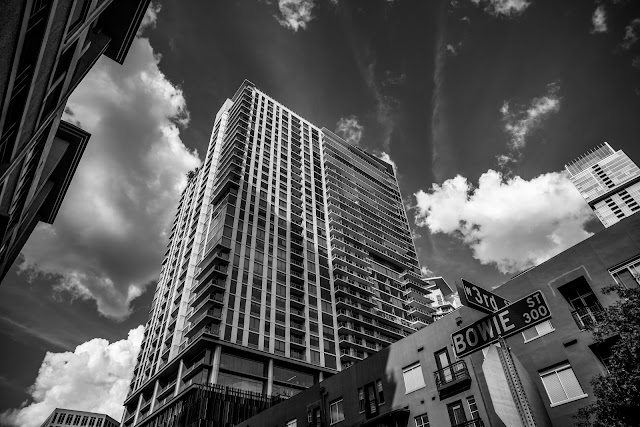 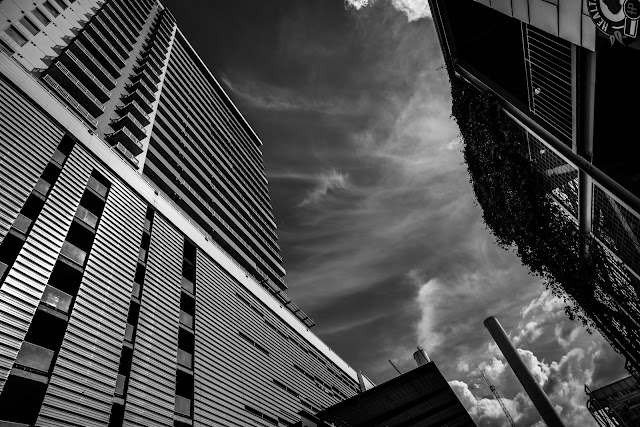 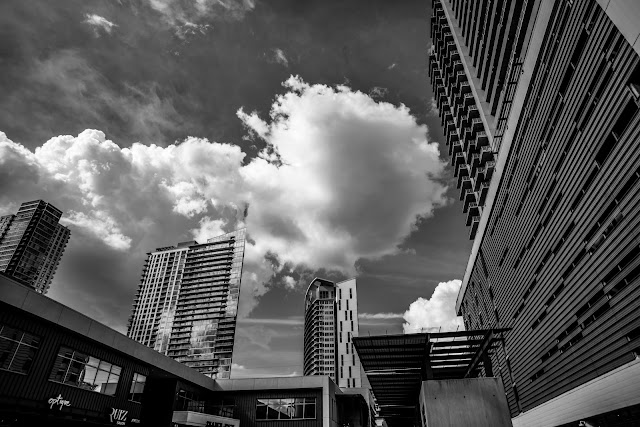 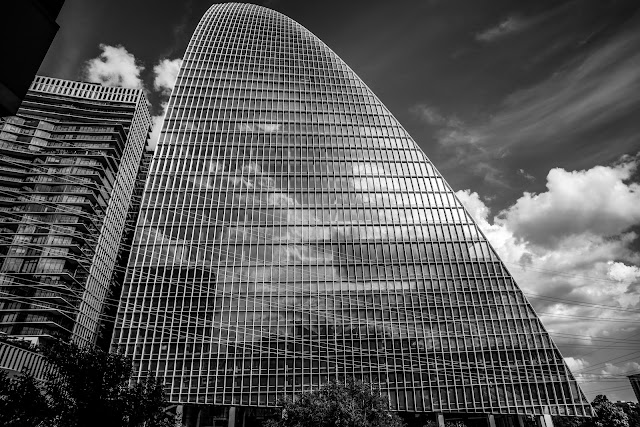 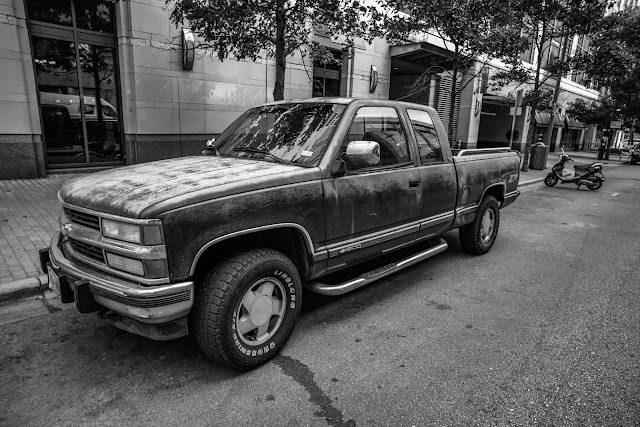 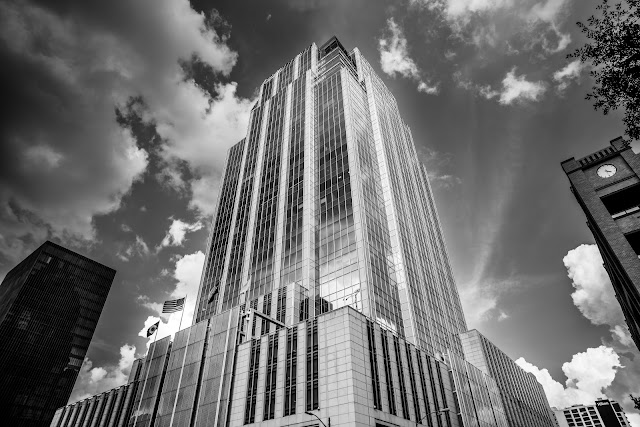 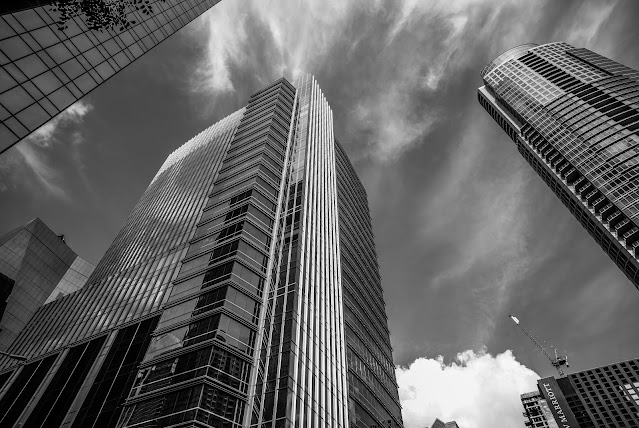 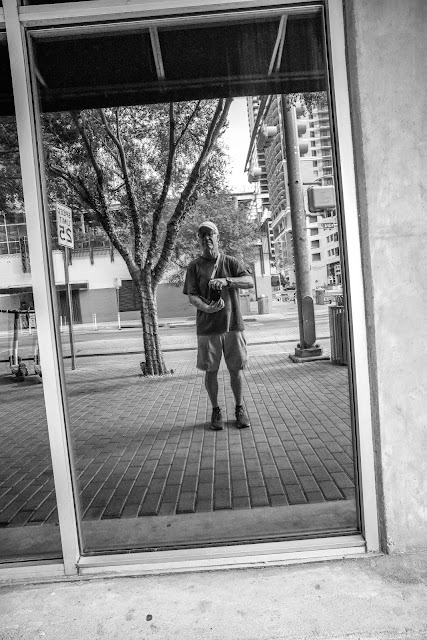 I must be losing weight. Those shorts look baggy.
some camera brands are just much, much better at making monochrome images. Some are set up to shoot black and white as a horrible afterthought.
Posted by Kirk, Photographer/Writer at 10:00 4 comments: